The Game Itself
4.5 Stars
The Video: Sizing Up the Picture
5 Stars
The Audio: Rating the Sound
5 Stars
Replay Factor
4 Stars

This game assumes the reader has played and completed Arkham Asylum. However, the review contains no major spoilers for either game.

There are very few characters in fiction as enduring as Batman. There’s something about him, the tortured soul who lives in the shadows to fight for justice, that is more compelling than the more one-dimensional Superman. And since he’s not super powered, he’s more relatable than Spider-Man. While the chances of a regular person being like Batman are low, they’re still way better than being bitten by a radioactive spider and gaining super powers. So, for a character this popular, that so many people want to be, you’d think making video games based on him would be a cinch. But that’s not the case. Most Batman games have been terrible. And then Arkham Asylum came along. Featuring an original story and most of the voice cast of the seminal Batman animated series, Arkham Asylum was the Batman game that everyone wanted. It hit every note just right. It was such a big hit that a sequel was inevitable. And now we have Arkham City, a game that ups the ante in almost every way.

Arkham City follows the events of Arkham Asylum, with half of Gotham City walled off to hold in the super criminals and their respective gangs. As the game opens, millionaire Bruce Wayne is captured by Hugo Strange, head of Arkham City, and placed into the general population. Of course, Bruce Wayne isn’t just any rich guy, he’s also Batman. Within minutes, you’re suited up and ready to take down the various criminal elements that reside in the city.

Arkham City does what very few video game sequels dare: It provides a genuinely new experience that still recalls the first game. Asylum was very contained. The premise of Batman being stuck in a madhouse meant that you pretty much could only go from one area to the next, always following your current main objective. Arkham City, as the name implies, opens things up, letting you free roam as you please. This does more than just give you a few side missions to play. It fundamentally changes the feel of the game, allowing you to shirk your responsibilities as Gotham’s main vigilante if you so choose. There are plenty of surprises tucked away in the city’s nooks and crannies, and it’s a pleasure to glide through the city using your cape and grapple claw.

When you do get around to the main story, you’ll find a strong script (written by Batman guru Paul Dini) that plausibly takes you across all of the city and gives you reason to tussle with such classic Batman villains as Two-Face, The Joker, The Riddler, The Penguin, Mr. Freeze, and more. Many of these confrontations are appropriately epic and some even make sly references to previous incarnations of the Dark Knight (a climb up a church bell tower to find the Joker is reminiscent of the first Burton Batman film, while an encounter with a shark can only be a reference to the ’66 movie with Adam West). Arkham City is as interesting to watch unfold as it is exciting to play.

The game does not offer multiplayer, but does expand its content in a few ways. First off are the additional characters. Catwoman is available as a download to anyone who buys the game new via a voucher included in the case. Her missions are interwoven into the main campaign, but poorly and haphazardly. She never feels well integrated, and even more vexing is that you have to spend precious experience points leveling her up to get the most use out of her at the expense of powering up Batman himself. I would recommend not downloading Catwoman until you’ve already down a play through of the main story.

The other additional characters, Nightwing and Robin, are available as DLC and can only be used in the challenge maps. These, like in the first game, are generally areas from the main game that are filled with enemies. You either have to take them out while accruing as many points as possible by stringing together hits and combos, or in predator challenges take them down in specific ways (such as knocking one out while obscured by a smoke pellet). These can certainly be fun, and playing as the different characters do make it a different experience, but ultimately Batman is the most effective as he has more combat options and upgrades than anyone else. And should you want to simply roam Arkham City, you can do that as well. There are plenty of Riddler trophies to find and other side missions that can all be completed after the main story has finished.

If the game has any flaw, it’s in the very openness that makes it so different from its predecessor. While Asylum is more linear, it also keeps the pressure on as aside from finding Riddler trophies (many of which aren’t accessible until late in the game anyway), there is little to do other than get to your next objective. In Arkham City, some of the tension is lost as you have dozens of little distractions to hold you up from your next objective. And as the game doesn’t put a time limit on most of its goals, it’s very easy to stop what you’re doing to go off to another part of the city entirely. Some will find this a refreshing change of pace. Others might prefer the more streamlined feel of the first game. Whichever way you feel, the fact that this is the only complaint I can level at it means that Arkham City is still a first rate game. 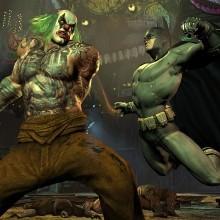 Arkham Asylum was pretty much at the cutting edge of console game graphics when it came out. In that respect, Arkham City isn’t a huge leap from its predecessor. All the characters are finely detailed. Batman’s costume is resolved in so much clarity that at least one ardent fan has already made a fully useable suit based on its design. The big difference is in the world itself, as Arkham City is a much more expansive place than the Asylum was. The last game had a few big open areas, but 95% of Arkham City is a big open area. It’s easy to travel around and simply marvel at the sights, whether it be ads, or building design, or to see how the presence of different super villains have affected different areas.

This isn’t Gotham City as you’ve known it before, either. It’s dark and dirty and often made me feel like I was playing as Batman in Escape From New York. There are plenty of easter eggs tucked away for the eagle-eyed bat-fan to spot. Everything is polished to a fine sheen. I can’t think of any technical issues I had while playing through the game twice. And just to keep things from getting boring, the developers have shown a set of replaceable skins for Batman, including such favorites as Batman Beyond, Frank Miller’s The Dark Knight, the animated series Batman, and more. Those skins should eventually be available as DLC. 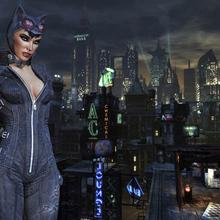 If Arkham City offers breathtaking visuals, it really comes to life through its sounds. As you progress through the game you eavesdrop on dozens of conversations between convicts, political prisoners, the game’s major villains, and other ancillary characters. There’s a great variety of dialogue, some of it quite funny. The main characters are all voiced by the same actors who played them in the last game (with the exception of Harley Quinn), and this is reported to be Mark Hamill’s last performance as The Joker. The environment also offers up a bevy of noises that help sell the world.

Arkham City may not have multiplayer but it does offer New Game Plus mode, which allows you to play the game again starting with all the upgrades you’ve accrued in your initial playthrough. This applies to both Batman and Catwoman (if you’ve downloaded her). The caveat is that the game is harder, with a wider variety of thugs in any given area. They’re also distributed differently than in the regular game, and you don’t get a visual warning when one is planning to hit you. Having played both modes, I found I got used to the added challenge very quickly, but I did have to stay on my toes to make sure I didn’t get the tar beaten out of me.

The additional upgrades do allow you to get through the game more quickly, as does the fact that you’re not experiencing it all for the first time, but there are still certain events you must trigger before you can access particular areas. Aside from this there’s also the aforementioned challenge maps that allow for additional content outside the main game. The great thing about this game is that when you play, you really feel like you’re controlling Batman. So on that level, you’ll want to keep the game around just to get that rush from time to time, even if all you’re doing is gliding around the city and occasionally dropping down to knock out some thugs. 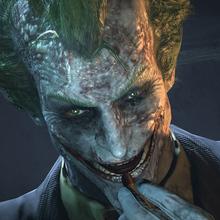 There’s hardly a poor word I can say about Arkham City. It takes everything that made Arkham Asylum great, expands upon it, and gives you a whole new gaming experience. The story, aided by pitch perfect voice performances, is strong and surprising. The gameplay itself is thoroughly satisfying, The visuals are about as good as you can get on a console, and the audio seals the deal. While some people may be slightly put off by the open world elements of the game, there’s no denying that Arkham City is one of the best games of the year and certainly one of the best games ever to feature the Batman.