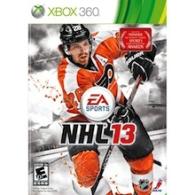 Exciting on-ice action returns to consoles with the lastest installment of EA Sports' critically acclaimed NHL series in "NHL 13." Players' hockey experience will be vastly improved by enhanced AI via EA Sports Hockey IQ as well as a more realistic approach to skating with a completely new physics based engine. The action doesn't stop at the NHL either, with teams from the AHL and Canadian Hockey league making their way into this years package. Hockey fans won't want to let this installment slip past them.