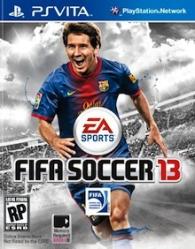 EA's bestselling soccer franchise arrives on consoles in "FIFA 13." Players can play fantasy matches as they see fit with any number of the officially licensed national teams from around the globe, as well as multiple leagues. In addition to the critically acclaimed game play, EA has brought all-new player impact physics, advanced "attacking intelligence" for computer foes, and tactical free kicks to the table. All this on-top of a full featured career mode as well as standard online play options makes, "FIFA 13" a title soccer fans will want to keep their eye on.