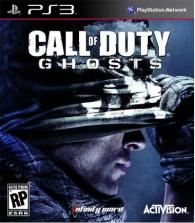 Welcome to Call of Duty: Ghosts, an extraordinary step forward for one of the largest entertainment franchises of all-time. This new chapter in the Call of Duty franchise features a fresh dynamic where players are on the side of a crippled nation fighting not for freedom, or liberty, but simply to survive.

Ten years after a devastating mass event, the nation's borders and the balance of global power have been redrawn forever. A superpower no more, its economy and government in ashes, the country's once-mighty military struggles to stave off complete collapse.

As what's left of the nation's Special Operations forces, a mysterious group known only as "Ghosts" leads the fight back against a newly emerged, technologically-superior global power.

Fueling this boldly reimagined Call of Duty universe, the franchise's ambitious new next-gen engine delivers stunning levels of immersion and performance all while maintaining the speed and fluidity of 60 frames-per-second across all platforms.