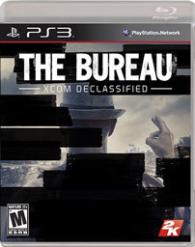 The Game Itself
3.5 Stars
The Video: Sizing Up the Picture
3.5 Stars
The Audio: Rating the Sound
3 Stars
Replay Factor
2.5 Stars
Bonus Content
1 Stars
Bottom Line
Worth a Look

In June of 2010, developer 2K Marin gave the world its first glimpse of a new XCOM game. Simply titled 'XCOM' it was unveiled as a first-person shooter, far removed from the turn-based strategy so many fans of the 'XCOM' franchise have come to know and love. Its reception from both the gaming industry and fans was mixed at best. As a potential reaction, 'XCOM' went dark for the next few years and very little was revealed about its development. That is, until April of 2013 when a significant facelift and rebranding effort delivered the new look of 'The Bureau: XCOM Declassified'.

After completely eliminating the first-person shooter aspect, 'The Bureau': XCOM Declassified' was released in August 2013. Taking place in 1962, during the height of the Cold War, you play as CIA Special Agent William Carter. The XCOM division has yet to be fully created and the very thought of an alien invasion on earth is nothing more than science fiction fantasy. Carnage ensues and as one might expect, the Soviets are the first to blame for the tragedy and destruction that slowly rages across America's idyllic towns.

After a brief tutorial introduction, you quickly realize what 2K Marin's developmental shift was focused on during the game's three-year hiatus from the public eye. The FPS gameplay mechanics have been replaced with a third person squad-based adventure. Controlling two other XCOM agents, 'The Bureau' takes some significant pointers from the immensely successful 'Mass Effect' franchise, which like 'The Bureau: XCOM Declassified' was built using the popular Unreal 3 engine. By slowing time down to a crawl and entering Focus Mode, Agent Carter is able to command his team to take cover, flank the enemy, and direct their unique class-specific abilities: Commando, Engineer, Recon, and Support. Although the mechanics of Focus Mode work well, the downside is that the other members of the team are incapable of making intelligent decisions on their own.

In true XCOM fashion, when a squad member is killed they are out of the game for good. Reviving a dying squad mate is an option but the speed at which they bleed-out can take even the best plan of attack and turn it on its head. The advancement of you and your squad's abilities is based on successfully completing a variety of main and side missions. In doing so you are utilizing the alien (referred to as The Outsiders) technology and developing the weapons and special abilities to better prepare for the challenges that lay ahead.

The weapons of 'The Bureau' range from typical 1960s military issue – pistols, sniper rifles, machine guns, and shotguns – and alien blasters, plasma cannons, and laser pistols. However, it's the class-specific training that are the most enjoyable. Much like the leveling abilities of 'XCOM: Enemy Unknown', each class has the option to select their own unique abilities. Choosing wisely results in a well rounded squad capable of infiltrating even the most secure of Outsider facilities. Some of my go-to favorites involved the deploying of turrets, levitating them for the high-ground advantage, and mind controlling a Muton (aka, Brute) to even the odds. Each ability has a cool down period that will need to be closely monitored while strategically keeping your squad out of harm's way.

Where your AI squad will often make poor decisions on their own, the enemy AI is a force to be reckoned with. They are smart, fast, and will take every opportunity to flank and corner you. Planning your moves as quickly as possible during some of the more intense fire fights significantly ratchets up the tension and gives 'The Bureau' a slight edge from other similar games that I've played. Adding enemy variety into the mix – Sectoids, Drones, Mutons, and Titans, to name a few – has the potential to disrupt even the most routine of missions - quickly taking a turn for the worse. Running in, guns blazing, is not a suggested strategy and will likely result in a failed mission and lost agents. While not as strategic as 'Enemy Unknown' the developers at 2K Marin didn't stray far from the success of that game's formula.

'The Bureau' also makes an attempt to mirror the dialogue trees and decision making of 'Mass Effect.' Although presented in a similar manner, the NPC conversations rarely result in any form of consequence and are generally nothing more than running through the list of available speaking points. While there is a good amount of conversations to be had, the interactive structure yielded nothing of interest over what a simple cut scene would have managed.

I absolutely adored the artistic choices and attention to detail 'The Bureau' delivered. There was a high level of immersion into this early 1960s time period. The XCOM agents were all clean cut, wearing thin ties, turtle neck sweaters and suspenders. Pictures of John F. Kennedy hung on the wall, and everyone was in favor of smoking – regardless of the setting. The small American towns that are the focus of many of the missions screamed 'Happy Days'. From the soda shops and corner drug stores, to the streets littered with the cars and trucks that made that era a classic, they were the towns that could only be called 'home'.

Unfortunately, the sense of immersion is often disrupted by nagging frame rate and screen-tearing issues. Whether simply walking down the street or fighting for your life, the frame rate would often slow to a crawl, making it almost impossible to accomplish even the simplest of tasks. An unfortunate side effect of any game – good or bad – it was intrusive and become an all-too common element of 'The Bureau'.

'The Bureau' provides a mediocre cast that occasionally take to over-acting. The lead character, William Carter, is a prime example. He is consistently angry, regardless of the conversation he may be involved with. His deep, gravelly voice comes off as forced and not particularly realistic, and is just good enough to get the job done. Although this is true of the majority of the supporting cast, it was more of a comical attribute of the game than a disruption.

Where the voice acting could be a bit overdone, the special sound effects - specifically the various weapons and alien technology – do a nice job of utilizing the surround sound and reinforce the notion that 'The Bureau: XCOM Declassified' is first and foremost a science fiction action game. Laser pistols deliver a notion of precision, while the harder hitting Plasma Cannon is brute force down to its core.

Still, much like the graphical hiccups, 'The Bureau' also has its share of audio problems. I recall playing a section of the game that started on the outskirts of town in an abandoned car dealership. The looped sales pitch that was pumped through the store speakers carried with me well beyond the building's location. Even after entering an alien facility, that message continued to be pushed through my rear channel speakers. It was an odd experience but one that didn't prohibit me from completing the level.

Although there are numerous conversations that you experience while playing 'The Bureau', it's not until the end of the campaign that choice and decision fully come into play. Not wanting to spoil any story elements, the option to finish the game in a variety of ways is a singular factor for replaying the game. Altering the training options of William Carter and the additional agents might be interesting enough to see how this changes your combat strategy, it's probably not enough to warrant an immediate replay of the entire game.

Bonus content is limited to additional DLC. While 'Code Breakers' appears to deliver a remaining mission for Agent Carter and his team, 'Hangar 6: R&D' allows you to play as Agent Nico DaSilva, a supporting character from the campaign. Considered a prequel to the prequel of 'XCOM: Enemy Unknown', Agent DaSilva was just interesting enough as a character to consider extending my experience of 'The Bureau.'

'The Bureau: XCOM Declassified' may have had a troubled development cycle but the changes that were made for its ultimate release were well thought out and provided for a mostly enjoyable experience. When combined with one of the more tumultuous periods in American history it delivered an interesting story that held my interest throughout. As a fairly solid single player experience, there's no question that 'The Bureau: XCOM Declassified' could have made for an enjoyable co-op campaign. Although playing with two others would completely eliminate the need for Focus Mode, it would have made for a nice alternative. Technical problems aside, it's a worthy addition to the XCOM franchise and one that should be experienced firsthand.