South Park: The Stick of Truth

Since the days of the N64, there have been 'South Park' games, and even further back there have RPGs of all kinds, but now from ashes of THQ comes what is being billed as the authentic 'South Park' expereince. With a stack of shifted release dates from publisher Ubisoft and veteran RPG developer Obsidian, comes 'South Park: The Stick of Truth.' Not since the 1999 movie have 'South Park' fans had their hopes so raised. Likewise, Obsidian fans never can tell whether or not the challenging projects taken on by the developer will end in disaster. Now though, not unlike the arrival of a big 'South Park' season premiere, it's time to see just what the 'Truth' is in this long anticipated title.

People are strange, when you're a stranger.

These lyrics, made famous by Jim Morrison and The Doors, ring especially true after the first few moments of starting up Obsidian Entertainment's 'South Park: The Stick of Truth.' Being the new kid in town, and more importantly, in the town of South Park, can be a traumatic experience for just about anyone. After creating your character's appearance from a set of fairly standard and generic options, the boy that you play as - the boy with no name and with a mysterious past - is sent out into the world of South Park to make new friends. It doesn't take long to run into the likes of Kenny, Butters, and Cartman - just a few of the immediately recognizable characters from the long-running television show – and become entangled in the ongoing war between the humans and elves. The heart of this bitter battle is the game's namesake and item of unlimited power. 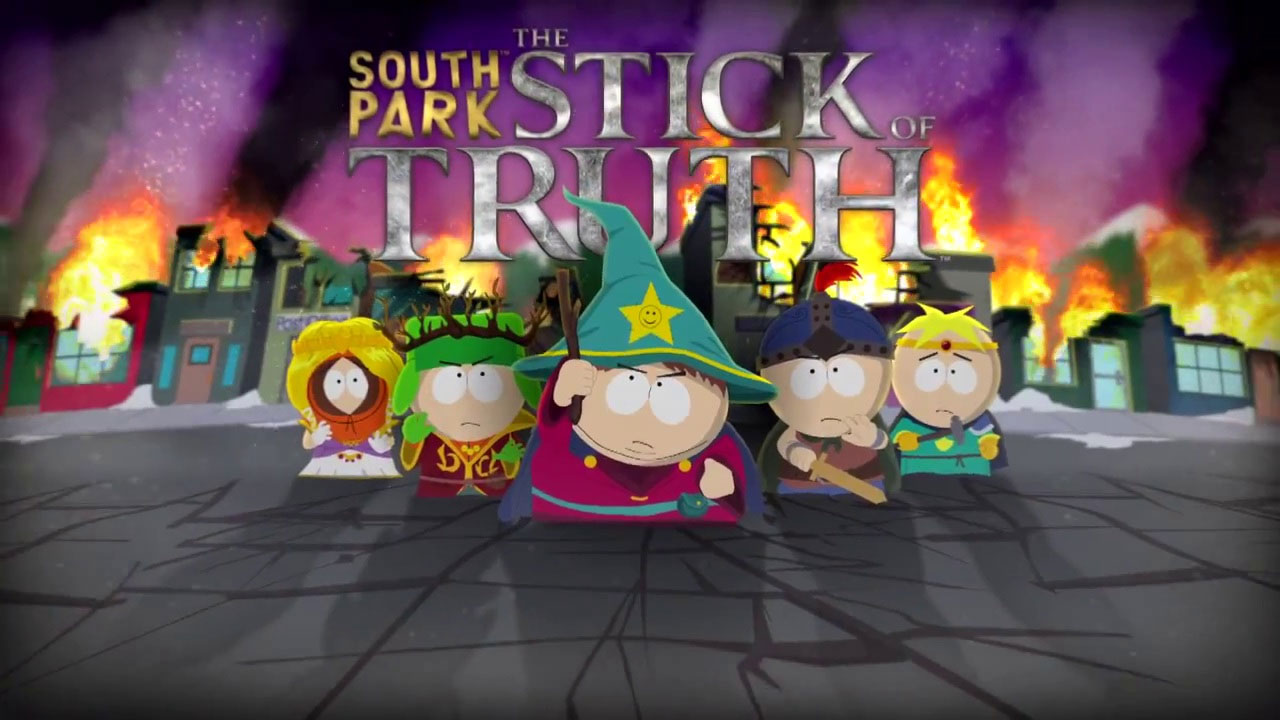 An early attack on Cartman's backyard stronghold – the Kingdom of Kupa Keep – ends with the Elves stealing the coveted stick of power. A first glance may reveal this as nothing more than children having fun with fantasy role-playing; it quickly becomes evident that 'The Stick of Truth' has a surprising amount of RPG depth and imagination. Not having a name of your own (regardless of how hard you try to create one) you are dubbed Douchebag by your new found friends and prompted, in classic RPG style, to choose your class of hero to play as: Fighter, Mage, Thief, or Jew. 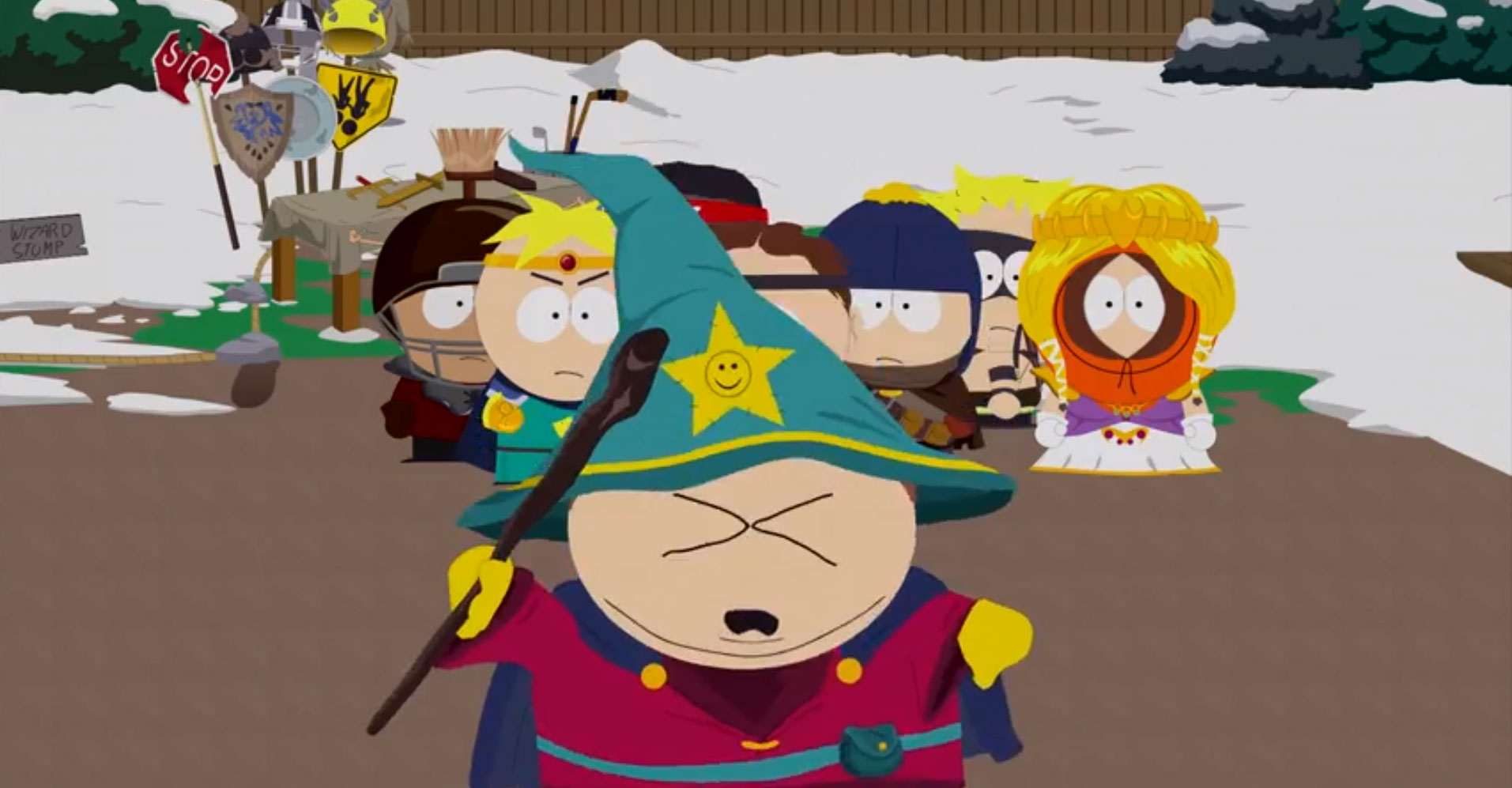 The hours of entertainment that follow result in numerous main and side quests that help to level up the character class you have chosen, as well as progress the story that inevitably becomes stranger and more comically twisted. Loot can be found in the most ridiculous of locations and scavenged from the bodies you leave in your wake: child, beast, or, . . . other. It's fairly common gameplay variety for those familiar with RPGs yet it remains simple enough for even the most novice player to quickly pick up.

Where 'The Stick of Truth' exercises large doses of restraint and accessibility with the exploration and leveling system, combat adds a bit of a twist to the more common turn-based strategy. Able to take an additional character along during your quests, they remain at your side when faced with the evils of the Elves, schoolyard bullies, Nazi Zombies, Aliens, and even the reanimated remains of aborted fetuses (this is a South Park adventure, after all). Both Douchebag and your accompanying character have their own levels of health, power (for casting spells), and manna (to weaponize flatulence), and must be consistently monitored during battle in order to survive. Although there is an AI fighting at your side, you are in control of their actions during combat, both offensively and defensively. 'The Stick of Truth' adds another layer to combat through the use of timed attacks and defensive stances, a game mechanic that takes a bit of getting used to. How well you time these events – too early, too late, or right in that sweet spot – will determine the damage you inflict or take. I'll admit that I was initially a bit thrown off by this added shade of turn-based strategy, but after the first few battles it became second nature. 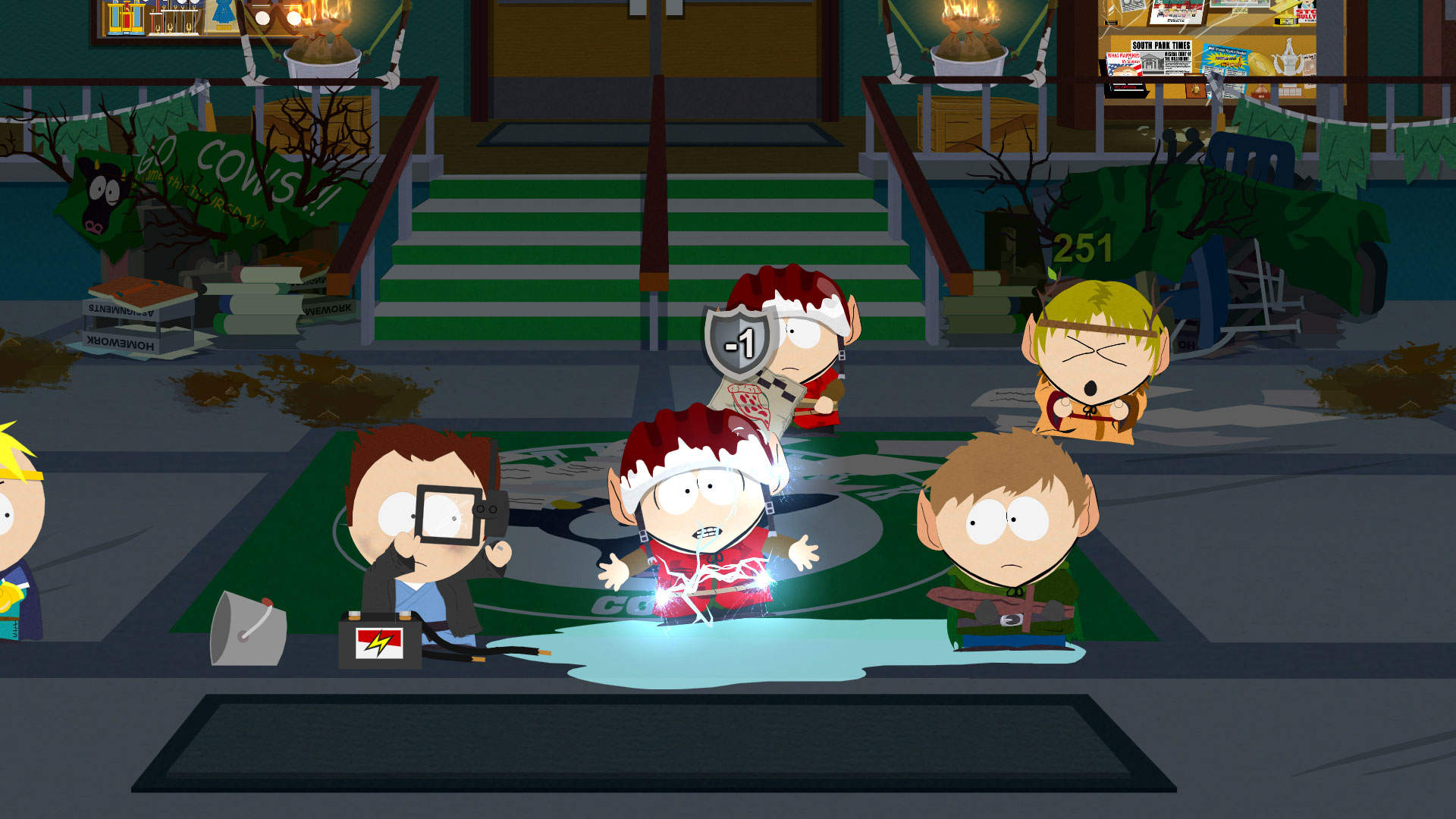 While I was pleasantly surprised at the depth of the combat and leveling system, the adventure does become somewhat repetitive by about the midway point of the game. However, what kept me going, what prompted me to seek out more and more quests, was the over-the-top humor employed by 'South Park' creators Matt Stone and Trey Parker, who oversaw development, wrote the script, and provided the voice-over work. Although child-like in nature, 'The Stick of Truth' could not be any further from a child's video game. Casual fans and newcomers of the show (as I count myself to be) should be aware of the very mature content. A high level of gross-out behavior, when mixed with an unending stream of profanity and over-the-top outrageousness, makes this a game absolutely unsuitable for children to play or watch. Generally not affected by this, my thick skin was occasionally penetrated by the brash humor and in-your-face raunchiness of the game's writing. Parents and those easily offended, you have been warned.

'The Stick of Truth' probably isn't the game to show off as being a graphical powerhouse. There are plenty of others out there that can fill those shoes. However, it's hard not to appreciate the attention to detail the developers at Obsidian Entertainment put into this title. I've played more than my share of licensed video games over the years. Some have been quite good in their ability to bring a movie to the video game medium, while others have failed miserably, making it even more difficult for gamers to take licensed video games seriously. I'm happy to say that 'The Stick of Truth' is the real deal. 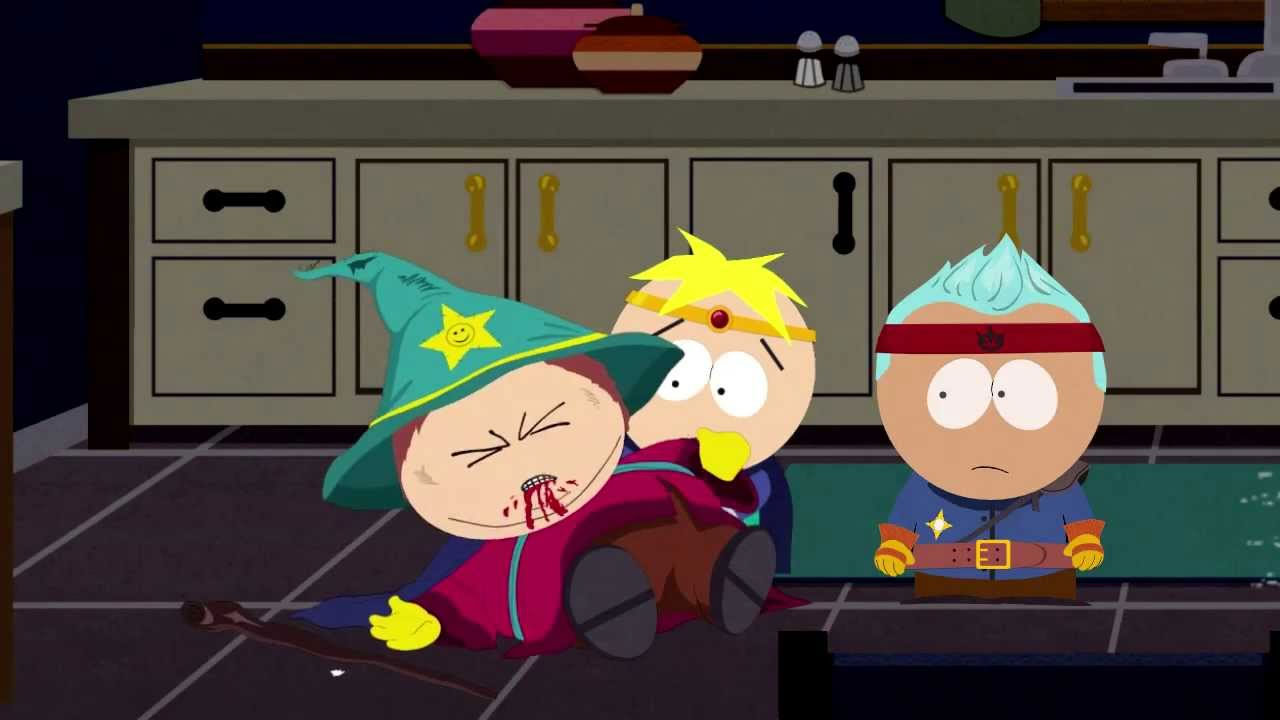 As an open world (or as open as the town of South Park can accommodate for), 'The Stick of Truth' is sure to satisfy even the most faithful and die-hard fans of the show. The places, the characters, and the creator's imagination are all lovingly rendered to present an experience that goes well beyond paying homage to the television show. It's likely you'll forget that you're actually playing a video game and not watching an extended version of any one of your favorite episodes.

Although Obsidian Entertainment may have acquired a reputation for developing games plagued with bugs and problems, I only experienced an occasional frame rate slowdown while traversing the streets of South Park. I was bracing myself for the worst and was surprised by a generally pleasant and solidly performing game. However, I may very well be in the minority as there have been numerous reports across the social media landscape of much more significant bugs and even game ending problems. 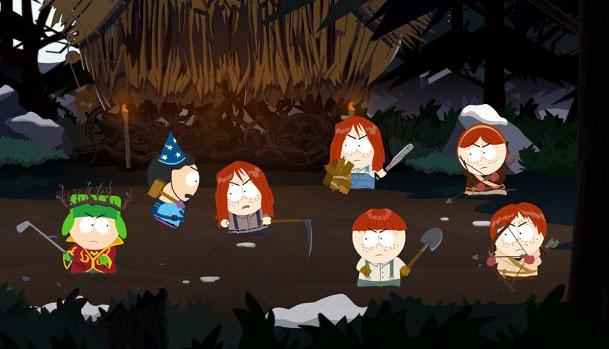 Much like my impressions on the video, the audio of 'The Stick of Truth' doesn't stand out, at least not from a technical perspective. Everything is evenly balanced and nicely represented. The frequent battles tend to re-use the same sound effects, but it won't be difficult to overlook this the further you get into the story.

The script and voice-over work continues to be the real highlight of the game, and a determining factor with how well the title transitioned from television show to video game. While some of the music came directly from the series, it was nice to hear an original (and humorous) mix of epic fantasy backed by a choir built from the in-game characters.

As much fun as I had playing 'The Stick of Truth' it's hard for me to make a strong recommendation for replay. One might assume that as a fantasy RPG – even when it involves the town of South Park – the option to play as a variety of classes would be enough to immediately jump back into the game. The initial creation of your character gives the impression that weapons, armor, and spells are unique to each class; for example, my starting mage character was denied a request to select a sword as a weapon. Yet, later in the game, as my character's level increased, along with the amount of loot discovered, I seemed to be able to equip just about anything that I stumbled upon. Adding to this the repetitive nature of the combat system and limited amount of side quests, it's unlikely you'll find a reason to replay 'The Stick of Truth' without a reasonable break in between. 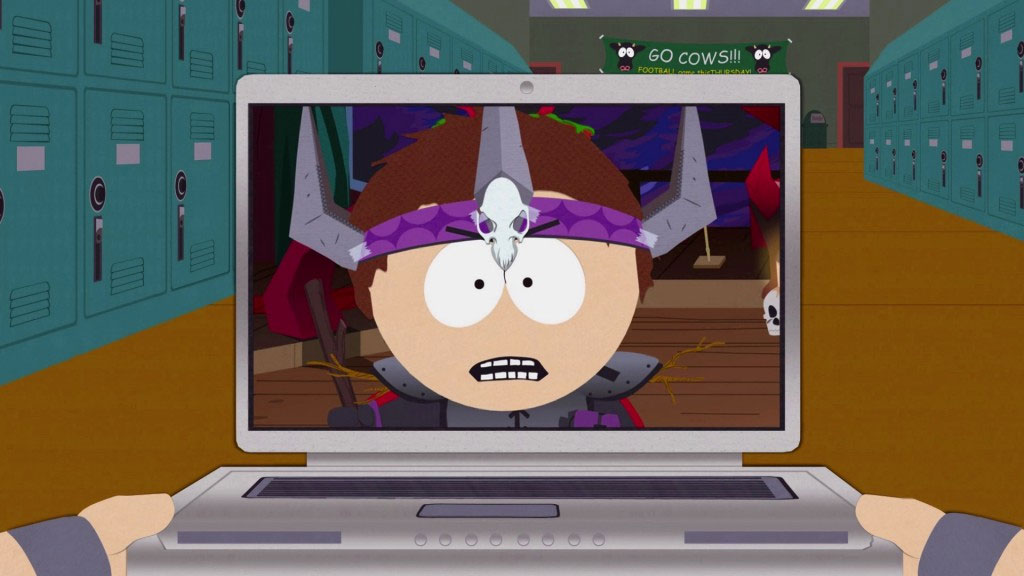 'The Ultimate Fellowship Pack' came as pre-order bonus for 'The Stick of Truth' in the form of a download code. The pack includes: Necromancer Sorcerer with bonus fire damage, Ranger Elf with bonus weapon damage, the Holy Defender with bonus defenses, and the Rogue Assassin.

While I am admittedly new to the characters and ongoing story of 'South Park', I've seen enough episodes of the television series to prepare myself for the outrageous antics that 'The Stick of Truth' was capable in delivering. For a series that prides itself on gross-out humor, strong language, and inappropriate comedy on a variety of levels, the game delivered a solid RPG experience that was quite enjoyable from start to finish. Although the very mature content forced me to be on the constant lookout for inquisitive eyes (my 8 and 9-year old daughters) while playing the game, the solid game mechanics, hysterical performances, and environmental . . . um . . . variety (if you've played it you'll understand), kept me engaged and interested throughout. Newcomers and loyal fans alike will find plenty of reasons to search for 'The Stick of Truth'.