Giant bugs, giant robots, screaming hoards fleeing in terror, and brave, faceless soldiers marching into the heat of an intergalactic threat against Earth.  Fans of the 'Earth Defense Force' series likely have a big smile across their face at the thought of another journey into one of the least polished, yet infinitely entertaining game series in recent memory.  'Earth Defense Force 2025' (or 'Earth Defense Force 4' as it was known in Japan) arrives more than a half year after its initial release on US shores and serves as the first entry in the main series since 2006’s 'Earth Defense Force 2017.' One again into the breach... to fight the giant invading insects.

Though it's been a long time since the last proper 'Earth Defense Force' title, 'Earth Defense Force 2025,' not a lot has changed since then, perhaps for both better and worse.  For the uninitiated, this means eyebrow raising graphics and a general disregard for physics, all wrapped up into a nice tidy package of straightforward, guns-a-blazing, third-person action mayhem.  Added to the mix is a bigger swatch of vehicles, including mechs that in some cases require multiple players to fully utilize, hundreds of different weapons, and 80+ missions that range from your straightforward giant insect extermination to epic battles with gigantic dragons.  In short, 'EDF 2025' offers what is so often missing from many A-list titles these days: a sense of true fun. 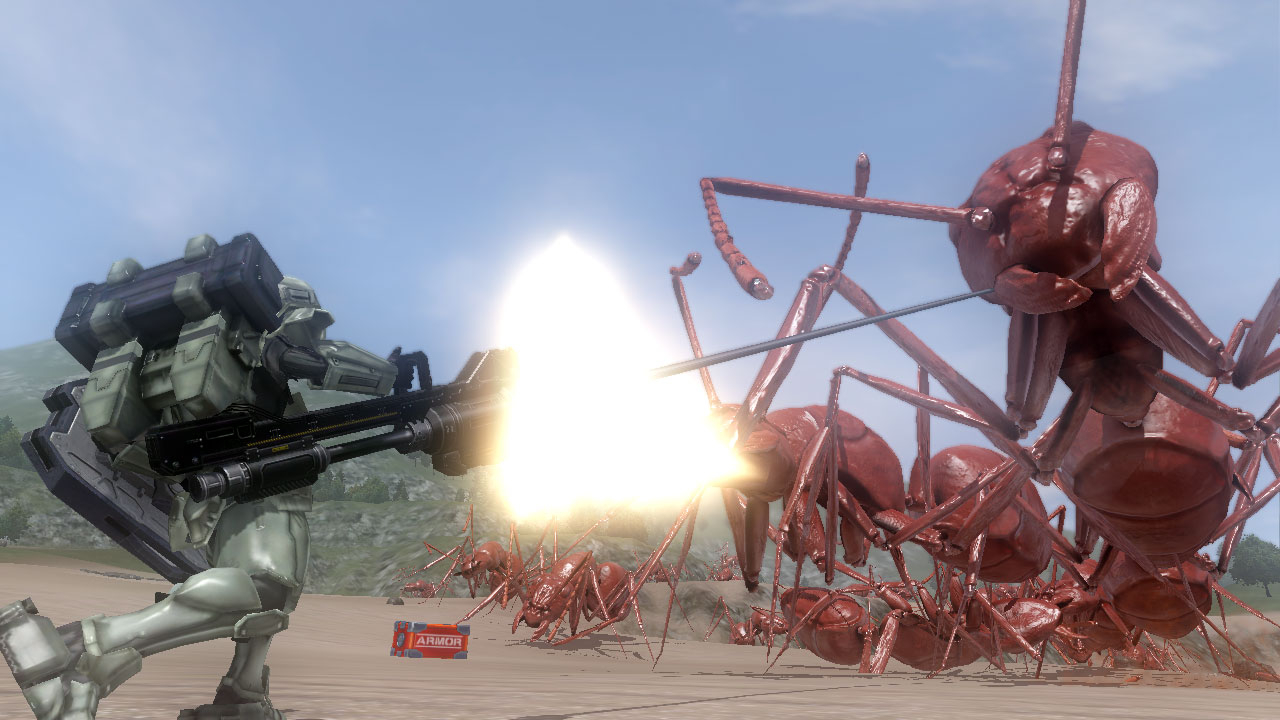 'EDF 2025' doesn’t revolutionize gaming in even the slightest way.  At its core, it’s a third-person shooter that draws heavily on b-movie sensibilities.  The plot boils down to little more than eight years after fending off an attack by the Ravagers, the EDF is called into action yet again to destroy a horde of giant insects that have mysteriously re-appeared to wreak havoc on a metropolitan area.  From there players are thrown into battle and allowed to choose from one of four player classes: the Ranger, a straightforward soldier class, the Wing Diver, an all female class who unleash aerial based combat against foes, the Air Raider, a support style class that can summon heavy strikes as well as bring in vehicles and deploy health boosts, and finally, the Fencers, a bulky tank-like class that the game recommends only to more skilled players.  Each class features a customizable load out that expands not only the more you play the game and acquire weapon drops throughout the levels, but also as you amp up the difficulty to any of the four basic levels. 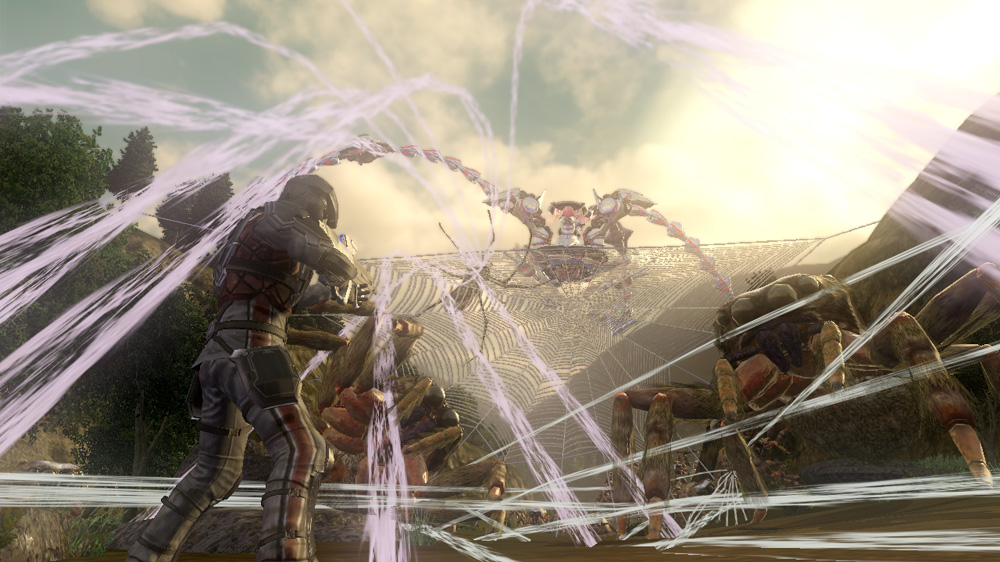 The game does get off to a rocky start with a set of a dozen or more levels that feel like an extended, dull tutorial; add in the plague of generally cumbersome loading times (there’s a load screen before a disposable intro cinematic and then another before actual gameplay) that will become your bane upon failed attempts at missions and you have a recipe for driving away new gamers.  Once you break the 90-minute mark or so, the action amps up and the variety of enemies and ways to dispatch them increase sizably.  All this takes place in a world built on wonky physics that I fully expect exist only to support the large number of enemies on the screen that incessantly press forward.  Once one just learns to live with this fact, 'EDF 2025' offers a reasonably solid exercise in non-stop giant insect exterminating action. 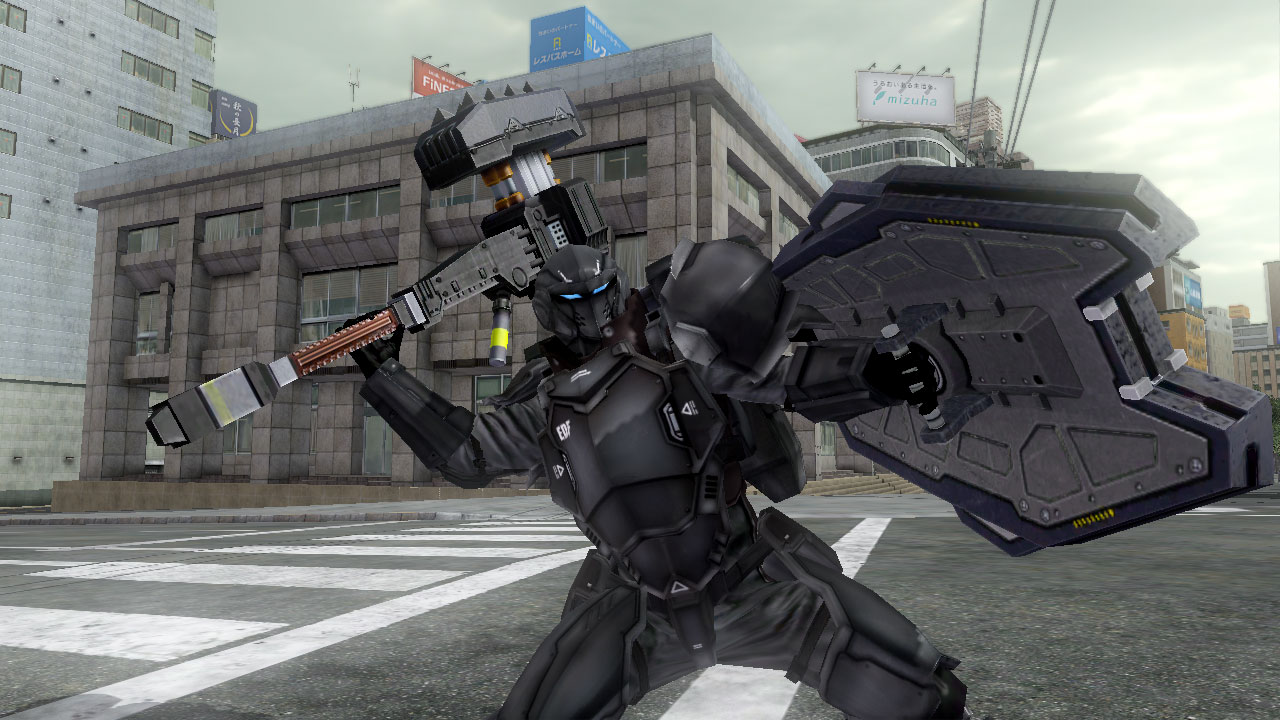 The main campaign can be tackled either solo or co-op (split-screen or online, your preference) and a versus mode that is best left alone, as it serves only as a tacked-on disappointment.  Fortunately, the campaign itself has a lot to offer, 80-plus missions in all and if you’re lucky enough to get the right group together, at minimum, the back 40-50 should fill not only a visceral action quota, but a genuine fun one as well.  'EDF 2025' gets all the basics of truly good spirited gaming right and as a result, all of its technical shortcomings are easy to overlook.  It’s as if someone took the best elements of every direct-to-video b-movie sci-fi action films of the 80s and 90s and perfectly adapted it to video game form, complete with poor production design and a healthy share of leaps in logic; truly, time well spent. 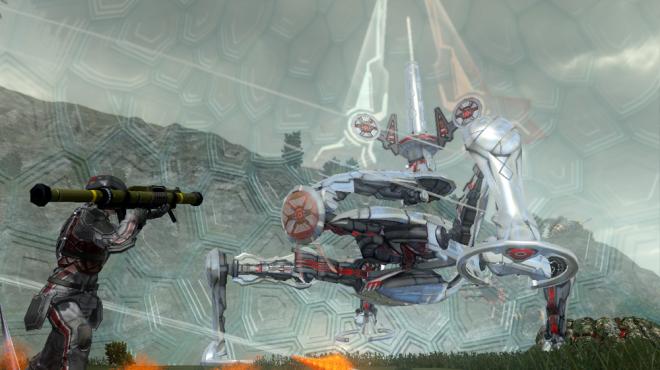 Sadly, the A/V department is where 'EDF 2025' earns its most deserved criticism.  As wonky as the physics of the core game may be, visually, 'EDF 2025' is an absolute eyesore.  From character models to even worse environments, 'EDF 2025' is a very visually anemic game.  Character models are the game’s strongest suits, but even then, I’d argue they are anything but mediocre compared to even the most average previous generation title.  Environments are bland and repetitive, with texture pop in a huge issue as you traverse the wide expanses.  Animations are equally limited with destruction damage following a set formula and the game engine itself does no favors.  Despite all these negatives, there’s a level of charm present that sends the message of the developers being more concerned of producing a competently 'fun' but ugly experience, than a visually mind-blowing exercise in tedium. 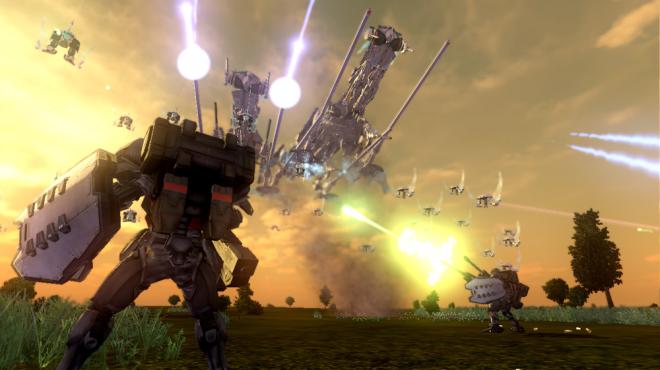 On the sound front, 'EDF 2025' exceeds the visuals by a few notches, but not much.  Effects are the definition of canned and as repetitive as many other aspects in the game.  Voice acting is laughable to the point of enjoyment, while the amateurish score eventually becomes white noise amidst the chaos of hunting giant insects.  There’s also not much to the depth of the audio presentation and even with a solid surround system, don’t expect much in terms of immersion.  Again, as with the visuals, I contest the glaringly mediocre quality is balanced at a level that makes the whole whacky experience of the game all the more delightful.

If one makes it through 'EDF 2025’s' initial campaign as the dullest of all the classes, Ranger, then repeat experiences have a lot to offer.  Achievement hunters will be either in Heaven or Hell depending on how much time they are willing to invest, but to get the full 'EDF 2025' experience, one has four classes to play through the game’s 80+ missions, a co-op experience, and the respectable versus mode.  Add to that multiple difficulty levels to go through and you’re looking at a game that may ask 100+ hours of investment to complete 100%.  The good thing is it’s a fun game, it’s decidedly ugly looking at times and the entire game play feels basic compared to similar genre entries, but it accomplishes what it advertises without major fault, offering a great experience for one to four gamers. 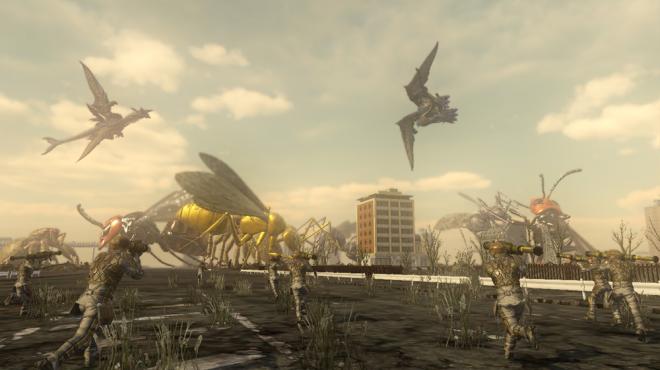 'Earth Defense Force 2025' might not be the best looking, sounding or in some cases, playing game out there, but it’s a definite breath of fresh air in an era of gaming hung up on being overly serious.  If the idea of fighting giant insects and robots appeals to you and in the process, you’d like to do so with a few friends, 'EDF 2025' is going to scratch that itch for a long time.  It’s a very lengthy game with enough variety and general sense of fun to keep you coming back for either short bursts or long journeys, depending on your mood at the time.  There’s not a chance this is going to be a contender for any Game of the Year awards, but it’s still a worthy, stalwart addition to your collection.