The Game Itself
4 Stars
The Video: Sizing Up the Picture
3.5 Stars
The Audio: Rating the Sound
4 Stars
Replay Factor
5 Stars
Bottom Line
Recommended

Heroes of the Storm

PC version reviewed. 'Heroes of the Storm' is a f2p title.

'Heroes of the Storm' started life in 2010 as simply 'Blizzard Dota', a custom MOBA map for 'Starcraft II: Wings of Liberty'. After a trademark dispute in 2011 it was rechristened 'Blizzard All-Stars', with significant development beginning in 2012. An alpha period began in the spring of 2014, followed by a large closed beta in January of this year, an open beta a few weeks ago, and finally full release. You can read our coverage of the open beta here, and it includes a bit more discussion of the mechanics and history of the MOBA genre.

Blizzard’s PR team has been hard at work separating 'Heroes' from the firmly established and highly competitive MOBA community, particularly 'LoL' ('League of Legends') and 'DotA' ('Defense of the Ancients'). It is true that 'Heroes' significantly differs from other MOBAs in many ways, but a rose by any other name smells just as sweet. It has lanes, turrets, champions, creeps, microtransactions, and all manner of other MOBA things.

Each match of 'Heroes' follows the same objective, no matter the map: destroy the opposing team’s core. The core is a shielded, armed monument that sits next to its team’s respawn point, which is an invulnerable platform where heroes can quickly regenerate health and mana. Minions creep down each of the three lanes towards the other base, and in between lanes there are mercenaries and objectives hiding in the jungle. The jungle is where a lot of the fun happens. Teams that understand what they are doing will rush each objective when it appears, like collecting a tribute before the opposing team, or playing king of the hill on a magical Egyptian laser platform. These heroes will collide with enemy heroes doing the same thing, and an explosive team fight will break out. 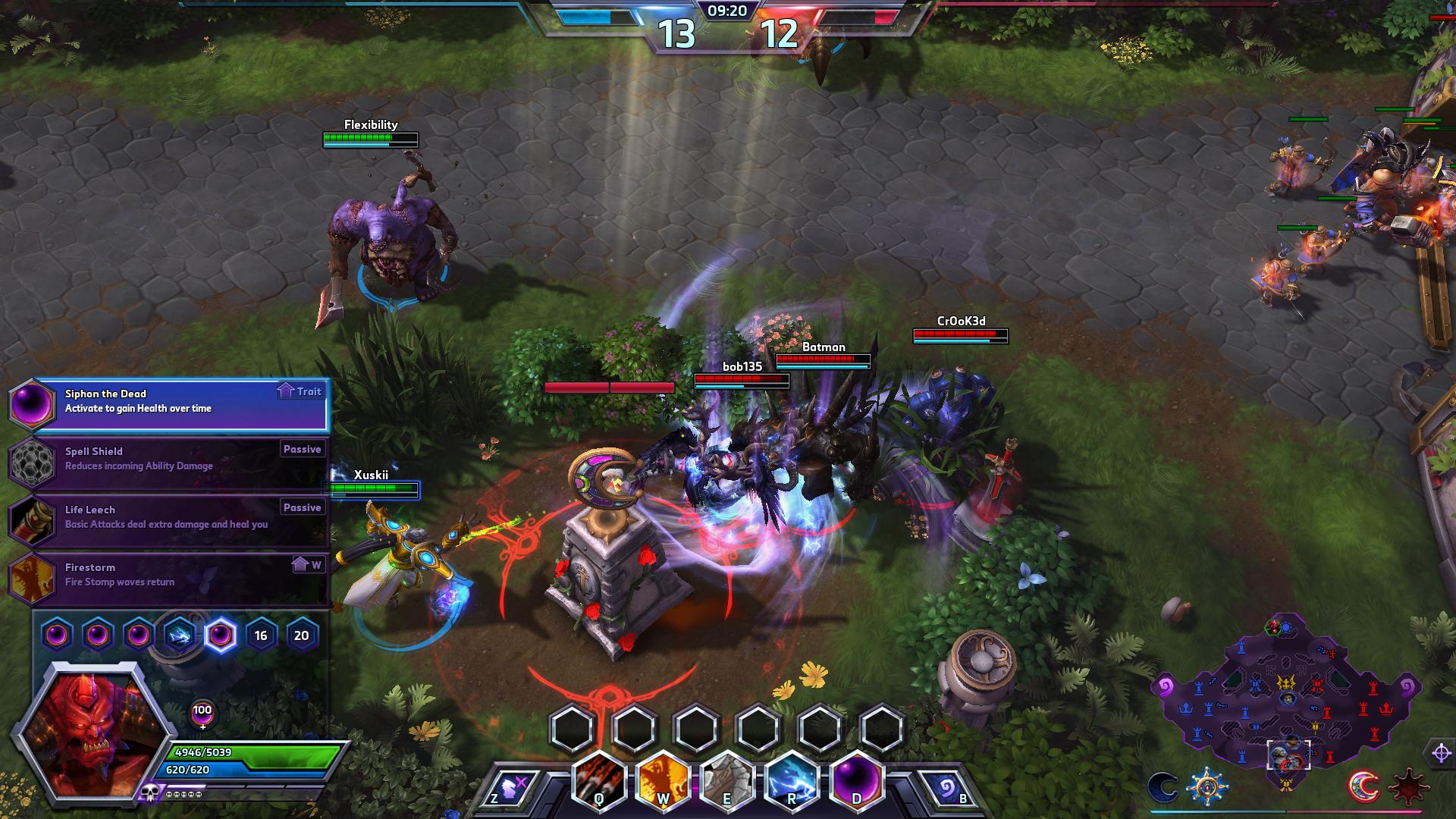 A team fields five heroes, made up of assassins, supports, warriors, and specialists. Each class has a specific playstyle (except for specialists, as their name might suggest), as does each hero within that class. Anub'arak is a huge scarab beetle warrior with a bit less tank than his brothers, for instance. He excels at crowd control, stunning enemy heroes so that the assassins can land the kill. Stitches is also a warrior, but his slow speed and lack of movement abilities makes him less appealing for initiating team fights. Instead, his hook ability lets him snatch up heroes and deposit them in the midst of his own team. The heroes are, by and large, well balanced. There are only a few that are overpowered or real stinkers. 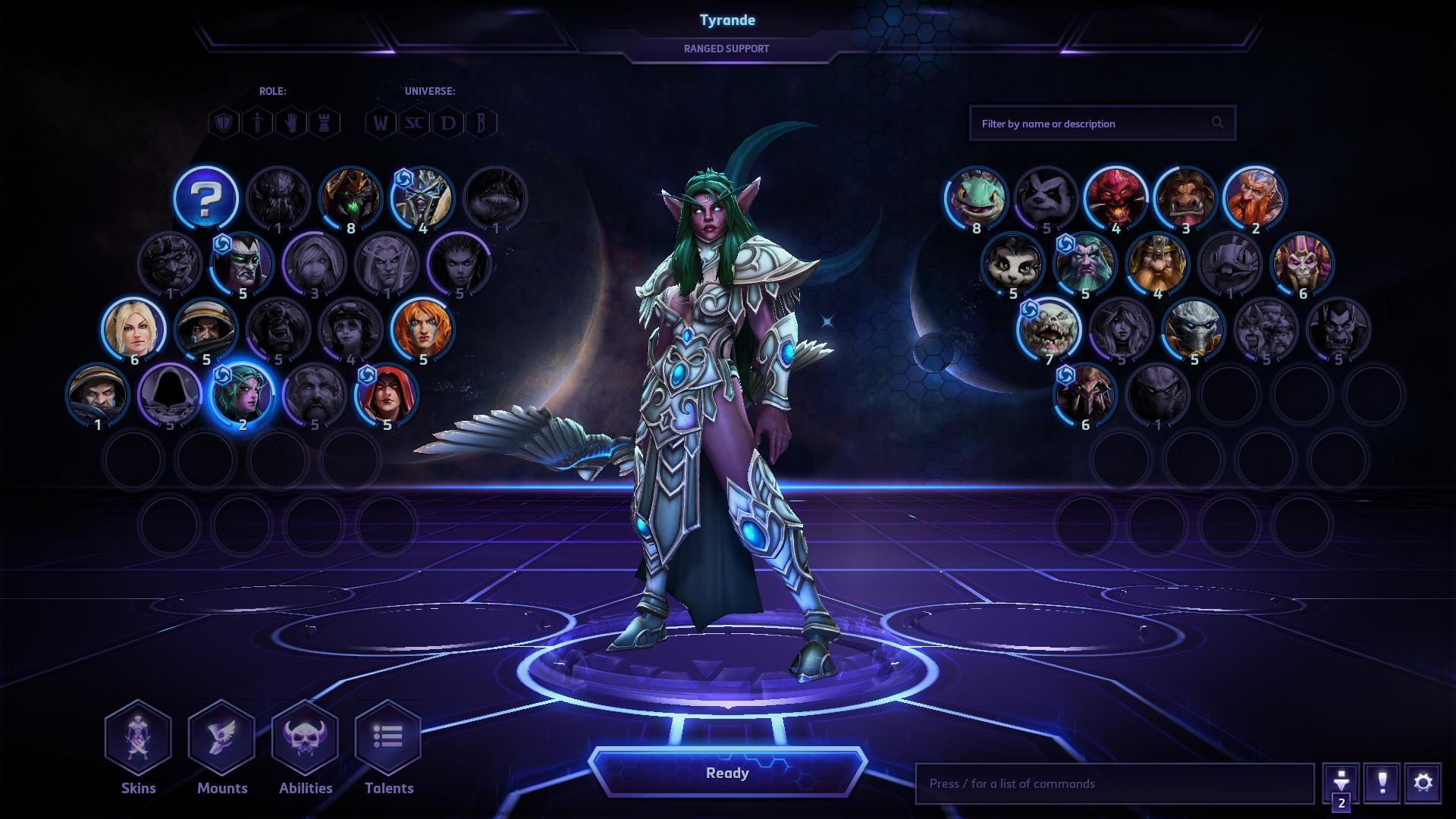 During the match, teams gain experience collectively by being near enemy minions and heroes who die, with hero kills naturally bringing in a lot more. At every 3 or 4 levels, heroes can purchase a new talent and build their hero towards a specific goal. Tassadar is a support hero who assists his teammates by granting them shields. He can make a shield build to dramatically increase their survivability, or develop a damage build that puts him in the assassin camp. The latter is especially suitable if he is not the only support on the team. This character building system is a key point of the strategy in 'Heroes', and experienced players tend to build their characters in ways that complement their team. 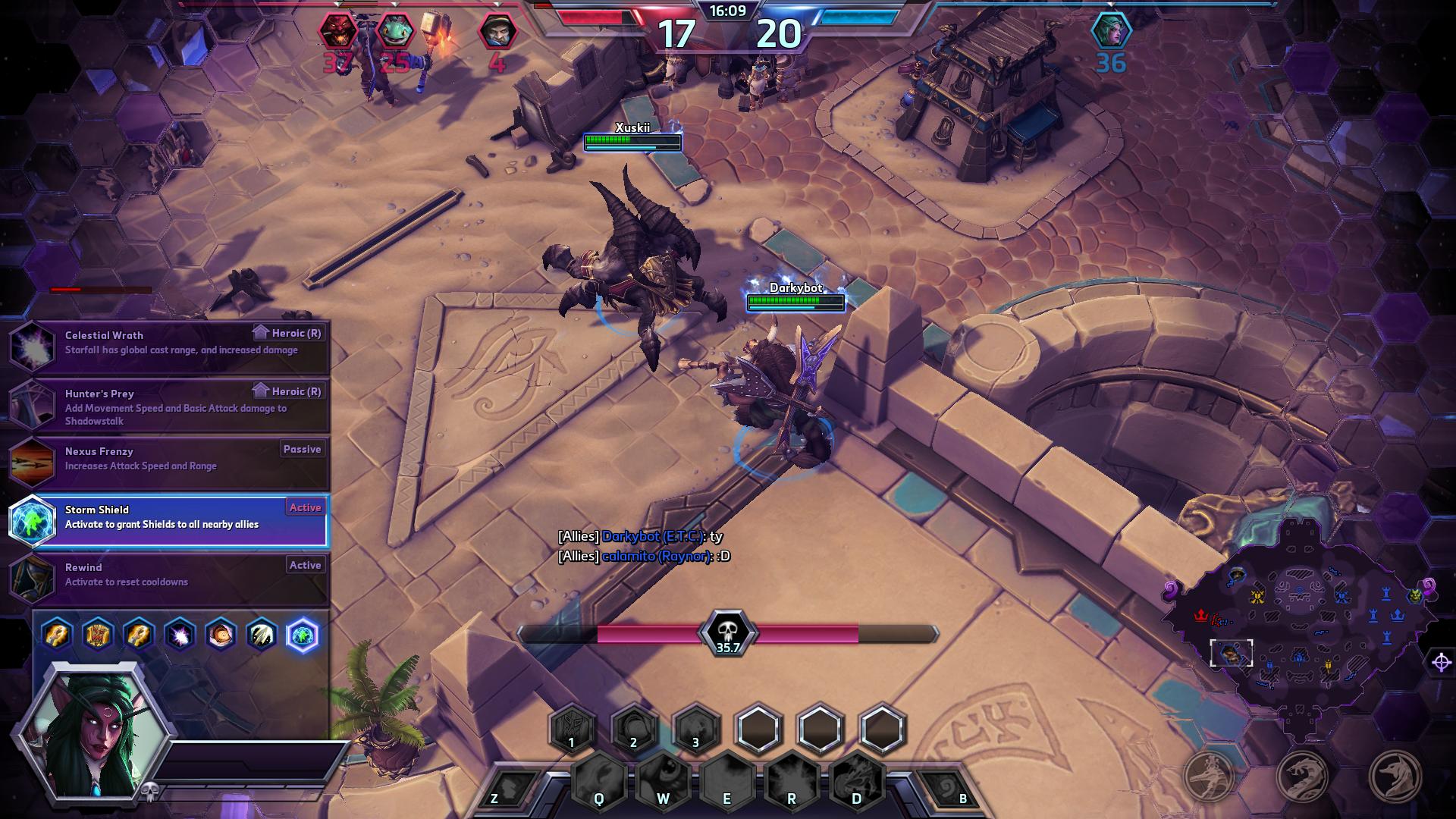 'Heroes' has been characterized as "casual" by some elitists within the notoriously unfriendly MOBA community. I like to consider it "accessible". It does have lighter MOBA elements - matches are only around 20 minutes, there’s no in-game inventory, takedowns are communal, deaths are common and, until the latter parts of a match, respawns are not overly long. However, I think it will turn out to be quite competitive, with lots of tournaments, streaming, professional esports and the like. I would not describe the playerbase as toxic, although of course there are always bad apples (they are easily muted). The game focuses more on team fights than many MOBAs and has a violent, fun, arcade-like mentality, with some wacky heroes like the Lost Vikings, who can be split into three separate, individually controlled heroes. One of my favorite parts about 'Heroes' is that a match can be won or lost at any moment. What I mean is that having a great team fighting performance does not guarantee victory - clever teams can manipulate the map in such a way that they sneakily bring down the core, even if they’ve spent the last 20 minutes being abused. This might be a sticking point among more serious players, but it also serves as an incentive to develop map awareness and try unorthodox tactics.

The monetization system hasn’t changed since the beta. Seven heroes from a rotating menu are available for free every week, and all other heroes must be purchased with real or in-game money. In-game money is earned relatively quickly in the first 20 hours or so of play, after which it peters off to a slow trickle. Meticulous daily questing and hero leveling can offset this, but on the whole 'Heroes' has a moderately lower champion-per-hour rate than many of its peers. Also, matchmaking isn’t the best. Most matches tend to be quite one-sided, which makes the victory-stealing mentioned above more palatable. 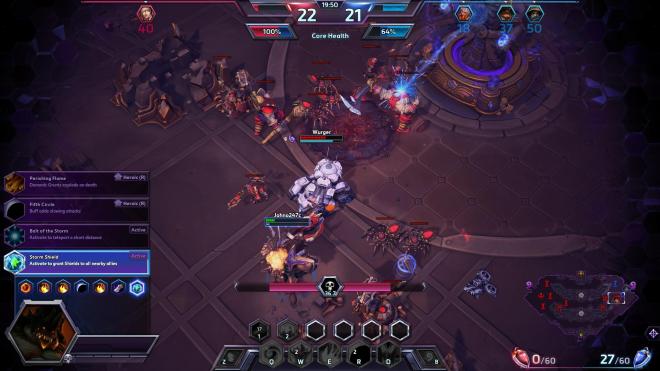 Little has changed in the last few months in terms of the visual quality. It looks and responds a lot like 'Starcraft II', but performs very nicely and maintains a high framerate. Character modeling has a similar style to other Blizzard works, such as the interestingly proportioned heavy armor of Tychus and Raynor and the slick, reptilian/insectoid flesh of Zerg heroes. For the less social gamers who ignore team chat, communication is still easy via pings and the minimap. 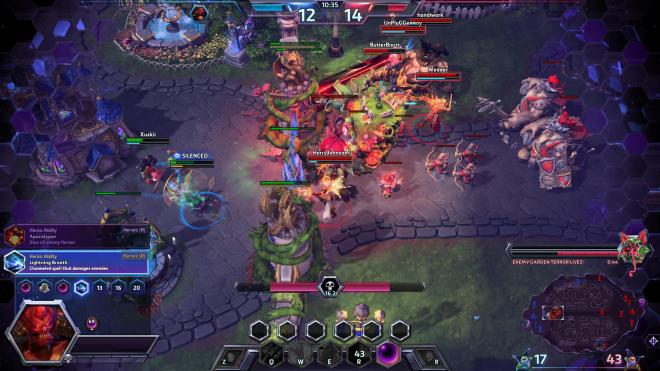 Like the gameplay, the audio of 'Heroes' has a distinctly light, arcade feel. Headlines flash across the screen with pizzazz whenever the player scores a kill or earns a killstreak. Characters have hammy, trolly taglines they spout off at every opportunity. Many voice actors return from Blizzard’s other properties, like Raynor and Abathur. The music tends to match the theme of the map, and is decent enough but often heard only in the menu.

Because there are free heroes every week and seven maps (with the promise of more to come) with different geography and objectives, not to mention an endless assortment of talents and builds for each team roster, 'Heroes' has stout replayability. Player levels, hero levels, daily quests, and the option to go against AI or human opponents also help. For the more serious players, league play is available at level 30, and team league at 40. These matches are ranked and in draft format. 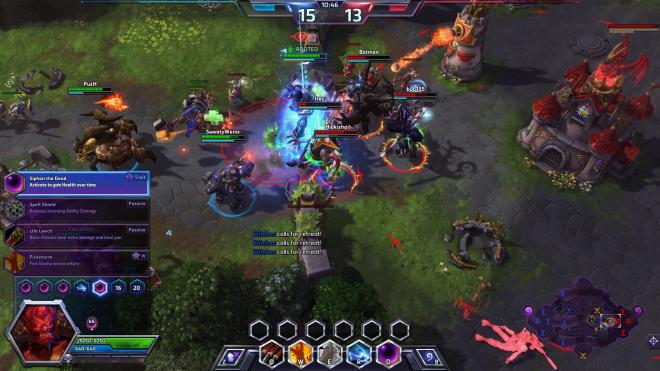 'Heroes of the Storm' is an easy MOBA to get into and stick with. I have been hooked since beta, and that is unusual because MOBAs typically do not appeal to me. While the prices are a bit high and the grinding a bit much, 'Heroes' is still something I will be playing for quite awhile.