Game features multiple control schemes across all available Wii U input methods. Off-TV play is also supported and represents the only significant use of the GamePad screen.

Retro Studios, best known for the GameCube and Wii 'Metroid Prime' series, took on another Nintendo franchise back in 2010 with 'Donkey Kong Country Returns,' a triumphant and commercially successful revitalization of the energetic platforming series for the mega-popular Wii console. Unsurprisingly, Nintendo hopes to find similar success on the Wii U, teaming up again with Retro for 'Donkey Kong Country Tropical Freeze.' At first glance the two titles appear extremely similar, but often it's the smaller details that mark a good sequel over an opportunistic one. 'Tropical Freeze' may very well be both, especially as the new game is the series' first entry in HD.

If Mario platformers are an acid trip in a playground, then Donkey Kong is on speed in a death trap. But it's the good kind of speed that makes you feel invincible until that final fatal moment, wherein you restart the level and subject yourself again with a manic smile on your face. Retro Studio's original 'Donkey Kong Country Returns' was indeed a triumphant return to the titular Ape's glory days of rhythmic vine-swinging, crocodile-bopping, barrel-exploding goodness, and the developer strikes a similar cord in this year's sequel, the long-winded 'Donkey Kong Country Tropical Freeze.'

Thankfully not a continuous stream of notoriously annoying ice-caked platforms, as the title might suggest, 'Tropical Freeze' is a sequel in the best and worst way. Lacking any revisionist surprise, Retro opted instead to refine and explore the things that made the first game so successful. It works, but only if you're already a fan of the formula. 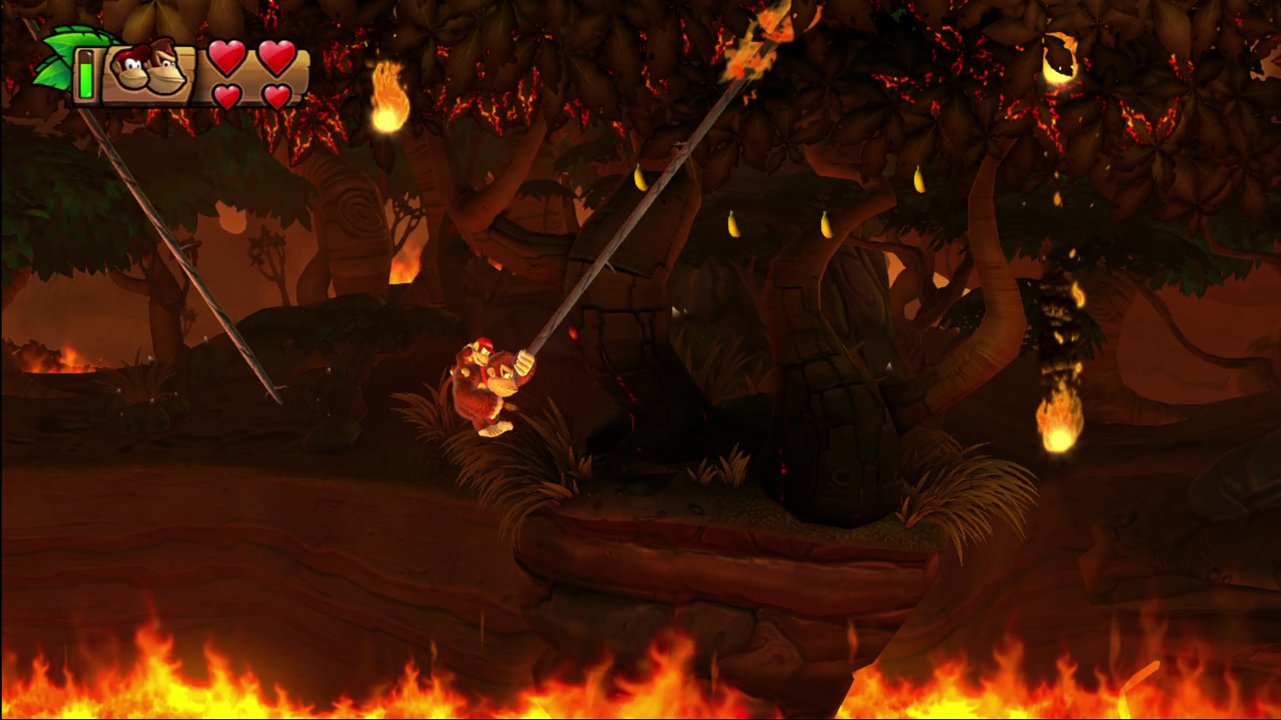 It's a mad scientist's concoction of palm trees and Viking penguins, the world of Tropical Freeze, and the game is never one to hold back on throwing one dastardly trap into the mix with another. Donkey Kong's uniquely weighty yet nimble maneuverability, which has the ape doing very apelike things among swinging vines and grapple-happy ceilings, has always been and remains a fertile groundwork for level design. Marked by a satisfying rhythm, combining Donkey Kong's rolls and jumps with the fire-laden plains in Bright Savannah or the tongue-wetting giant fruit factory in Juicy Jungle is not just enlivening to the spirit, it's distinct among the crowded genre of 2D platformers almost singularly concerned with jumping and running.

And part of that formula is failure, teetering very close to a trial-and-error pitfall while wielding an unfaltering devotion to sweaty palms and held-back yelps of anger. Most obstacles are telegraphed with just enough time to evaluate and react, but just barely. Levels often break apart around you, requiring forward momentum in the wake of tumbling pillars and exploding barrels. Imagine skateboarding as the world crumbles inches from your back wheels. Horrifying, but certainly motivating.

More than often you won't survive some new horror masked in the adorable and endearing environment the first time, but liberally placed checkpoints keep you moving forward even in the toughest of spots.

The levels are long, dense with fast transitions and increasing challenge, and always juxtaposed with an optimistic and jovial presentation, rivaling memories of Sega Genesis' 'The Lion King' platforming from back in the day. But as is always a requisite, the challenge is fair, and makes accomplishing a single level a feat of immense satisfaction, especially when it comes after a multitude of retries. Just don't go in with an expectation of a breezy walk through the jungle. Dangers are most definitely afoot. 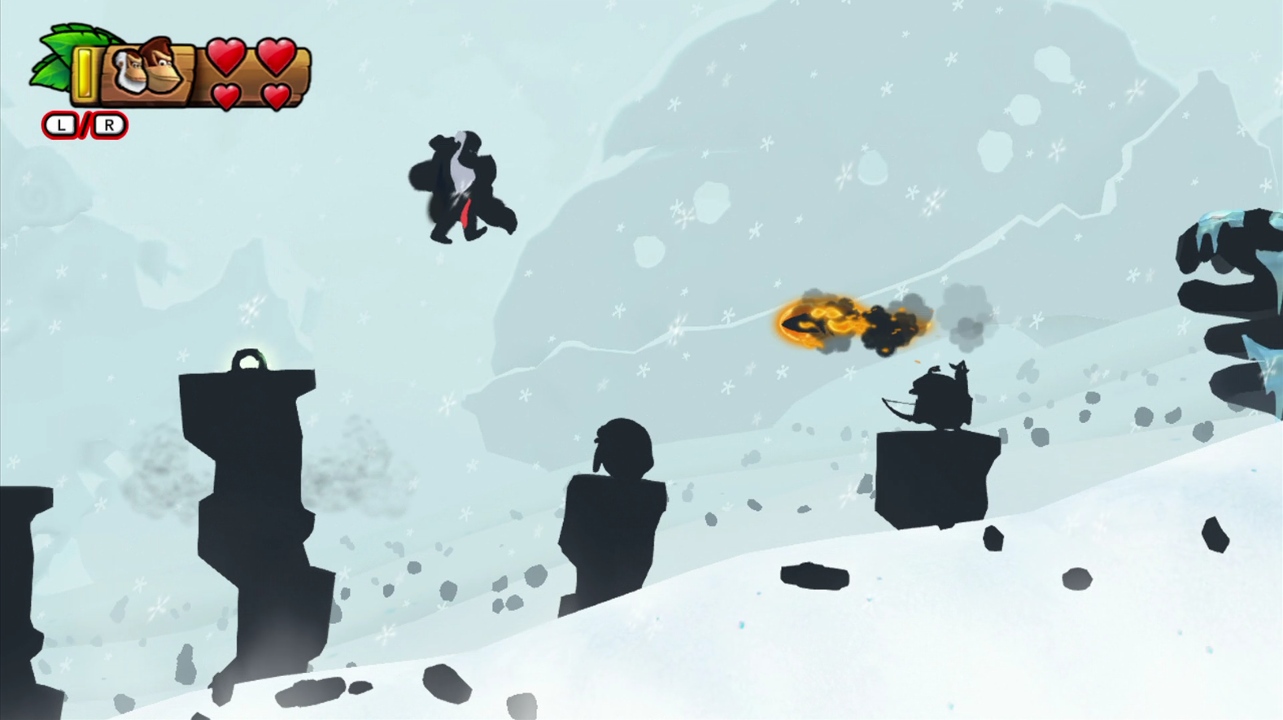 Boss stages, specifically, bring the game as close as it can get to frustrating without pushing you over the edge. Without checkpoints, but with multiple phases and evolving movesets, a simple polar bear or owl becomes a natural disaster, a force of pure, long-unrequited evil. Make no mistake, you definitely deserve it after causing the polar bear to lose his Popsicle into the great blue. The vast melancholy I felt after finally felling the big guy was only matched by elation. These are well-designed, if initially punishing miniature wars, worth every second in the final moments of a beatdown.

Both the mine cart and barrel-rocket levels make a return, Retro mixing in the environment more than ever to connect the player with his or her surroundings. Giant oranges and watermelons are flung at you from the background as you ride your barrel to salvation, propelling upwards by holding down the A-button and letting go for a steep drop. Sure, it's a design popularized by mobile endless runners, but enriched in 'Tropical Freeze' by high production value and a confidently lush visual style. 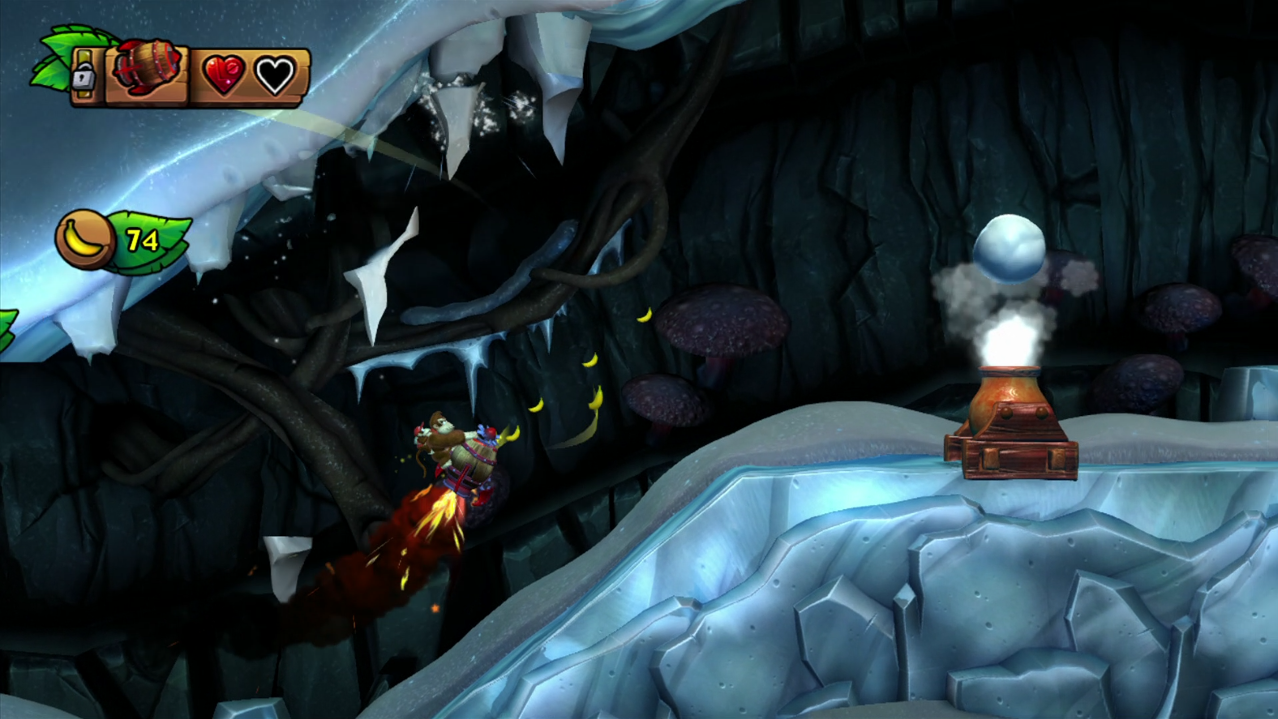 'Tropical Freeze' is not totally bereft of advancements for the reboot series though. Water. It's now a thing you can enter without dying, just like real life! Some levels are entirely devoted to this mystical liquid, while others ignore it completely or transition between the blue and the brown, and even the clear white of ice. Retro even borrows from Sonic here, forcing you to seek out bubbles for air during prolonged underwater sequences. Again, it's the choice of the tense over the relaxed.

More importantly, more differently, are the sidekicks. Diddy Kong, with his jump-supporting jetpack, rode on the back of Donkey Kong in 'Donkey Kong Country Returns,' but now he shares that responsibility with Dixie and Cranky, both of whom offer something new to the song and dance. The former gets Donkey Kong a little higher with a propeller-like twist of her ponytail, while Cranky does his best Scrooge McDuck impression by bouncing on enemies with his cane. There's no doubt in my mind speedrunners will gravitate toward Cranky's style, as the time attack mode specifically allows for the option to choose which sidekick shows up.

While never a necessity, a sidekick offers extra health and an easier ride, not to mention the companionship I've always so desperately desired, so maintaining Dixie, Diddy or Cranky becomes a compelling secondary priority (they're eliminated after two hits). Treacherous vine-jumping is always better with a friend.

Which is to say, naturally, that coop play is an excellent afternoon with a buddy. There's nothing inherently serious about frolicking through a forest as a pair of apes, so the fact doesn't really bother me that the secondary characters, which player number two is relegated to use, are equipped with their extra abilities and Donkey Kong himself remains the most basic. Other than being offended on the big lug's behalf, and that speed runs are completely out of the question, the coop on offer is as enjoyable as the player next to you. It's no 'Super Mario 3D World' in terms of game-wide systemic motivation to partner up, but it's fun.

One note on the control options: the Gamepad and Pro Controller choices are easily my favorite as they avoid any and all of the waggles from the first title. 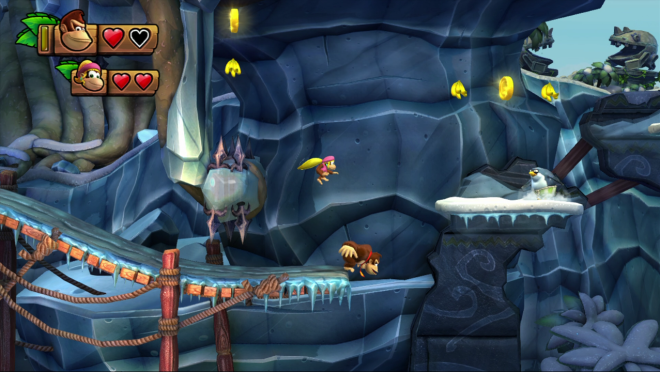 Say what you will about the Wii U, it's definitely more powerful than the Wii. No series offers a more direct comparison between the two consoles, except maybe 'New Super Mario Bros., and it makes me happy I bought the console. 'Tropical Freeze' is a finely detailed, richly realized game, with as much a concentration on exaggerated and lively animations as fulfilled environmental design. And that's in the spectrum of all games, not just the commonly basic 2D platformer genre. Deeply layered backgrounds often merge with parts of the level, connecting players with every element on screen consistently and successfully. It's basically begging for a 3DS remake for passive 3D's sake (which would help with the rare occasion in which I had trouble telling whether an object was actually in my way). I wouldn't go so far as to call it glorious or spellbinding, but there is an immense amount of character in almost every level.

The giant fruit factory and burning plains of a savannah mentioned before aren't just finely tuned platforming levels, they're little scenarios of visual experimentation too. Just about any level runs on its own theme, within the context of the world. You'll be amazed at how many ways Retro imagines the ice-themed levels of the final world. 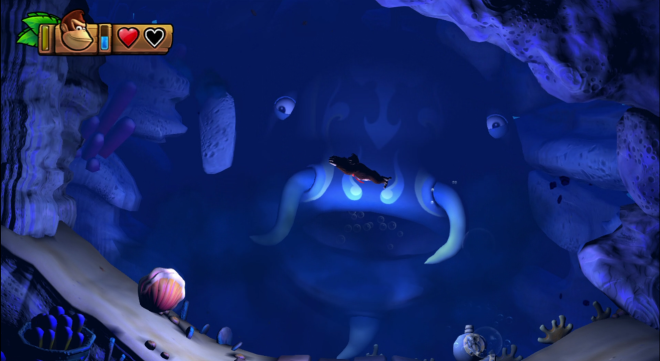 Famed gaming composer David Wise returns to the series with great affect. He's put together a soundtrack that does the absolute best thing music is meant to do – enhance the experience, not just support it. Treacherous cliff-jumping levels are made into a trek of adventure and resilience over deep and grumbling drums. Deepwater dives become explorative as a curious piano riff plays in the background. And, of course, bongos and trumpets play you excitedly through your classic vine-swinging romp. Wise hasn't lost his touch, and the 'Donkey Kong' games are empirically better for it.

Even more, music often transitions mid-level, ramping up at particularly difficult moments or switching to a different tone as you enter a new environment, say by going underwater. It's this sense of deliberate design that will keep many players consciously appreciative of the music, which is a rare thing indeed.

At only six main worlds, and a seventh after post-game achievements, 'Tropical Freeze' might seem a bit lacking in content. It never felt that way, due in large part to the length and density of those levels and the fact that they're each challenging enough to force plenty of respawns. Going for 100 percent completion is enough of a task to fill out a solid chunk of time, collecting all those bananas, KONG letters and puzzle pieces, not to mention actually beating the unrelentingly difficult later levels. You're rewarded not just with a percentage, but a feeling of mastery in the end. 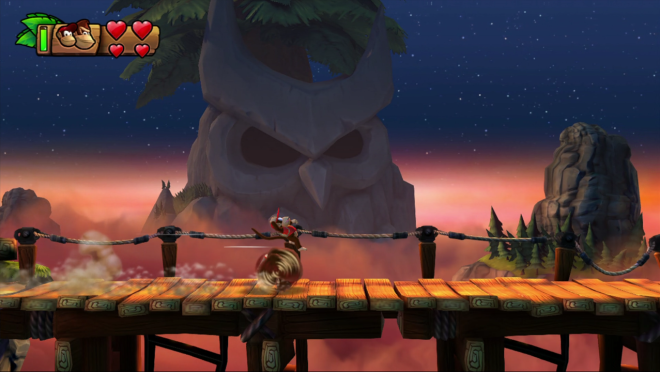 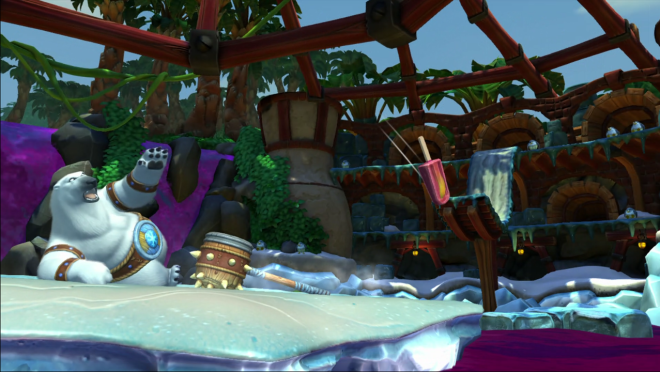 More or less a collection of lengthy obstacle courses with a tendency to break apart and tumble around you and with you, 'Tropical Freeze' accomplishes much in the way of satisfaction and difficulty. Though more an expansion of old ideas than anything blatantly new, what small additions there are, from new sidekicks to subtle level twists, are undeniably positive ones. Accompanied by excellent visual and audio design, it's a successful sequel, bolstered especially by the Wii U's extra bit of power (think about it from Retro's perspective). The studio isn't making waves with this reboot series as they did with 'Metroid Prime,' but they have again delivered an ideal and genuinely exciting Donkey Kong experience.