The Game Itself
4 Stars
The Video: Sizing Up the Picture
4.5 Stars
The Audio: Rating the Sound
4.5 Stars
Replay Factor
1.5 Stars
Bottom Line
Worth a Look

Digital PS4 version reviewed. The review is ultra-light when it comes to story spoilers.

Considered as a whole, the 'Metal Gear' narrative is lengthy, sprawling, convoluted, cyclical, inbred, and seemingly not anywhere close to being final. With 'Metal Gear Solid V' falling much closer to the middle of the series' timeline, I can't imagine how new players can begin with the story that is presented in 'Metal Gear Solid V: Ground Zeroes.' In fact, players who either skipped or neglected to reach the ZEKE phase of 'Metal Gear Solid: Peace Walker,' which was a PSP title before getting an HD console re-release, might have a hard time grasping even the basic plotlines of this brief game. 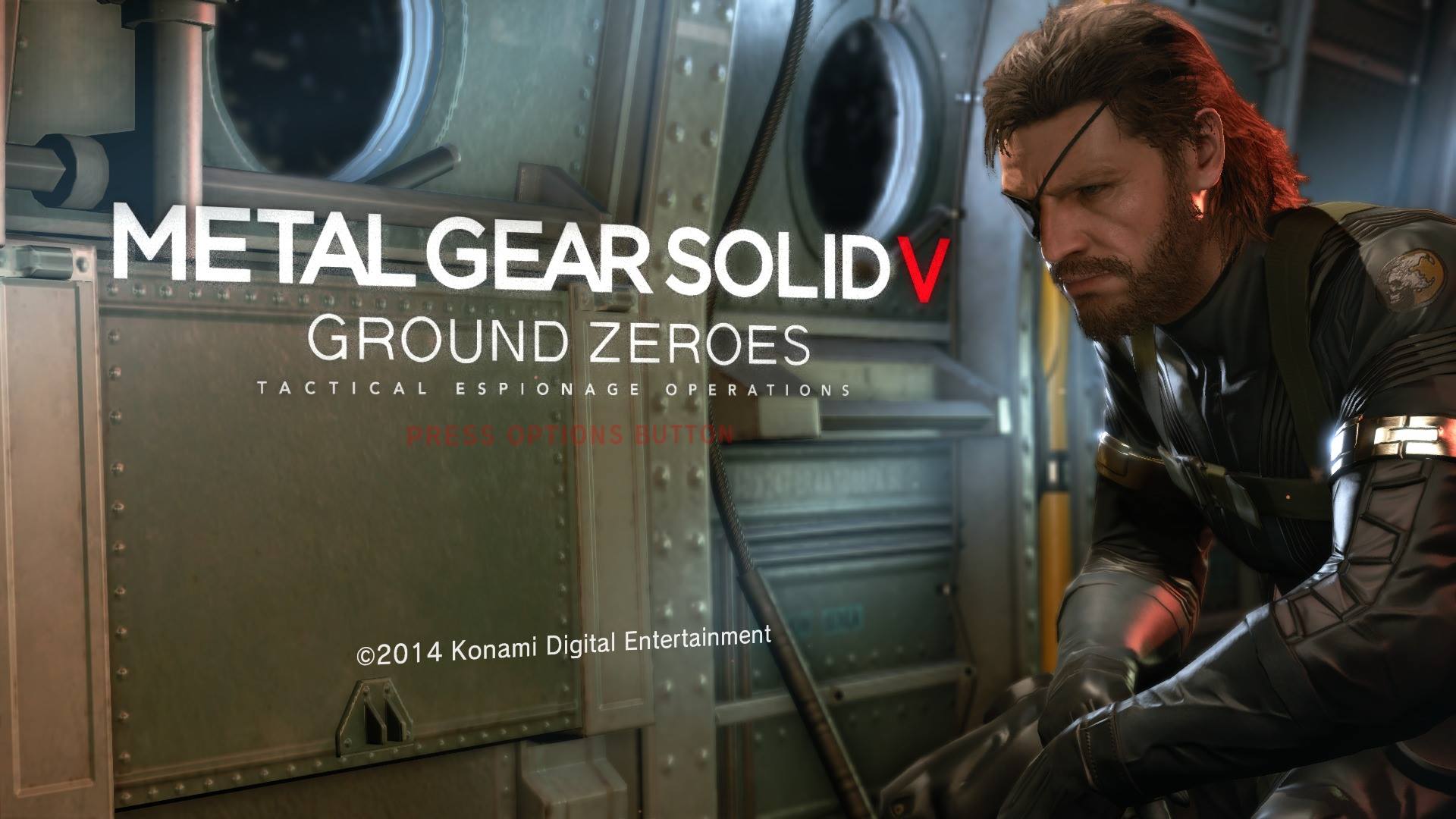 The game includes a kind of summary for 'Peace Walker,' accessible at anytime (even in the companion app). Text summaries are not new to the series, but 'Ground Zeroes' goes further by adding an hour or two of audio journals. In effect it's easily possible that a player could spend more time reading and listening about the last game, then completing the story mission for new game.

There's something close to 30 minutes of cutscenes in 'Ground Zeroes,' which is shockingly restrained by 'Metal Gear Solid 4' standards, and most of the cutscenes that are there were shared by Konami and Kojima well before the game's release. 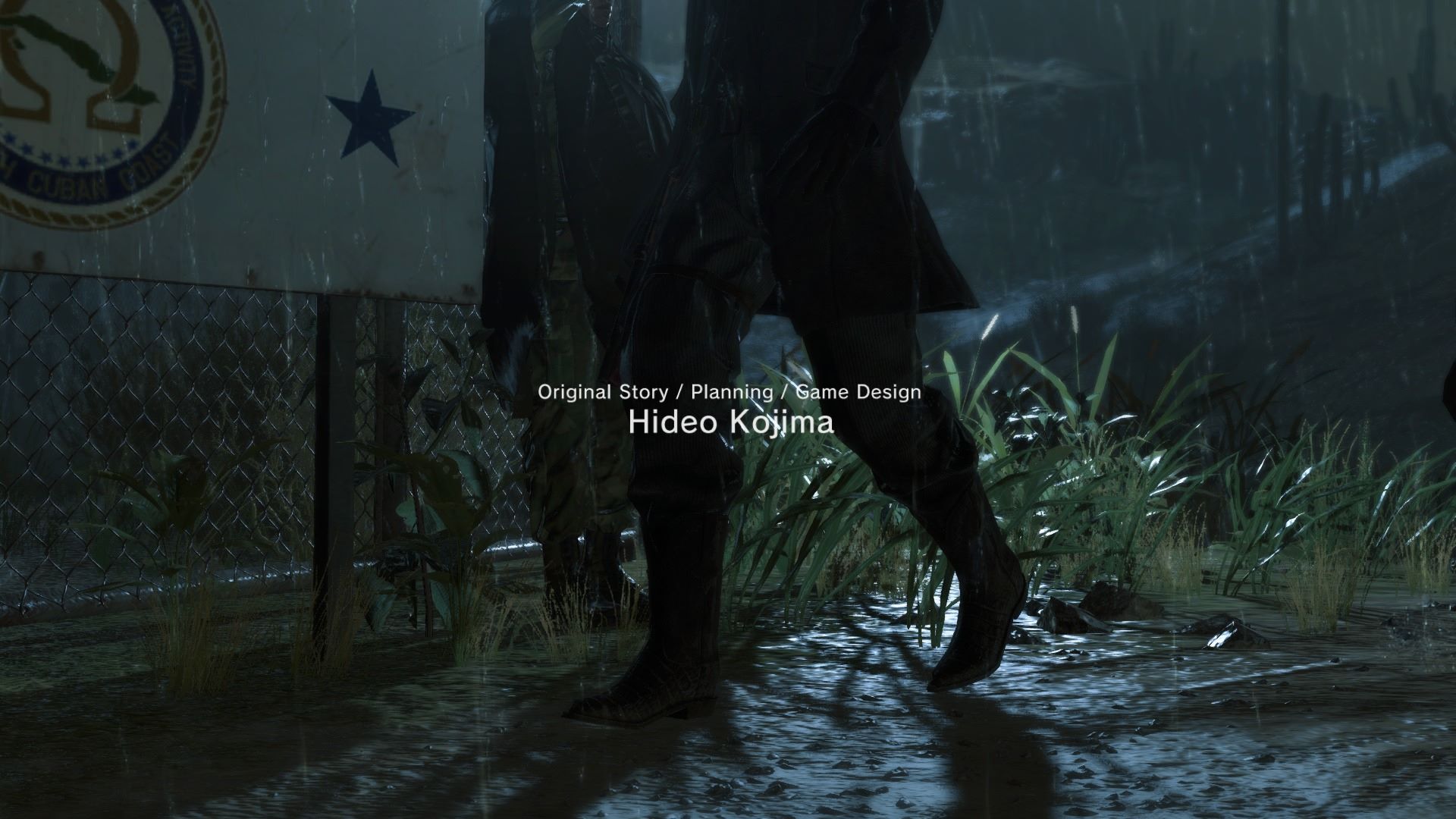 So before even accounting for game's contentious price, it's clear that the story would mainly be of interest to existing series' fans, or possibly an even smaller group, 'Peace Walker' fans. The events of this game could easily be summed up as a 'Peace Walker' epilogue. The gameplay, however, is another story.

A rainy night in Camp Omega, Cuba, is the setting for the overgrown vertical slice of a main mission. As advertised, the base is open in a way not aspired to by any previous 'Metal Gear' game. With Kazuhiro Miller qualifying and adding intel at all times over the radio, the player takes the role of Naked Snake, aka Big Boss, who so typically must infiltrate the base alone without back-up or even much kit. The changes to the controls may temporarily throw someone coming off another 'Metal Gear' title, but new players should find the game's controls more accessible altogether.

Finally, it seems, 'Metal Gear' players have the option to pick up any weapon used by enemy solider. A nice, if not necessarily timely change, but not one that benefits nonlethal playstyles. Weapons and items are now mapped to the d-pad, and careful visual prompts make navigating the loading screen-free base a joy to move through. The map is accessed with the right half of the touchpad, which opens up the iDroid, and doesn't pause the game or protect the player. The map can be updated through player actions or through various ways of acquiring intel. With either the R1 binoculars or with just the R3 stick button, players can highlight enemies and then track them through objects and buildings in an interesting take on the conventional Eagle Vision/Detective Mode. Enemies will even show up on the map. Beyond that, a detection/threat circle will also point players in the direction of a soldier beginning to notice Snake. 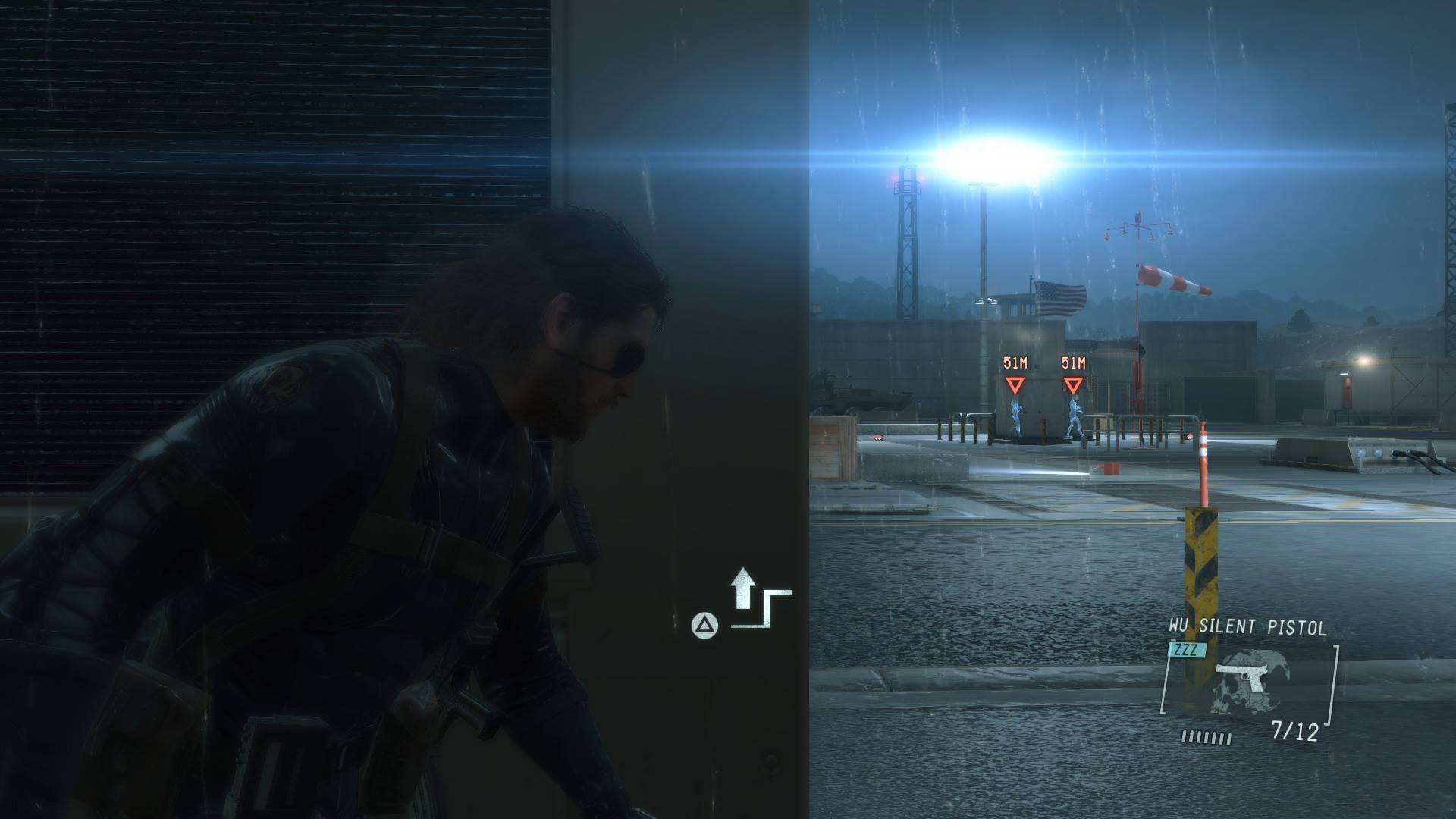 Should Snake get noticed, the game now offers a chance to react before an alert. In a player favored bullet time, Snake can draw a weapon and even get one to two shots off before whatever poor schlub can yell alarm. The only penalty for this "Reaction" is when it comes to the ranking at the end of the mission.

Figuring where to go takes some effort though. Naturally the player has clues, such as the sounds captured by in-game audio cassettes, but the big guidance mechanic revolves around the interrogation of enemy soldiers. Each isolated soldier is one CQC movie away from giving up some tidbit relative to the main mission, weapons and items, or enemy movements.

The main mission isn't exactly like finding a needle in a haystack, but the game does have a few important collectibles, such as additional audio recordings and patches left by the FOX unfriendly enemy organization. Bridging 'Peace Walker' and 'The Phantom Pain' apparently requires a lot audio cassettes. 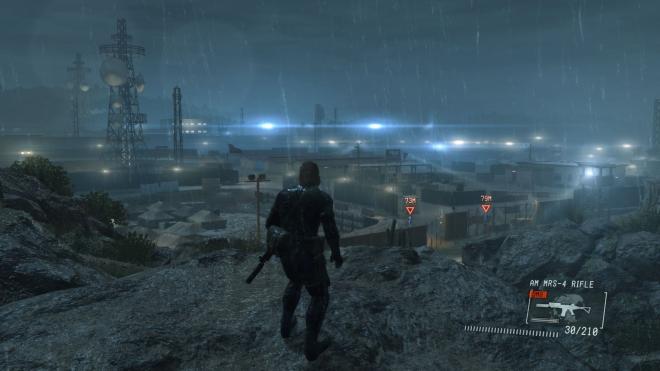 Even if the beginning of the game has been on YouTube for several months, it still looks incredible. And that look carries onto the gameplay to a high degree. Having Big Boss call in choppers or run over enemy soldiers in a Jeep in 1080p under a dazzling combination of lights and rain gets the game the high video score.

It helps that the game ran silky smooth on the PS4. My main mission playthrough featured 17 restarts, as I choose checkpoint over detection every time (and stumbled at first to adjust to yet another 'Metal Gear' control scheme.) The game loaded these restarts so fast that the mandatory need to press 'X' to leave the quick loading screen makes complete sense. Otherwise, the game might load too fast, throwing players. The restart points are usually far enough away to be quickly disorienting.

Still, some obvious things hold it back. The daytime scenes reveal many a row of uniform buildings. It can be easy to find detail like clutter trying to appear gracefully, but still easy to observe dropping in and out. There is a lot of model instancing. Some characters, like Snake, look excellent while others just look last-gen. 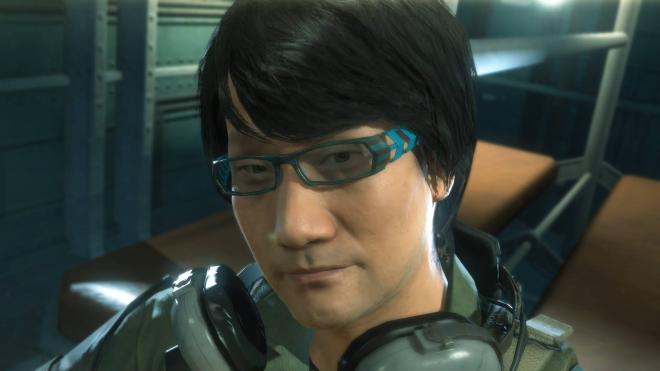 The audio might be the best in the series as the open environment can make passing trucks, radio calls, or the sizzle of a cassette sound very substantive even after a dozen times. The mic pickup on the binoculars makes for fun eavesdropping. The sounds of the base though, don't vary all that much.

The voice acting is deliberate, with most voices and characters being reprised. Kiefer Sutherland's Snake has some trouble nailing the gruff when angry tone, but otherwise serves the role well.

There are several things to unlock including four side missions, a hard version for each mission, and various weapons. There are also Trials to unlock and attempt for each mission. The four side missions take place at the same base, but some are during daytime. These missions aren't worthless but they do feel like something that would be shoved in alongside more substantive content in a 'Substance' version of a 'Metal Gear' game. Unlocking the PlayStation exclusive 'Déjà Vu' mission really takes some doing without a guide. The mission itself has a few nice 'Metal Gear Solid' moments, which feature a little of the goofy things missing in the 'Ground Zeroes' main mission, but feels very slight even for fan service. It certainly doesn't seem worth a double-dip purchase. 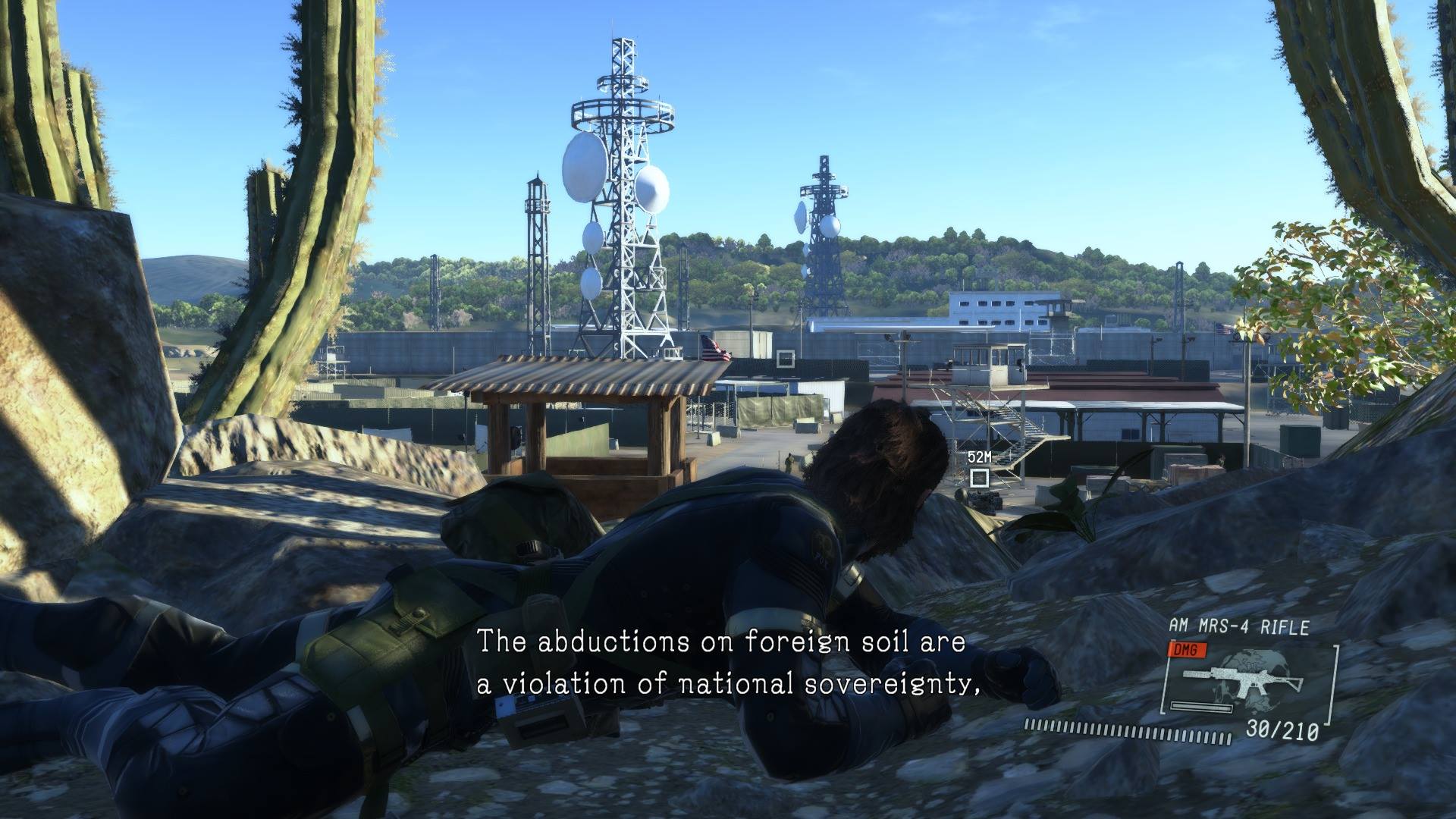 A player might have good cause to separate out each trial attempt ('Tag all enemies as quickly as possible') from their first playthrourgh or from a Hard mode run, but having those things locked feels like an unnecessary and artificial lengthening of the game.

For a very short time, I enjoyed 'Metal Gear Solid V: Ground Zeroes' as I would any new, exciting, and impressive 'Metal Gear' title. I couldn't help but be fascinated by some of the turns assigned to 'Peace Walker' characters, and that is the game's fundamental issue. The game comes across as premium priced fan service. The PS4 version is doubtlessly better than the PS3 version, but the jump in price from $20 to $30 makes the pretty, fun, and short game only suitable for hardcore fans. Cut the price in half and clean up some of the locked features, and the game's rating would be much higher even without adding more content. 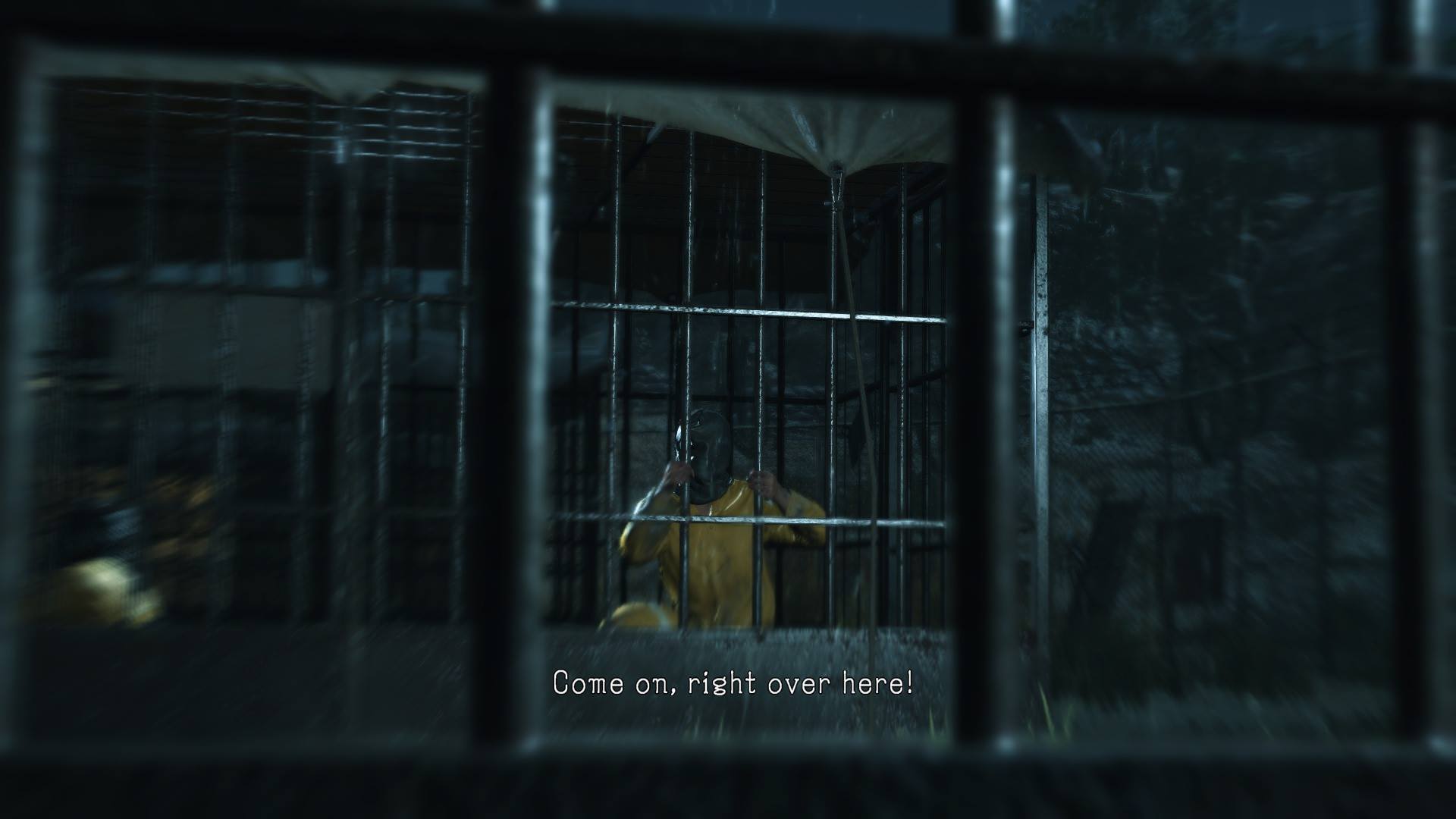