Insomniac Games is perhaps best known for 'Ratchet & Clank', a platforming series. The 'Resistance' series in contrast was a lot more grittier. Until last year’s coldly received 'Fuse', they hadn’t produced a console game for anything other than a PlayStation for the better part of 15 years. Between the frivolity of 'Ratchet & Clank' and the mire of 'Resistance,' comes the highly anticipated and juiced up 'Sunset Overdrive,' which is an Xbox One exclusive title (at least for now). Unusual for the industry, Insomniac retains the intellectual property and not the publisher.

'Sunset Overdrive' is a third-person, open world, platforming shooter. The player is an entry-level employee at FizzCo, an evil beverage corporation that has recently released a new product, an energy drink called "Overcharge Delirium XT". Overcharge turns those who drink it into horrifically mutated, violent energy drink addicts, known as OD'd. After the city falls to chaos, the player character quits FizzCo and soon learns that the few remaining survivors are trapped in Sunset City with the OD'd as well as psychotic scavengers (scabs), and violent FizzCo robots.

The thing is, this apocalyptic scenario is meant to be fun. Even 'Dead Island' is somber by comparison. 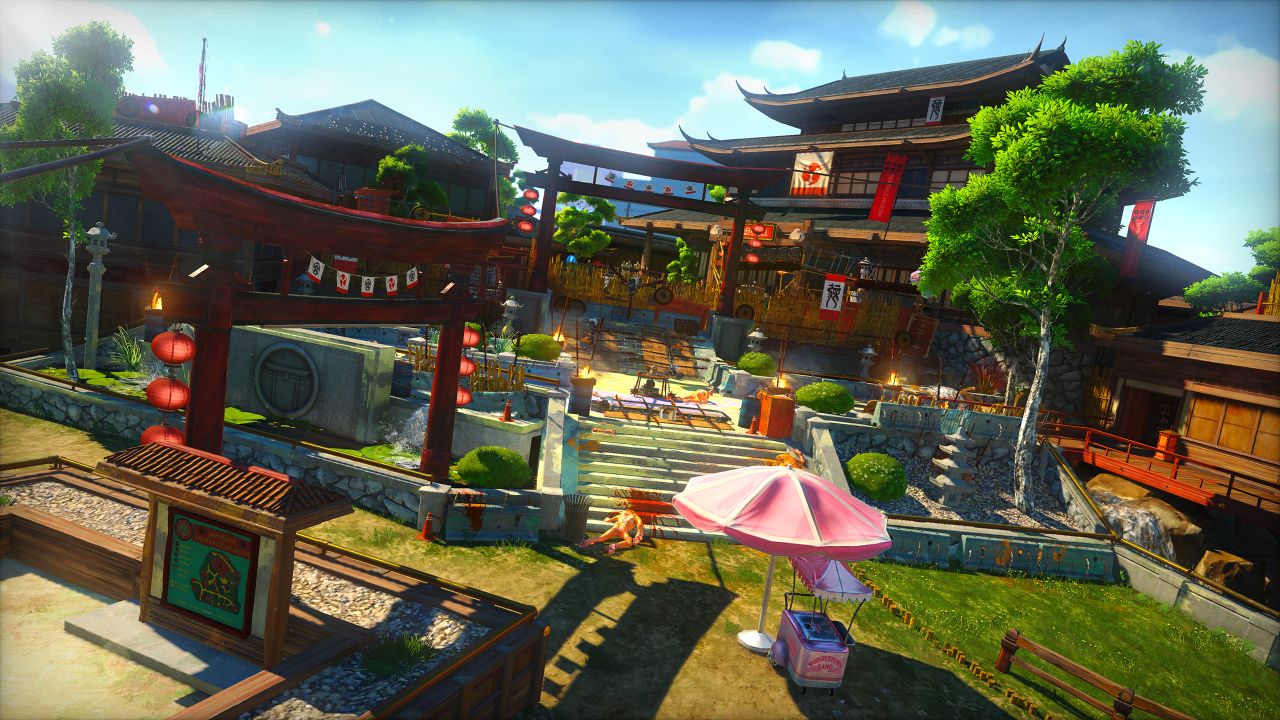 The personality of Insomniac is clearly visible all over 'Sunset Overdrive'. The open world is littered with grind rails, poles, bouncy jump pads, walls for wall-running, and water for water-running. To encourage the player to use said platforming surfaces, there is no sprint button, and the character is extremely vulnerable when on the ground. There are also many bonuses and upgrades to be earned while platforming. While playing, I channeled my inner six-year-old by pretending that I was playing "the floor is lava." That turns out to be an extremely effective technique, as characters that aren’t moving will quickly become overwhelmed and die. However, death is usually without penalty, and there is even a fun, random respawn animation for each one. My favorite is a UFO unceremoniously dumping my character on the ground. 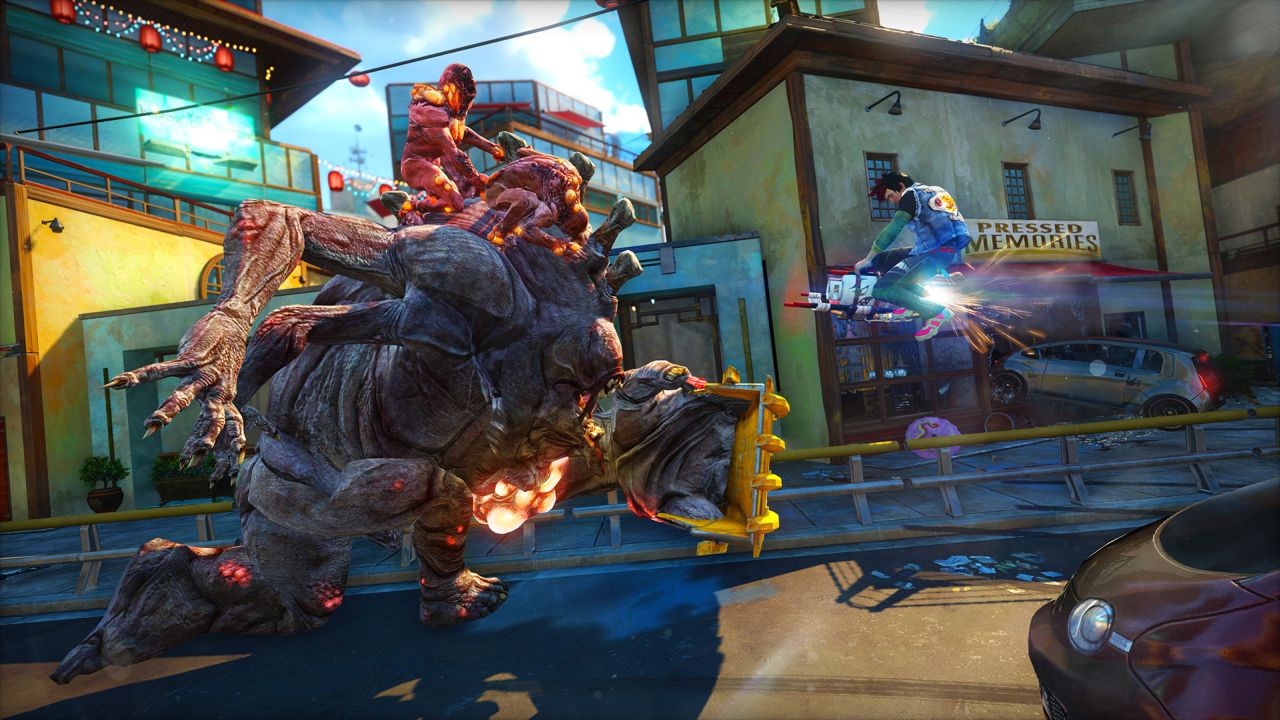 Like the 'Ratchet & Clank' series, 'Sunset Overdrive' has a fun, irreverent, and occasionally dark sense of humor. It does not take itself seriously and offers a refreshing break from the many shooters trying to outdo one another with edginess and grittiness. It is violent, not in a gory, bloody kind of way, but in a Saturday morning cartoon kind of way. The weapons reminded me of a 'Dead Rising', what with the teddy bear grenade launcher, acid lawn sprinkler, phallic flamethrower, and many more. While the platforming and shooting mechanics don’t really change over the course of the game, there is enough variety in the menagerie of enemies to keep things interesting. The weapons vendor always has new and zany products in stock, and weapons can be leveled up and modded as the player sees fit. The protagonist themselves can also be customized and upgraded through the use of amps, from appearance to clothing to the voluminous amount of mods. Mods can be purchased with badges that are given out for the player’s performance, and sometimes created through quasi-story missions. There are six mod slots with bonuses that range from vanilla attribute buffs to transforming enemy corpses into ad-hoc missile batteries and other zany things. The suite of mods can be swapped out as needed to fit a particular playstyle. As I spend most of my time bouncing around on air conditioning units and semi-trucks instead of grinding on rails, my mods are arranged accordingly, and the pièce de résistance is a mod that randomly shoots out exploding fireballs whenever I land. 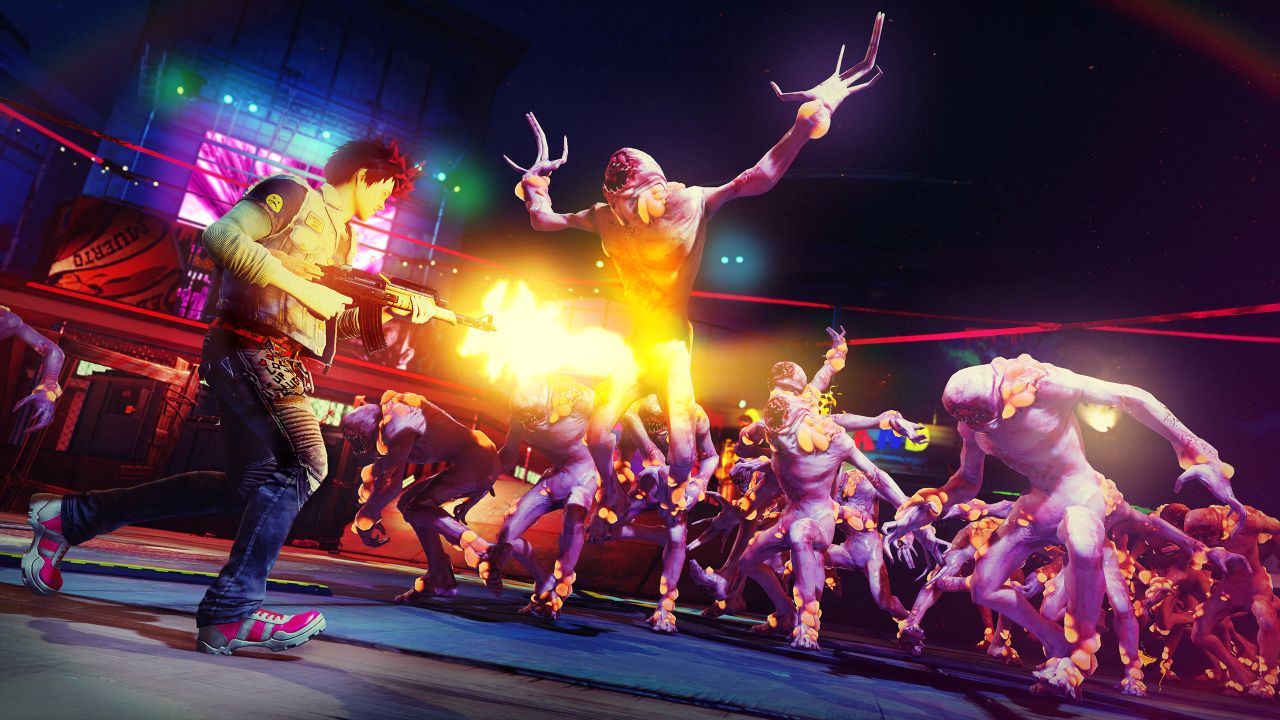 The characters and storyline are funny and entertaining most of the time, although occasionally the script seems like it’s trying too hard. During these moments the game will often acknowledge this by making fun of itself. 'Sunset Overdrive' breaks the fourth wall frequently, poking fun at America, pop culture, video gaming in general, and the player. The player character is referred to simply as “Player” by many of the other characters. Sometimes the jokes fall flat, and the characterization overall is a little weak, but while playing I found myself more attracted to storyline missions than I normally am during open world games. On one mission I was given a ferociously violent and adorable robodog who obliterated anything struck with one of my stuffed kitten toy mortars. And that’s not even one of the weird ones. 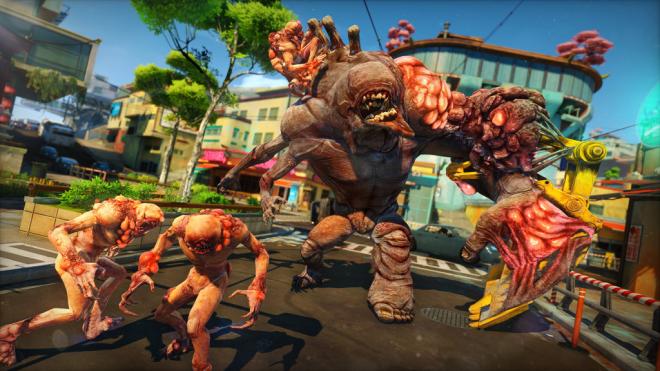 Sunset City is a vibrant, colorful open world. It looks like a huge crayon box exploded over the landscape, covering everything in bright orange, pink, and purple. The architecture itself is perfectly conducive to platforming, and the whole city is like one big pastel playground. Despite its cartoonish appearance, the visuals are excellent, with faces and textures that hold up even at close range. The mutant enemies look terrific in all of their gruesome, gelatinous glory. The draw distance is long, allowing the player to see great distances and plan out extended bouts of grinding and bouncing. Details on distant buildings tend to fuzz out a bit more than expected, however. There is also the occasional random pop-in during cutscenes. 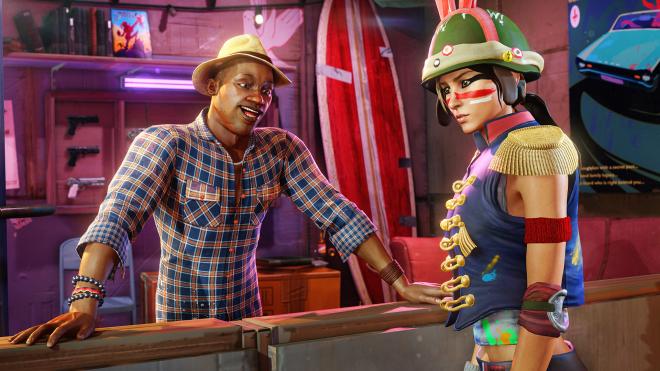 The soundtrack is a long setlist of punk and garage rock. The Bronx, The Melvins, Cheap Time, and similar acts can be heard throughout the game. This particular genre of music is not for everyone, but it fits in neatly with the game’s high-energy, faux rebellious style. It plays most prominently during cutscenes and other dramatic moments, and pops up sometimes at a lower volume during open world gameplay. Note that it can be completely muted at any time.

The voice acting is playful and mischievous. One of the better performances can be heard from the female Player, who is cheerfully sassy without being hammy. While many characters are presented as a caricature (deliberately so, it would seem), their voices are at the very least not a phone-in.

Like any good open world, the replay value of 'Sunset Overdrive' is found not in playing the main storyline repeatedly, but in squeezing out every ounce of gameplay from the sandbox. There are fun side missions, various challenges, and collectibles that are less tedious to collect than I expected, mostly because they can only be found through the addictive platforming. There is a co-op mode, where I was matched with several other players, dropped into a map, and instructed to destroy monsters. It is similar to the horde mode found in many third-person shooters. After each match, all players can vote on the next objective. Any upgrades collected in co-op will carry with the player when they return to the single-player. It is not a deep multiplayer component, but provides a decent diversion. 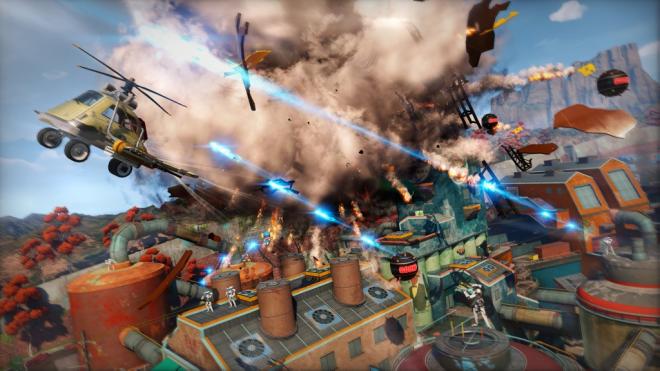 This is the best Xbox One exclusive to date, although competition is a bit slim in that category ('Dead Rising 3' made the jump to PC this year). It reminds me a lot of 'Saint’s Row IV', 'Borderlands', 'Jet Set Radio', and even 'Crackdown', and the combination of a self-effacing world and move-or-die gameplay makes it the rare open world treat. While the crowded release schedule this fall may divert attention from it, it is absolutely worthwhile.