'Tom Clancy's The Division' has been generating a great deal of hype since its announcement way back in 2013. There have been some rocky turns with the development, with delays and a launch night that could be charitably described as spotty. Ubisoft’s Massive studio did a significant portion of the development work, with assistance from Red Storm (a very Tom Clancy-centric studio), Annecy, and other Ubisoft holdings.

'The Division' is a largely post-apocalyptic experience, with the player character being a member of an elite government stay-behind force with a penchant for luminescent orange wearables. A variant of smallpox known as the Green Poison has completely obliterated the human population of New York City. The few survivors now live in a state of anarchy, some of them just trying to get by, while others have taken to looting, vandalism, and far more serious crimes. The police and other municipal agencies are powerless to stop the decline, and the only authorities remaining are Division agents and members of the Joint Task Force (JTF), both of which are in short supply.

As a Division agent, the island of Manhattan is my playground. The open world is laid out in typical MMO format. Some zones are far more dangerous than others, and the map informed me about the levels of the enemy I could expect inside each one. 'The Division' is a third-person shooter, but it’s the kind of RPG-influenced shooter where little numbers fall from the enemies with each bullet that strikes them. Success is just as much about properly outfitting a character as it is with actually shooting the bad guys. This also is a loot game, after all, and it has the kind of loot system that can be demanding, in a good way. In between missions, I spent downtime at the home base, a massive post office turned operations center. Here I would trade with NPC vendors, craft better equipment (or tear apart the crap stuff and try again), and otherwise micromanage my inventory to my heart’s content. How could I possibly be expected to save the world with subpar gloves?

Of course, collecting the goodies has to be as much fun as managing it, or the whole system falls apart. As a shooter, 'The Division' is quite competent, but not groundbreaking. The cover system works like a charm, and I found myself constantly repositioning myself behind cars, roadblocks, pillars, or whatever else was lying around in order to line up better angles and coordinate with my team. Switching between covers can be done somewhat autonomously, and the amount of tooltips on screen at any given time is overwhelming. There is text for everything, not to mention the frequent updates from my AI buddy ISAC/Garrus Vakarian. I learned to filter out most of the white noise and focus on the important stuff, like how many grenades I had left and when my healing aura would be ready again. The MMORPG elements are more involved than I had anticipated, and there’s nothing wrong with that. There are no character classes, but I tend to swap my skills around depending on what the other members of my team are using. Four agents with healing skills is probably a bit too much tank and not enough gank, for instance, so in that scenario I would select a loadout focused more on buffing and explosives.

Co-op is readily available for just about any activity, but almost the entire game can be played completely solo. Whenever I needed a break from team shenanigans, I would go off on my own into the wilds of Manhattan. There are many things to do on the island, most of them involving shooting bad guys and collecting supplies that the bad guys were stealing. Then I would in turn steal the gear they dropped, and of course collect resources for the home base. Upgrading the home base is how character development works, outside of leveling up and inventory management. New skills, mods for those skills, and other passive buffs are all granted by the base, in return for collecting hours and hours’ worth of medical, security, and tech credits. The skill trees are nonlinear, which allows players to hone in on skills that immediately interest them, and thereby help to differentiate players even while everyone continues to level up. While it could come across as repetitive, I never really felt like I was grinding. There are enough forms of currency that the next upgrade is always very close, whether it’s via the base, crafting, or store purchases. 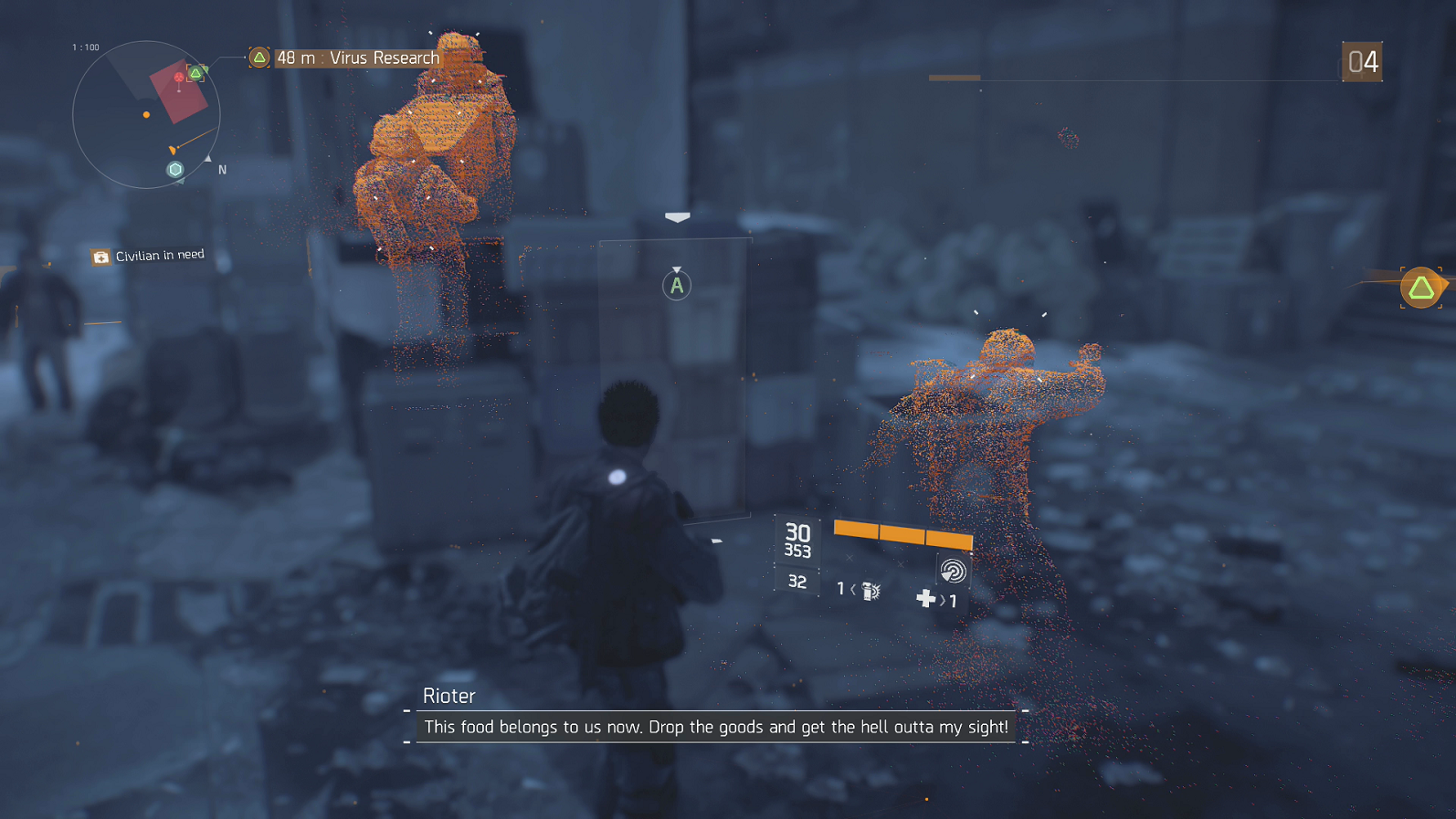 I think Ubisoft has learned that less is more when it comes to telling a good story. I’m not saying 'The Division' has a good story, but it is often content to put vignettes into the environment and let me discover them at my own pace, instead of trying to inject edgy or hoo-rah overtones into every conversation. Radio chatter can be heavy, but I sometimes enjoyed listening to the neurotic mission NPCs as they described where to go next. I do wish that the mission structure had been more organic, with tasks coming from the world itself and not always being handed down from command in a paint-by-numbers fashion. I will say that I like the level of darkness in the narrative, and not just in the form of bad words being used for the sake of bad words. 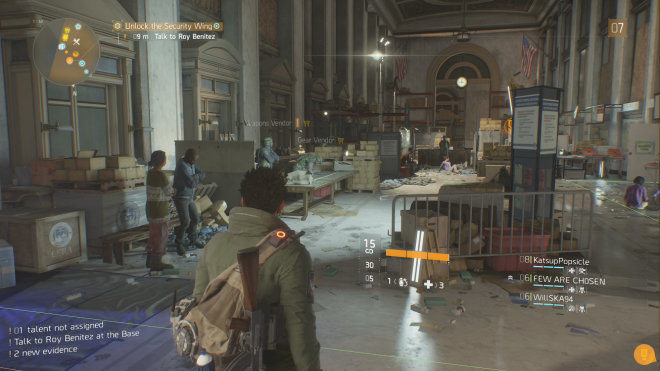 Ubisoft’s Snowdrop engine puts on a good show. The level of detail is high, lighting is brilliant, and the framerate is strong. The night/day cycle and dynamic weather in particular offer an air of subtle authenticity to the abandoned wasteland of New York - there are no zombies here, no aliens, just a ghost town, but it is a beautiful ghost town. As mentioned, Massive perhaps went overboard with the huge amount of text data and little onscreen blips. I experienced occasional aftershocks from Ubisoft’s midnight launch snafu, but nothing more debilitating than a few disconnects. 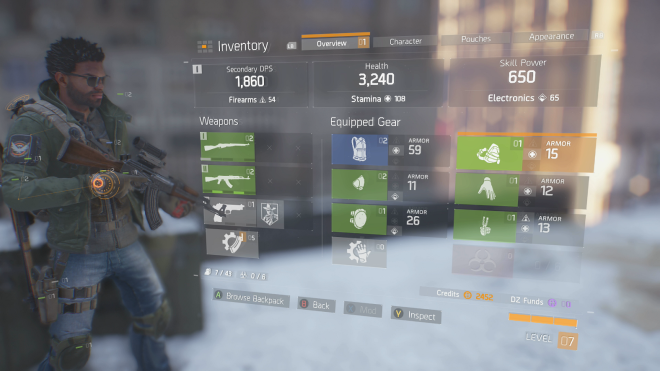 'The Division's high production value shows through in the audio. Voice acting is typically excellent. Between ISAC’s constant computery updates and the high-tech gadgets at the agents’ disposal, there is a discrete, layered level of science fiction at just the right amount of Tom Clancyness.

Much of New York is available right from the start, although the eastern half of the island can be very dangerous for underleveled characters. Matchmaking is incorporated almost seamlessly and usually happens in the background, letting me do other things while waiting for a team of agents to help out with my latest mission. I typically only used it for the missions, which are far more challenging than the open world encounters, but randoms and friends alike can accompany you for every activity once the tutorial is finished. I mean, once you can get through the line for that damn laptop in the tutorial, rather.

The Dark Zone is 'The Division's PvP area, located in a locked-down section in the middle of the city. It is completely optional, and sometimes the PvP inside is optional too. I would be instanced with a few other agents, and we would fight high-leveled criminals together while cautiously watching one another out of the corner of our eyes. Shooting other agents is allowed, but flags the shooter as a rogue who can be freely gunned down by anyone else in the area. Clearly, this is a system in favor of groups, but I relished the danger of going solo. Sometimes I fought back against the rogues and sometimes I would run to fight another day, jealously guarding the loot that would drop if I died, along with my pride. The loot found here is contaminated and can only be brought outside of the Dark Zone if it is extracted via risky chopper pick-up from a common area, which allows players to converge on each other and either help fight off the mobs or use the opportunity to do a bit of mugging for themselves. While the loot here isn’t quite as awesome as the game would have you believe, I whiled away many hours in the Dark Zone. 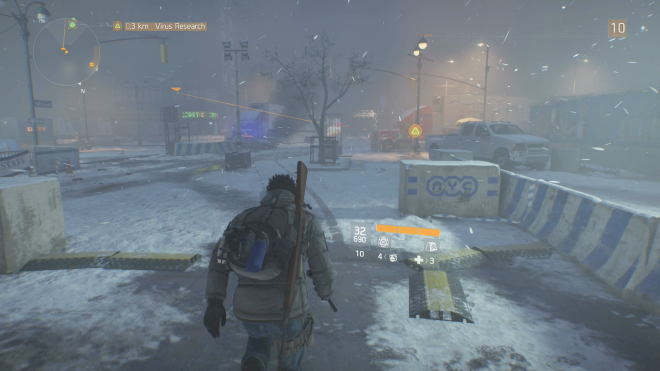 'Tom Clancy's The Division' has the fingerprints of many other Ubisoft properties: 'Ghost Recon', 'Rainbow Six', and even non-Clancy stuff like 'Watch Dogs'. It combines some of the best features of those games into a highly enjoyable MMO slash shooter. I would not say it’s the best shooter I’ve played on the Xbox One, nor is it a huge leap forward in video gaming as a whole, but I’ll be damned if I’m not having fun with it.