Turtle Rock Studios formed in 2002 and has focused almost exclusively on first-person shooters. They are probably most famous for 'Left 4 Dead', a popular co-op FPS set in the early days of a zombie apocalypse. With the backing of 2K Games, Turtle Rock has been working on 'Evolve' (previously known as 'Wild') since 2011, and unlike 'Left 4 Dead,' 'Evolve's focus is asymmetrical multiplayer. Four hunters. One monster. 'Evolve' went through a series of progressively public playable alpha and beta tests (including this semi-public alpha), as well as a very public delay from 2014 to 2015.

'Evolve' takes place far in the future. Humanity has colonized beyond Earth and developed advanced technology. One particular colonization project on the planet Shear is cut short when the civilians discover apex predators far more ferocious than anything previously encountered. A team of soldiers and trackers are called in to eradicate the monsters.

Rather than the symmetrical team deathmatch found in most FPS titles, 'Evolve' has a distinct 4v1 format. In both solo and multiplayer, four hunters with specialized roles and abilities square off against a single massive, powerful creature. There are several modes of gameplay, but the fundamental mode is Hunt. The monster’s first priority is hiding and hunting local wildlife. The more they eat, the more they can evolve. A fully armored stage 3 monster is generally capable of wiping an entire team of hunters in one go, so it is imperative for the hunters that they find it before it can evolve. The monster has several tricks up its sleeve to hide and escape, and the hunters also have the means to find the monster.

Each hunter team has four members: one from each of the four roles of assault, trapper, medic, and support. The abilities of each can vary widely, and the support in particular is kind of a jack-of-all-trades. Each member is crucial to the team’s success, and losing even one can mean defeat unless the monster has already been seriously wounded. The trapper is the point man, leading the rest of the team to the monster and then holding it in one place until it can be killed. The assault’s only job is to inflict punishing damage (though managing aggro is often important). The medic keeps everyone alive of course, but this can take different forms. Val has a fully automatic "healing gun", Caira shoots healing grenades, and Lazarus can revive teammates who have been downed or killed. 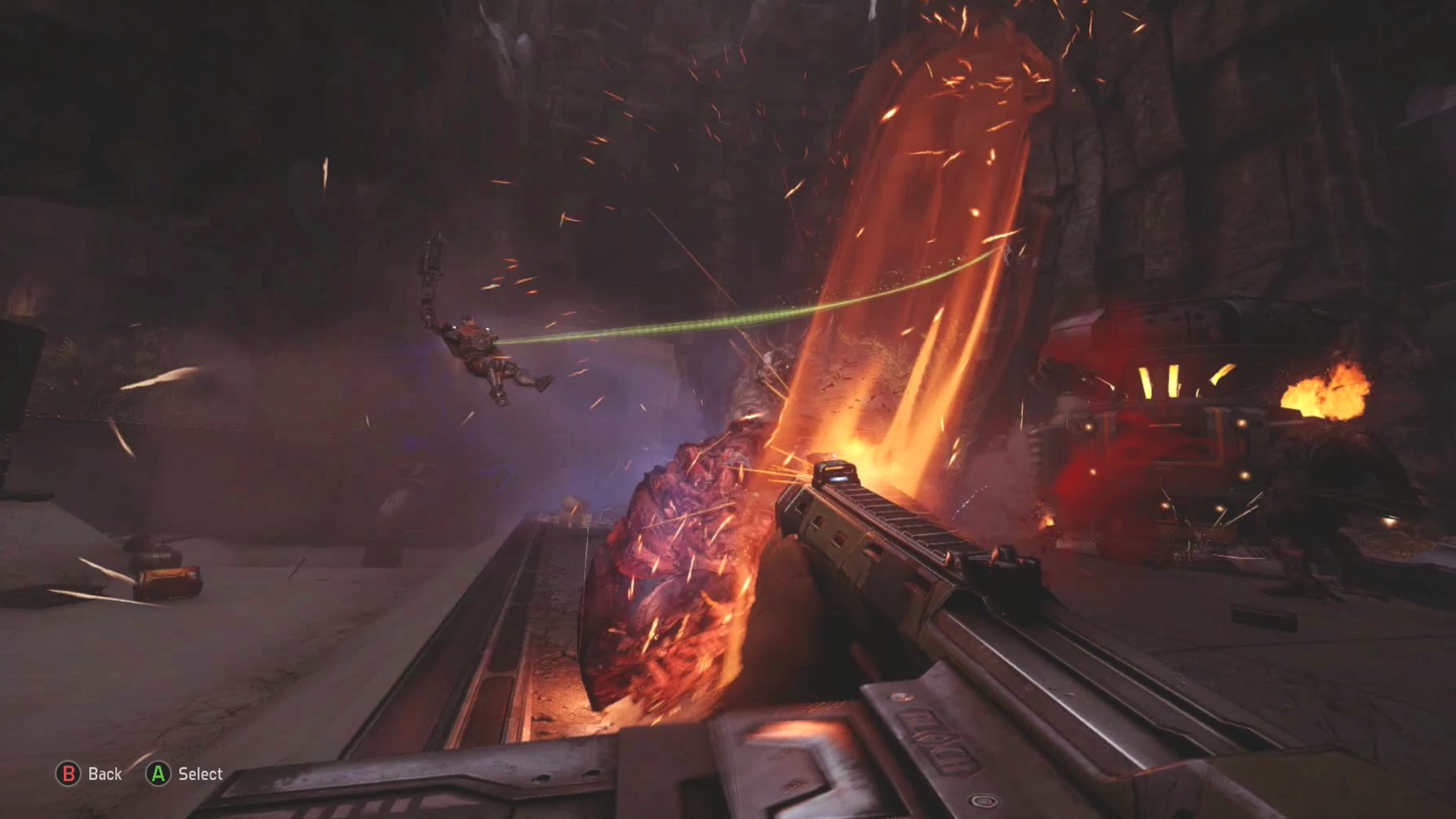 Three monsters are available at release, each with very different abilities. The goliath is a bruiser who excels at close-range brawling. The kraken is a flying creature with ranged attacks. The wraith is very creepy and sneaky, skulking around and snatching up hunters or planting decoys. Stage 1 monsters can be dispatched quite easily if found, and it is because of this mechanic that the game really shines. Creeping around as the monster, narrowly escaping the hunters while pausing long enough to feed, is an exercise in patience and stealth. If the monster can survive to reach stage 3, it can destroy the power generator and force a big fight.

Asymmetrical player-vs-player is difficult to pull off due to the careful balance required. 'Evolve' for the most part excels at the balancing. There are a few hiccups here and there, like some abilities that will probably go underused (Griffin’s harpoon gun, for instance, is cumbersome when compared to Maggie’s harpoon traps or Abe’s stasis grenades), but more of my matches turned out to be close draws than curbstomps. The only blowouts were when playing as a hunter against an inexperienced monster who committed to fights too early. These players will likely either improve with time or simply become frustrated and switch to being hunters. This is not a fault with the design; playing a successful monster is just not the typical FPS gameplay and may not appeal to everyone. 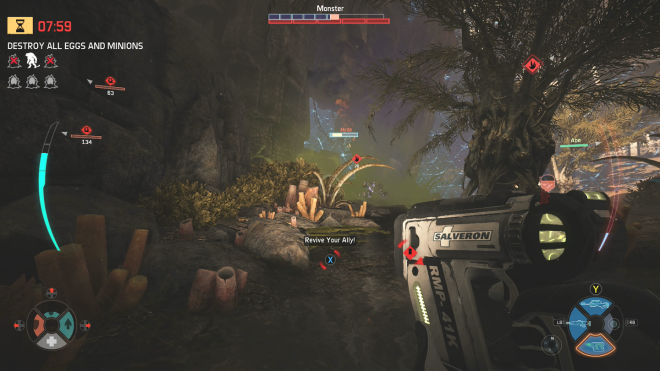 'Evolve' looks very nice with its fancy CryEngine. The environments are very alien and beautiful, with lots of eerie flora and fauna populating them. Visual effects are strong, from fire and water to the lighting. The game design lends itself to a mix of dense tropics, full of creatures of varying danger, to large open areas that effectively carry an "emerging from the woods" feeling.  The only issue I noticed was some odd shadowing in the foreground, but this was rare and didn’t affect gameplay. The framerate stays solid even in pitched battles. 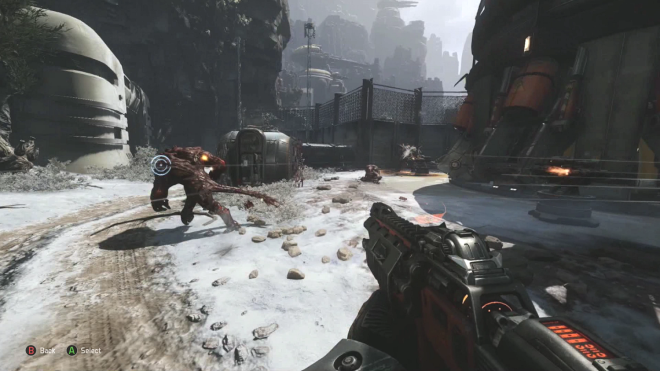 As in 'Left 4 Dead', sound effects provide a great deal of information to the player. Nearby wildlife can be identified by their calls - some of these are a mere nuisance for a monster, but can severely disrupt the hunter team if they’re not paying attention. The characters provide intel as well through their observations and exclamations, and the voice acting is good. Hank, however, is very naggy.

There are several permutations to diversify the gametypes in an attempt to provide more content to players than the basic Hunt mode. Nest mode has hunters shooting defenseless eggs scattered around the map while the monster scrambles to protect them. Rescue is the inverse - injured civilians lie motionless on the map for the hunters to rescue while avoiding the monster.

Evacuation is the closest thing 'Evolve' has to a campaign. It strings together 5 separate maps and objectives and gives a bonus to the winner of each round. If a monster wins one round, for instance, the hunters’ equipment may periodically malfunction on the next one. Evacuation does offer moderately more content than the standard Hunt, but on the whole the content might start to thin out before too long. This is not uncommon for shooters, but the gameplay of 'Evolve' is strong and gives the game more legs than its meager collection of modes would normally support. All content is also available in solo mode.

The previous limited releases of 'Evolve' have allowed Turtle Rock and 2K to fine-tune the server performance and gameplay. Everything hums along nicely now except for the occasional matchmaking drop, and the 4v1 cat-and-mouse formula works very well. Playing as a hunter is fun and playing as the monster is fun. There are some issues with repetitiveness, but this is one of the best asymmetrical multiplayer shooters in recent memory.