Disc version reviewed. Another take on 'Middle-Earth: Shadow of Mordor' is available here.

'Middle Earth' is a vast and expansive world created nearly three quarters of a century ago from the imagination of English writer, poet, and World War I veteran, J.R.R. Tolkien. His stories and characters span thousands of pages, dozens of cinematic hours, and numerous video game interpretations. The newest entry into the video game medium, 'Middle Earth: Shadow of Mordor' is poised to be one of the most ambitious and creative uses of the property to date. Developed by Monolith Productions, most notable for their contribution to horror genre with the likes of the 'F.E.A.R.' and 'Condemned' series, 'Shadow of Mordor' is a follow up to their multiplayer online battle arena (MOBA) 'Guardians of Middle Earth'.

With a greater focus on the single player experience and boasting an entirely new AI mechanic in their Nemesis system, the build-up and support from publisher Warner Bros. Interactive Entertainment resulted in one of 2014's most anticipated new IPs. However, just prior to the release of 'Shadow of Mordor', news spread that the title would initially only be available on the current generation consoles and PC, delaying its release on last generation hardware. As might be expected, concern for the game's quality and questions of an unfinished product were understandably posed. Is 'Shadow of Mordor' the one 'Middle Earth' game to rule them all, or is it better off cast into the fires of Mount Doom?

As is the case with many of Tolkien's stories, 'Shadow of Mordor' begins in a most dramatic (and tragic) fashion – with the brutal murder of the wife and son of playable character, Talion the Ranger. Denied the embrace of his loved ones in the afterlife after his own life is taken, Talion is provided with an opportunity for revenge when a ghostly Wraith binds their spirits together. This union not only prevents Talion from dying (more on that later), but also provides him with the otherworldly abilities needed to seek justice and revenge upon those who took his family from him – the disciples of the Black Hand of Sauron. 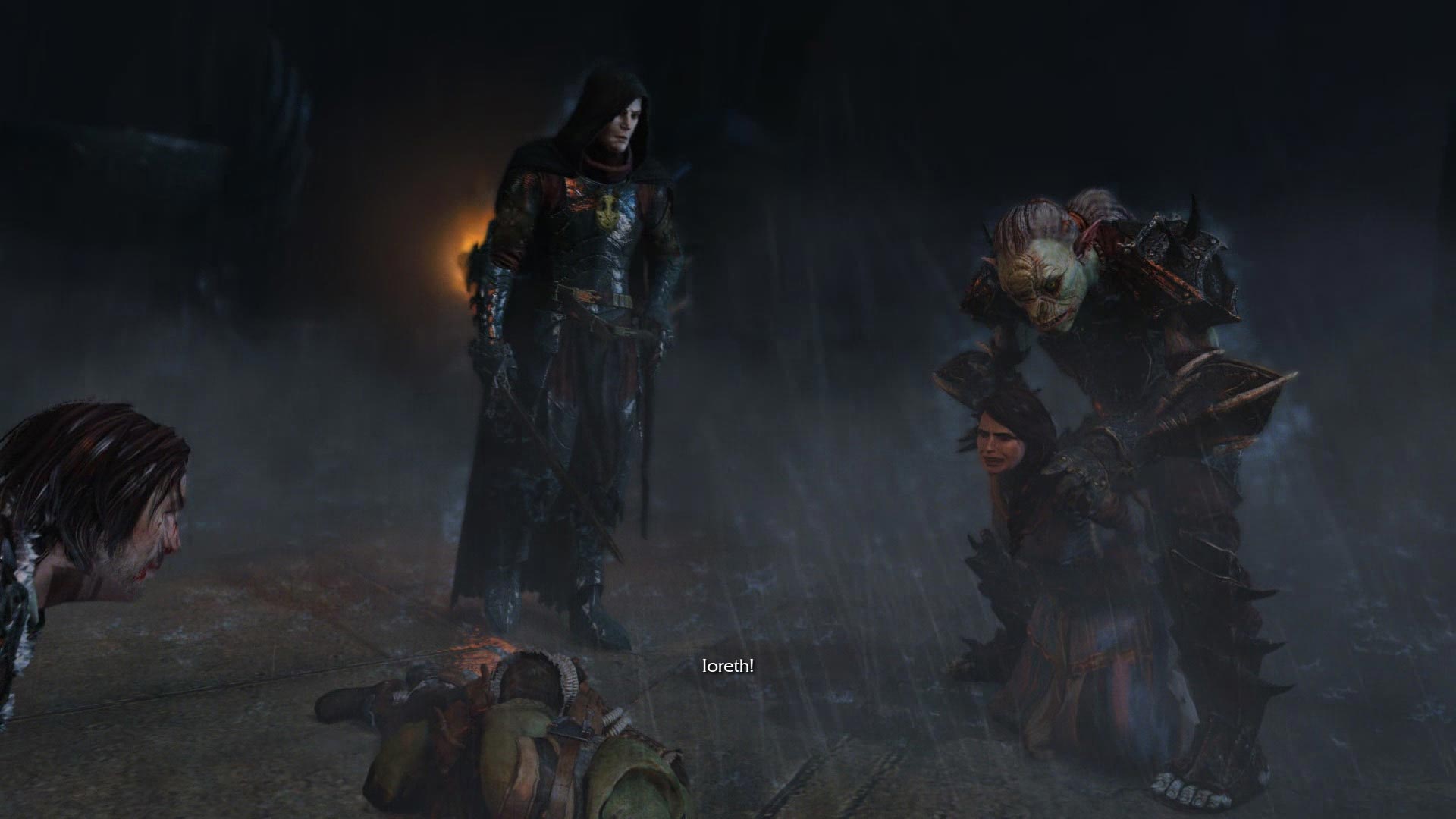 From a third-person perspective, fans of Rocksteady's 'Batman: Arkham City', as well as Ubisoft's 'Assassin's Creed' series, will undoubtedly feel right at home with the exploration, combat, and stealth mechanics of 'Shadow of Mordor'. Undeniably familiar, each mechanic feels fresh and refined, upgraded and improved. Attacking and countering, when surrounded by dozens of blood-thirsty Uruks, is as fluid and graceful as it is bloody and brutal, allowing for combat finishers that deliver slow-motion beheadings and animalistic savagery that satisfies on a slightly disturbing level. Stalking your victims - hiding in the shadows and effortlessly climbing to the highest peak of a war-ravaged compound – unleashes your inner assassin while opening an abundance of opportunities to take your revenge.

With the end game focused on the assassination of the Uruk War Chiefs, 'Shadow of Mordor' leaves the door hanging off its hinges with the variety of options available to succeed. Not the least of which is the game's Nemesis system. Unlike anything I've experienced in a video game before, it prompts the player to explore further and strategize in ways otherwise not considered when preparing for forthcoming battles. 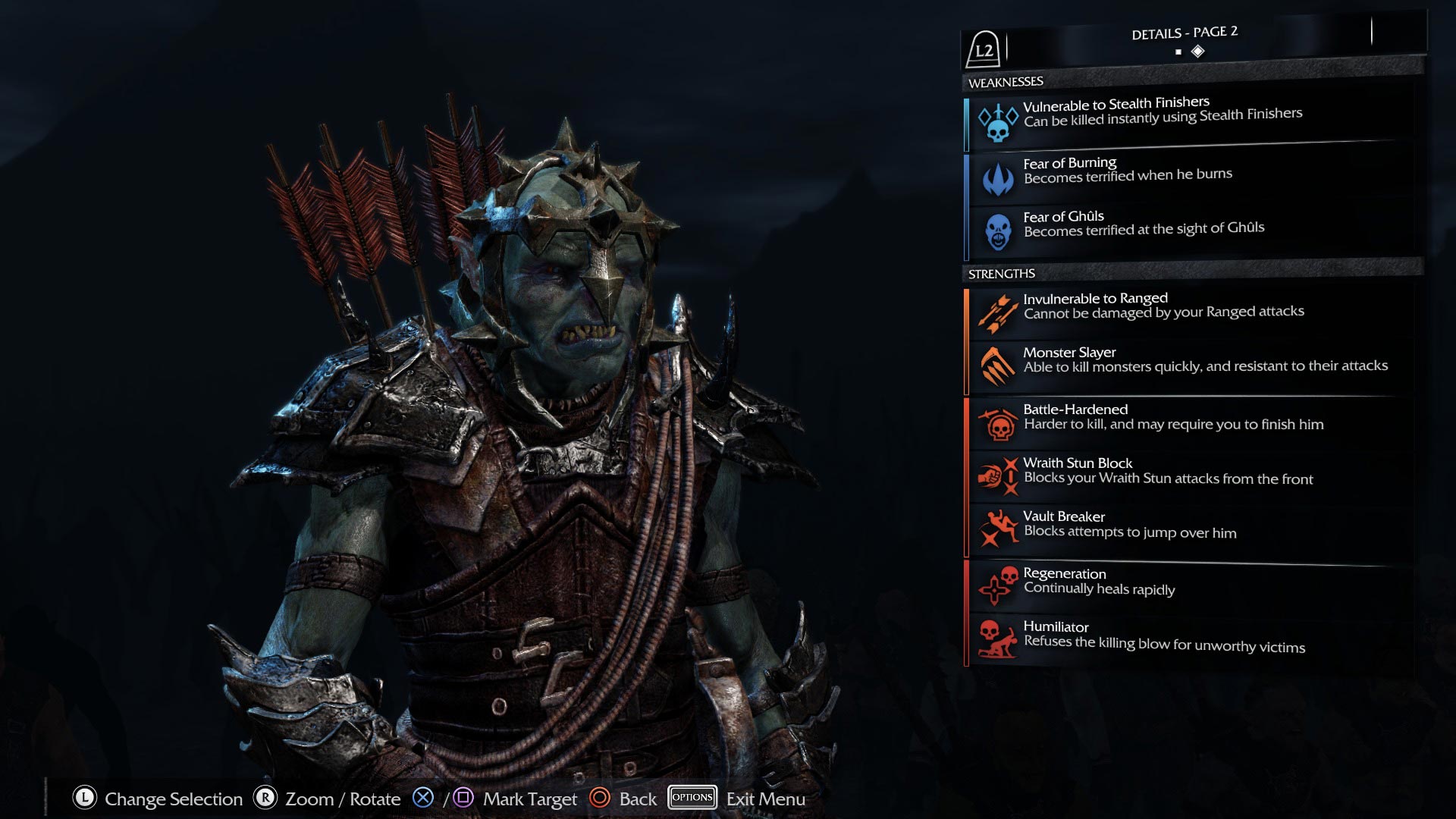 Through the gathering of intel, or the interrogation of lesser Uruks (think Spock's mind-meld), the Nemesis system reveals the individual strengths and weaknesses of those that you hunt. Perhaps your victim has a fear of fire, or is immune to ranged attack. Maybe they are cowards when faced alone, or become enraged when taking damage. How that information is ultimately used is up to the player. If used to your advantage, it will likely result in great success. If thrown to the wind and ignored, prepare for epic failure.

But here's the thing about failing in 'Shadow of Mordor' - Talion cannot 'die'. Instead of forcing game replay, 'Shadow of Mordor' punishes the player in more creative and 'realistic' ways. With each death blow that Talion receives (before being subsequently resurrected) the Nemesis system opens up to reveal the true consequences of your failed attempts – the powering and ranking up of the Uruk(s) that struck you down. Where once there was a lowly grunt, these death-dealers now command a pack of hunters as a Captain among the ranks.

As impressed as I was seeing the highly talked about Nemesis system in action, there was the rare event that seemed a bit off kilter. On several occasions early on in the game I bit off more than I could handle and fell to a random attack of Caragors – four-legged beasts that roam the landscape of Mordor. With not an Orc or Uruk in sight, Talion's brief death resulted in the ranking up of numerous enemies. I'm still scratching my head and pondering those repercussions.

Fear not, Orcs aren't the only creatures in Mordor that grow stronger with experience. Talion has an abundance of Ranger and Wraith abilities to choose from that provide greater strength, quicker reactions, and interesting weapon upgrades. And with a world as large as Mordor, the map consistently radiates with side missions and hidden treasures to help you realize Talion's true powers that much quicker. Challenging and defeating higher ranking Uruks will drop runes specific to one of your three weapons: bow, dagger, and sword. Attaching these runes to unlocked and available slots within these weapons can dramatically alter your style of gameplay. Having the option to swap out runes and not be tied to your initial decision is a nice touch and speaks to greater replay value. 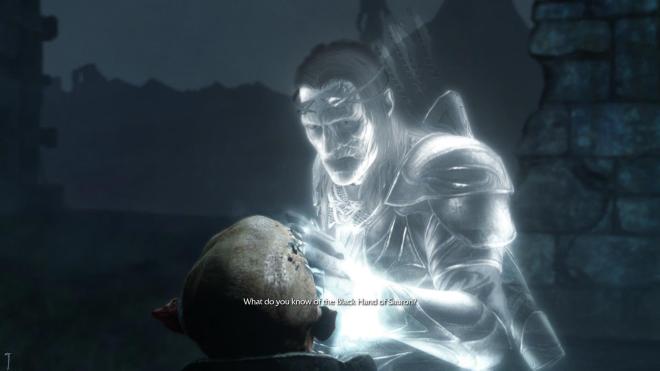 On the PlayStation 4, 'Shadow of Mordor' is an attractive looking and smooth running game from start to finish. Character models, both human and beast, exhibit a great amount of detail, with the real highlight shining through in the environmental effects. In particular, Talion's nocturnal activities provided the greatest amount of detail. Stalking along the edges of cracked and crumbling walls, with rain changing to hail and lightning streaking across the sky, were some of the best visuals I've seen to date. Watching the hail bounce off every surface impressed on a level of realism that was often mesmerizing.

However, it seems that even with the power of current consoles, developers continue to struggle with an erratic and often disruptive third-person camera. All too often I found myself precariously surrounded by a growing number of Uruks, pressed into the corner of a canyon or structure, when the camera would come unhinged, lose all coordination, and zoom in to an uncomfortably close angle. With an angle that was generally too close even during the best of situations, this behavior often resulted in a mad dash for open ground or a quick death. 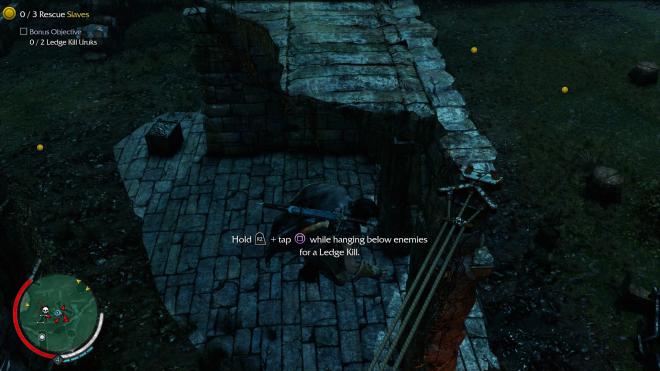 With a cast of veteran video game voice actors headed by the likes of Troy Baker ('The Last of Us', 'Bioshock Infinite') and Nolan North ('Uncharted', 'Spec Ops: The Line'), it's not surprising that 'Shadow of Mordor' excels in its character performance and delivery. These actors have been perfecting their craft for many years now, and their talents continue to shine with this latest effort. Just as impressive, the first meeting with Gollum prompted me to pause the game and verify that the voice actor was in fact not Andy Serkis from Peter Jackson's enormously popular 'Hobbit' and 'Lord of the Rings' movies – it was that good.

Adding to the highly immersive soundtrack reminiscent of the big-budget movie franchise was the wonderful use of the DualShock 4's built in speaker. Often utilized to represent the supernatural world of Middle Earth, it left a lasting effect and was a welcome addition to an already high quality audio sound design. 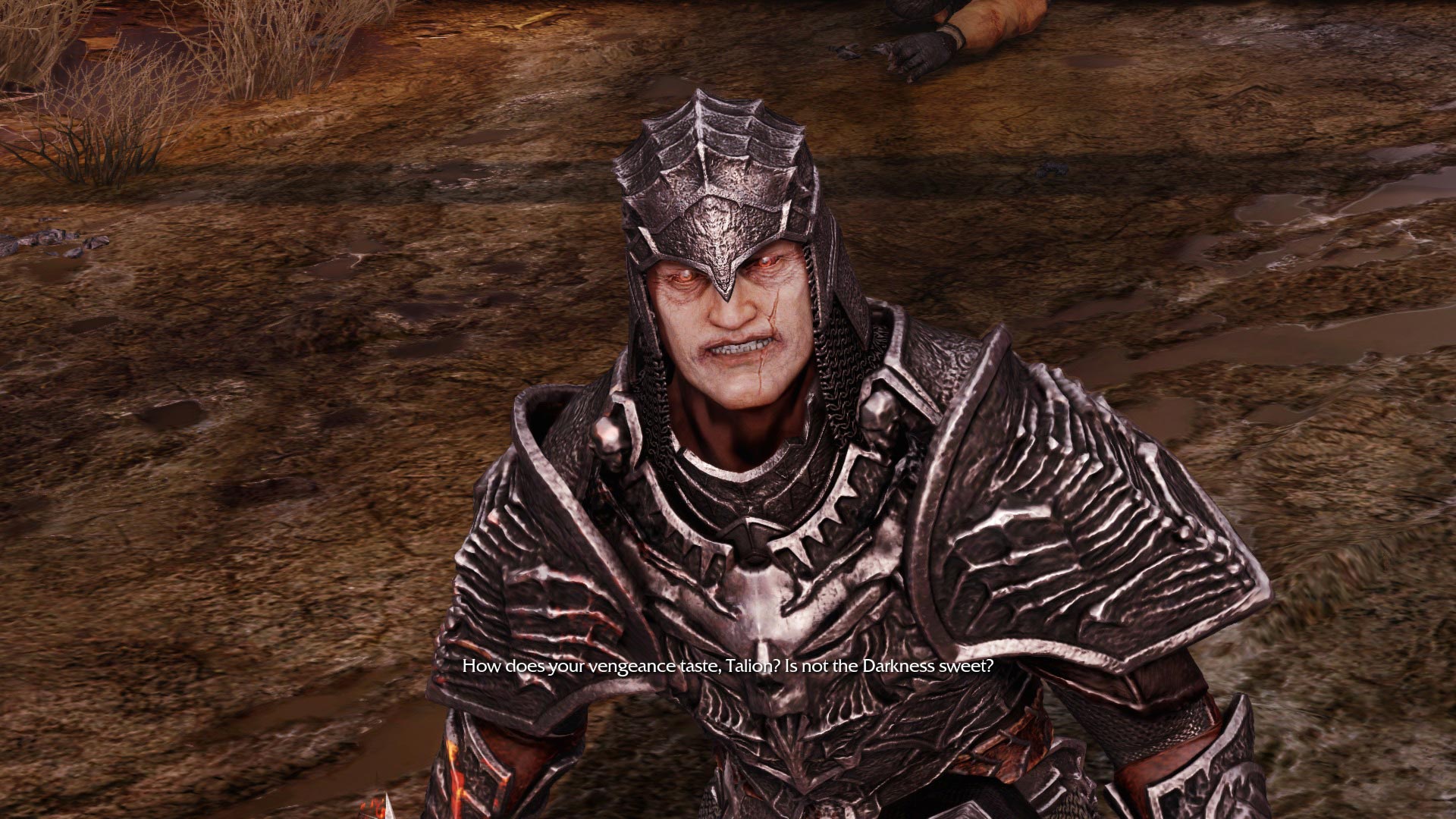 Completing everything that 'Shadow of Mordor' has to offer in a single play through is likely to keep you busy for 20 or more hours. Having the option to change your gaming style – from an offensive attack strategy to a more stealthy approach – is reason enough to give the game another look. Perhaps the second time through you infiltrate the ranks of Uruks by commanding a legion of spies. Maybe the next time you wander the land of Mordor you become an expert at the bow and leave melee combat behind. In the end, whatever your decision may be, there are enough options available to warrant further exploration of Monolith's newest IP. 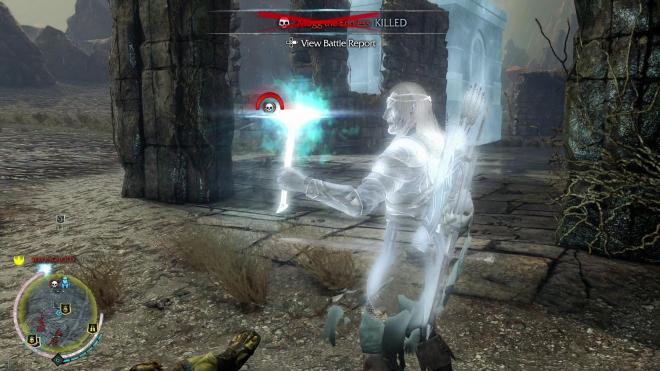 I've been a fan of J.R.R. Tolkien since I was a boy. The fantastical world he created never disappointed, regardless of the entertainment medium it was presented in. His books kept me awake long into the night and Peter Jackson's film adaptations often left me breathless. While many of the video games based in this fantasy world have often been hit or miss, it's safe to say that 'Middle Earth: Shadow of Mordor' has lived up to my very high expectations as being my most anticipated game (and let's not forget new franchise entry) of 2014. It took everything that I love about the action/adventure genre and brought it to life in wonderfully immersive ways. Monolith Productions has earned some serious bragging rights not only with what they've done for the epic fantasy franchise, but for what they have developed with their Nemesis system. Their many accolades and high praise are both warranted and justified. 'Shadow of Mordor' should not be missed.