The Game Itself
3 Stars
The Video: Sizing Up the Picture
3 Stars
The Audio: Rating the Sound
3 Stars
Replay Factor
2 Stars
Bottom Line
For Fans Only

This summer in June, 32 of the world's best soccer teams are descending on Brazil, home of the beautiful game, to determine a champion. And like every time before, EA sports has released a special World Cup edition of its annual FIFA Soccer game to commemorate the occasion. Promising 203 national teams, 7,469 players, 19 officially licensed managers, and the 12 World Cup venues, '2014 FIFA World Cup Brazil' would seem like must-own for soccer fans. The game is even billed as having a Road to the FIFA World Cup mode for fans looking to really get into the lead-up to the World Cup as well as the actual congregation. That said, this is a game only for the 360 and PS3, with no mention of the Xbox One and PS4. And that's likely because it's only been a few months since 'FIFA 14' hit those platforms.

So should you buy this game? That depends on how you answer the questions below:

-Do you already own 'FIFA 14?'
-Do you get angry when DLC is passed off as a full game?
-When a game's framerates drops below 15 do you chuck your controller at the TV?
-Does the lack of a functioning lobby in online multiplayer make you scream into your microphone?

If you answered yes to any or all of those please DO NOT BUY this game. 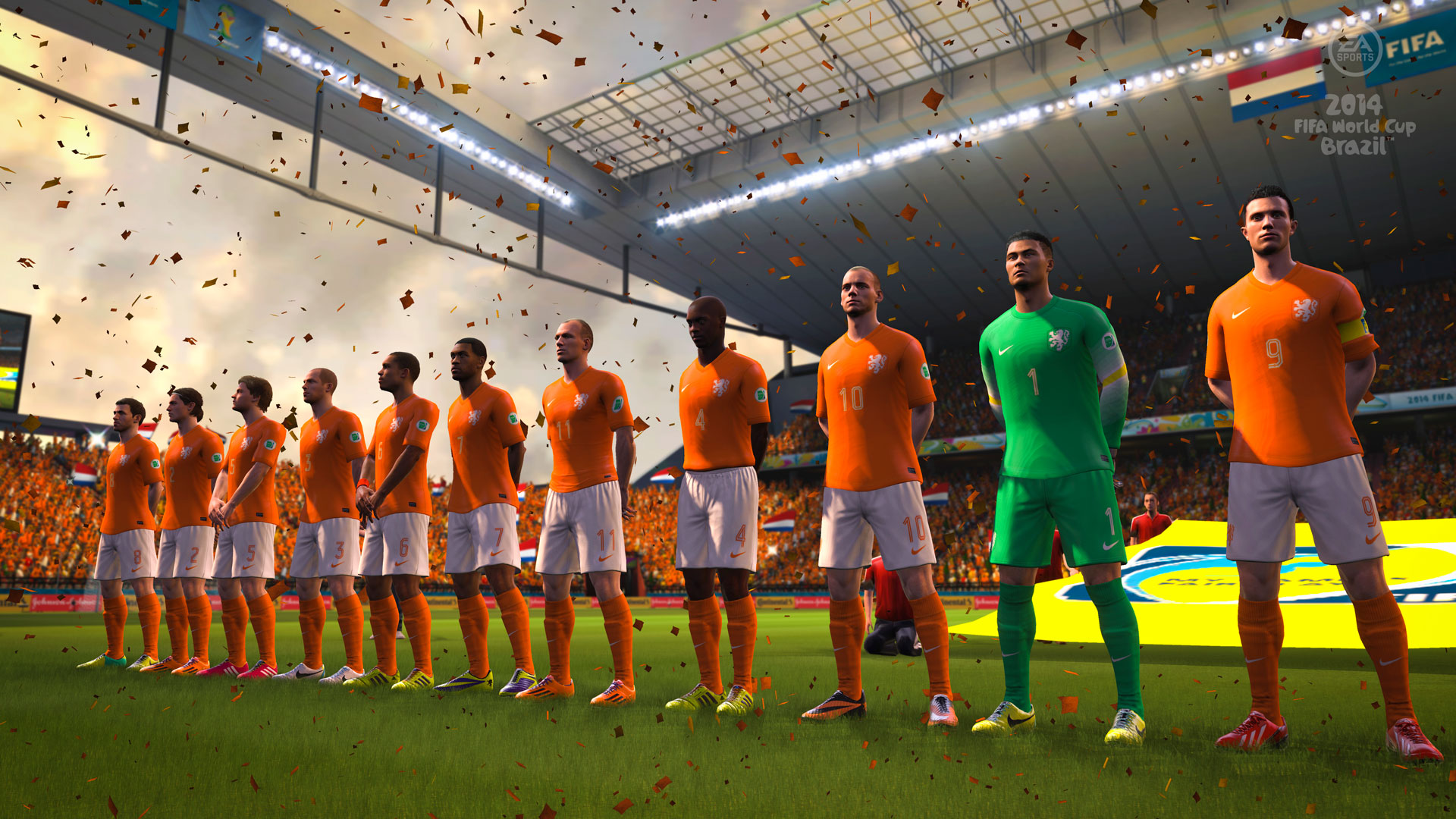 For those that have read our FIFA 14 review much has stayed the same. Defenders still magically catch up to you by shrugging their shoulders and the full backs still have no idea how to play an offside trap. Of course, these are issues that have plagued video game incarnations of soccer for years so it was semi-expected. What wasn't expected is the drastic decline in playability due to a horrendous drop in frame rate. In 'FIFA 14,' I play in tele camera mode with maximum zoom out and the highest tilt possible. This enables me to almost see the entire field and is also what allows the cross field passing and long balls that are essential to realistic play. In '2014 FIFA World Cup Brazil,' the frame rate absolutely drops through the floor when in this view. Surprisingly, I have yet to find any new graphical upgrades or new textures that would warrant such a drastic decline. I can only guess they must have spent all that processing power on new audio commentary that they implemented. Thanks guys! I really needed to know that tidbit about Hong Kong's political history with China and dragons. 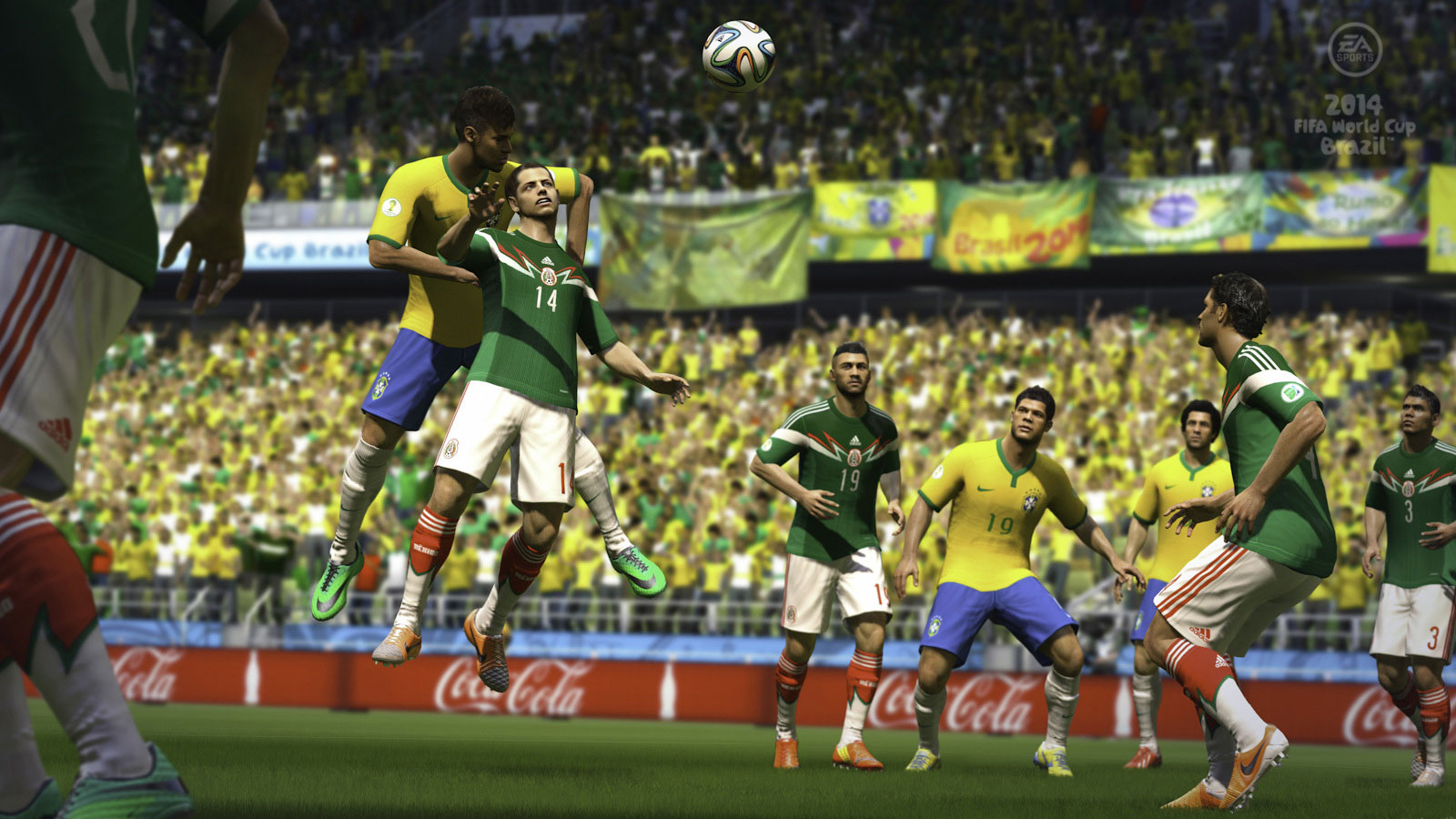 This slowdown isn't limited to just in game. Scrolling through the menus, trying to pick a formation, subbing a injured player off, all these subtle things take a lot longer to get through. It's almost like there is too much information to load and the processor just can't keep up.

On the plus side, where EA has always shined is the presentation and this game has it in spades. '2014 FIFA World Cup Brazil' contains almost every national team on the planet with all 204 nations that participated in the qualifying included, each complete with fully updated rosters and stats for every single player. If you wanted to know what the fourth center back for Niger's name is and what he's rated, this is the game for you. 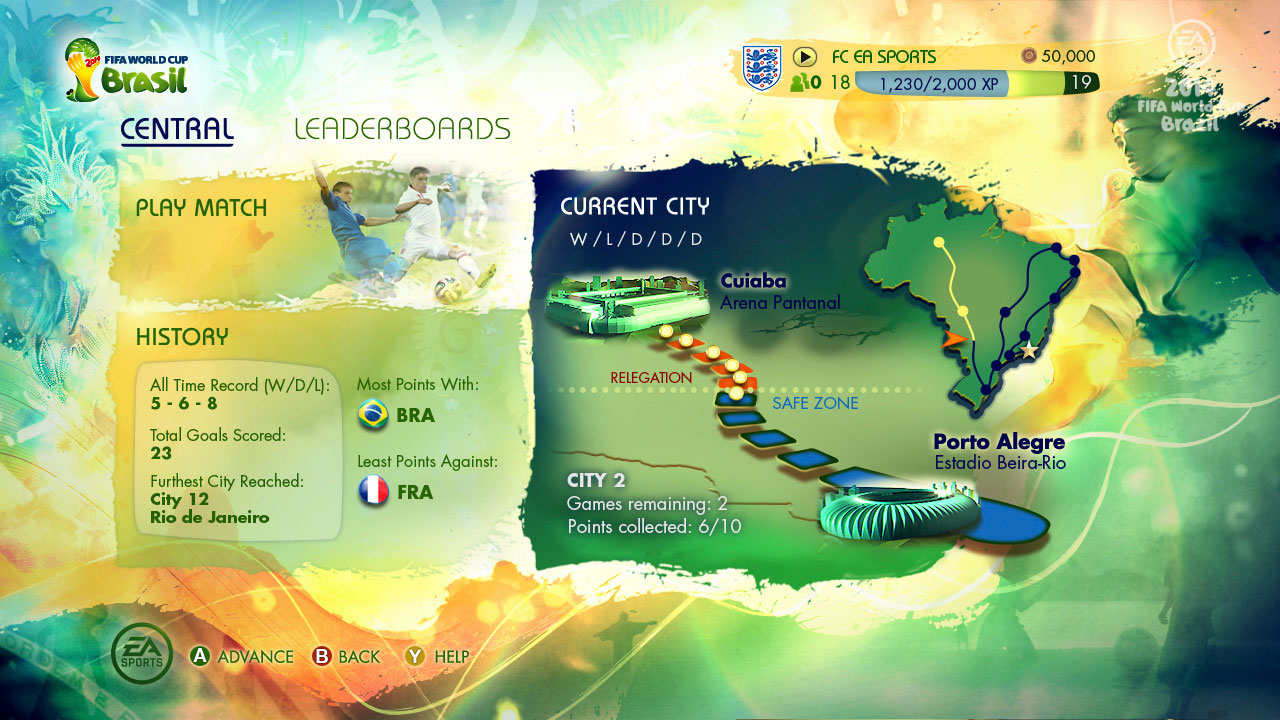 After booting the game up for the first time, you will be asked to pick your favorite national team. Afterwards all the menus and game screens will be outfitted with a custom back ground and the nation's flag and colors. I have to admit it really does give you a dose of national pride. 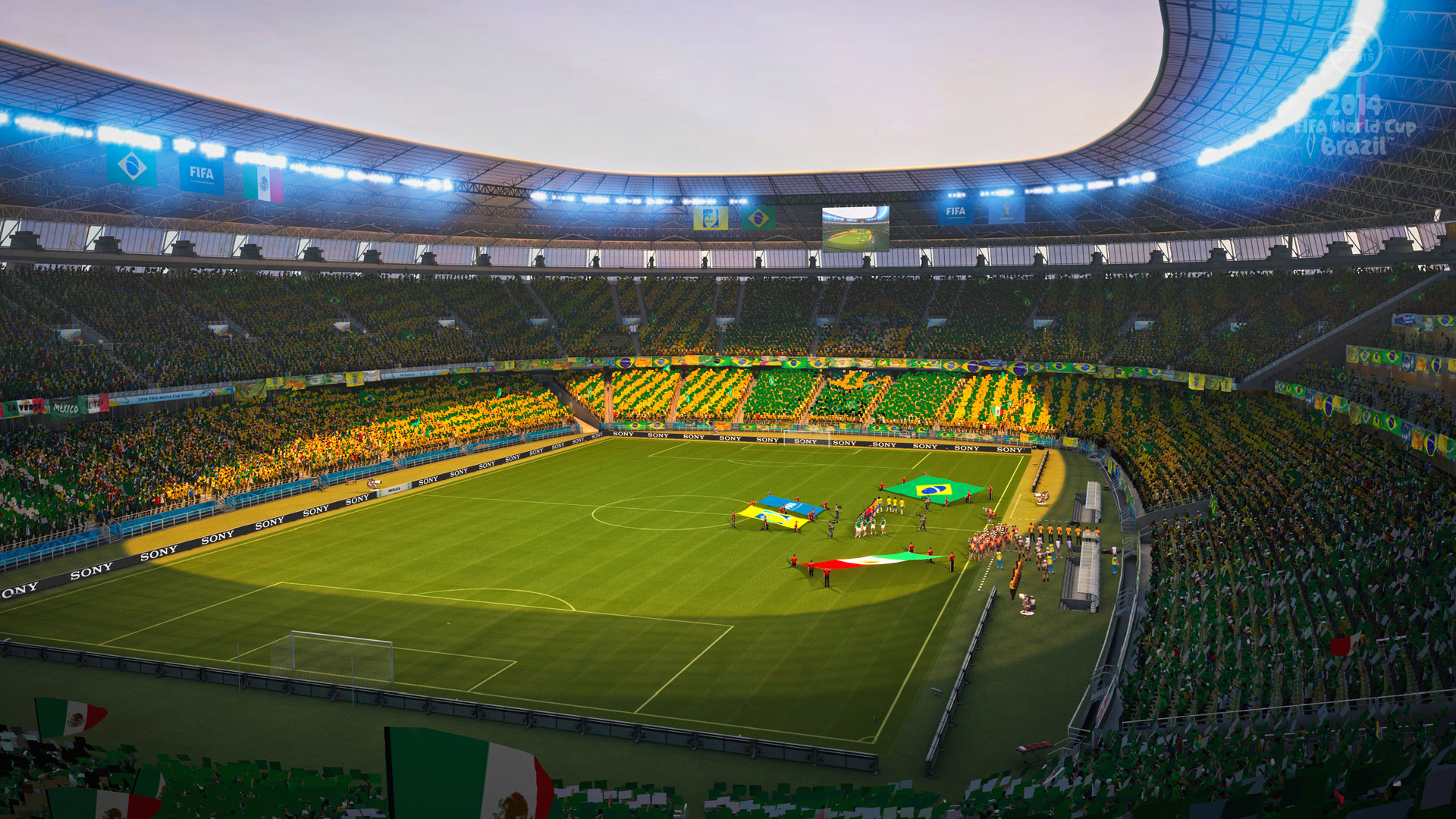 The graphics look good and the stadiums are gorgeous. Because they were limited to just the World Cup venues, EA has really gone all-out with the detail. When the pre-game introductions start you can really get a good look at these majestic stadiums rendered down to the tiniest detail. The players and animations are copied directly from their 'FIFA 14' counterparts so on a whole they are excellent.

The only downside is the abominable frame rate which to be fair is not nearly as much of an issue in the default camera mode. However, I have yet to meet a competitive 'FIFA' player who doesn't use the same camera that I do so it's a bit of a mixed bag.

The soundtrack for the game features an entirely different mix then that one in 'FIFA 14.' New music was added with many songs infused with a Brazilian-themed performed by such artists as Tinie Tempah and Switchfoot.

Additionally, "We Are One (Ole Ola)" by Pitbull, Jennifer Lopez and Claudia Leitte, the official song of the 2014 World Cup is used in the game's opening cut-scene. Like I said, EA does not skimp on the licensing and when money is no object.....

The one major change is the inclusion of EA Sports Talk Radio. It features game-related commentary by Andy Goldstein, Ian Darke and "The Men in Blazers" (Michael Davies and Roger Bennett) and is culled from over 50 hours of recorded audio. The commentary dynamically adapts to your campaign and is a significant upgrade on the old commentary in 'FIFA 14.' Unfortunately, this feature only works in the three campaign modes "Road to the FIFA World Cup", "Road to Rio de Janeiro" and "Captain your Country". 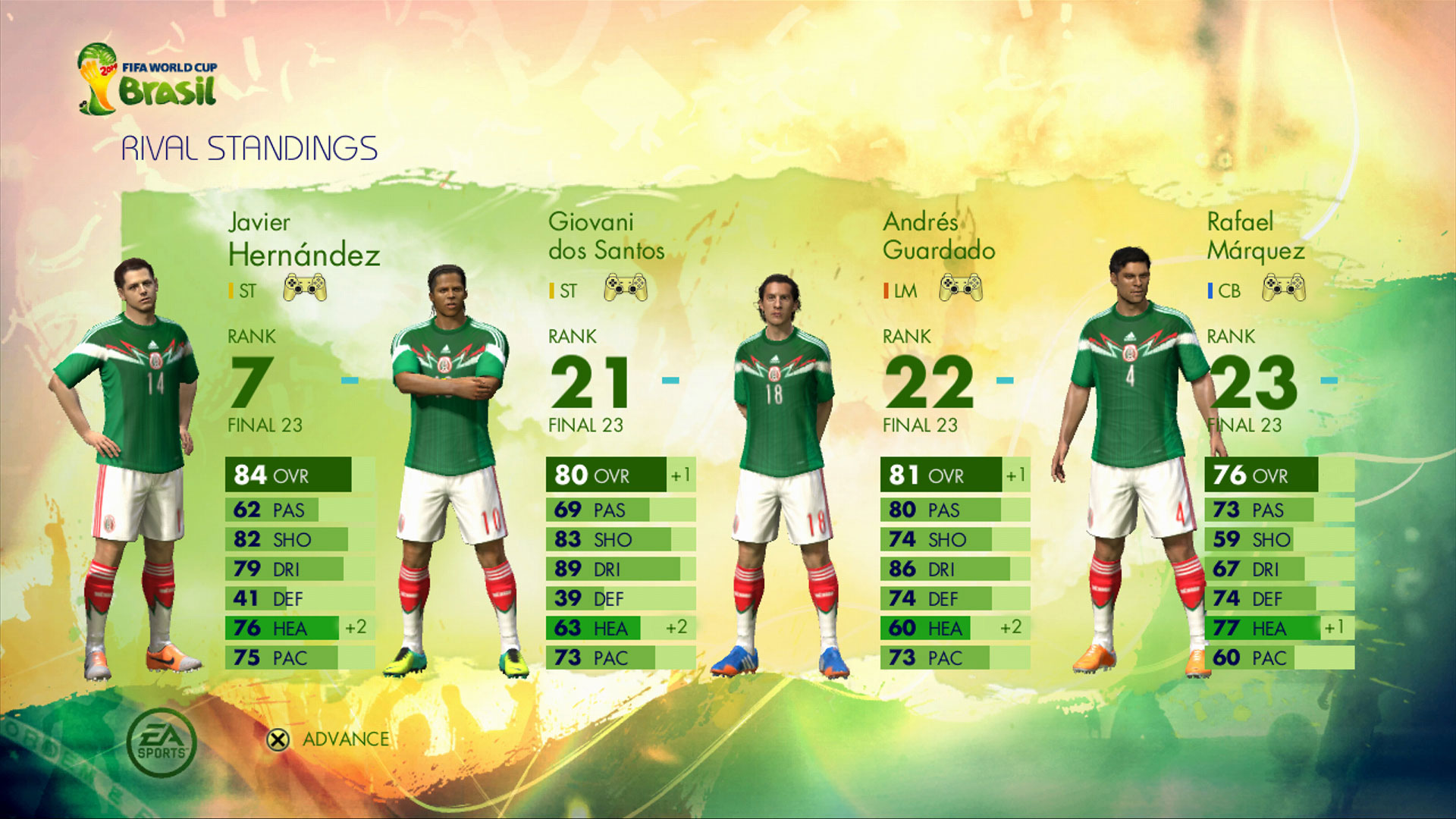 Unless you are a fan of Captain your Country, which is a great mode that lets you go from fringe player to national captain, there is little reason to play '2014 FIFA World Cup Brazil' over 'FIFA 14.'

This game is strictly a marketing tie-in to a once every four year sporting event. Basically, 'FIFA 14' with a new coat paint. 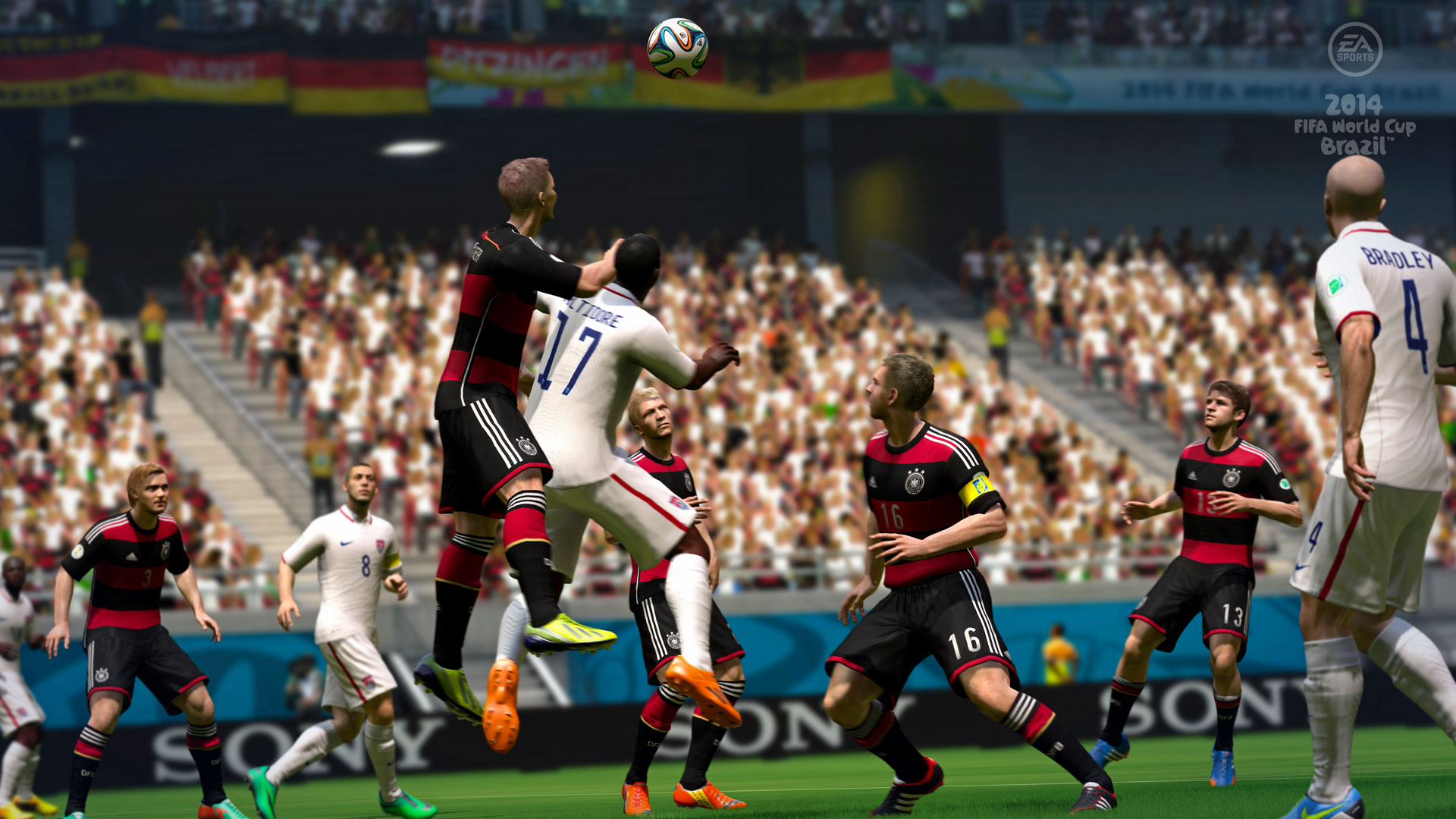 As a soccer game, '2014 FIFA World Cup Brazil' is passable if you have no other reference to judge it on. The 'FIFA' engine is fun and arcadey without being outlandish and the presentation as always is top notch. The faults lay in the fact that its predecessor is a much more polished and content laden game. 'FIFA 14' has a lot of the top national teams that 99% of the gamers out there will choose in '2014 FIFA World Cup Brazil' plus all the club teams and the popular Ultimate Team card game. If you are hosting a 'FIFA' watching party and need something to warm up your crowd this could do the trick. At the very least its pre-match introduction videos gave me the same sense of anticipation as the real games, which is really all the game was meant to do.