PS4 version reviewed. The game offers a one-time import of save data from either 'Dynasty Warriors 8' or 'Dynasty Warriors 8: Xtreme Legends' on the PS3 as well as ongoing Cross-Save functionality with the PS Vita version. Review playthrough was done with a fresh save and a significant does of Remote Play.

Even in moving to the PS4, 'Dynasty Warriors 8: Xtreme Legends Complete Edition' maintains the basic winning formula pioneered on the PS2 with 'Dynasty Warriors 2.' (This is a franchise that is numbered differently in Japan and is really the seventh numbered title, a fact which is occasionally made obvious in the game's UI.) Regardless of mode, you play in third person as one warrior on a large battlefield. In the Story Mode, you pick one of three houses (or the new Lu Bu campaign), pick one of the 82 characters and proceed to fight in large-scale battles against thousands of enemies all themed after 'The Romance of the Three Kingdoms.' As on the PS2, you have a basic strike attack, a charge/heavy strike attack, jump, and a charge meter-based Mosou attack as the foundation of combat. Though this latest game adds lots of wrinkles, such as another metered attack, Rage, the basics from the PS2 era could be enough to play well. 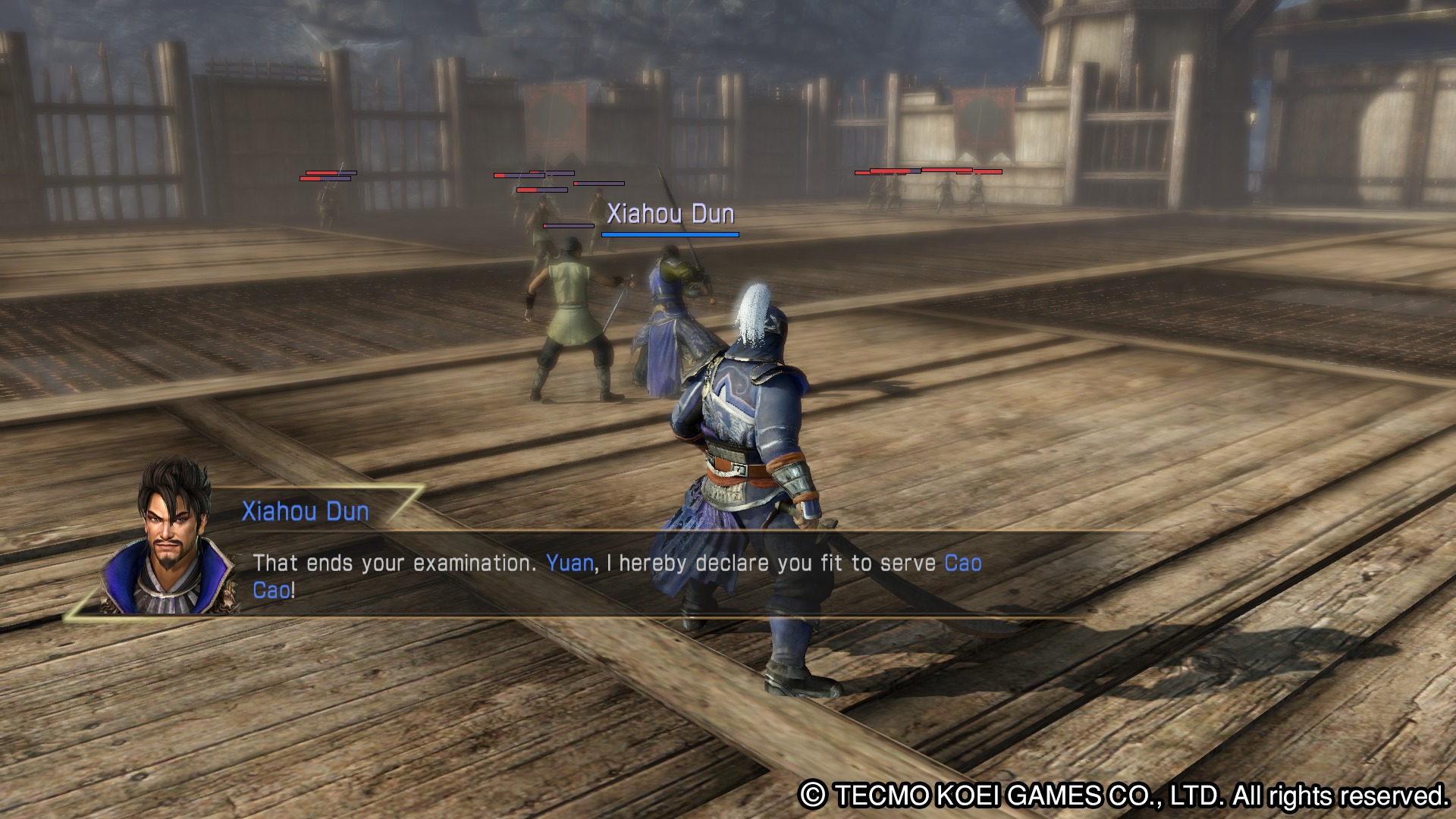 You still face battles knowing that it's important to keep your allied officers alive while taking out enemy officers amid the thousands of lesser enemy soldiers. You still race around the battlefield using your mount, and watching out for unexpected events or changes that require your immediate attention. You can still saunter up to an enemy officer, knock he or she down and then run around to their backside to be able to immediately hit them in the back when they stand, unleashing your charged Mosou attack whenever you feel overwhelmed or to make the best use of a 30 second attack times two power-up. And you can still run away to try to find health, hoping that the time spent looking doesn't mean a defeat-inducing event.

You see, 'Dynasty Warriors 2' on the PS2 really hooked me. The battles were epic, great at telling a story while providing a grand button mashing challenge. 'Dynasty Warriors 3' expanded on everything with more characters, battles (old battles were redone), weapons, and a two player mode, but it also was followed up by an expansion. I played so much 'Dynasty Warriors 3' I had to hack my PS3 memory card so I could have different save files in order to have room for each character's Story save. When 'Dynasty Warriors 4' came out, I decided to wait until the inevitable expansion. When 'Dynasty Warriors 4: Xtreme Legends' hit, I played it once, and was shocked to find it only contained the expansion content. This staggered releasing of incomplete games, (well before the era of DLC) coupled with a fatigue of a basic formula made it easy to stop playing the series though I did play one 'Gundam' version on the PS3 just to see what is was like. 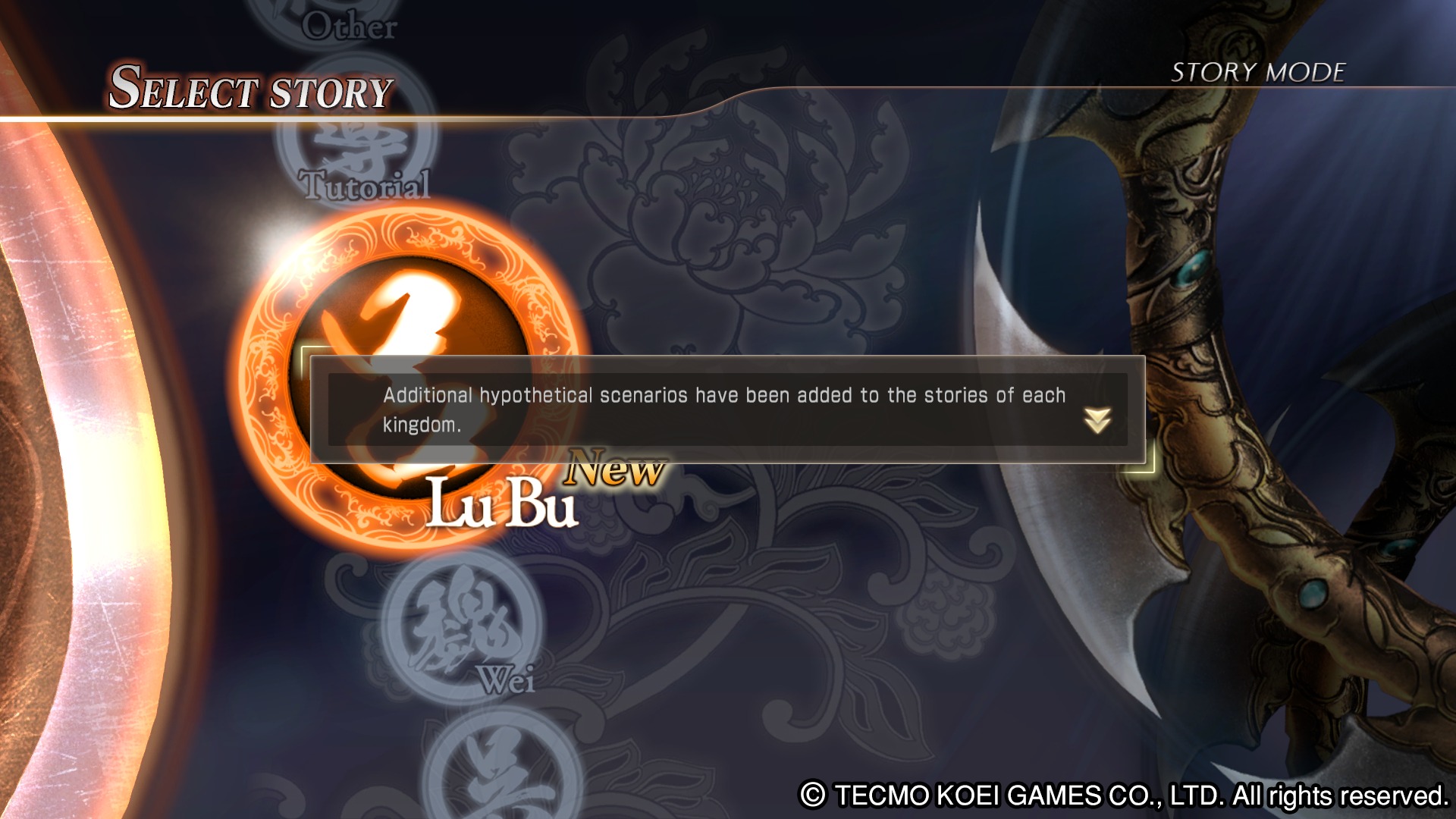 Going into 'Dynasty Warriors 8: Xtreme Legends Complete Edition,' I was glad to finally get a "complete edition," but my expectations for the game were not all that high. Ultimately though, while it is still that old design at its core, a series of refinements, as well as the staggering amount of content in the game came as a revelation, an addictive revelation.

The game's weapon system, which has you looking for and equipping dozens of different weapon types, each with a dozen or so different possible elemental properties, completely reinvigorates the old formula. A character can carry two weapons at a time, which allows for dramatically different attack styles for any character at any time. (Any character can equip any weapon but each character does have an affinity for certain weapon types that grant attack bonuses.) As the characters gain levels, they can gain more Mosou chargess, and in effect they have a much larger variety of attacks available through combos, EX weapons, alt Mosou, true Mosou, Rages and Rampages. Even just switching between the two carried weapons can incite a unique attack. 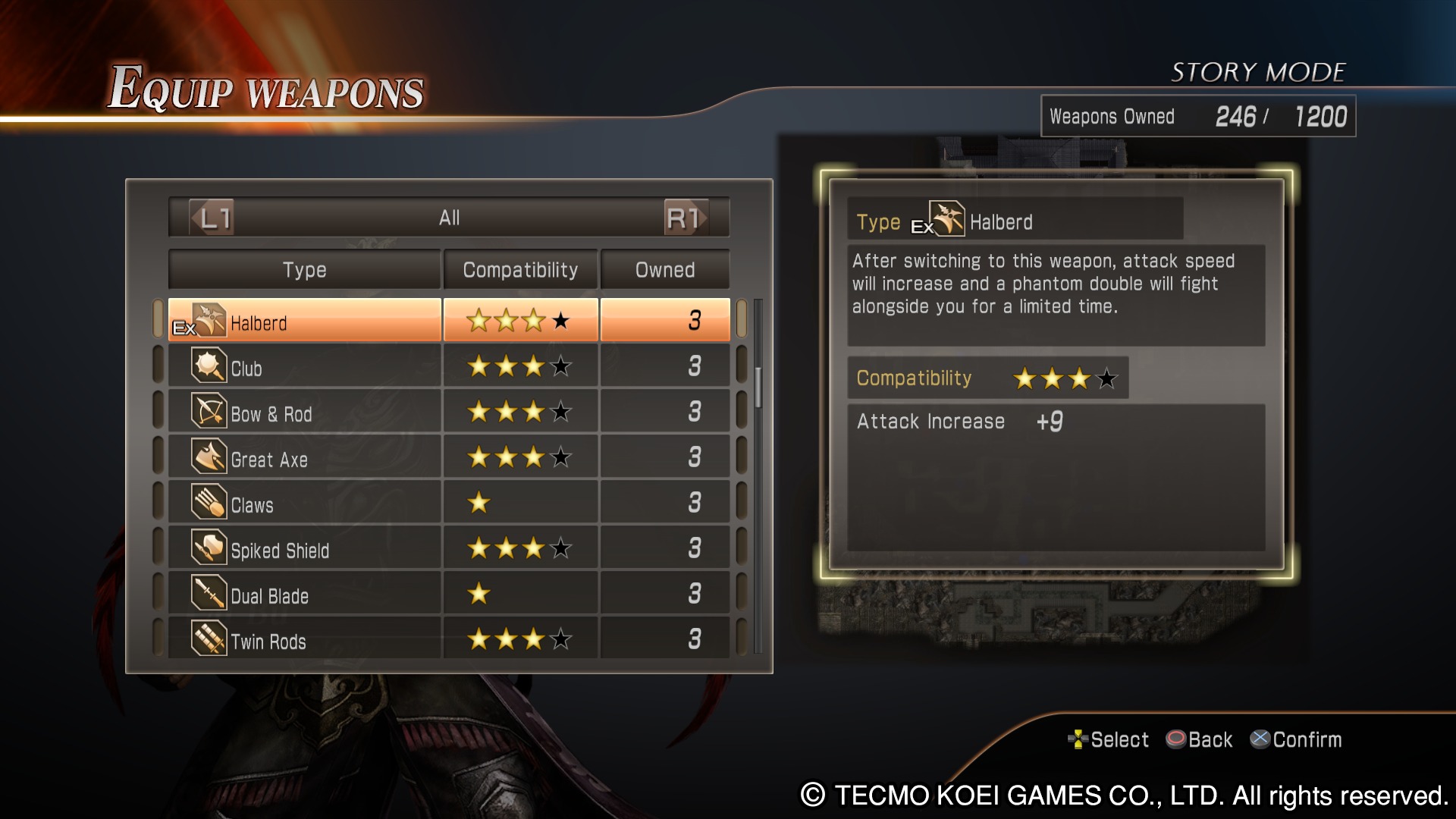 So while the game's storytelling isn't as fresh as it once was, the Story battles offer a different level of combat depth than I was expecting from the series. The game has multiple difficulty levels (there's even a new 'Ultimate' option), but I also found that individual battles can vary greatly. Equip a new weapon in-between battles, and you may feel overpowered (I had a 1500 combo going at one point), but then in the next battle, you may still be challenged by that battles pivotal constraints, which then knocks you onto a different fork in that campaign.

Like the added combat depth, the desire to beat enemy officers in search of a better weapon (for either your current or future character) helps with what can be long battles. After 2000 or 3000 K.O.s, a given battle can be tiring, and that's if you don't fail. But if the Story is just good enough to make the game fun, the Ambition Mode really ups the ante.

While the game offers both a Free Mode (for replaying unlocked battles) and a deep Challenge Mode, it's the Ambition Mode that seems to be the real prize. Dispensing with the narrative and campaign structure of Story Mode, in Ambition Mode, you pick a character and are then tasked to build up the marvelous Tongquetai from its current shabby state. 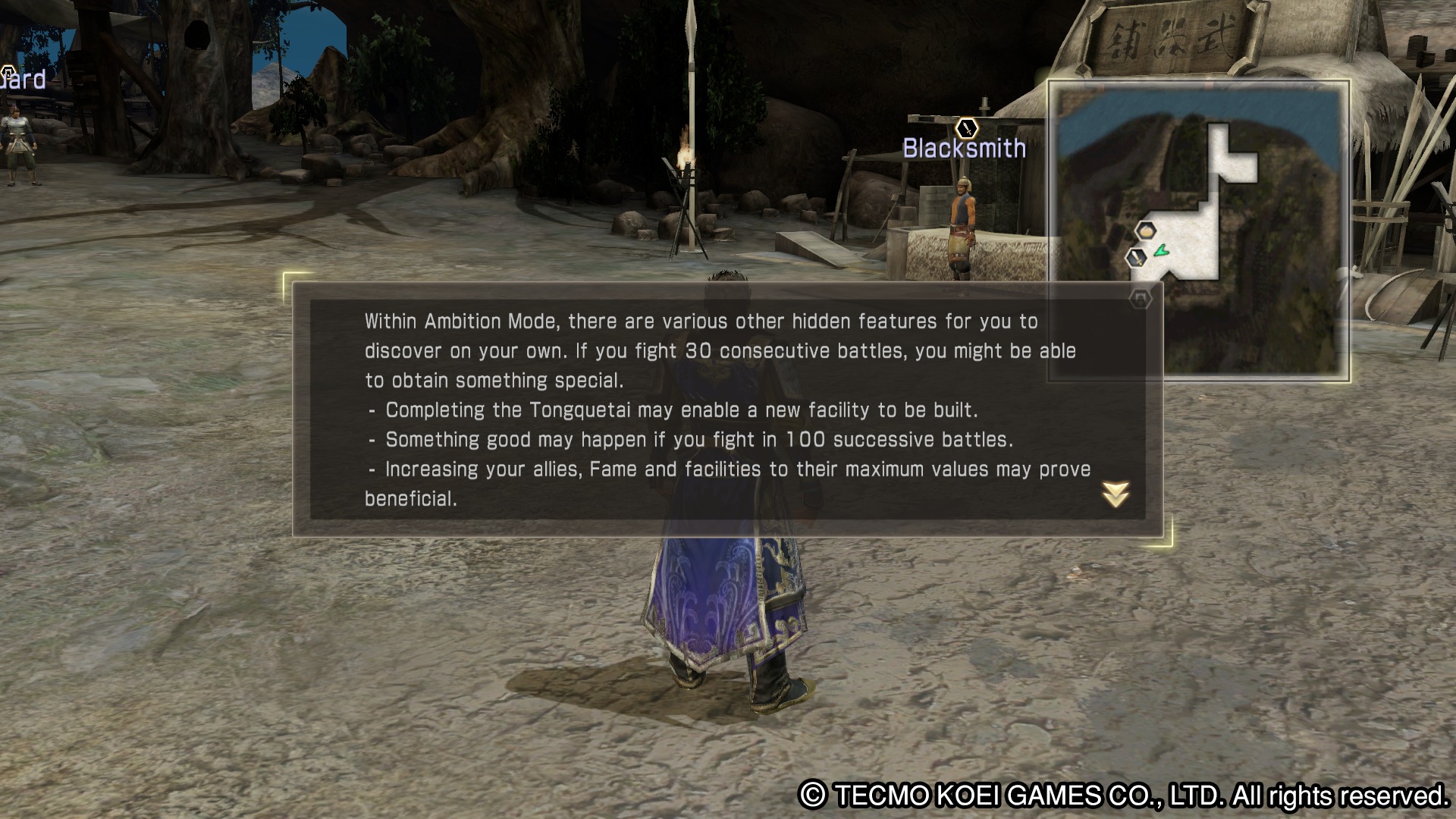 This is not unlike building Mother Base in 'Metal Gear Solid: Peace Walker' (or other mission based resource gathering games) as you take on relatively small battles of varying difficulty in order to gain allies, garner Fame, and get both Facility and Weapon materials. Like with Story mode, you still want to get new Weapons and gold whiel winning the battle, but each battle is a tighter experience. Not only are you often really fighting the time limit (with 30 seconds extra awarded for defeating an enemy officer or for every 100 K.Os), but even the smallest battle has optional objectives that spice things up. This mode seems really primed for the Vita, but the game also challenges you to take on successive battles for higher/unique rewards with a running health bar and time limit. Going back to Story Mode, and while it's still very fun, I miss the extra resources and in-battle challenges (which are really gambles). 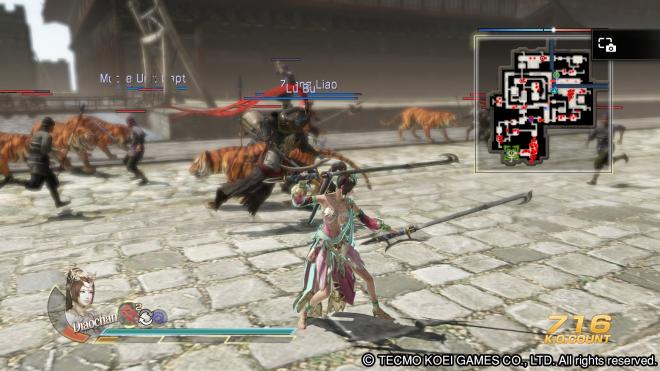 While the gameplay is so packed and varied as to be worth eight Dynasty Warriors thumbs up, the visuals are another department. After playing the game, I can easily state that it looks better than the YouTube comparison put out by Tecmo Koei. The PS4 version is a moderate step up in resolution with another step up in character textures, and the characters are really what shine in the game. The roster has blossomed to feature hordes of male and female designs, several alternate costumes, and some very extreme weapon or otherwise more unique designs.

The game also runs well, though it tends to occlude enemies and items, etc. before exhibiting serious slowdown like at the Battle of Hu Lao Gate. Still, the levels are both barren and unsightly, with long expanses of flat ugly surfaces that don't exactly benefit from a clearer picture. This is part quantity over quality, but the almost box world of most levels hearkens back to the PS2. When you get a speed boost, be ready to see the world pop in beyond the next turn or two. 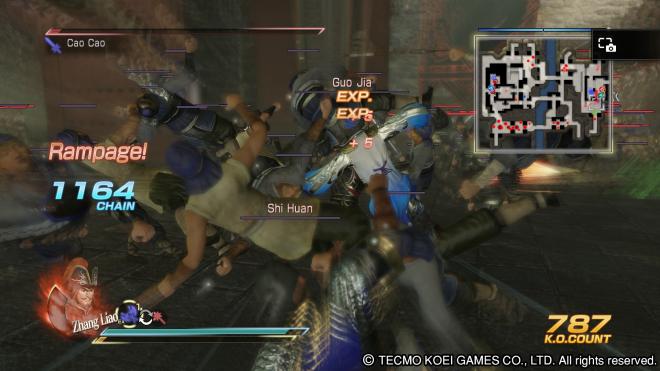 This will likely irk many fans. Though this version is the "complete one," it lacks Japanese voice tracks. Tecmo Koei has stated that they are likely to come as DLC later, which is just one of those bizarre moves as the game is out in Japan, presumably with a Japanese audio track in place. To be honest though, the English tracks that are there seem exponentially better than what I recall from the PS2 days. By no means are they great, but they are certainly tolerable. Having played the game, I no longer care if the equally just ok Japanese voices are released.

Officer voices output from both the PS4 and from the DualShock4, which doesn't accomplish much beyond a slight echo.

The game maintains the same not quite metal rock soundtrack, and while it's not as bad as it might be, I can't help but wish they could take a cue from the 'Soul Calibur' soundtracks. The game's sound effects are series' vintage, but the sound field is delivered well and weapon impacts maintain a healthy punch.

You could easily drop 100 hours in the game and not even have attempted much of the content available right out of the box. That said, if you want to play two player, you better have a partner, as you're not likely to want to attempt a 10-20 minute online with a random even if you could find one. 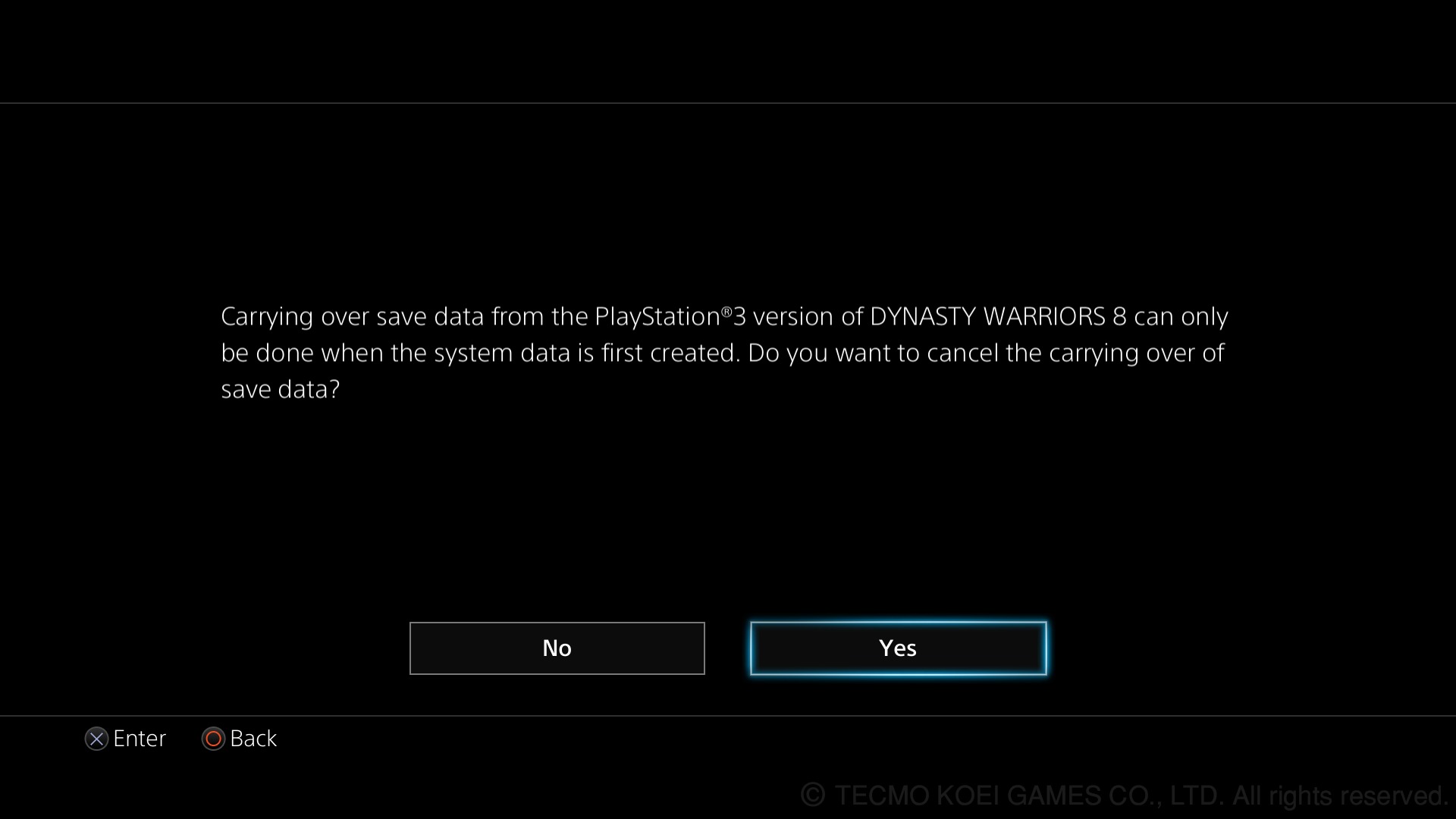 If you're stepping up from having drained 'Dynasty Warriors 8' on the PS3 of its content, it's not a certainty that the new Lu Bu Campaign, Random events, and Ex weapons will justify the purchase, but the "Complete Edition" on the PS4 still makes more sense than playing 'Dynasty Warriors 8: Xtreme Legends' on the PS3. The best thing about the mountains of content is that if you are getting fatigued with one mode, just switch to another and be refreshed. 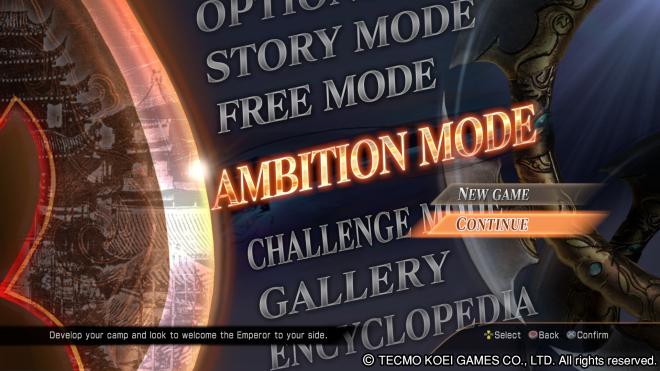 There is some DLC that is not included in the game, which feels like a cheat but it's fairly minor stuff, though more may still be to come. The game uses the touchpad for pausing, which is quirky when utilizing Remote Play, but the game is equally as great on the Vita. It's very tempting to get the Vita version and try out the Cross-Save. If you drop the $100 for both games, you should be able to play co-op across versions, though the local option on the PS4 version works fine. 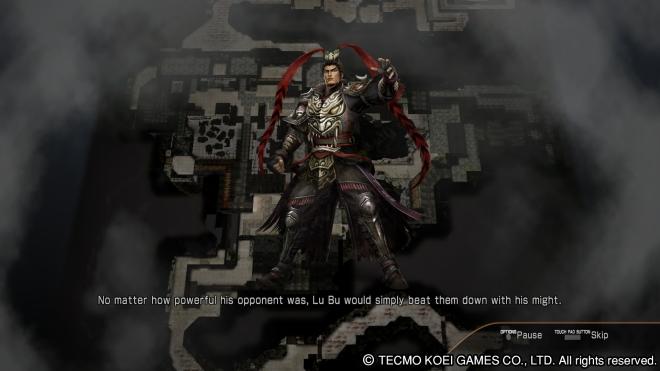 If you've given the franchise a serious try in the past and hated it, the gobs of content in 'Dynasty Warriors 8: Xtreme Legends Complete Edition' likely won't sway you, and the levels are even sadder looking on the PS4 than they were on the PS3. If you were to ever demo the game though, you'd likely get pulled in, suddenly wanting to chain a light strike into a charge attack into a Mosou attack in a Rage state so that you can Rampage while at Attack x 2 so as to demolish, say, Cao Cao's entire personal retinue of officers and soldiers. This is button-mashing with just enough depth to attempt a Zen state and possibly the deepest PS4 title to date. Suddenly, anticipation for that 'Legend of Zelda' 'Hyrule Warriors' game is through the roof.