The Game Itself
4 Stars
The Video: Sizing Up the Picture
4.5 Stars
The Audio: Rating the Sound
4.5 Stars
Replay Factor
2 Stars
Bottom Line
Recommended

Building another layer onto a long-running franchise, 'Wolfenstein: The New Order' is an attempt to reboot a series that arguably stumbled in 2009 with Raven Software's paranormal take on the 'Wolfenstein' universe. Muchhas changed since then.  Not only is 'Wolfenstein: The New Order' the first 'Wolfenstein' title to grace the new consoles, but it's also the first one developed after the acquisition of id by Bethesda parent Zenimax. As such, the game has a fresh developer behind it in MachineGames, and the game's marketing has done a great job of capturing a flavorful alternate history. Looks slick, but how does it play?

'Wolfenstein' as a franchise has some deep roots. If you are unfamiliar with the series, it began with the release of 'Castle Wolfenstein' in 1981 and really took off in 1992 with the first 3D version of the shooter. I can recall many nights as a child playing through 'Wolfenstein 3D' on my Dad's old Packard Bell machine. The series was also revitalized in 2001 with the release of 'Return to Castle Wolfenstein,' a version of the game with an extremely popular multiplayer mission mode for team deathmatches.

Interestingly, MachineGames and Bethesda went in a slightly different direction with 'Wolfenstein: The New Order' and decided to adopt an alternate reality timeline rather than stick with another 1940's era adventure. Starring everyone's favorite action hero William "B.J." Blazkowicz, the game uses a clever sequence in the first mission that puts our protagonist in a vegetative state for more than a decade. Picking back up in the 1960's, Blazkowicz is faced with a world that's decidedly surrendered to the Nazis and an enemy force that's flourished over the last 14 years. With warped ethics and no force to stop them, the Nazi party has advanced significantly on a technological scale.

Of course, all of this advancement has only escalated the Nazi's ability to commit horrific atrocities. MachineGames doesn't pull any punches when depicting atrocious acts such as human experimentation and forced labor camps. The villains in the game are equally as terrifying, both in appearance and philosophy. Vastly better than any previous 'Wolfenstein' title, the developer brings a level of depth to all the characters in the game. Blazkowicz actually has a personality in this go-around, one that's not just a mindless super soldier. The multiple internal monologues in the game are a welcome break in between the action and help pace the narrative, which spreads across a huge variety of locations, incredibly well. 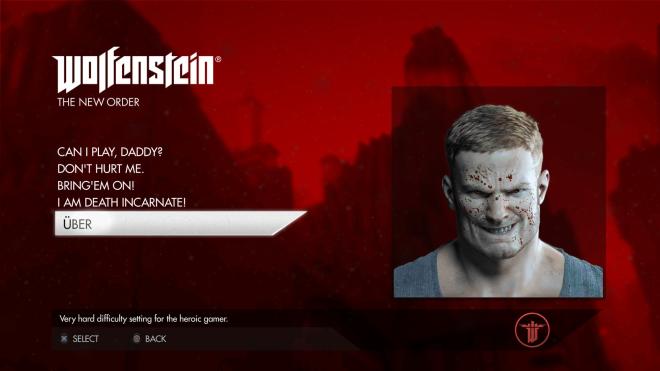 Beyond the story, there's a competent shooter waiting to be played. Every level offers the player the option of running in guns blazing or sneaking through the level slicing the throats of every Nazi you see. However, it seems like the developer favors the stealth route since there are specific Nazi leaders in each level that have the ability to sound an alarm to call for reinforcements. In addition to reducing the total number of enemies, eliminating those enemies first will also reveal secrets on the level map. Secrets can include treasure or communication files as well as weapon and armor upgrades.

If you have to break into a firefight, there's no shortage of weaponry available to the player. The developer has also included a dual-weapon mode for the majority of guns, ideal for blasting through legions of soldiers. Interestingly, you can load different types of ammo in each gun. One of my favorite combos for close range was two auto-shotguns, one loaded with regular shells and the other loaded with ballistic exploding shrapnel shells that bounce all over the environment. Of course, the A.I. isn't perfect when in battle, but there are a number of A.I. flanking maneuvers that will keep the player ready to blast away. 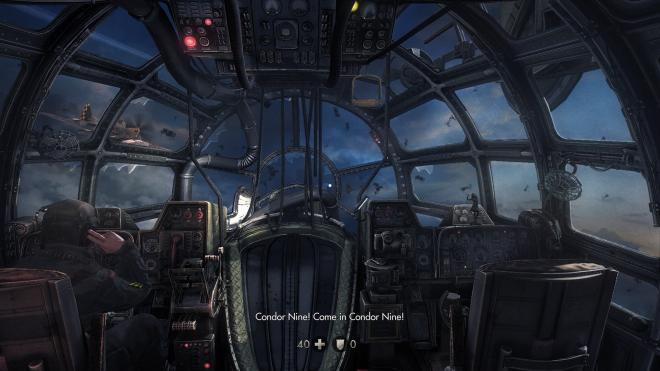 I loved the scaling system that automatically upgrades Blazkowicz's skills as the game progresses. Adapting to your playstyle, the stealth, assault, demolition and tactical skill trees will expand with new perks as you progress with specific goals. Prefer to stick to a stealth playthrough? You will receive perks such as additional throwing knifes or quieter footsteps when sneaking through a level. Prefer a more direct approach? You can unlock new weapon upgrades such as a flak cannon for the shotgun or a grenade launcher for the machine gun. Interestingly, these weapon upgrades carry over when you start a new game or play through a previous level.

Up to this point, I've heard complaints from fellow reviewers that dislike the game mechanic that requires the player to pick up ammo, guns and health. While it's clear that this type of mechanic has been dropped by many developers in the past several years, it really didn't bother me. I prefer to know exactly how much ammo I have ready to go at any given time and used the mechanic to know when I couldn't pick up any ammo before switching to the weapons that were maxed out. It's also a pleasant homage to Wolfenstein 3D, a game that I remember fondly growing up.

Visually, the presentation seems uneven in the various cinematic sequences throughout the game, especially Blazkowicz's character model. However, the in-game engine really looks great and the explosions of color provided by some of the more advanced weaponry simply dazzle on the screen. The developer does an excellent job of showing the contrast between the dismal hovels used by the resistance versus the luxurious accommodations utilized by the Nazis. In addition, the framerate is a rock solid 60 frames per second and looks absolutely gorgeous in high definition. 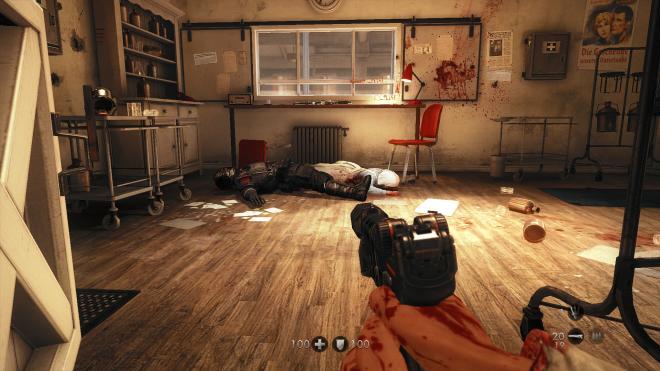 The voice work is surprisingly excellent, especially the multiple villains within the game. While William 'B.J' Blazkowicz doesn't have the best lines in the game, veteran video game voiceover actor Brian Bloom brings a patriotic, human flair to the character. In addition, the soundtrack within the game is surprisingly varied and pays quick a bit of homage to music made popular during the late fifties and early sixties. Beyond the score, I had no complaints with the extraneous NPC characters or the weapon sound effects throughout the entire story.

Ultimately, you will spend about 12 to 14 hours knocking out campaign the first time, assuming you are playing on normal difficulty or higher. People playing on easier difficulties can finish the game in 8 to 10 hours. If you are an obsessive completionist, you will find a ton of collectables within the levels. In addition, the game offers a split story path in the outset, but it doesn't offer a significantly different twist to the narrative. Be aware that there are no multiplayer modes within the game. However, the higher difficulty levels will offer a fun challenge to Wolfenstein gurus. 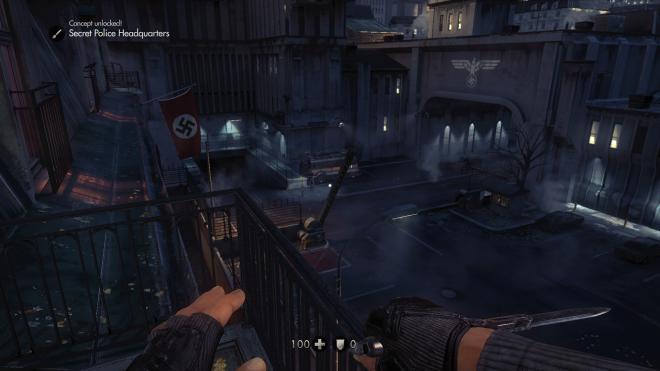 In the end, I ended up having a blast revisiting the franchise that originally got me interested in the first person shooter genre of games. While the gameplay has a few bumps, 'Wolfenstein: The New Order' is a fresh spin on the game, especially the focus on the Nazi's technological advancement rather than obscure references to the occult. It's significantly better than Activision's attempt to revitalize the series during 2009. If you are a fan of the original games or simply are looking for a solid shooter to jump into, you certainly can't go wrong with 'Wolfenstein: The New Order.'