The Game Itself
3 Stars
The Video: Sizing Up the Picture
4.5 Stars
The Audio: Rating the Sound
3 Stars
Replay Factor
3.5 Stars
Bonus Content
2 Stars
Bottom Line
Worth a Look

A mysterious, alien signal - received from the deepest recesses of uncharted space - has provided the technological advances to allow near-future earth the means to travel and explore further than ever thought possible. Seed ships are dispatched into the unknown in an attempt to discover the origins of the signal, while the colonization of endless worlds provides earth's population with a new way of life. All seems well in the universe, but unrest among the colonies develops and prompts chaos among the stars. Snuggled into the cockpit of a speedy and agile fighter spaceship, the player assumes the role of the faceless 'Andrews', a pilot whose voice is never heard and whose sole purpose is to follow the orders of the greater cause. 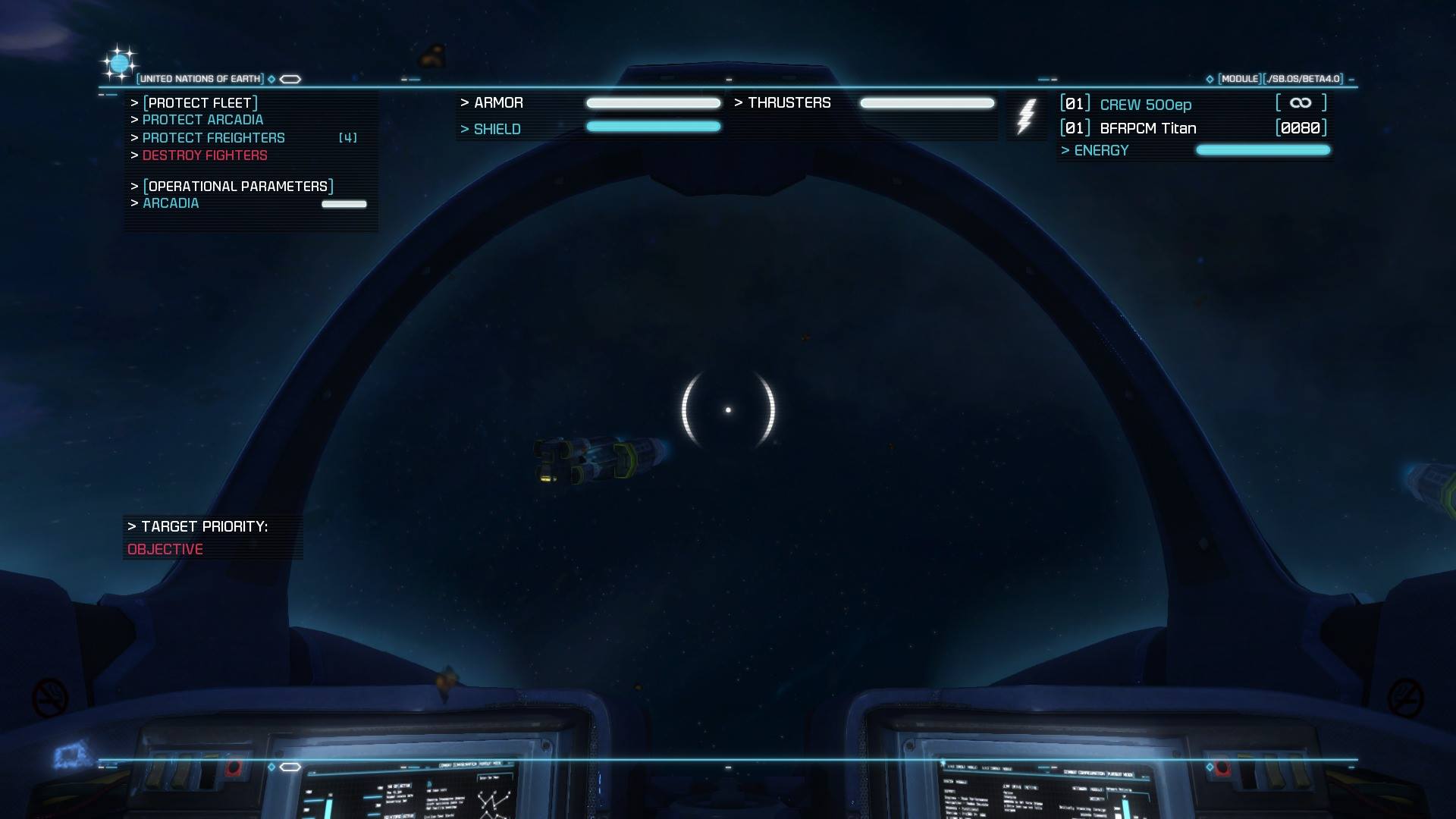 'Strike Suite Zero: Director's Cut' is a space shooter from start to finish. Get used to the coldness of space, because that is all you'll ever get a chance to see as you complete the dozen or so similarly-designed missions. Jumping from one beautifully rendered corner of space to the next, you'll have a few moments to admire and take-in the wonders of outer space before being directed to escort and keep safe a variety of vessels from the unending stream of unruly colonist war ships. 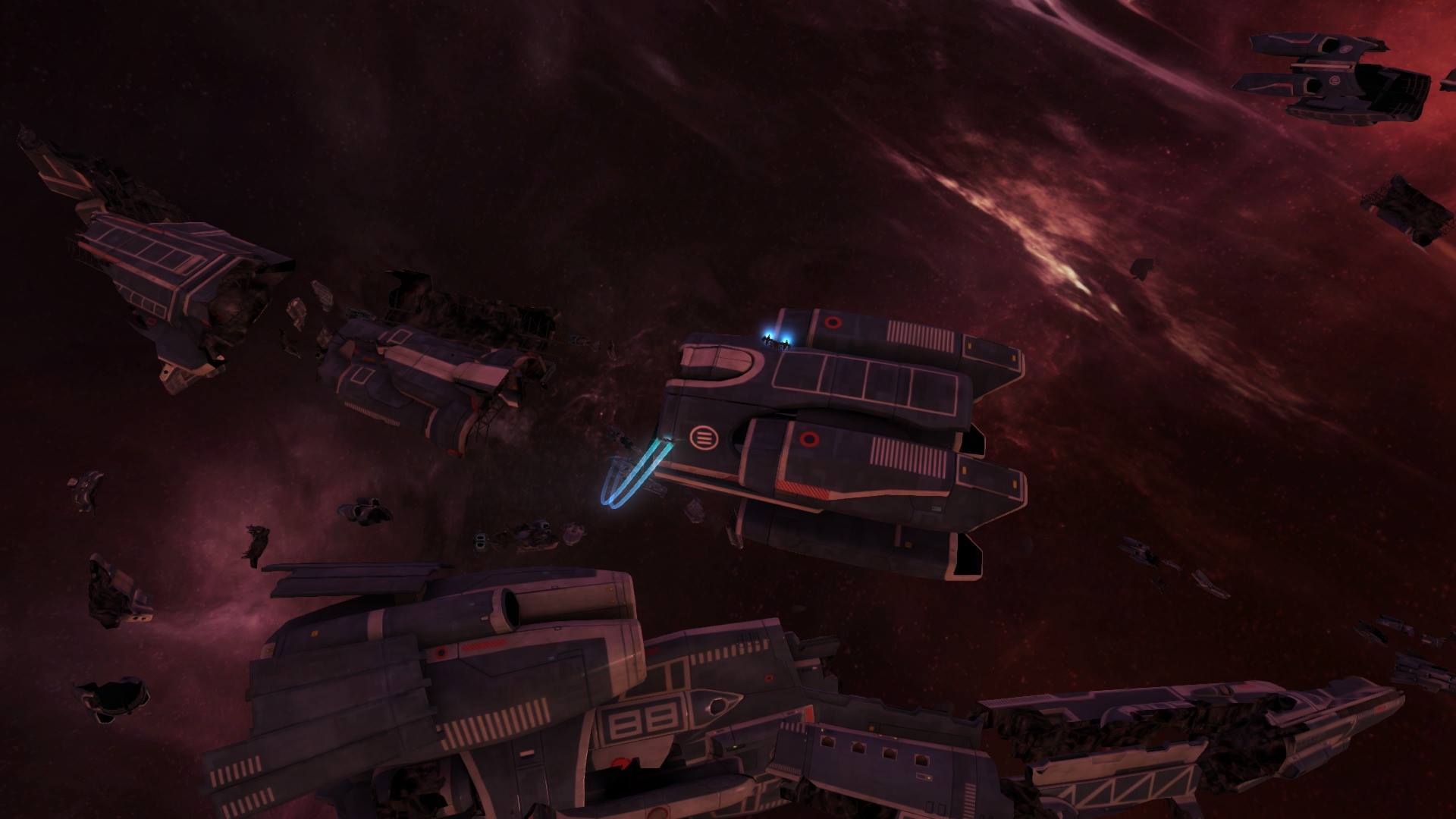 With a handful of control schemes to choose from, the first few moments of 'Strike Suit Zero' introduce the mechanics of controlling your ship. Getting accustomed to the pitch and yaw of your ship, while speeding through a debris field, is nicely balanced with a tutorial of the powerful weapons that come with it. I'll admit, my familiarity with space shooters is probably on the low end, but the controls were easy enough for me to muddle my way through during the opening moments with minimal difficulty. Getting up to speed quickly is a necessity as the game spends very little time babysitting before dropping you headfirst into your first outer space dogfight.

Soon after completing your first mission, you are introduced to and take control of the game's namesake – the Strike Suit. With a hint of Lightbox Interactive's 'Starhawk' and a dash of 'Transformers', your Strike Suit is capable of taking on the shape of a floating Mech, ready to unleash a much more powerful arsenal. While the transformation is fast and seamless, this bulkier version leaves you more open to attack, with less opportunity to evade. However, it quickly becomes evident that without the Strike Suit's more powerful weaponry, later missions become nearly impossible. 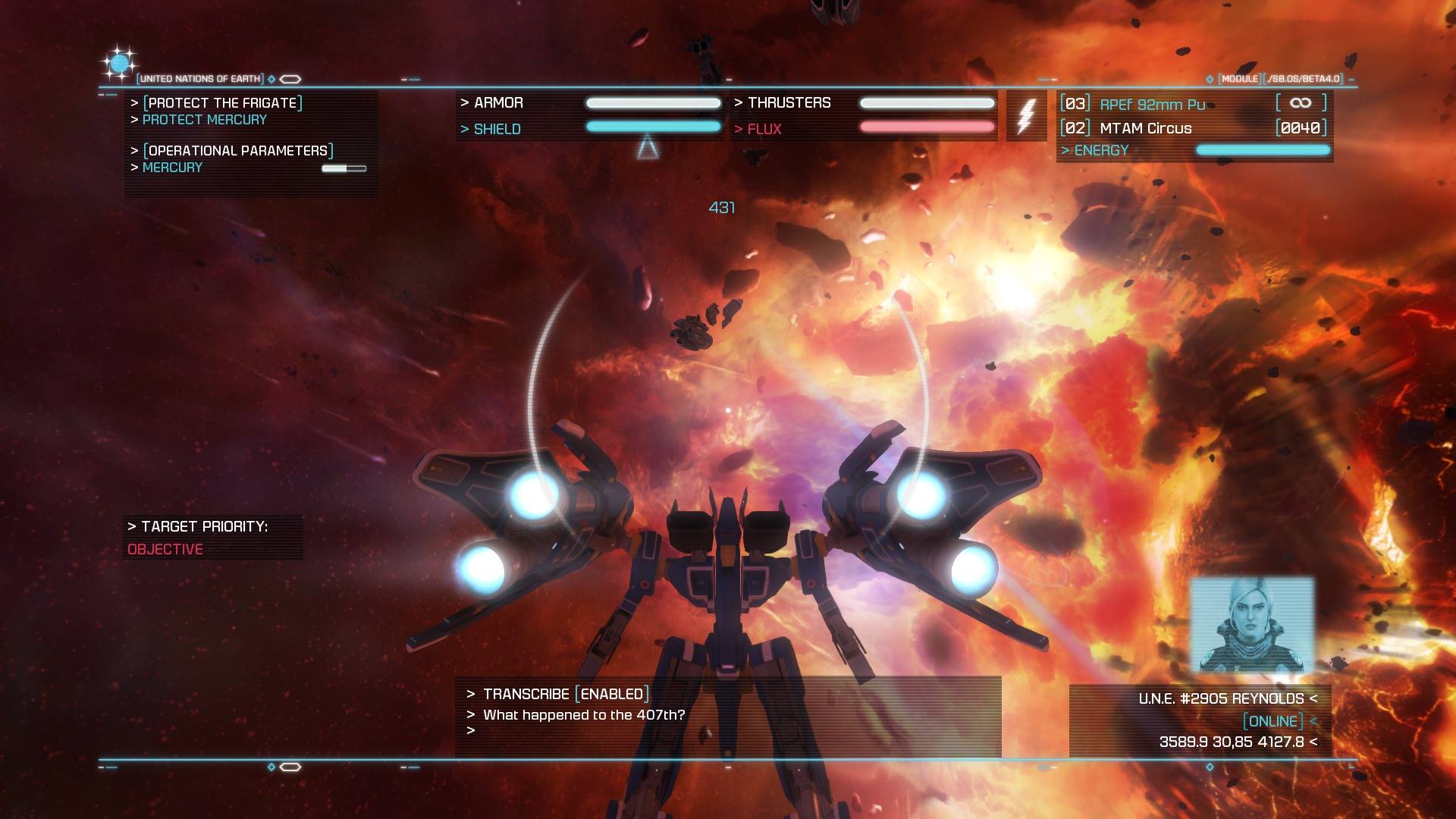 Whether from a first-person or third-person view, anticipating the enemies' movement and being able to stay with them as they zigzag across the stars is, initially, an exhilarating experience. It's fast paced and tense, and reminds me of the numerous dogfighting scenes from the SyFy Channel's incredibly successful reimagining of 'Battlestar Galactica'. 'Strike Suit Zero' does a fantastic job of making the player feel like a seasoned veteran of space combat; until you realize midway through the game that a lack in gameplay variety interrupts an otherwise enjoyable experience.

While one-on-one dogfighting is something that I could do all day long with a smile on my face, the oft-repeated escort missions ultimately turn that smile upside down. Ramping up the difficulty, 'Strike Suite Zero' adds significantly larger cruisers, hell-bent on destroying the vessels you've been assigned to protect. It's here that I feel the developers at Born Ready Games missed a perfect opportunity to add in a co-operative mode to the game. Although Andrews has ample support with each mission, it often feels like the weight of the entire war is on your shoulders. Bringing a friend along for the ride to coordinate your attack could have propelled 'Strike Suit Zero' to an entirely new level of space combat. 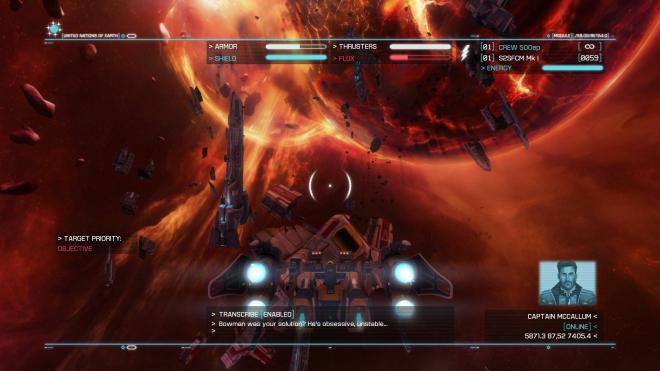 For me, the clear standout feature of 'Strike Suit Zero: Director's Cut' is with the art direction. This is one of the most beautiful games available on current gen platforms. The backdrops of nebulas or planets are mesmerizing. Honestly, some of the images you will experience could be framed, matted, and hung over your fireplace (if you're into space art hanging on your walls). 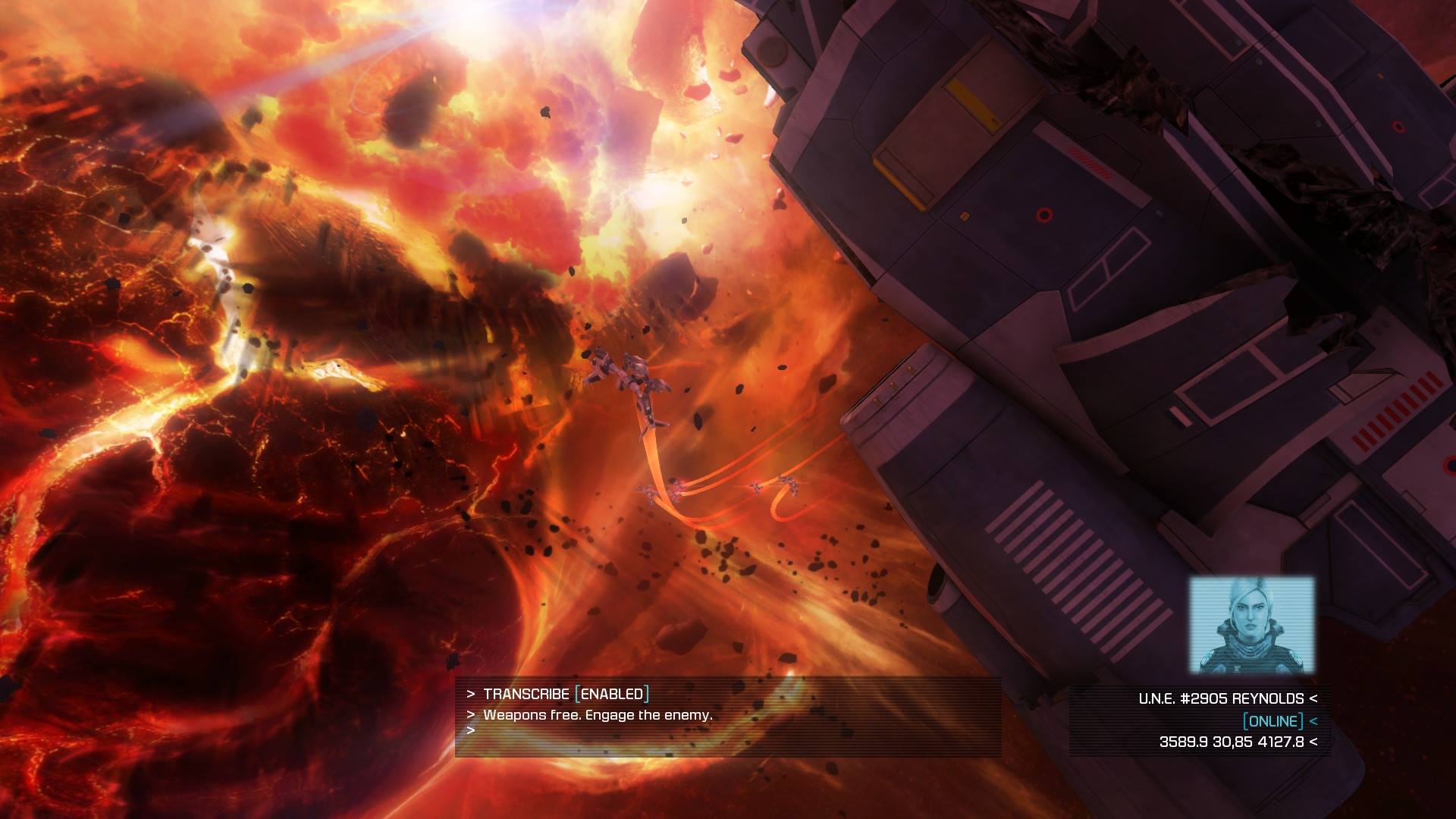 Unfortunately, the beauty of 'Strike Suit Zero' is somewhat of a double-edged sword. While new missions generally provide new vistas to be in awe of, breathing in their beauty is short lived. Moments after starting a new mission you are unfailing going to be attacked from all directions. Although the backdrop remains mostly in place, frantically dodging laser fire and locking on targets blurs out the art you were previously incapable of looking away from.

With dozens of ships engaged in combat, I was impressed that the frame-rate never took a hit. I was certain this level of on-screen chaos would have yielded some less-than-desirable visuals. Kudos to Born Ready Games for delivering a game that is both visually impressive and incredibly stable to play. 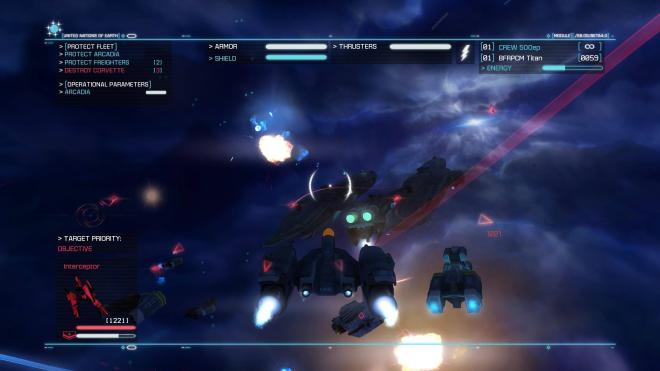 Experiencing 'Strike Suit Zero' in 7.1 audio surround sound was very much hit or miss. On the one hand, the frantic nature was ratcheted up based on the high level of on-screen combat. As it should be, it was difficult to pinpoint your targets based solely on directional sound. On the other hand, the dialogue your allies delivered - either pertinent to the mission at hand or to further develop the story – was often shared during combat. The result was often a jumbled mess. Add to this an inconsistent use of the DualShock 4's built-in speaker and I found myself missing the majority of what was said.

Further reminiscent of 'Battlestar Galactica', the soundtrack during both serene moments and frantic combat helped to create feelings of tranquility and desperation. Unfortunately, the soundtrack editing wasn't always applicable to specific moments of the game and was often intermixed, resulting in a confused sense of drama and action.

Although gameplay variety is relatively low, 'Strike Suit Zero: Director's Cut' does encourage replay value. In addition to the online leaderboards that evaluate based on individual mission success values, the option to level up your current ship of choice or unlock new ships to control is reason enough to suit up for another go at space combat.

'Heroes of the Fleet' mode also provides an opportunity to replay a variety of combat simulations that represent some of the more 'heroic' moments of the campaign. Additional simulations are unlocked as you progress, ramping up the difficulty and testing your skills as a pilot. 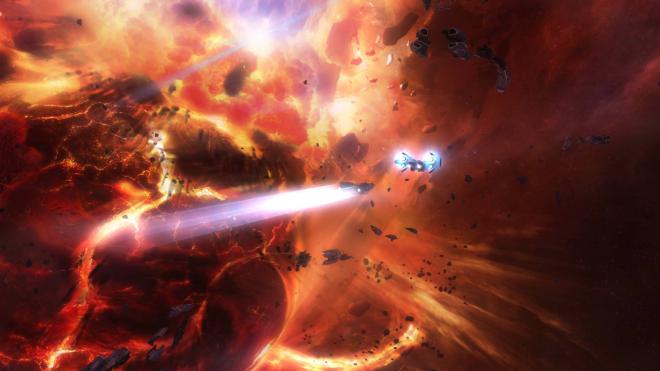 From the PlayStation 4 home screen, the 'Strike Suit Zero: Director's Cut' icon provides access to the concept art from the game. When selected, you are taken to the 'Strike Suit Zero' web page to shuffle through and enjoy these inspiring creations. As I mentioned above, the attention to detail that went into the visuals of 'Strike Suit Zero' makes it worth the low effort needed to view them as stand alone pieces of art. 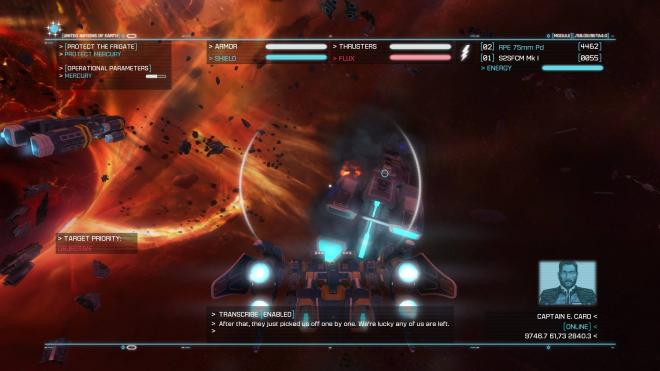 Space shooters like 'Strike Suit Zero' fit a specific niche genre. They can be tedious and simulation-like, or a straight up arcade action experience. 'Strike Suit Zero: Director's Cut' fits nicely somewhere in the middle. The controls translate well from PC to console and are generally approachable very early on in the game. While I have never experienced the original version of the game, it does seem apparent that the developers at Born Ready Games put a significant amount of effort into the port. The visuals are simply stunning, but the repetitive nature of the gameplay as a whole has a tendency to dilute the overall experience. Given the option to replay 'Strike Suit Zero' with some form of co-op or multiplayer may certainly change my opinion and make the game a must-play. In its current, revised form, the game is diverting to play and better to look upon, but stops short of full engagement.