Digital Vita version reviewed. This review limits spoilers to the Prologue section of the game; however, some plot points from preceding game, 'Danganronpa: Trigger Happy Havoc' are touched on.

Early in 2014, Vita fans were treated to the unusual game called 'Danganronpa: Trigger Happy Havok.' 'Danganronpa' (check out that review here) took a healthy dose of text heavy visual novel elements, and a smattering of frantic gameplay to engage players in its bizarre plot. Spike Chunsoft's sequel 'Danganronpa 2: Goodbye Despair' hopes to draw fans of the original title in again, with a new setting and new characters to explore and learn about. This is a series that has taken its time in coming west, but not that's here, is it enough to promise a unique experience?

In 'Danganronpa 2: Goodbye Despair', you play as one Hajime Hinata, a boy that is excited to begin his life at the prestigious Hope's Peak Academy, a school where the Ultimates of various fields are gathered to become the future of the world. However, things immediately go astray as he blacks out and eventually makes his way to an unusual door. As it turns out, Hajime and fifteen other students have been taken to a remote tropical island by Usami, a rabbit-like creature that asserts itself as the students' teacher. USami explains that the students are on a field trip to foster trust and hope amongst one another… of course, once Monokuma appears, the tropical trip turns from one of hope to one of despair, where the students have to kill one another in order to escape their island prison and return home. 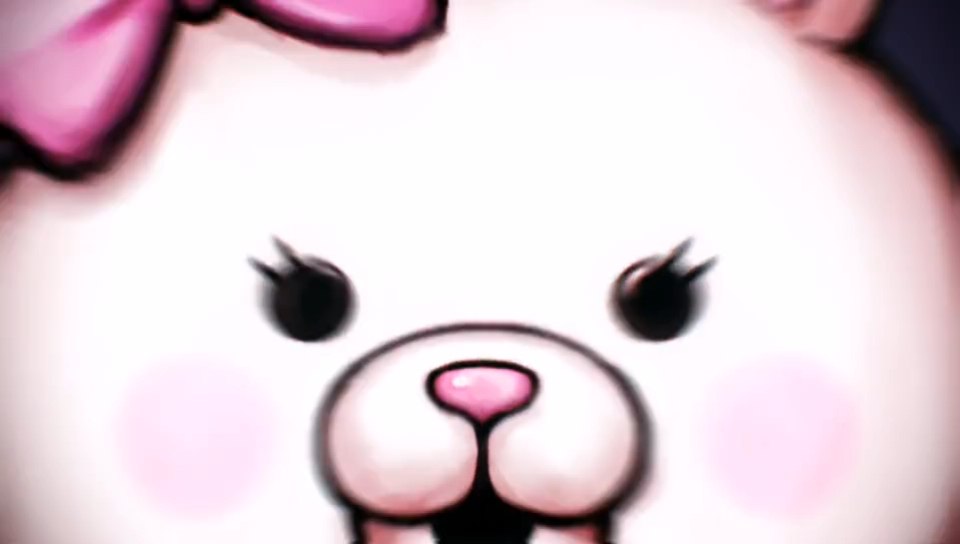 'Goodbye Despair' is split into three distinct sections that reoccur in an almost regular sequence. During the Daily Life phase, life on the island is more or less peaceful. During this time you'll be able to explore the islands that make up the students' temporary home freely, as well as spend your Free Time talking with the various other Ultimates on the island. Hanging out with other students will have you learn more about them, as well as obtain Hope Fragments that you can use to obtain skills, which are used in another portion of the game.

Free Time is probably one of the more interesting parts of 'Goodbye Despair', as you come to learn that many of the students on the island are deeper than they initially seem. While a cursory look makes it seem apparent that these characters are all examples of various stereotypical tropes, spending time with them tends to reveal quite the opposite, and it's rewarding on both a gameplay and plot level to spend the time to interact with them.

Eventually, Daily Life will give away to Deadly Life, once a student is unfortunately murdered. During Deadly Life, you have to investigate the crime scene and other areas of the island, trying to unravel the mystery and identify the murderer. These parts are relatively straightforward, as they only involve pointing out areas of interest and talking to the other students about the case at hand. The evidence you obtain will become Truth Bullets, the ammo needed to succeed at the final phase of each sequence of the game, the Class Trial. 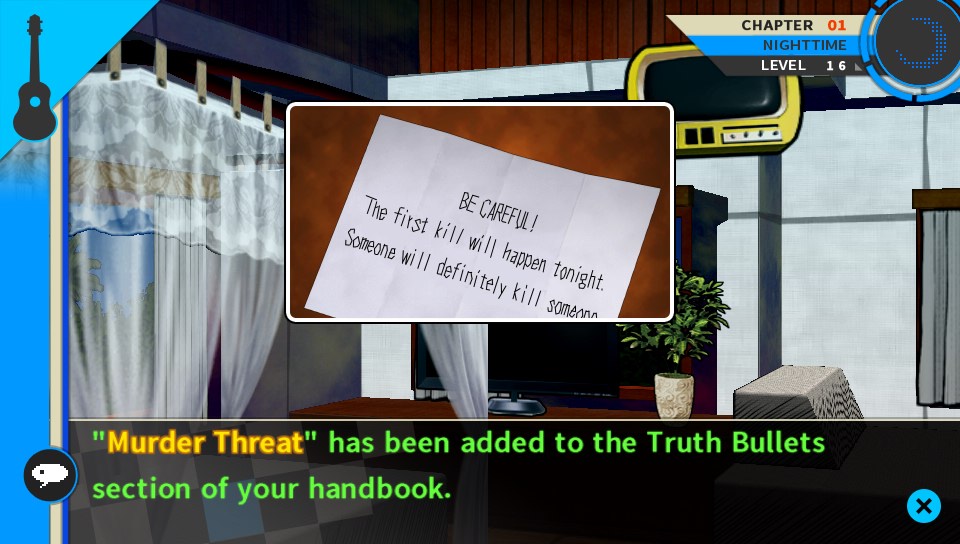 In the Class Trial, you have to use the evidence/truth bullets you've gathered, the skills you've bought with Hope Fragments, and your head in order to find the killer. If you don't, everyone but the murderer will be punished (killed), and the killer alone will be able to graduate and leave the island. If the students successfully deduce the killer, only the killer will be punished, and the others can continue living their life on the island.

Class Trials are the most gameplay-packed sections of 'Goodbye Despair', as it mostly sheds its visual novel trappings for more action oriented sequences. While there is still plenty of text during the Trials, you also engage in a number of mini-games as Hajime works towards each murder's truth. For example, you can shoot through others arguments or agree to them with a well-aimed Truth Bullet, or line letters up to spell an important clue to the case. In a new mini-game called Logic Dive, you can even control Hajime in a psychedelic environment as he hurdles through questions to lead to a new line of reasoning.

For those that have already played 'Trigger Happy Havoc' (which is recommended for plot reasons), 'Goodbye Despair' will not bring too much new to the table in terms of gameplay mechanics. However, what was there was already is quite good, and it feels as though small tweaks have overall made the sequel a tighter package. It's a lot easier to move around the island in 'Goodbye Despair' than it was the school in the original title, and the narrative feels a bit more focused, trimming some of the excess that was prone to 'Trigger Happy Havoc.' 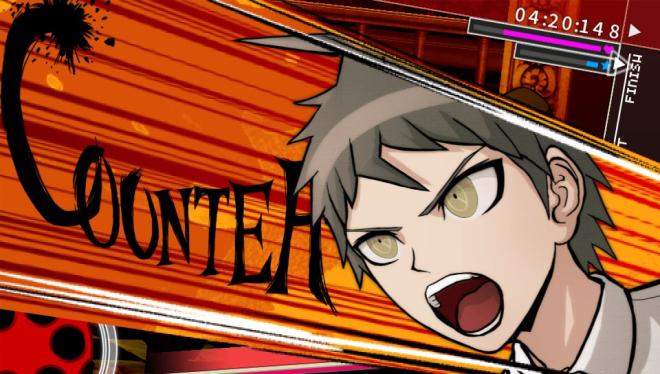 Much like 'Trigger Happy Havoc', 'Danganraonpa 2: Goodbye Despair' was originally a PSP title that was ported and touched up for the Vita. As such, the graphics don't particularly push the system's limits. However, that doesn't stop this title from having a unique visual flair that helps it stand out a bit despite the title's originating graphical limitations..

Given 'Goodbye Despair's' setting, it allows for a colorful palatte that makes for some nice looking locations. Everything from the areas to the characters has a dioramic presentation, with 2d characters and objects population simple 3d environments and lending a unique touch to an otherwise low-end graphical job. The UI and menus in particular have a very striking design to them, which look very good and feel like they fit well with the game world. So while 'Goodbye Despair' may not have cutting edge graphics, they are by no means ugly, and the mix of bright colors and styles keep it all from getting drab and dull. 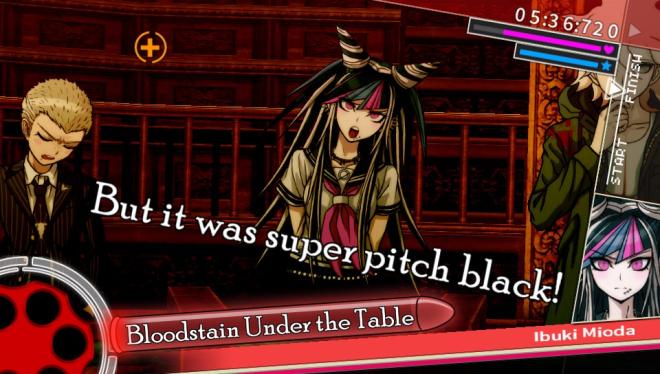 One of weakest areas in 'Goodbye Despair' may be in the title's audio department. The voice acting for the most part is solid, and the option to use either English or Japanese tracks is a nice addition, but the problem is that there isn't much of it. Besides the Class Trials and a few select lines, each of the character's audio tracks are limited to a variety of 'canned' responses that will play when they speak. This isn't particularly bad, but it can be a bit disappointing that there aren't more fully spoken lines.

Also, the soundtrack mostly holds itself up well, but that is also because a good deal of the tracks are from the original title. Then again, it's hard to fault Spike Chunsoft, because many of 'Trigger Happy Havoc's' tracks still fit the despair-laden atmosphere in 'Goodbye Despair', but when you hear some of the great new tracks, it can be a bit of a downer to realize that the sound team could have remixed the older tracks into something even better.

Since 'Goodbye Despair' sets out to tell you a linear story with a single ending, it's a bit hard to replay through the main story again. There is the task of collecting all of the presents and Monokuma dolls hidden around the island, but these are hardly a reason to return to the game once you've beaten it shy of Trophy hunting.

But, after you beat the main story, two new modes open up, allowing you to delve farther into certain aspects of the 'Danganronpa' series. It's difficult to talk about them without spoiling what's interesting about them, but they are certainly worth a playthrough of their own! 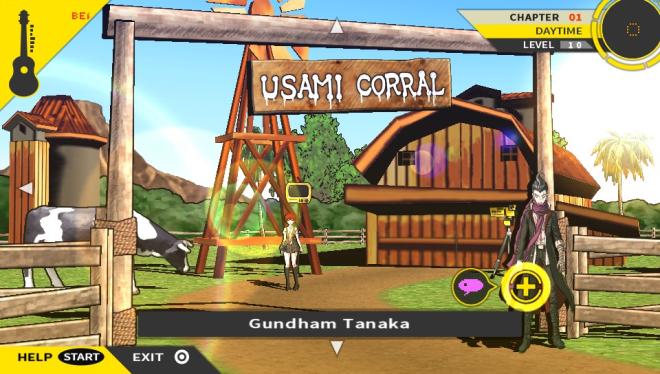 While this is the first time we've experienced 'Danganronpa 2', the fact that it's a touched up port of a PSP game means several small upgrades that could be considered bonuses. Certain touch controls have been added, which will let you shoot or cut down arguments by touching them instead having to aim the reticule with the analog stick. Loading times are insignificant and the retouched visuals help the presentation of the characters and the class trials while maintaining the original art design. 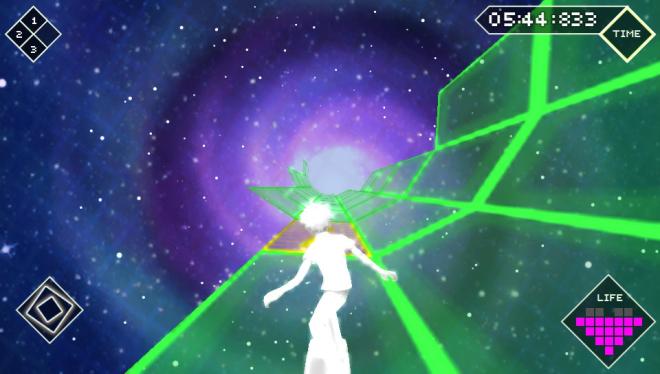 If you enjoyed 'Trigger Happy Havoc', then you owe it to yourself to grab 'Goodbye Despair'. Gameplay-wise it is almost the same game, but the characters this time around are deeper and feel more interesting… and of course, the plot will go through some crazy twists and turns that you won't want to miss. The series macabre content, while touching on elements of different games and anime, makes for a package not regular found on western gaming systems. Though a sequel in most every way, the uninitiated could still tackle 'Danganronpa 2' without being hopelessly lot. On the whole, 'Danganronpa 2: Goodbye Despair' offers an improved package of the original game, making it more rewarding to play through and experience what the crazy series has to offer.