Pre-release digital PS4 version reviewed.  Digital version retails for $19.99, while the hard copy is $39.99 and includes the Season Pass. Online Multiplayer not reviewed.

Have videogames gotten too easy for you? Does the thought of regenerating health make you cringe? Do you yearn for the glory days of videogame difficulty? If a challenge is what you seek, then look no further than 'Trials Fusion.' Developer RedLynx has been honing their motor cross racing mechanics for more than a decade. Starting their development efforts on the PC, then eventually transitioning later titles of the 'Trials' franchise onto the home console market. Their latest iteration, 'Trials Fusion', is the first title to include the PlayStation platform, and the first 'Trials' of the new console generation. The PS4 version boasts of HD visuals, multiplayer, a track editor in addition to the core gameplay tenets of the prior 'Trials Evolution' and 'Trials HD,' but a new platform means new development challenges. And so, without ado, it's time to dive right into 'Trials Fusion.'

I have to hand it to RedLynx. The first PlayStation installment of 'Trials' was worth the wait and seeing it in action on the PlayStation 4 is proof that their years of experience and polish has culminated in an experience that is challenging, responsive, and heavily focused on engaging aspects of social interaction.

For those new to the 'Trials' franchise, or unfamiliar with physics-based games in general, prepare yourself for an experience designed to challenge and delight. While the controls of 'Trials Fusion' are quite easy to grasp. Triggers control forward and reverse acceleration respectively, analog sticks control body and motorcycle angle, but it's mastering their delicate response that will ultimately develop you into a motor cross superstar. 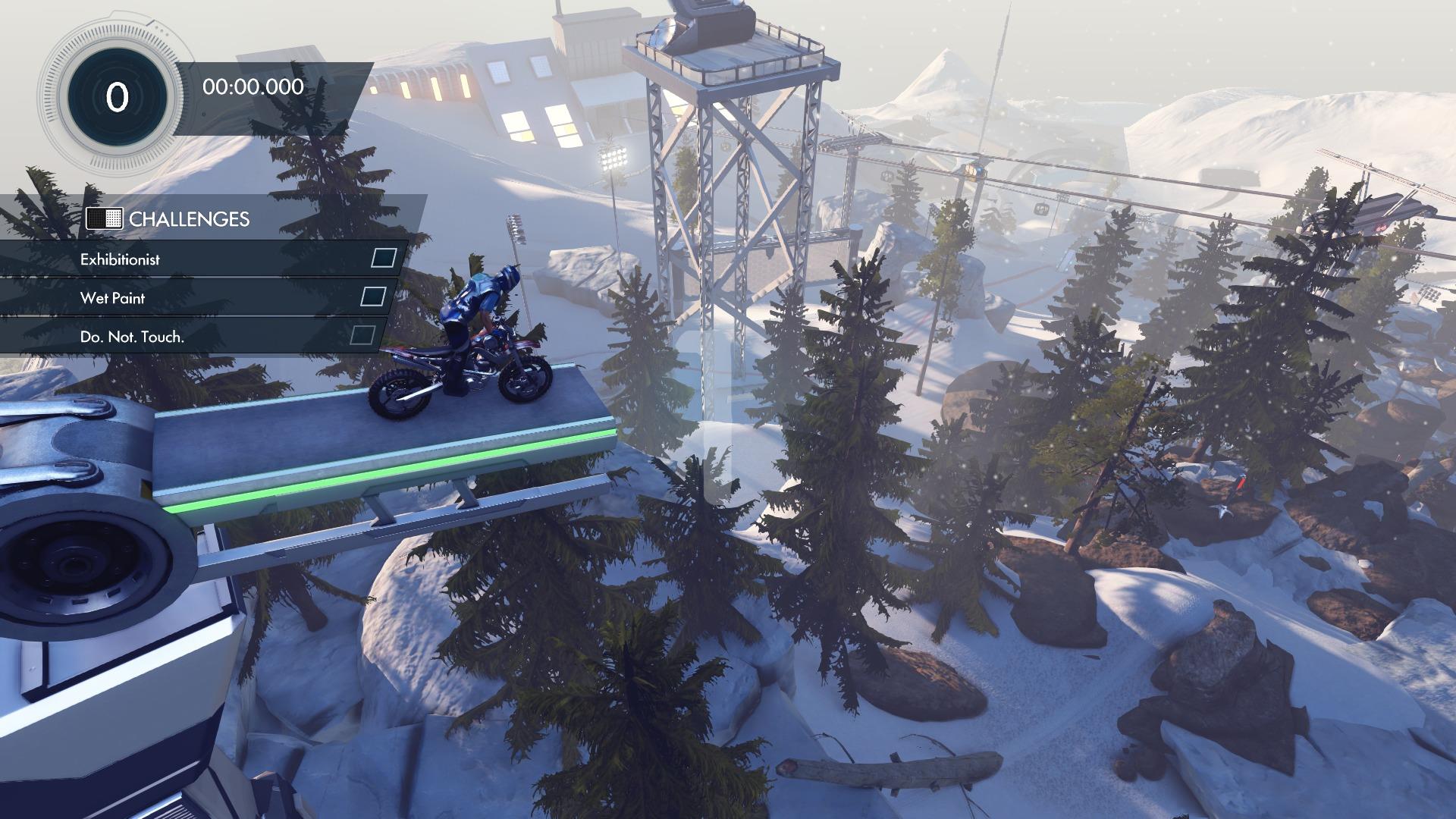 Then again, understanding the control scheme of 'Trials Fusion' is only the first step in successfully navigating through some of the more insane, and often mobile, track designs. From a third-person point of view, the camera is nicely placed from a side angle and pulled far enough back from the racer that you are always able to see just ahead to anticipate dramatic course alterations.

For old and new players, focusing efforts on the available career mode will scale the difficulty in a way that avoids frustration too early in the game, while still providing ample tutorials to further refine motor cross abilities. While there are plenty of races available in career mode, unlocking them all is determined by your progression and the number of medals obtained. While this is a fairly common racing game trope, it's still one that I argue against. I would much prefer to have the option to experience every track available, rather than grind through and replay earlier tracks just to obtain additional medals. 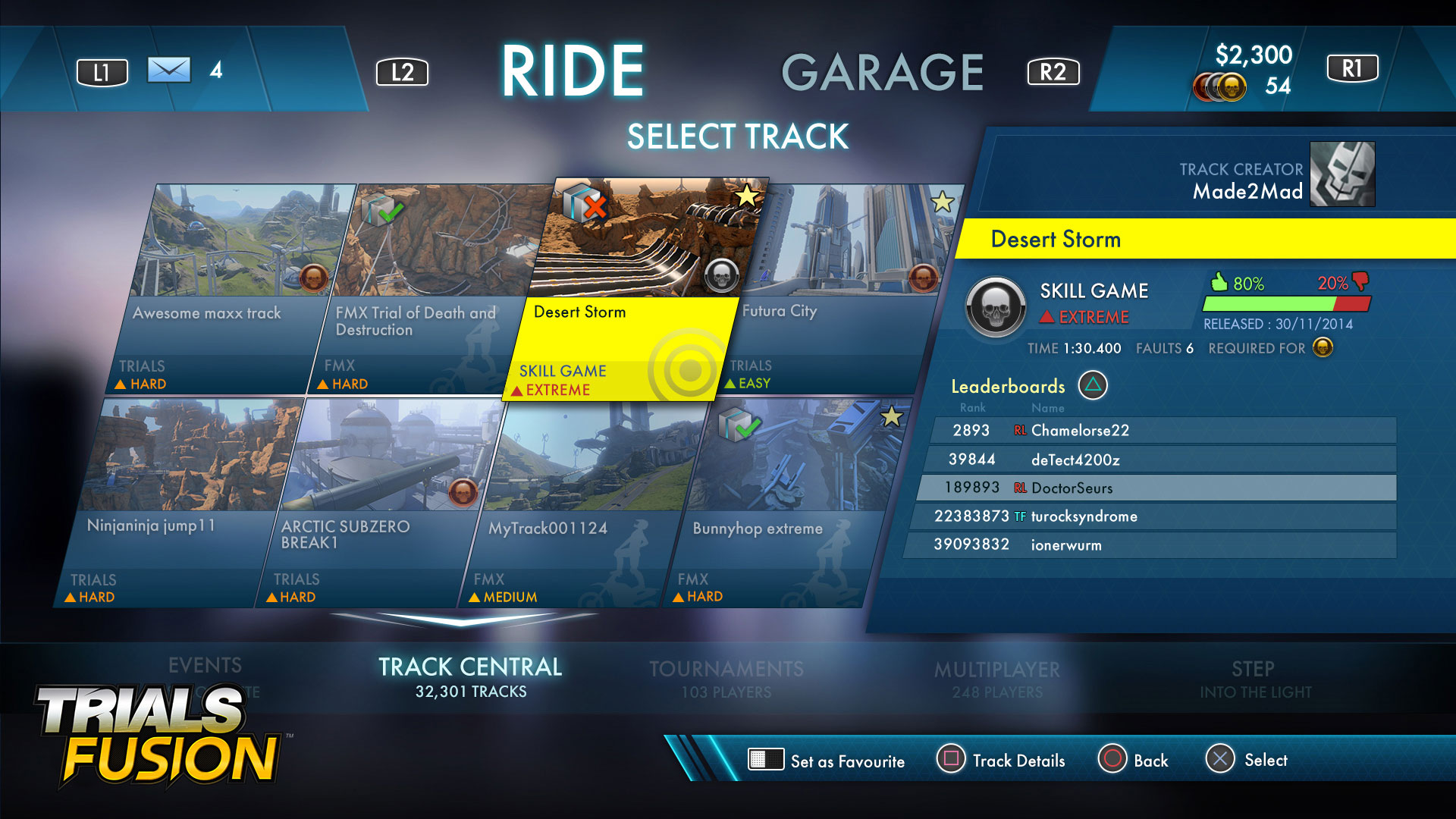 Still, practice most certainly does make perfect, and if you have any hope of being a competent multiplayer contestant, you'll need all the practice you can get. As my review is based on an advance PlayStation 4 code of 'Trials Fusion', the online multiplayer was not yet made available. (Online Multiplayer is not schedueld for the game's release, and is due at later date.)  However, my teenage son and I were able to spend a good amount of time with the local multiplayer, and if the online version is anywhere near as good, I know where I'll be spending much of my time in the once it's available.

First off, I was extremely pleased to see that the local multiplayer was developed without the need for split-screen. Instead, the camera, taken from the same angle as the career mode, is further pulled back to allow a greater view of the playable racers and more of the track. The multiple checkpoints are used to restart the player that has fallen behind (and fallen off-screen) or crashed. When the lead racer reaches that checkpoint, the other racers have an opportunity to restart their progress. The number of crashes for each player are recorded and totaled at the end of each race, providing and effective final score. Setting up the multiplayer was also done exceptionally well. You begin by selecting the style of race – wilderness, city, mobile tracks, etc. After determining the number of heats and how often they repeat, individual tracks from the race category previously selected can then be selected and added. The start of each heat provides a few seconds to select from the available motorcycles, quad-bikes, or pedal bicycles, and the race begins. The transition from one heat to the next is quick, seamless, and effortless, and is one of the best multiplayer racing experiences I've had in a long time. I remain hopeful that the online component will work just as well.

Performing in-air showmanship through the FMX Trick system will continue to ramp up your racing prowess. After launching from incredibly high jumps – of which there are many – players can show off their skills through a high number of crazy stunts as they float through the sky. Want to embrace your inner Superman? Kick your bike out from under you and grab on to the seat from behind. Looking to pose for the camera as any real hero should? Stand on the bike's seat and push out your chest. An FMX training simulator, utilizing a wind turbine to raise you and your bike several feat off the ground, instructs you in the ways of the FMX Trick system. Controlling the movement of the bike and the ragdoll rider with the left and right analog sticks sounds easy enough, but I found successfully completing these tricks to be difficult at best. As a result, my racing abilities remain focused on simply finishing in one piece. 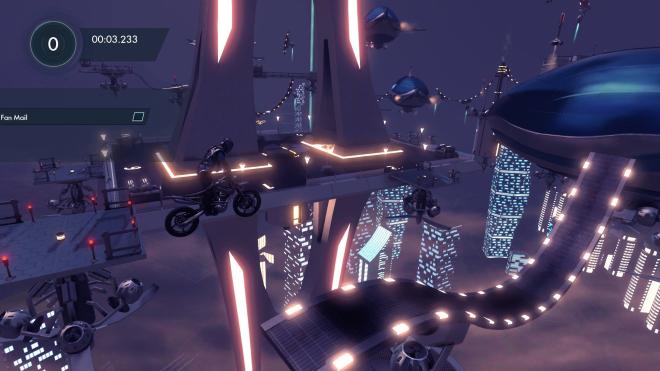 Previous iterations of the 'Trials' franchise have always had the edge when it comes to the visuals. 'Trials Fusion' is no different. Taking full advantage of the PlayStation 4's technical advancements, the developers at RedLynx have created a racer that embraces all of the visual beauty one has come to expect from the team. Dust particles are kicked up as you run through a wooded landscape. Water splashes as you puddle-jump your way to victory. And birds will even fly through your path as you sore through the air. Dynamic weather effects keep things varied through flares, nighttime light reflections, and a dense fog, which are all always pleasing to the eye. However, it's the industrial explosions and moving platforms that alter the track's path that, for me, were the real highlights of 'Trials Fusion.'

As stunning as the game is, I was surprised to see a moderate level of texture popping while playing both the career and local multiplayer modes. It never detracted from the overall experience, but neither was it insignificant. A day one patch is promised to further optimize the already blazing framerate. 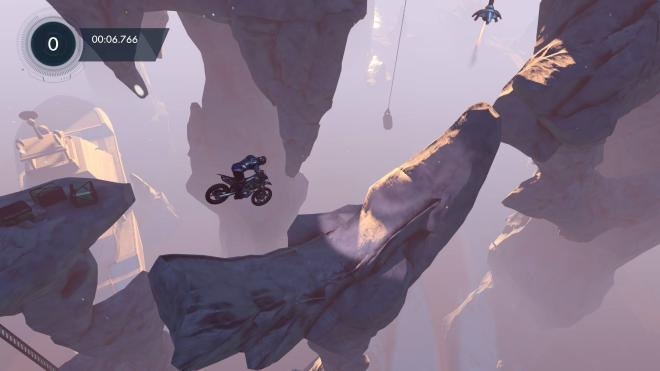 Although 'Trials Fusion' takes full advantage of a 7.1 audio codec, it does so from more of a soundtrack perspective. Utilizing an in-your-face techno-rock sound, albeit a rather corny one, each of my surround speakers were nicely balanced and pumping out music that helped to elevate the extreme nature of the racing game. While the special sound effects of the revving motor and squealing tires were reserved more for my front and center channels, I honestly was not expecting much more in the way of surround sound.

Commentary that is added during and after many of the individual races takes on a comedic tone reminiscent of Wheatley and Cave Johnson from 'Portal 2.' They are witty and jokingly state the obvious. It's worth staying through to the end of each of the races' brutal conclusion just to hear the next announcement.

Simply focusing on perfecting every track during career mode is enough to provide a high replay value for 'Trials Fusion.' Add in local and (eventual) online multiplayer, ghost racing to best your friends' scores, leader boards, and global competitions, and you've got a near perfect recipe for addiction. But the developers at RedLynx didn't stop there. Instead, they brought back and refined the track editor. 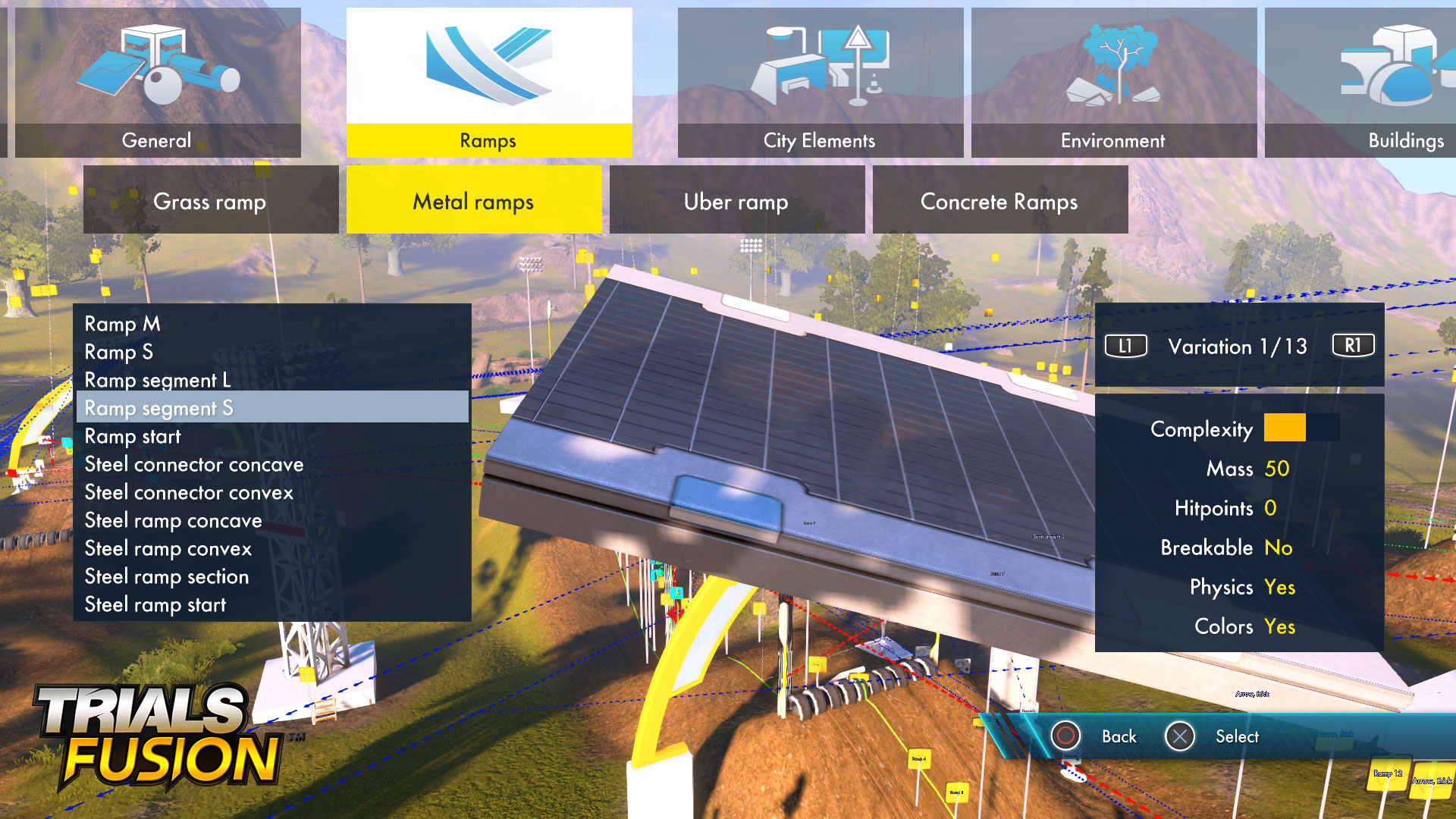 With a high number of track editor choices, the right mentality and creative vision could really put them to use. One could spend hours conceptualizing and developing an original track that might even make the game's designers jealous. This isn't a likely pursuit for everyone or even most, but being able to upload and share tracks with your friends and the rest of the world is what makes this feature so appealing. It's unlikely I would ever be able to develop an original track beyond rudimentary effectiveness, but it's safe to say that I'll be downloading a great many tracks fans of the game have to offer. 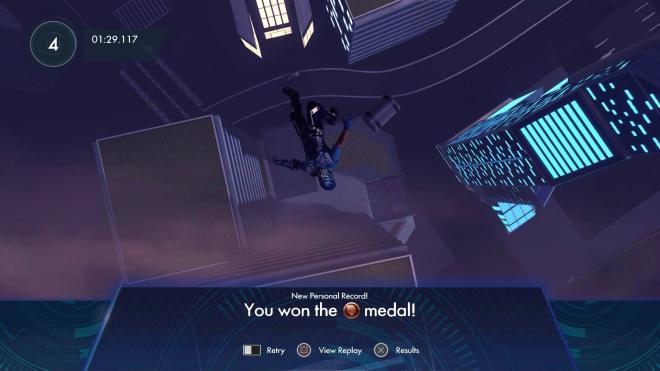 'Trials Fusion' falls into that game category of not needing to fix that which is not broken. RedLynx has taken an already solid concept from years of development efforts and refined and polished it to a high gloss. While I was not able to experiment with any of the online multiplayer, past and present 'Trials' experiences make me fairly confident that when the mode is released and goes live, it's certain to run in a respectably smooth manner. In the meantime, I look forward to furthering my career in preparation for the online chaos that is sure to occur. With 'Trials Fusion,' PlayStation only gamers have reason to celebrate, and a reason to get to know and love the latest 'Trials.'