Housemarque continues to be a go-to developer for PlayStation. After helping to kick off the launch of the PlayStation 4 with the incredibly addictive and challenging 'Resogun', they're back at it with a focus on porting over their ever-popular PlayStation 3 title – 'Dead Nation'. Having received generally favorable reviews from both critics and gamers alike back in 2010, 'Dead Nation' comes to the PlayStation 4 in the form of a 'definitive edition' – with a few added bells and whistles, and the move seems like a no-brainer (pun intended). But for those who have never experienced the game before, does it set itself apart from what seems like an endless stream of zombie apocalypse titles?

A lot can happen in a year, and when the zombie apocalypse is in full swing, the bad generally outweighs the good. After a brief opening sequence – reminiscent of Zack Snyder's 2004 'Dawn of the Dead' remake – players are given the opportunity to select one of humanity's last survivors to play as – Jack McReady or Scarlett Blake, solo or in co-op. Mysteriously immune from the plague that has devastated the world over, your food supply has run out and the last barricade has fallen – the time has come to head out into the nightmare world in search of safety and other survivors. 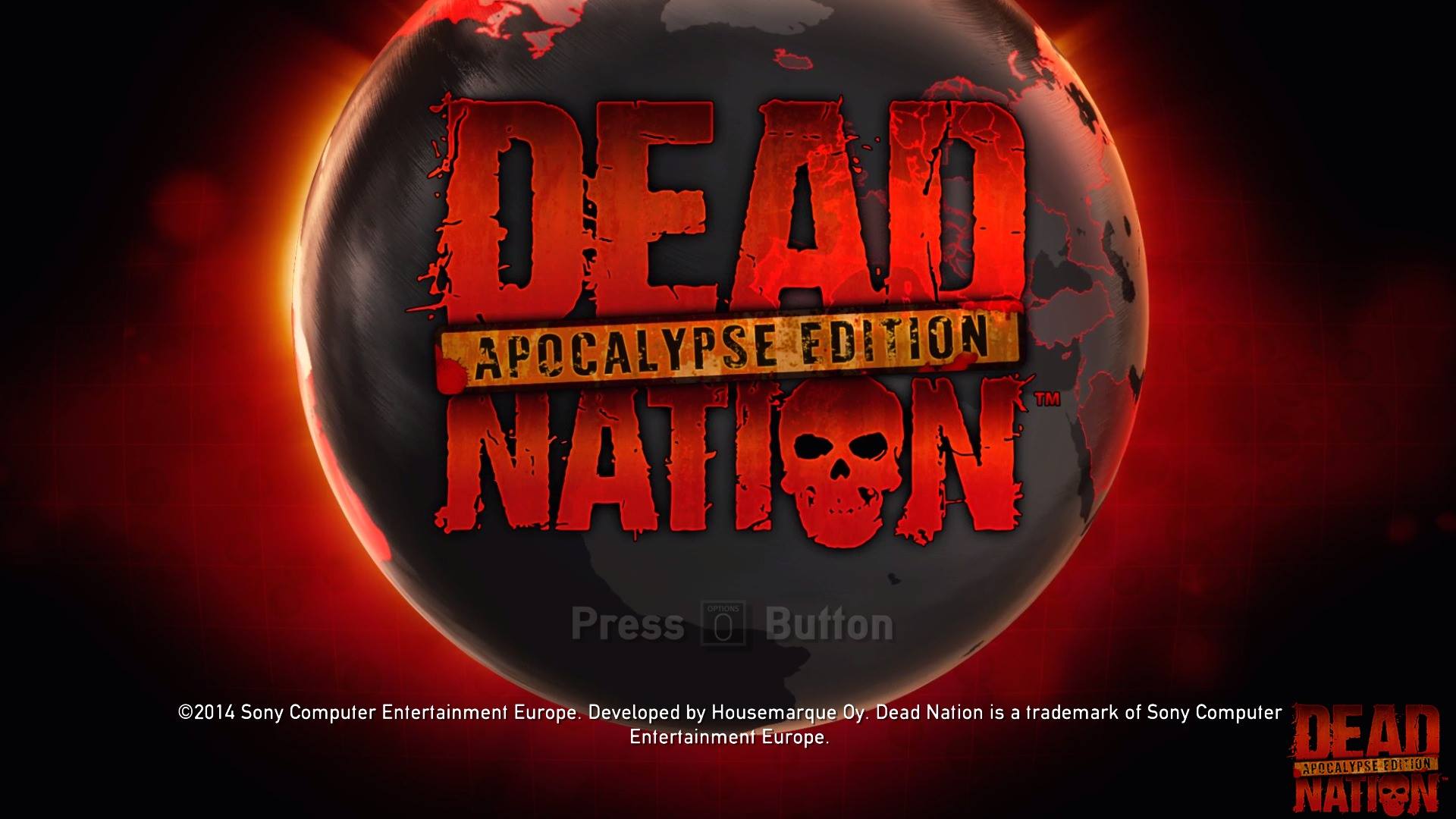 Doing what developer Housemarque does best, 'Dead Nation' incorporates the familiar and highly capable twin-stick game mechanic of moving your character and aiming your weapon, while utilizing an effective bird's eye view of the playing field. The game is divided into chapters, each of which are further divided into multiple safe zones that, when reached, allow for an opportunity to change your armor, equip and upgrade new and devastating weapons, and take a much needed breather from the chaos that still awaits. And the chaos that is thrown at you only increases with each passing moment. 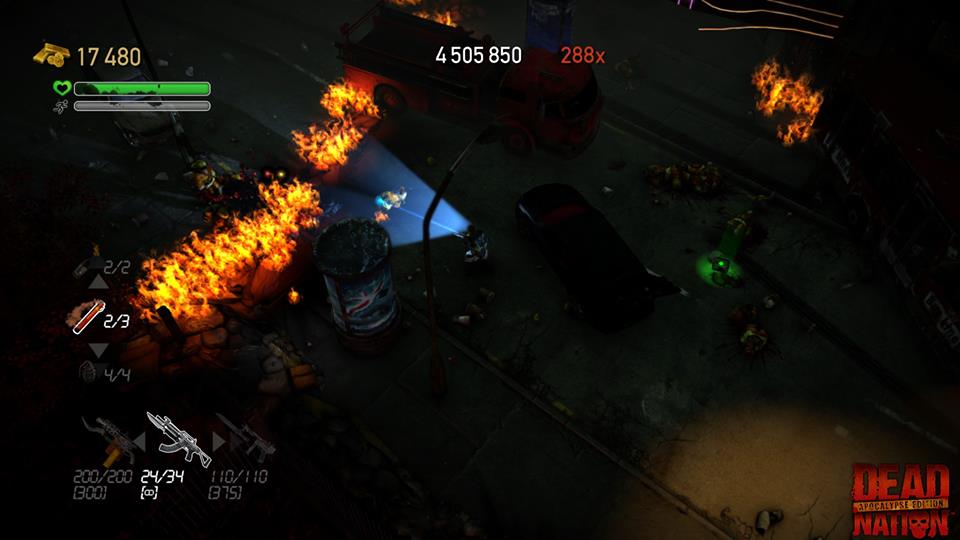 Your objectives are clear, and you have but a single priority – stay alive. However, simply fending off waves of the infected will not be enough to survive 'Dead Nation.' Every zombie kill increases your multiplier which, in turn, rewards you with significant cash and points to spend on upgrades. The streets also provide ample cars and crates that are filled with additional money, resources, health packs, and armor equipment; and you'll be tempted to search each and every one of them. But taking too much time will ultimately affect your end score when tracked against both global and local leaderboards. It's an interesting dichotomy: play it slow and safe, or fast and loose?

Regardless of your play style, and whether or not score chasing is your thing, this updated version of the PlayStation 3 downloadable title from 2010 brings with it a few changes worthy of note. Having the ability to assign any variety of weapons and inventory to the four face buttons on the Dualshock 4 is a simple, yet welcome improvement over relying solely on the directional pad. It makes changing weapons fast and seamless when in a desperate situation (i.e. the entire game). 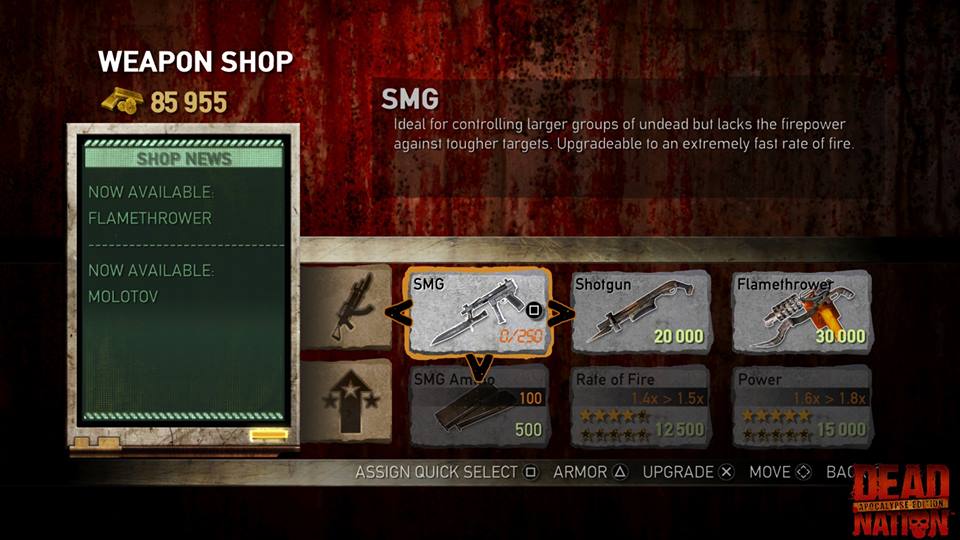 It's no secret that Sony continues to push the social media aspect of the PlayStation 4 and, as a result, Housemarque has included their version of TwitchTV interaction. While broadcasting your play session of 'Dead Nation: Apocalypse Edition' good and bad options are displayed for the Twitch viewers to vote on every few minutes. Anything from increasing or decreasing the difficulty (on an already difficult game), removing the character's rush ability (basically a quick dash) spawning zombie attacks, etc. When complete, those viewers that took pleasure in making your life increasingly more difficult will appear as in-game zombies named with the applicable PSN ID, allowing you to extract your own form of bloody vengeance. 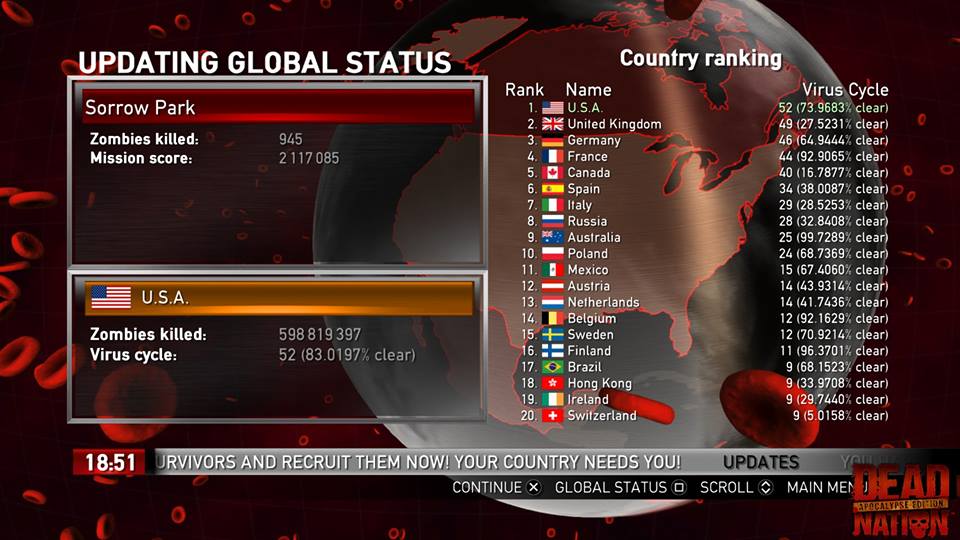 When it first arrived for the PlayStation 3, the visuals of 'Dead Nation' were undeniably impressive. Somehow, the 'Apocalypse Edition' has found a way to make them look even better. The smoke and fog, where previously thick, are even more menacing, making it difficult for your flashlight-mounted rifle to penetrate and reveal hidden terrors. Add to this an increased lighting effect - particularly when there is a flash of lighting – the individual drops of rain on the wet pavement, and chunks of gore from the horde that just ran over your strategically placed landmine, and you'll realize just how well 'Dead Nation' performs at a solid 30 fps in full 1080p.

The attention to detail, especially with the variety of zombies, continues to amaze. The area you are attempting to navigate will generally dictate the uniquely attired zombie that hungers for your flesh. Stumbling across an abandoned school bus may yield a swarm of high school football players still in uniform and helmets. Walking past a destroyed police station will result in an attack by the local police force – some with weapons drawn and randomly fired. My personal favorite is the assault from the clowns and circus performers, appropriately adorned with crazy hair, colorful costumes, and honking noses. This variety and eye for detail took an otherwise common zombie shooter and give it a high degree of personality. 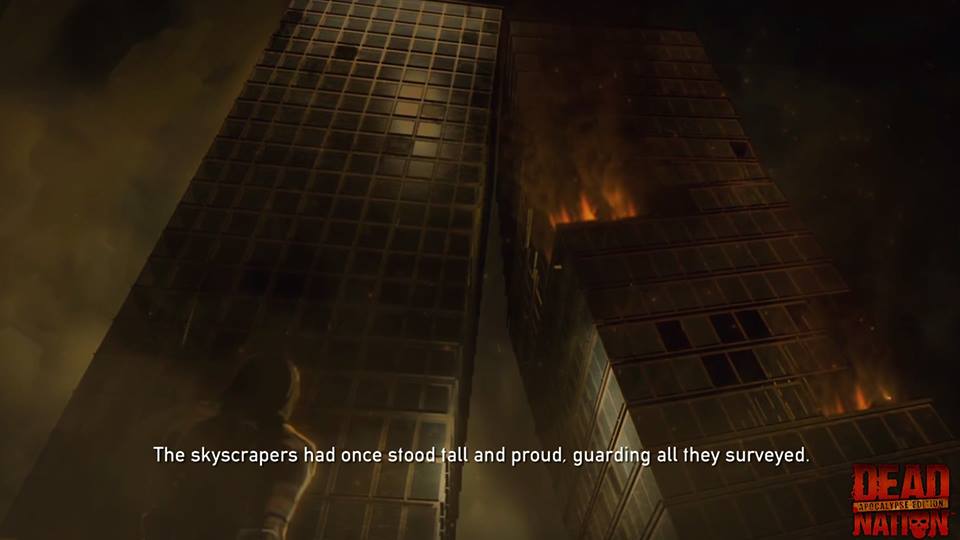 Although the idea of 3D gaming has mostly come and gone, 'Dead Nation' has always been on my list of games that I would love to play with that effect turned on. Watching a horde of zombies attracted to a car's alarm just before it explodes never gets old. Seeing pieces of their bodies flung into the air and at the screen would be a joy to behold in 3D. Just saying . . . there's immersion, and then there's immersion.

Aside from the occasional motion comic cut scene, where you'll hear one or the other characters describing the tragedies of the zombie apocalypse in their most gruff voice, the real highlight of the audio comes from the little nuances you encounter during gameplay. Regardless of how cautious you may be when walking the streets of Zombie USA, you will inevitably stumble through the detritus that alerts the zombie horde of your approach. 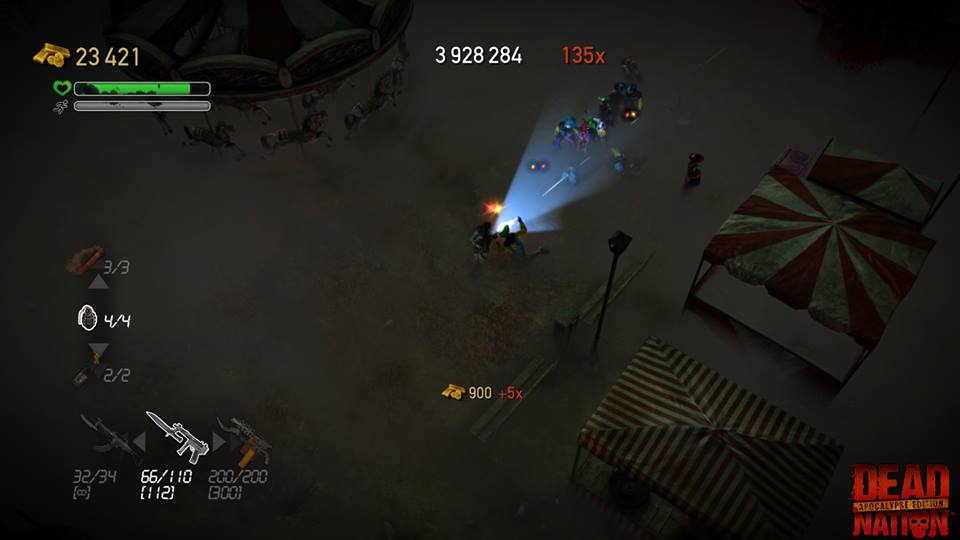 Empty cans, glass bottles, the remains of the undead, all deliver realistic sound effects. It was consistently hard not to be disturbed by the squish of zombie entrails under your feet when no other path was afforded. There was a particular moment in the game when my character had knocked over a pile of garbage and the resulting can lid that wobbled in place, echoing off the surrounding buildings, seemed to go on forever. I cringed the entire time.

Housemarque also takes advantage, albeit in a limited fashion, of the DualShock 4's build in speaker. Similar to the voice effects they employed with their last PlayStation 4 game, 'Resogun', a change in weapon or item is announced and vocalized through the controller. If I had to guess, the voiceover they used is identical from one game to the other.

The replayability of 'Dead Nation' continues to be fairly high. Having the option to take on the end of the world solo or with a friend – either online or on the couch next to you – delivers a similar experience overall, but allows for a more tactical and strategic advantage when played co-operatively. Add to this the idea of score chasing, higher difficulty levels (from Braindead to Undead), Broadcast+ (explained above), and challenge modes that prompt the friends on your list to do better, and there are plenty of reasons to jump back into the 'Apocalypse Edition' more often than not.

Making another appearance, and bundled in with the 'Apocalypse Edition', is the 'Road to Devastation' expansion. Although it disappointingly does not continue the story of the survivors you play as, it does introduce new environments, zombie variety, and the option to choose from a handful of available paths, while mimicking any number of wave-based horde modes we have already seen. Just as difficult as the main game, this bonus content is best experienced with a partner at your side. 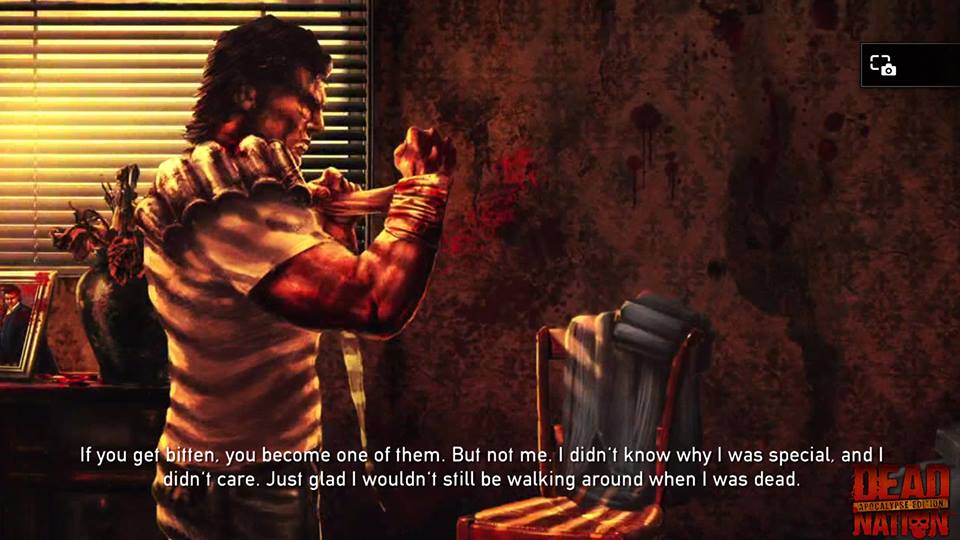 Even though 'Dead Nation: Apocalypse Edition' comes with a fresh coat of paint and a few additional bells and whistles, it's still a game that many PlayStation devotees have already experienced. That's not to say it isn't a great addition to the growing list of games available for the PlayStation 4. The developers at Housemarque continue to excel at their craft and have delivered yet another wonderful title that makes use of tight controls while providing solid gameplay. Whether this is your first time experiencing 'Dead Nation' or not, there's no question that the game is worthy of your time.