Both the Xbox One and PS4 entered into the market filled with expectations of all kinds, including being able to replicate the features and abilities of the previous generation.  This is particularly true with regards to media playback, an area where the new consoles have exhibited some serious omissions when compared to the older hardware. The Xbox One debuted as the first Microsoft console to contain a Blu-ray drive, and it debuted with hosts of media apps unheard of ten years ago, such as Netflix, Amazon Instant Video, and Xbox Video.  The Xbox One even desires to control the user's TV, AV receiver, and cable box.  But what about controlling those apps and features?  The Xbox One controller is certainly a workable solution, but the Xbox One offers its players an alternative, the new Kinect.  Of course, there are many people and many situations for which neither controller nor Kinect is the preferred and comfortable way to control media.  The Xbox One can be controlled through IR by third party remotes such as the Logitech Harmony Ultimate, but with the debut of the Xbox One Media Remote, it seems that Microsoft has recognized that part of the user base just wants a tidy, official remote to control their new system's media capabilities.

To be clear, the Xbox One Media Remote is a little less fully-featured than the nineteen bullet points listed on Xbox.com would seem to suggest.  Using Infrared, which requires line of sight to the front of the Xbox One, the Xbox One Media Remote can turn on and off the system, navigate the system menus, control the media apps, and has a button dedicated to accessing the system's OneGuide feature. If the Xbox One is set-up to control the user's TV and AV receiver through the Kinect's IR Blaster, then the remote can control the volume, mute, and change channels.  The basics beyond that are a twenty button backlit remote, powered by two included AAA batteries. 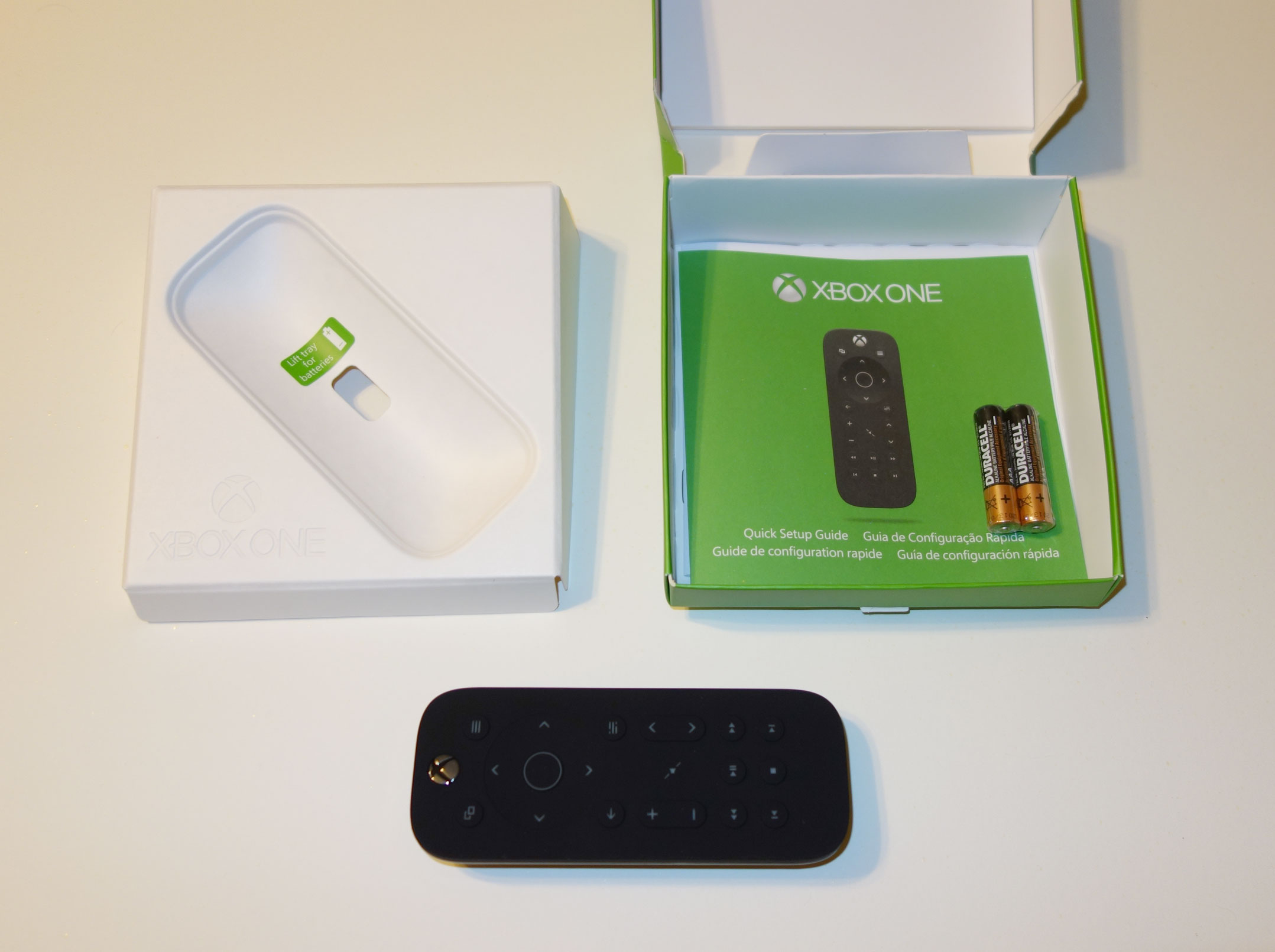 The Xbox One Media Remote has several quirky characteristics that go beyond its actual button assignments. The entire remote, except for a thin line around the case edge and the top center Xbox button, has a black rubberized texture and this includes all of the other buttons.  This is likely a play for style and distinction but comes with several drawbacks.  For one, the rubber texture attracts dust, lint, etc., and it's not as simple to wipe clean as conventional remotes.  More odd is the button design.  Though all the buttons look flush at first glance, most have a slight, but noticeable, elevated position.  The center directional arrows are depressed into the remote, also at a slight but noticeable distance.  Only the Mute button is flush with the remote's top surface, which is odd, and I have concerns that repeated use will cause the mute button to become, by degrees, pushed-in in an ugly wear-and-tear manner.

One might wonder if the remote began its life as a flat credit card design before evolving to its current state.  The bottom of the remote is equally odd.  The remote's bottom is raised lengthwise in the center and rounded off on all sides, creating a protruding hump.  The effect of this choice for the bottom is pleasant enough to hold in the hand, but does mean that the remote wobbles whenever place down with the slightest amount of force. With or without batteries, the remote does balance fine (after a relative amount of wobble) on its soft hull.

The remote contains a gyro so that when picked up or moved, it instantly illuminates. The dark design and tiny translucent button indicators make the illumination quite necessary.

Along with major concerns about wear-and-tear on the soft rubber texture, the remote as a whole doesn't seem like it would react well to being stepped on or thrown at another family member.

Twenty buttons may sound like a lot, but it's not.  The remote does omit the typical, but rarely useful number pad, though since it's meant in part to control channel changing in the Xbox One's TV app, those numbers might have been useful for that. 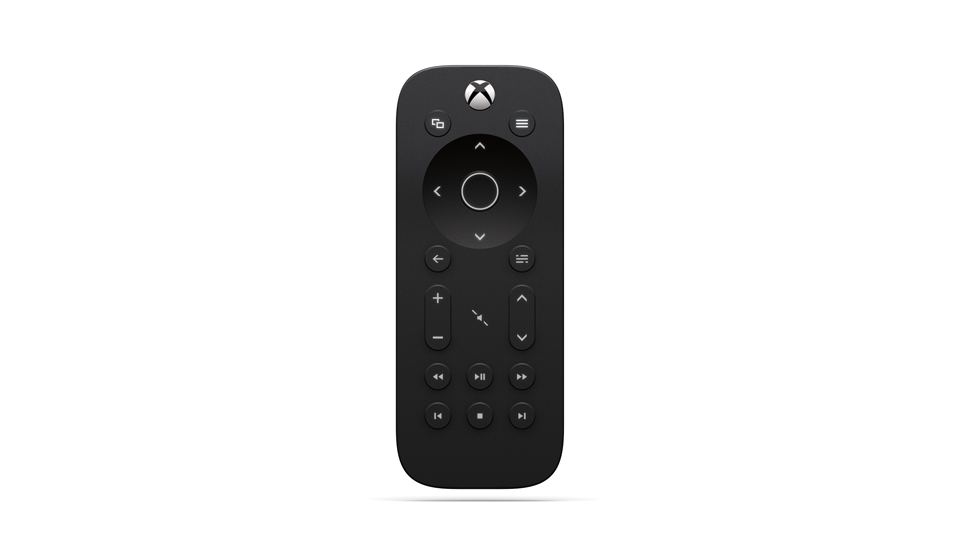 The top of the remote has a View button (which would be the Back button on the 360 and Select on the PS3), Xbox Button, and Menu button (which would be the start button on the 360/PS3).  These three buttons mimic their controller counterparts, making two of them essential.  The remote lacks a power button, but the remote's Xbox Button powers the console on and off much like the controller does.  The Xbox button powers on the system if pressed for three seconds.  If pressed for three seconds when the Xbox One is on, the familiar system prompt asks if the user wants to the turn the Xbox One off, which can be answered by the next group of buttons.

Beneath those three buttons are the direction and enter cluster, which get the most use when navigating the system's UI/menus or when browsing apps like Netflix.  They are also most essential for whenever using a text field.

Beneath that are a pair of buttons unique to this remote.  On the left, the remote has a dedicated back button, which is a heck a lot more useful for navigation than the View button, but is also confusing to reference.  The right button is dedicated to the Xbox One's OneGuide, which I have to say is a waste, at least for the moment.  The OneGuide takes the user to a menu that has shortcuts for some app programs (as in particular video segments on the ESPN or Amazon Instant Video apps) and some TV app channels.  It may become useful in the future but it's wasted right now.  The OneGuide button, unfortunately, also looks a lot like the Xbox One Menu button.

Beneath that are five buttons of dependant usage.  On the left, there is a volume rocker. In the center is the mute button.  These buttons work through the IR Blaster on Xbox One's Kinect module to control either the TV or AV receiver.  For me, without a messy IR extender, the Kinect module above my TV can't reach my receiver below my TV, though it is all compatible. Still, these buttons can be really useful depending on your set-up, but it's a shame that the remote doesn't have its own internal way to directly command another IR device.

To the right of the three button volume control cluster is another rocker, and this one is meant primarily to change channels in the TV app, which is meant to control the user's cable/satellite box.  The Xbox One doesn't recognize my cable box's brand, Conax, so this rocker is somewhat useless for me.  It does seem to work for other things, like moving between the main UI screen and the two flanking screens, and like the OneGuide button, contains the potential to be useful at a future point.

Below the Volume and Channel buttons are six straightforward playback buttons.  Rewind and Skip back on left, a combo Play/Pause button above the Stop button in the center, and Fast Forward and Skip Forward on the left. These buttons naturally manage basic but crucial media playback to varying effect.

I tested out a number of media apps including the Blu-ray, Netflix, Amazon Instant, and Xbox Video apps.  Rewind, Play/Pause, and Fast Forward all work as desired.  (No more waking the controller or using Kinect to pause a 45 minute Netflix program.) Stop works almost as well, though Amazon then asks if the user wants "to quit playback."  The Skip Back and Skip Forward buttons are useless unless watching a Blu-ray, where they skip through chapters and titles (and previews) quite well.

For Blu-ray playback, the remote obviously lacks any specific buttons like an audio track toggle button.  Worse though is the behavior of the Menu button (which again would be the start button on the 360/PS3.)  With an Xbox One Controller, the Menu button will bring up the ever-important Pop-Up menu during playback.  For whatever reason, the Menu button on the remote does not.  Instead, the user needs to press one of the media playback buttons, like the Play/Pause button which will briefly make the Blu-ray app's overlay menu appear.  While that menu is up the user can use the direction and enter cluster to navigate to the left, where an on-screen group of Blu-ray buttons can be accessed, including a button that activates the Pop-Up menu.  Presumably, this unfortunate oversight will be corrected in the future. (Thanks to a patch, the Pop-Up menu can now be accessed by pressing the up arrow.)

The remote does little for simplifying switching between snapped apps.  The media playback buttons always control the main windows media app, and ignore the snapped app. 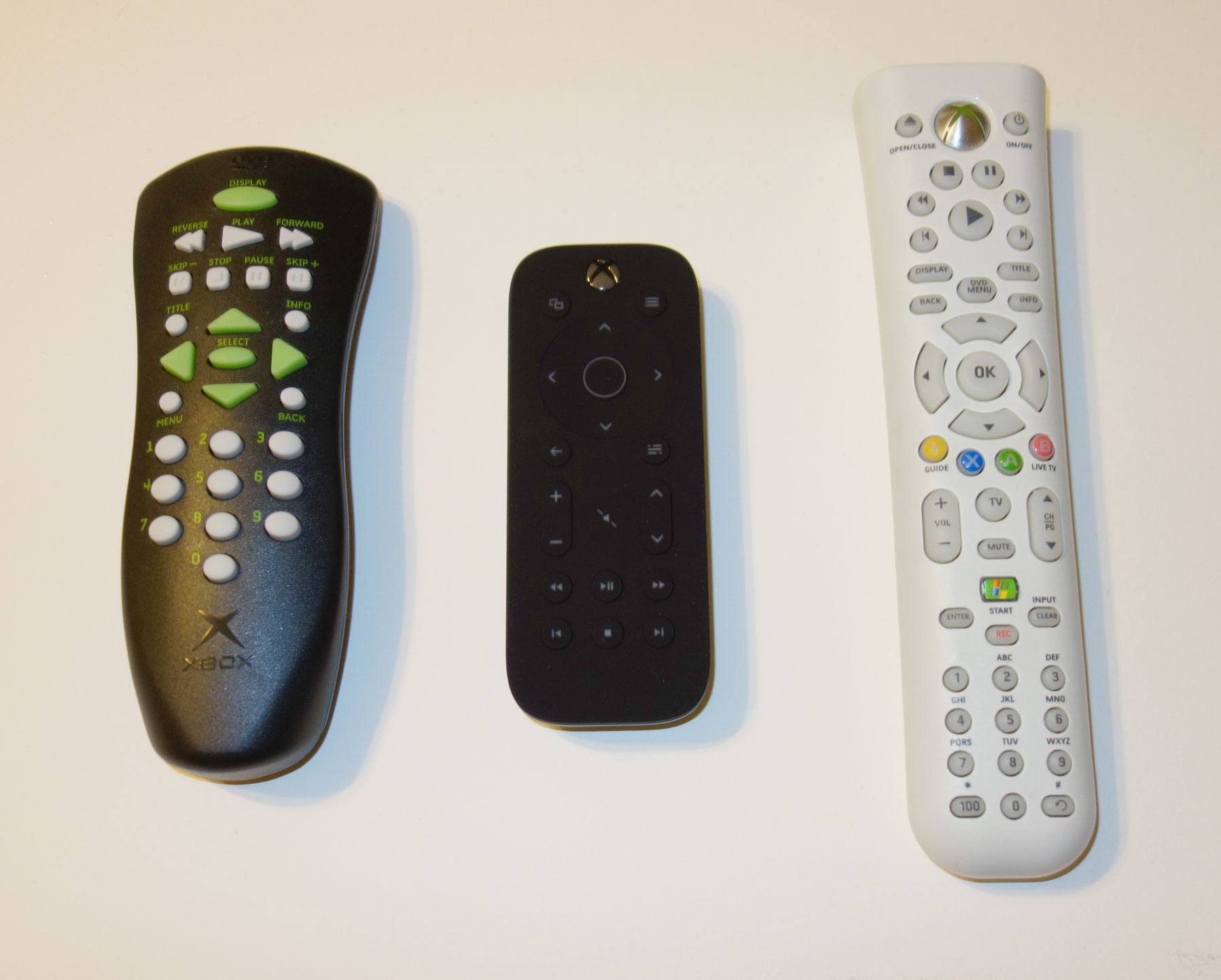 Apart from an internal ability to directly control volume and channels or some kind of remapping ability, what the controller really seems to be lacking even as a basic controller is some subset of the A, B, X, and Y buttons.  Both the old 360 and PS3 remotes included this kind of failsafe control, which helps with apps not optimized for the remote.  This is no more obvious than when searching through an app like Netflix.  (Or in my case, searching for the brand of receiver and cable box in the system set-up.) Just drop into a search field and suddenly not being able to backspace or to enter a space without having to d-pad over to the on-screen button, makes using the remote a little tedious, at least without a subset of the A, B, X, and Y buttons.  (It gets worse if you misrecognize and hit the Back or OneGuide buttons.)  Hopefully, Microsoft will come up with a better way to enter text with the remote, but it goes to show how suddenly poor the system can be to navigate without those controller buttons available to bridge the gap.  Some way for the remote to eject discs might have made sense as well, but it's really surprisign that the remote does little to enhance the system's app snapping abilities.

As readers have pointed out, the remote does not currently support the YouTube app (or vise versa) in any way. 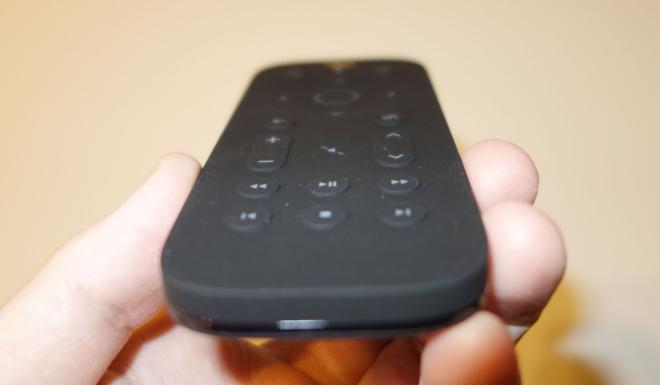 If you own and use an Xbox One, you likely already know if the Kinect module can usefully control your volume and channels, or if you've ever found the OneGuide useful.  For basic navigation and media playback, the Xbox One Media Remote easily beats using the controller or Kinect.  That is until you have to type, access the Blu-ray Pop-Up menu or attempt to use the YouTube app, and those issues will (hopefully) be corrected sooner rather than later.  These quirks along with the remote's questionable materials scream early adopter, but for anyone using the Xbox One media apps regularly, the Xbox One Media Remote is recommended.