Xbox 360 version reviewed. This review contains some spoilers for 'The Walking Dead: Season 1' as well as season two's first episode, 'All That Remains.'

Telltale pushes on in season two of 'The Walking Dead' with 'A House Divided.' Clementine's solitary journey continues as she wrestles with characters in a new group, just as the developer's journey continues as it wrestles with a world devoid of Lee. As the young hero seeks out safety and companionship, the player must make her most difficult decisions for her. Telltale's ability to balance story and gameplay in their groundbreaking first season made it almost impossible to tell when it's you or the game pulling the strings. Maintaining that trend with season 2 has to be the core expectation.

In a short two hours I killed many a zombie foe, wrestled with decision heavy and light and saw a young girl weave through one sticky situation after another. Clementine is an excellent perspective on the zombie apocalypse, a beacon of goodness among the aged, the weary and the stupid. Like any incarnation of 'The Walking Dead,' the strengths of this video game and 'A House Divided' in particular lay in the protagonist's interaction with the living, not the dead. 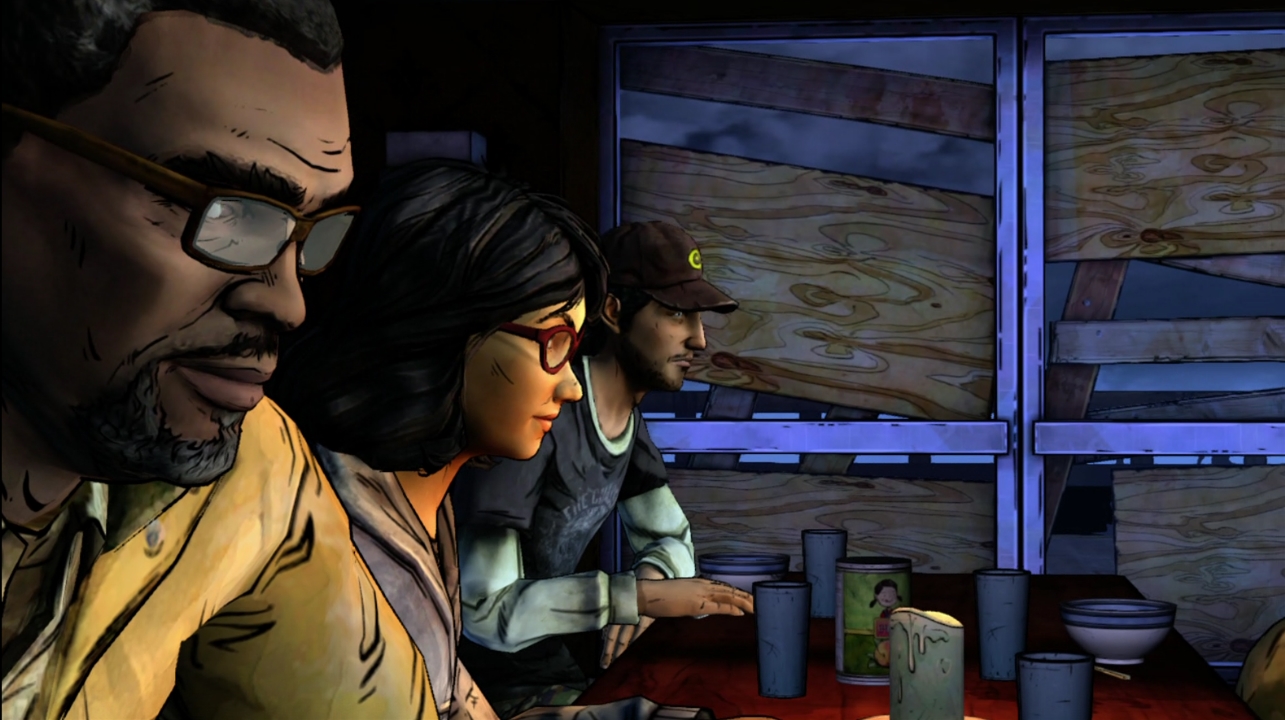 Unlike those other incarnations, however, the comic book or the show, this season of 'The Walking Dead' is continually failing to capitalize on its medium. Supposedly a video game, I've never felt more like a passive viewer, and just a bit of the tension cultivated in the series' first season is suffering for it.

I can recall two moments where I was both in control of Clementine's movements and truly concerned over the outcome of my actions. Any other moment that was either compelling or dangerous was simply a movie with dialogue options, an interactive TV show. In the first, a shadowy man passed across the windows as I maneuvered to answer the door. In the second, I simply had to choose with whom to eat dinner, a small expression of loyalty with lasting implication. These are subtle, unnerving moments that reach out to me through the screen. They're why 'The Walking Dead' works so well as a video game, but right now they don't feel like enough.

Last season I might've been trying to maneuver a twisted woman to the clutches of a zombie - her previous victim of cannibalistic tendencies. I might've straddled across a chasm as Lee in desperate search of Clementine. I might've preemptively killed a man in fear of his inevitable gruesome turn.

Don't get me wrong. I'm enjoying Clementine's post-Lee adventure. I just wish it was more my adventure as well. Other small, mechanical elements play into the anti-autonomy trend. Aiming your gun as Lee was a challenge, especially under the pressure of saving your own and Clem's life. Now the game nearly aims for you, requiring only that you put the cursor in the basic vicinity of a zombie's head for a hit.

Further, the puzzles are laughably simple. Clementine is tasked with operating a large machine. Pressing the A button twice is all it took. Compare that to starting up the train in last season and Lee is rolling over in his grave. For a game as narrative minded as 'The Walking Dead,' you might not hold in high regard the challenge a puzzle presents. I've come to believe it's the balance of gameplay, conversations and choices that make this a game worth playing. Telltale seems to almost resent that their series requires a controller this time around.

Fortunately, we have a new villain, whose motivations are human and understandable, his actions not so much. William Carver is exactly the kind of character that can throw a person's flaws into the spotlight, and he's a man that seems to have accepted his new world with frightening efficiency. Clementine's group spends much of 'A House Divided' outrunning this man and his followers, and as the narrative progresses we learn some of our new "friends" may just be outrunning the mistakes of their past, and Carver is at the center of it all. Other than Clementine, he's the reason I can't wait for episode 3.

Compared to the Kennys, Bens and Lillys of last season, all of whom were still a reflection of the better versions of themselves pre-apocalypse, we're in much darker, yet much more ambiguous territory now.

It's greyer, the further into despair we get, the more brutal our recurring cast becomes. The one relentlessly optimistic character introduced in the episode is, unsurprisingly, our biggest victim, possibly our last look at the brighter days of past. He even felt like a caricature in the midst of realistic people, which in itself is the best indicator of this season's gravely tone. So is Clementine's own progression from child to adult, a well-earned backbone to season 2.

There's a lot of groundwork out in the open now, and as scripted and linear as the gameplay feels, the potential for violent disagreement is strong as ever. And we know how successfully 'The Walking Dead' capitalizes on people who can't see eye-to-eye.

The best part: Clementine is sharper than she's ever been, and her ability to cut through all the BS makes her exactly the kind of player we'd all want to be in these kinds of situations. Simultaneously vulnerable and strong, it's still her words and her choices that define a scene. The more we get to manipulate those words and those choices, the better.

I celebrated the continued style of 'The Walking Dead' in season two during my review of 'All That Remains.' Neither that nor some lingering issues with the tech behind the game are changed. Some of the scenes are still oddly dark as well. Nevertheless, 'A House Divided' highlighted some of the great facial work by the Telltale team. The shared looks between Clementine and her new pals, especially Luke and Nick, convey more emotion than a script ever could. Everybody's fear, relief and dread is captured almost perfectly, and it brings a lot to a given scene.

The excellent voice acting continues to enliven the smaller moments between Clementine and the rest of the cast. Clementine's assertive, sometimes irreverent delivery often allows her to communicate with the older characters on their level. Again, I can't oversell Melissa Hutchison's ability to keep Clementine's age while also reflecting the wisdom forced on her by this terrible world. Michael Madsen also joins the fray to chilling effect.

As the series continues its trend towards linearity I find the replay factor is less and less. Still, the incentive to see how one decision can change the narrative is there, so the score should remain the same. Plus, Clementine is awesome.

The percentage of people who made once choice or another is still displayed at the end of each episode. Really, isn't that the reason we do this? It's a big one for me.

As much as I harp on the topic of autonomy and linearity, I still find it extremely difficult to fault the game in my final calculation. 'The Walking Dead' as a whole and this latest episode are doing amazing things for storytelling in games. Clementine is an all-time great character, this season solidifying her as a unique and compelling protagonist, and William Carver might just be the series' best villain. He may not even be a villain in the coming episodes, and it's exactly that kind of ambiguity that keeps me on my toes. It keeps me wanting more. 'A House Divided' fleshed out the group and offered up some moments of sincere tension and, for some of us, regret.

Yes, I'd like it to feel a little more like a video game, in that I'm at the controls. But, on the flipside, I'm happy to watch these characters play out their own lives as well. Season 2, right now, is getting away with its faults. 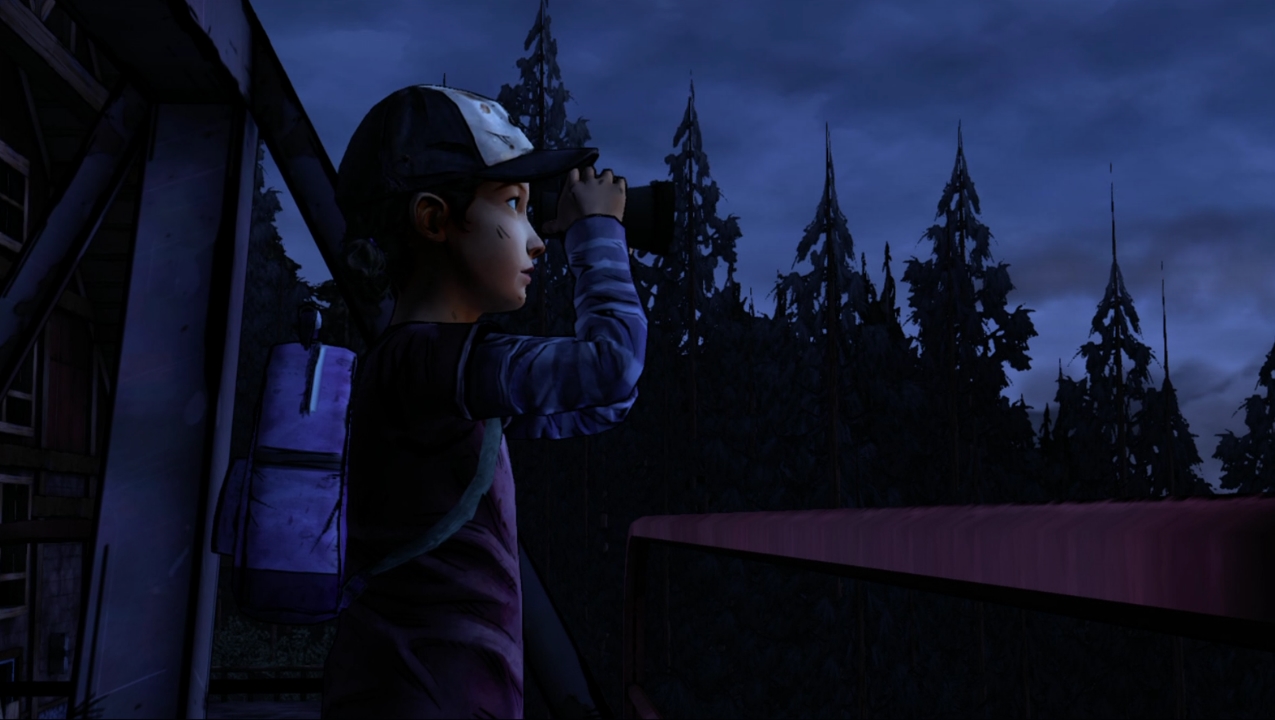