3DS
Worth a Look
3 stars The Game Itself
2 Stars
The Video: Sizing Up the Picture
2.5 Stars
The Audio: Rating the Sound
1 Stars
Replay Factor
3.5 Stars
Bonus Content
2.5 Stars
Bottom Line
Worth a Look

Lapping up enemies and popping out eggs with the expediency of the world's last asexual rabbit belongs to just one video game character, and in Nintendo's recent reproduction of popular platforming franchises at a similar rate, it's no surprise that Yoshi returns in his own adventure. 'Yoshi's New Island,' a 3DS sequel in the series spawned from the SNES title long-hailed as platforming perfection, 'Super Mario World 2: Yoshi's Island,' attempts to reignite the dinosaur's solo career after years of stronger side-kick showings and various sporting avails. Baby Mario is in need of a ride and, ever loyal, Yoshi is there once again to trek the Shy Guy-filled path.

Were Yoshi a prideful beast, a trait I'd admittedly never attribute to the altruistic fella', he might be proud that the spotlight never waivers so far as to forgo a starring outing from time to time. But his latest couple of games haven't found glory, haven't found invention, and haven't found lasting impact. Were Yoshi prideful, he might find an ever-mounting sense of yearning in his gut, coupled only by the portentousness of every impending release. 'Yoshi's New Island' on the 3DS is no delivering of relief, no uncompounded pressure for success, for 'Yoshi's New Island' falters in almost every way. From artistic design to the very gameplay itself, rarely in my long history of platforming addiction have I felt this level of boredom and disconnect with what was happening on screen. 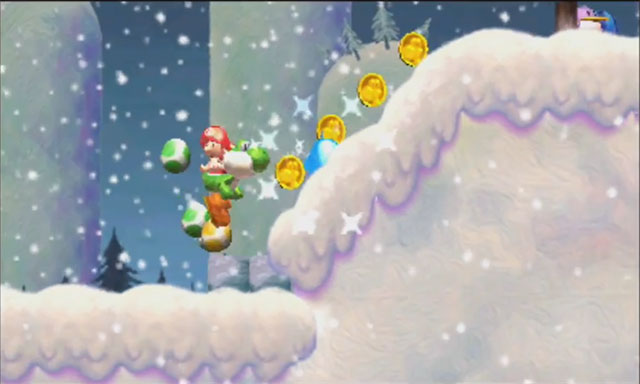 Were Yoshi prideful, he might be ashamed. But he isn't and he'll move on, to kart racing, smashing and golfing. We'll move on, but not before overcoming our disbelief. There was a time when firing off eggs and flutter-jumping felt refreshing. That time is not now. And after pushing myself through this small and insignificant game, it feels eons ago that I actually enjoyed chasing down a wailing baby Mario before he's scooped up and flown away. That, perhaps, is the worst sin of all. I'm all Yoshied out. 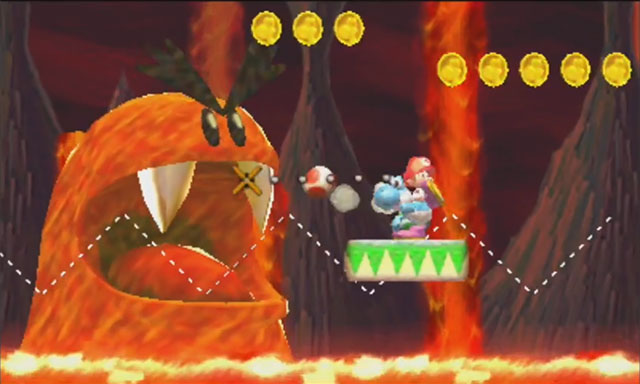 All those things that Yoshi does, and has done since 'Super Mario World 2: Yoshi's Island,' are present and accounted for, so it's not for a lack of authenticity that the title consistently fails to keep your attention. Shy Guys on stilts block the path, but that path is flat and uncharacteristically easy to cross. Windmill platforms await Yoshi's weight to move along a railed path, but those paths are short and straightforward, nary a twist to throw your analytic momentum. Vehicle sections are completely cut off from the level itself. They utilize tilt controls so simplified I could have laid the 3DS on its side and lazily tapped the A button to successfully maneuver certain trails. 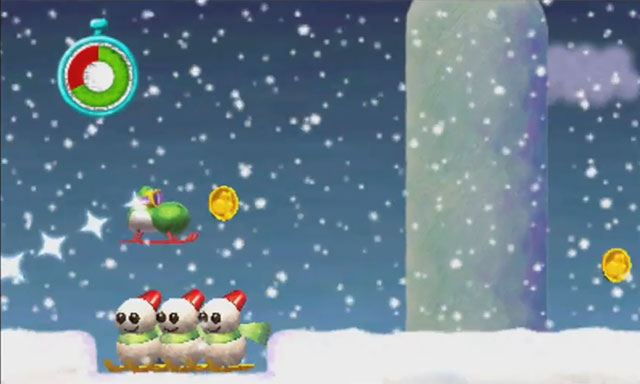 And boss fights, of which there are plenty, never test your abilities, never challenge your mind and never last long enough to be memorable in the least. Three hits and you're done, every time, not having strained so much as a twitch in your thumb. 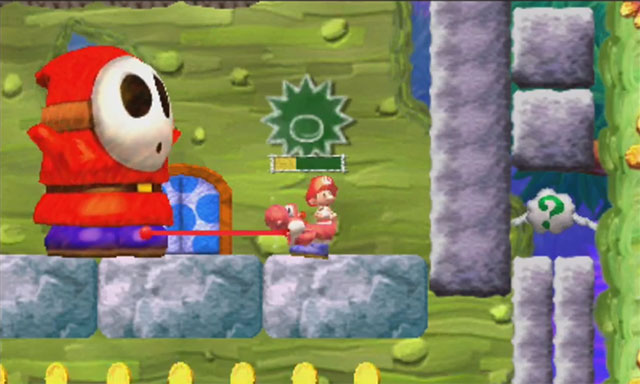 This is an indescribably easy game, but that in itself isn't enough to drag it down. 'Kirby's Epic Yarn' wouldn't let you fail, but I was happy not to over the charming backdrop. 'Yoshi's New Island' tries its hand at childish charm and fails, yet gives almost no effort in the way of level design. What few twists are thrown in – a giant Shy Guy swallowed for a giant egg or a giant metal egg that sinks Yoshi underwater – are utilized in just one way, over and over again. The best platformers find unique elements, teach you those things and then mix and match them in increasing complexity. Not even Yoshi's basic moveset is applied to the level design. I rarely felt the need to use his flutter jump, and if you do take damage and baby Mario is in peril, recapturing him is often quick and totally painless. There's simply no tension, no surprise. It is, at best, dull and functional. Ironically, what challenge exists is reserved for the side paths on the way to the game's multitude of collectibles, which I never felt motivated to actually collect due to the main paths' inability to engage. When I did make the effort, it felt like tedium as a result.

When they aren't blurry, the character models in this game are absolutely great. Coming off as sort of a savant toddler's first or second go at drawing, concerned more with form than perfection, Yoshi and his fellow travelers are filled in with scratched crayon and, possibly, children's dreams. Unfortunately, good ideas in the style department aside, everything visual in 'Yoshi's New Island' is undeniably cheap and quickly done. The backgrounds are vacant of any personality, achieving only the bare minimum in scene-setting. Levels themselves are mostly nondescript and repetitive. Even some sprites seem unfinished, jagged edges where a curve should be. 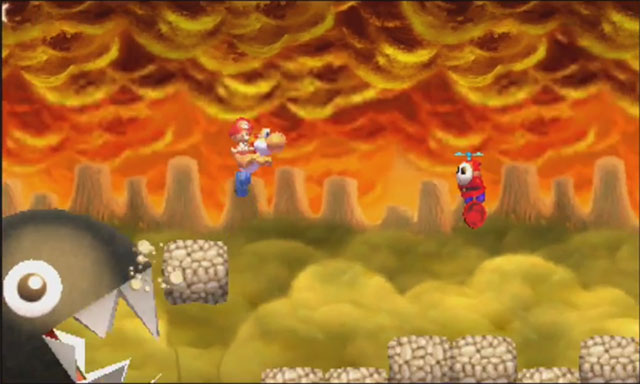 The 3D effect, while certainly present, further highlights the slapdash nature of it all. Some animated affects pop out just a bit too much, disconnected from the scene, and nothing in the level design even feels commensurate with the 3DS' capabilities.

Still, here and there you'll come across a well realized element to the original idea – a child's imagining of Yoshi's world. It's just not a cohesive effort.

What positive things can be said about the visuals do not extend to the audio. There is a theme to it all, but the execution seems determined to match baby Mario's wails in pure annoyance. Kazoos and squeaks (I imagine a xylophone made of rubber duckies somewhere) sleepily play you through a basic main theme, repeated and just barely iterated on as the game progresses. It's a trance that you're put in, the kind that makes you want to put the console down so you can wake back up. No, that's not a metaphor for the entire game, but I do recommend you simply slide that volume control down to null. Even the small riffs signaling some sort of success, like a boss defeated or level succeeded, find a way to make you regret having ears.

Clearing the game to 100 percent is a meaningful task, as carving out every corner of every level is neither intuitive nor obvious. As I mentioned before, finding those happy flowers floating around often leads you to the game's most challenging sections (which is to say, you might have to actually use your flutter jump), so those with a desire to find everything will be rewarded.

Players can unlock six local multiplayer minigames, which is an important plus for a 3DS title. The simple gameply works well in short multiplayer bursts. 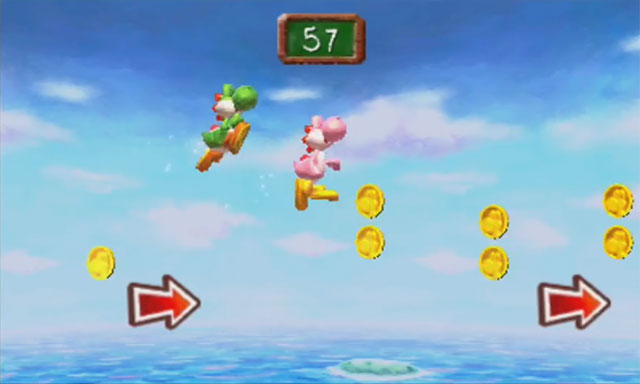 So for me, veteran platformer (including Nintendo's many offerings), 'Yoshi's New Island' doesn't deliver. I'm forced then to conclude that I'm not the audience for this game, and that it would be much more suitable as an inexperienced gamer's first platformer. 'Yoshi's New Island' may actually fill a void in the world of gaming right now as the 3DS is as often in the hands of veteran Nintendo diehards like myself as it is in young, impressionable new gamers. I imagine a solid chunk of youngsters can enjoy this game as a step towards the bigger, the better and the more challenging.

It is perfectly functional, and if you've never played a platformer before, the ideas, visual and design-wise, could pique your interest. And that's worth saying in this case because much of the game looks and feels like it was made for a significantly younger audience. There needs to be room for those games. As such, 'Yoshi's New Island' has some redeeming qualities beyond what I've covered in this review, and the overall score is indicative of different set of gamers. It just wasn't made for me and the rest of the experienced bunch out there. 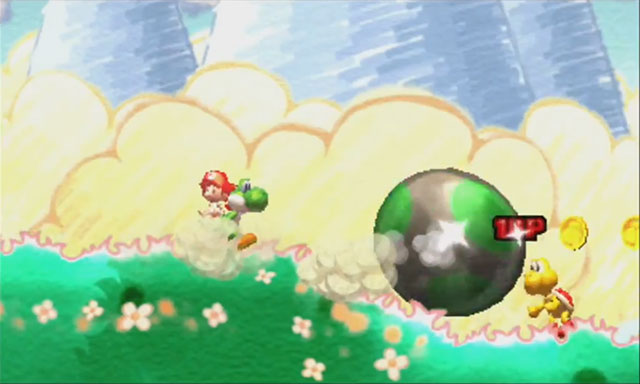 Even so, I won't completely absolve the game of its faults. The upcoming Yoshi yarn game from the people who made 'Kirby's Epic Yarn' could very well please both audiences, which is the hallmark of a great kid's game anyway.