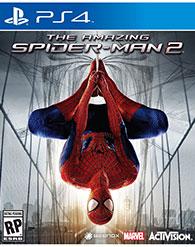 The Game Itself
3 Stars
The Video: Sizing Up the Picture
2 Stars
The Audio: Rating the Sound
2.5 Stars
Replay Factor
1.5 Stars
Bottom Line
Worth a Look

Digital PS4 version reviewed. Review is spoiler-free with regards to the movie.

Canadian-based developer Beenox is no stranger when it comes to the Spider-Man franchise. Their creative efforts shone the brightest when they strayed from the more conventional story arc with the releases of 'Spider-Man: Shattered Dimensions' and 'Spider-Man: Edge of Time.' Since then, they've embraced the movie tie-in with Sony Picture Entertainment's 'The Amazing Spider-Man' film series. 'The Amazing Spider-Man 2' is the latest third-person action-adventure video game that is intended to build upon the story of the previous game, while also giving players an enhanced, free-roaming web-slinging experience. But does this second movie tie-in make for a better overall experience, or do they continue to sacrifice creativity?

While it seems like just yesterday I was reviewing 'The Amazing Spider-Man' for the PlayStation Vita, my recent play through provides a unique opportunity to better evaluate what, if any, changes have gone into Beenox's latest development effort. Although a busy schedule has prohibited me from enjoying the newest theatrical release, if the last game in the series is any indication, it comes as no surprise that this playable version of 'The Amazing Spider-Man 2' is a loose representation of its big-screen counterpart. 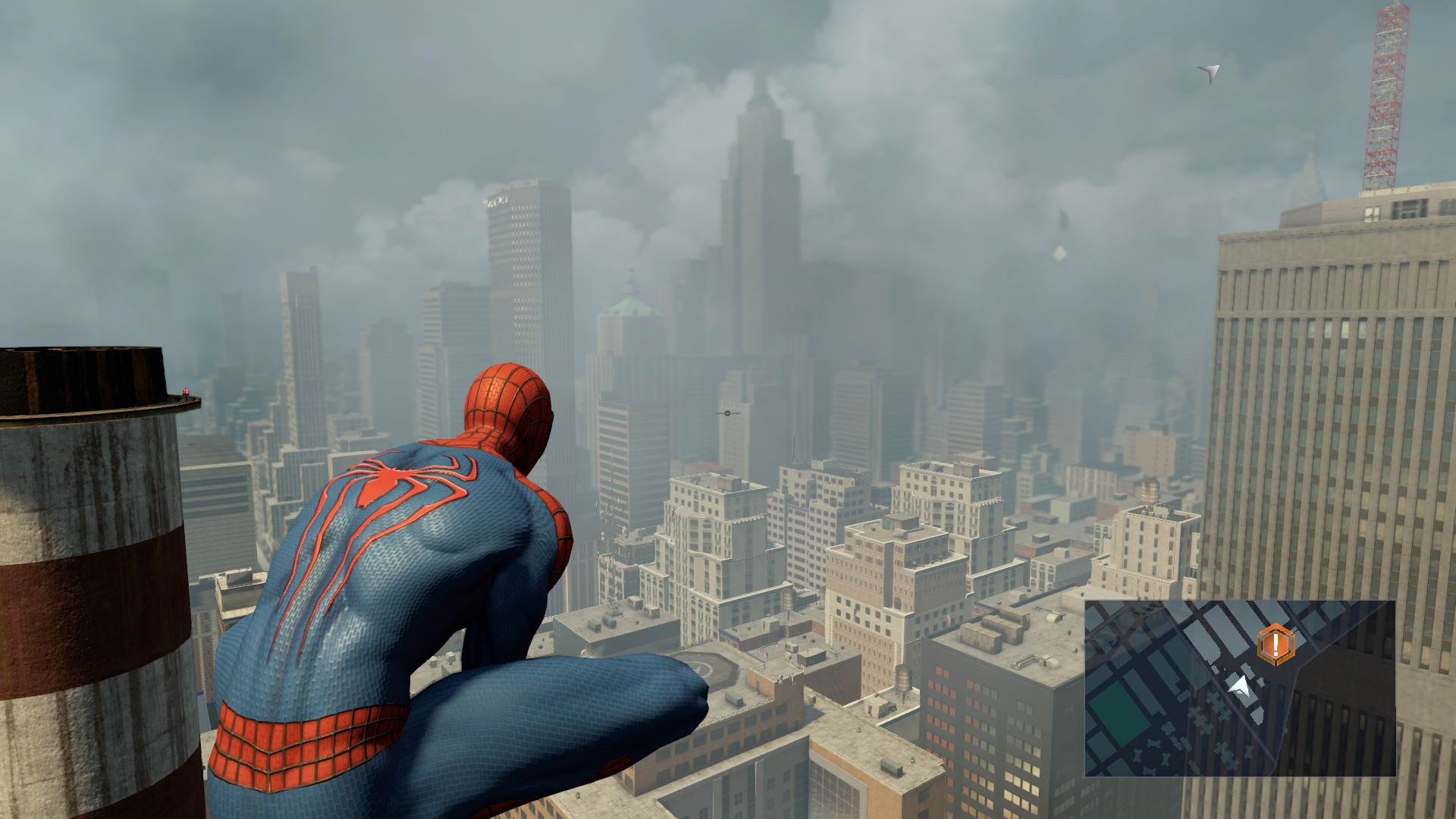 'The Amazing Spider-Man 2' begins with a brief flashback of when Peter Parker became a crime-fighting arachnid after witnessing the death of his father figure and uncle. From there, the story spirals somewhat out of control as the web slinger attempts to unravel the mystery behind warring gang factions and a mysterious vigilante known as the Carnage Killer. Other, more stable characters from the franchise – Harry Osborn, Kingpin (Wilson Fisk), Kraven the Hunter – make periodic appearances, but their involvement seem more convenient to allow for repetitious, arena-like boss battles than furthering the story in any meaningful way.

I generally have fairly low expectations of any movie tie-in video game providing a thought-provoking story, and 'The Amazing Spider-Man 2' is no different. However, it's the freedom of swinging through the streets, looking for crimes in every back alley that ultimately determines whether the game is enjoyable or another failed attempt. Thankfully, 'The Amazing Spider-Man2' somewhat succeeds. The developers at Beenox kept what worked from previous iterations and added a few new mechanics that (attempt to) enhance the experience.

Making a repeat appearance from 'The Amazing Spider-Man' is the return of Web Rush - a slingshot style method for Spider-Man to quickly traverse from one perch to the next. The web slinging has also been updated to become a more realistic representation of what it would be like to sore across the city skyline. No longer is Spider-Man able to attach his web to non-existent buildings (or those that are several feet beneath him). Instead, players will need to be more conscious of their surroundings and consistently position Spider-Man between buildings and closer to street level. 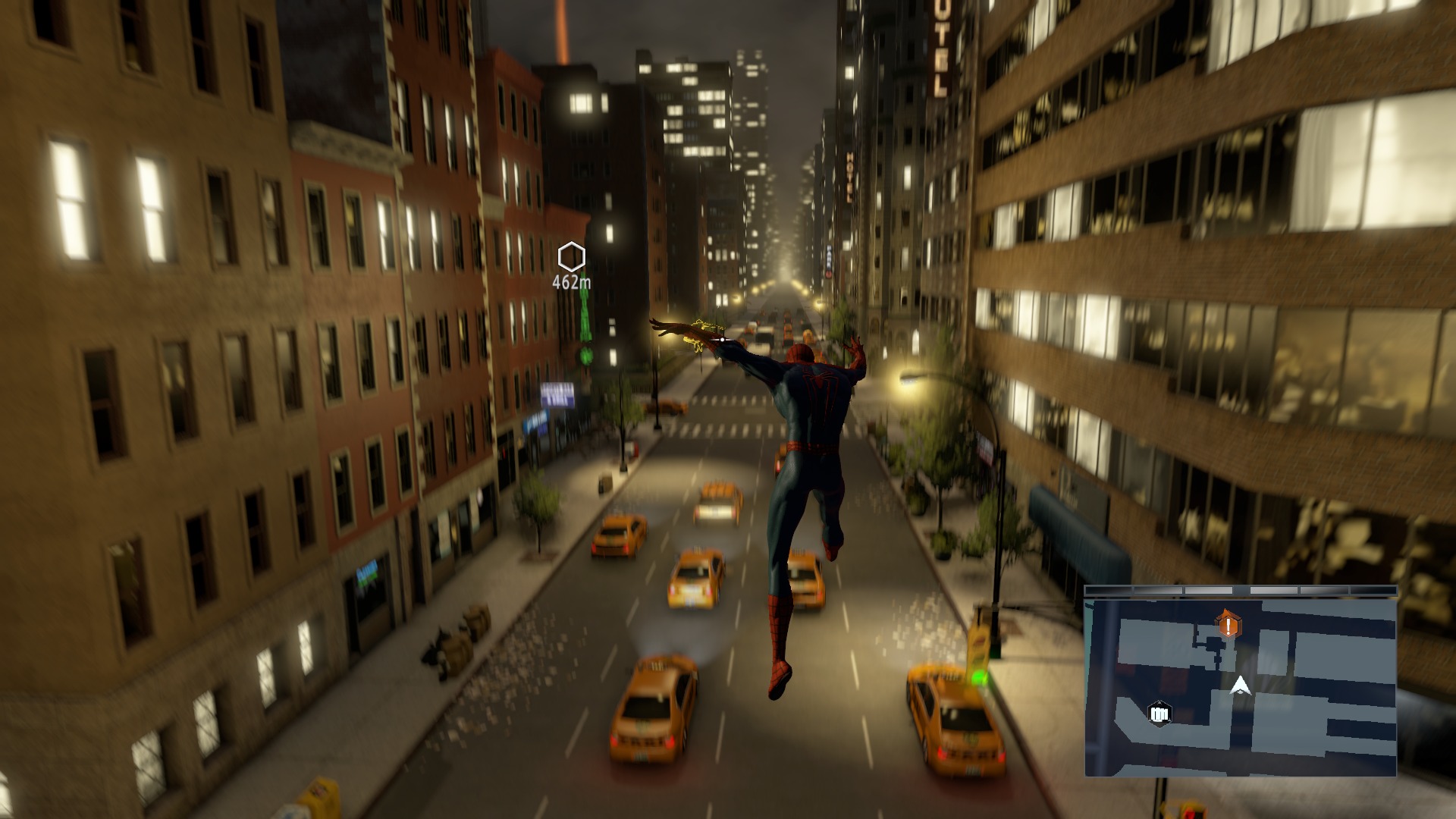 Additionally, alternating between the DualShock 4's L2 and R2 replicates the way in which Spider-Man shoots webs from his respective hands, attaching to the buildings on either side of him. Slinging too often from the same hand will pull you closer to that side of the street and throw off any momentum you may have built up. After an initial learning curve, getting into a nice rhythm while maintaining a closer proximity to the ground results in the most enjoyable and exhilarating Spider-Man web swinging I have experienced to date.

As in other open-world Spider-Man games, there are a variety of hostile and criminal activities the residents of the city depend on the web-crawler to manage. While in games past these amounted to nothing more than the ticking off of another trophy or achievement. 'The Amazing Spider-Man 2' makes sure that players don't forget about these petty crimes when considering the larger picture. A new Hero or Menace gauge is adjusted according to how many run-of-the-mill crimes Spider-Man has resolved or left unattended. The more criminals go unpunished, the higher the menace level becomes. As a result, Spider-Man's suit upgrades are directly affected through a decrease in damage bonus, combo streak, and shooting rate. Although these side missions quickly become routine, disregarding them to solely focus on the main story will eventually take its toll on your abilities as a super hero. 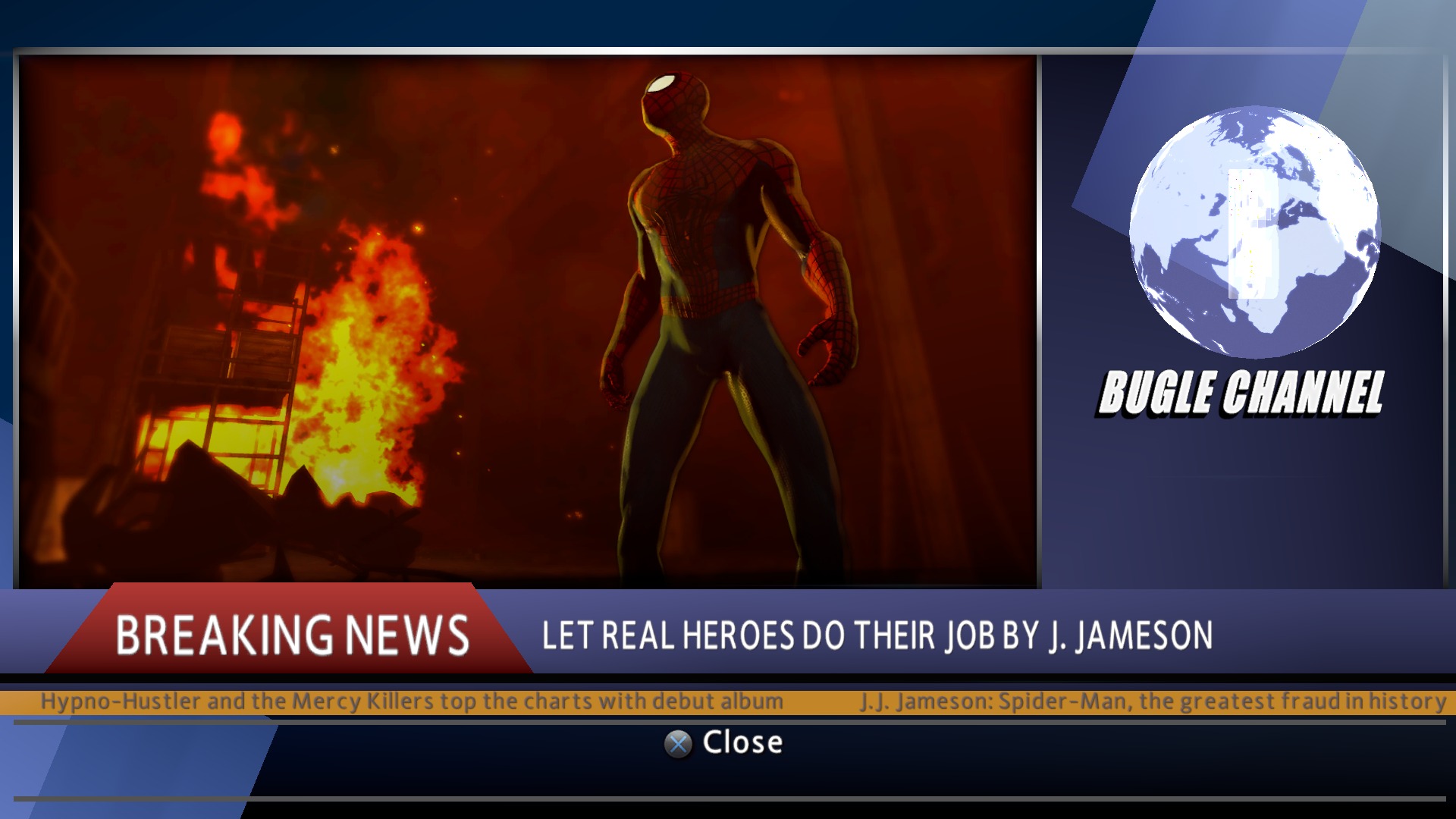 Some light RPG elements allow the player to level up a handful of abilities specific to Spider Sense, Web-Rush, and Web-Shooting. However, when compared to prior Spider-Man games, the options seem rather limited and less of a focus this time around. They get the job done, but very little difference can be seen from one upgrade to the next.

Finally, if patience isn't your thing, prepare yourself for an unusually high number of load screens - they hit often, and they hit hard. Whether entering or leaving a building, completing a boss battle cut scene, or changing from one Spider-Man suit to another, watching the load percentage in the lower left corner becomes a major distraction. In a console generation that boasts impressive technological advancements, one would think that a loading screen would be a thing of the past. Sadly, that's not the case with 'The Amazing Spider-Man 2'. 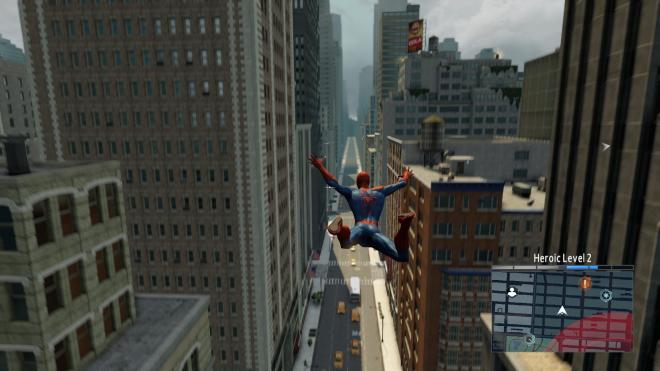 The opening moments of 'The Amazing Spider-Man 2' clearly represent a video game that was developed for the last console generation and likely ported over to the new. After experiencing PlayStation 4 games such as 'Assassin's Creed 4: Black Flag', 'Killzone: Shadow Fall', and even the definitive edition of 'Tomb Raider' it's hard to lower your visual expectations. Of course, how a game looks is just one part of the total package. But, when character features remind you of the PlayStation 3's infancy, you begin to question the budgeting that Beenox set aside for artistic improvements.

That's not to say that all of 'The Amazing Spider-Man 2' was a visual disappointment. The game's titular hero continues to impress from head to toe. When wearing any number of the unlockable costumes, Spider-Man truly jumps from the screen. The details of the individual webbing, the deep red of his mask and silver eyes, are some of the best that I've seen in action. But the detailed visuals end there and it makes everyone else around Spider-Man pale in comparison. 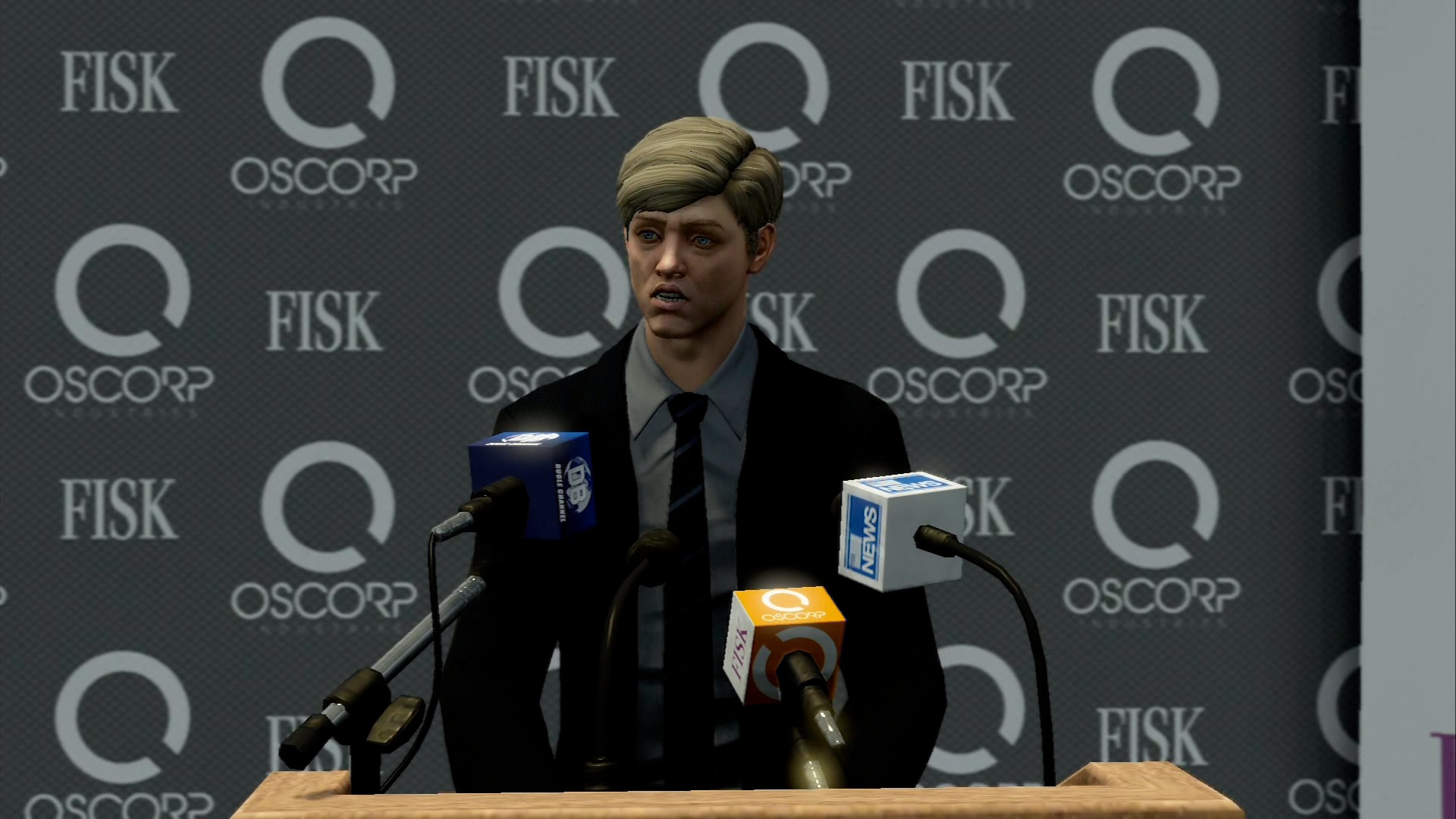 I was also impressed with the consistently smooth frame rate. Spider-Man's acrobatic and fast-paced combat never appeared to put a strain on the presentation; even when surrounded by a dozen or more enemies wielding a variety of weapons and attack abilities. Unfortunately, the same stability cannot be attributed to the unwieldy camera. As has often been the case with other Spider-Man games, fighting the camera occurs almost as often as fighting the enemies. It continues to be an unfortunate side effect of many 3rd person action games. Do yourself a favor when playing this game and avoid tight corners at all costs. You can thank me later. 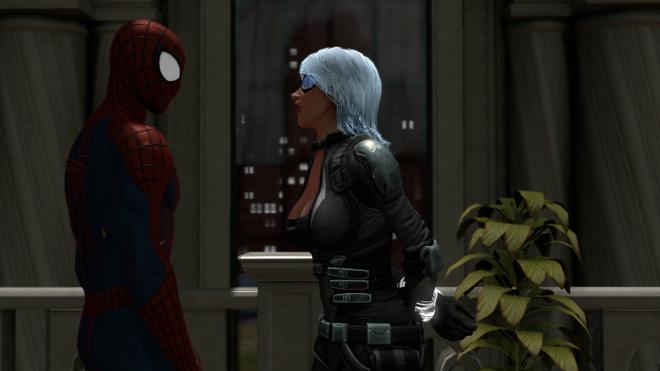 As might be expected, the actors from the theatrical release of 'The Amazing Spider-Man 2' were 'unavailable' to lend their voices to the development of the game's counterpart. With that said, the voice acting for the game was passable and got the job done. Unfortunately, even the best voice actors could not save the game's story from the tangled mess that it eventually became.

The real audio highlight for me was with the sound effects delivered when swinging through the streets of New York City. Flying between the towering buildings, mere feet above the heavily populated city streets, provided an effect that almost perfectly hit its mark. The whoosh of air that passed through my side and rear speakers from a 7.1 audio surround sound heightened the feeling of flying. The faster you sling from building to building the better the effect becomes.

Although completing the main story of 'The Amazing Spider-Man 2' still allows for final clean up of the criminal activity that may remain, there is little in the way to inspire a repeat play through of the game. Completionists will be tempted to search out and find every available comic book page (there are upwards of 300), complete every challenge, and unlock every costume, but finishing the campaign a single time will be enough for most casual gamers. 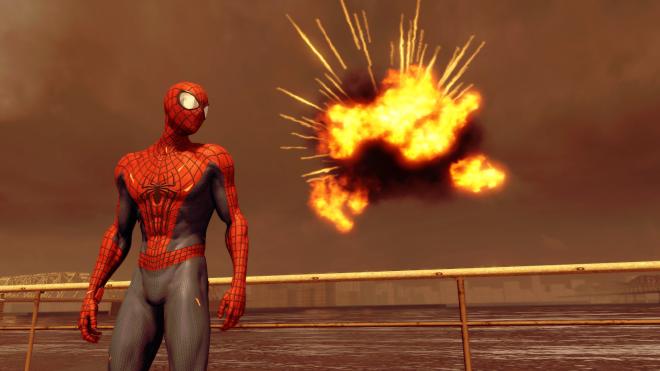 Movie tie-in video games have almost always been hit or miss. Some have been worth the effort, while most become regrettable purchases. Even fewer live up to or exceed the movies they are based on. 'The Amazing Spider-Man 2' falls somewhere in the middle. Although it's a visual let down when considering the console it was played on, the overall gameplay was consistently fun and enjoyable and it mostly accomplished what it set out to do – make the gamer feel like Spider-Man. If you can look past the freshman attempt at telling a good story, and have the patience for repeated loading screens, you may enjoy what the game has to offer.