The Game Itself
2.5 Stars
The Video: Sizing Up the Picture
3.5 Stars
The Audio: Rating the Sound
4 Stars
Replay Factor
3 Stars
Bonus Content
2.5 Stars
Bottom Line
Worth a Look

Clementine continues her descent or rise, depending on what kind of Clementine she is to you, in episode three of season two, 'In Harm's Way.' Though the gameplay has suffered a bit since the conclusion of season one, the story has remained strong, honing in on a young hero instead of a protective one in Lee. Many questions remain, but only one really matters. Can she survive?

I rarely do this, but before I get into things I want to talk about the process of reviewing an episode of 'The Walking Dead.' Trust me, it's relevant.

You play through an episode, anywhere from 90 minutes to two hours long, and you primarily evaluate two things: the content of the story, whether it's worthwhile in some way or another, and the gameplay that gets you to the writing. Most games are the other way around. It's the writing that serves the gameplay, which I find more appropriate for something that's supposed to be interactive. But 'The Walking Dead' as a game is special, for which it was rightfully praised during and after its first season. What made it special was by delivering the characters' experience through excellent writing and carefully orchestrated gameplay, a balance that overcomes the game's comparative lack of gameplay when set against platformers, FPSs, and third-person action staples of modern gaming. The Walking Dead rightfully stands in a different arena, and fairly should be looked at in a different way.

I did that for the first two episodes of season 2, which felt more like looking the other way than looking the right way. Episode three, 'In Harms Way,' has culminated from this season's disturbing trend from video game to interactive TV series, and it bugs the absolute crap out of me. Worse still, it's boring. Upon completing the episode, witnessing some horrible, zombie-influenced events, I came to the equally horrifying realization that I had barely played this so-called "game." 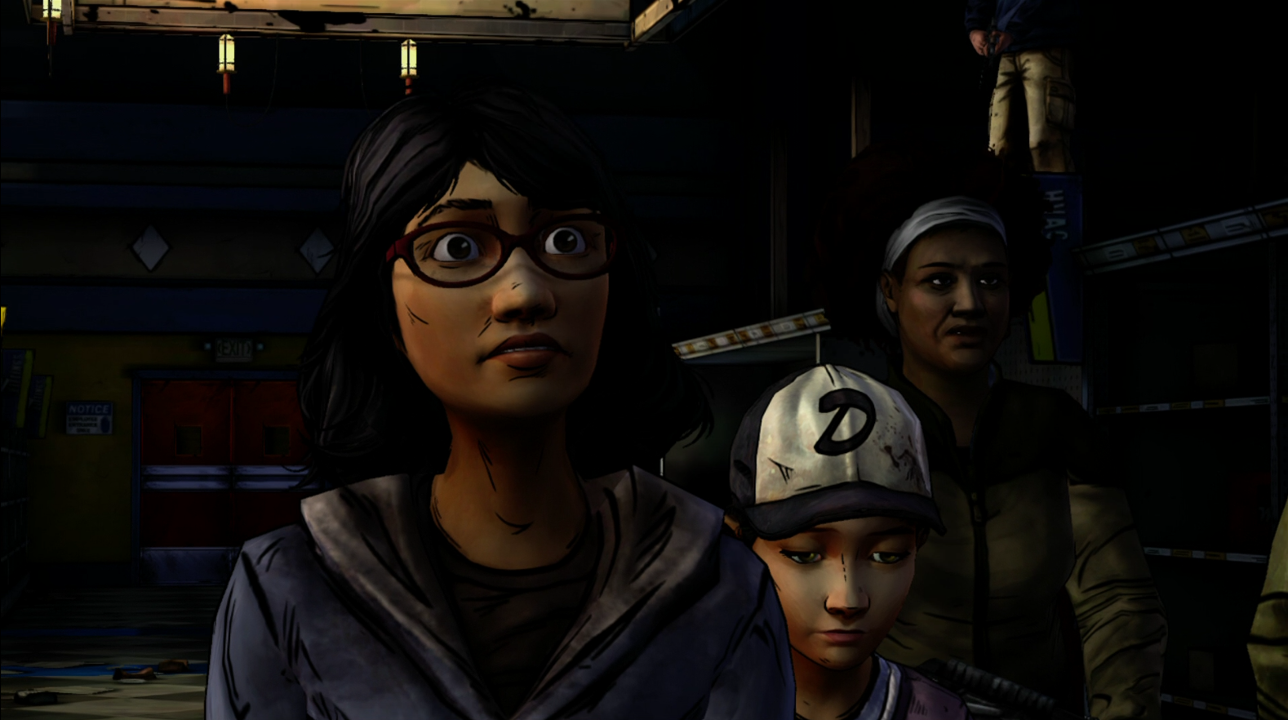 The vast majority of button presses over the course of 'In Harm's Way' are dialogue choices, and the vast majority of what you see on screen is under control of the game, not the players. Sadly, of those few-and-far-between scenes where Clementine truly is under your control, the preceding are undeniably linear and, from a gameplay perspective, riotously uncreative. One zombie attack follows the blatantly predictable route of tumbling Clementine under a pair of chompers, saved by her wildly exaggerated child strength. The few times you're guiding Clementine through an open space, interactive points in the area are both few and straightforward.

Every episode of the first season was littered with moments, small and large, that connected you to the world and, more importantly, the motivations and feelings of the characters around you. As Lee you actively survived, influenced and wrestled with your environment. As Clementine, especially in 'In Harm's Way,' you watch it happen before you and follow the orders of the surprisingly inadequate adults. Games, especially in this case, rise above the limitations of show and tell in writing. As a character in whatever story you're playing, you're doing the showing and you're doing the telling. 'In Harm's Way' strips all that away.

If you want to make the argument that it's some sort of metaphor for Clementine's coming of age, fine, but the result is the same. It's a bad sign when my most surprising surprise comes in the form of the game actually asking me to do something, and not the content of the story itself. 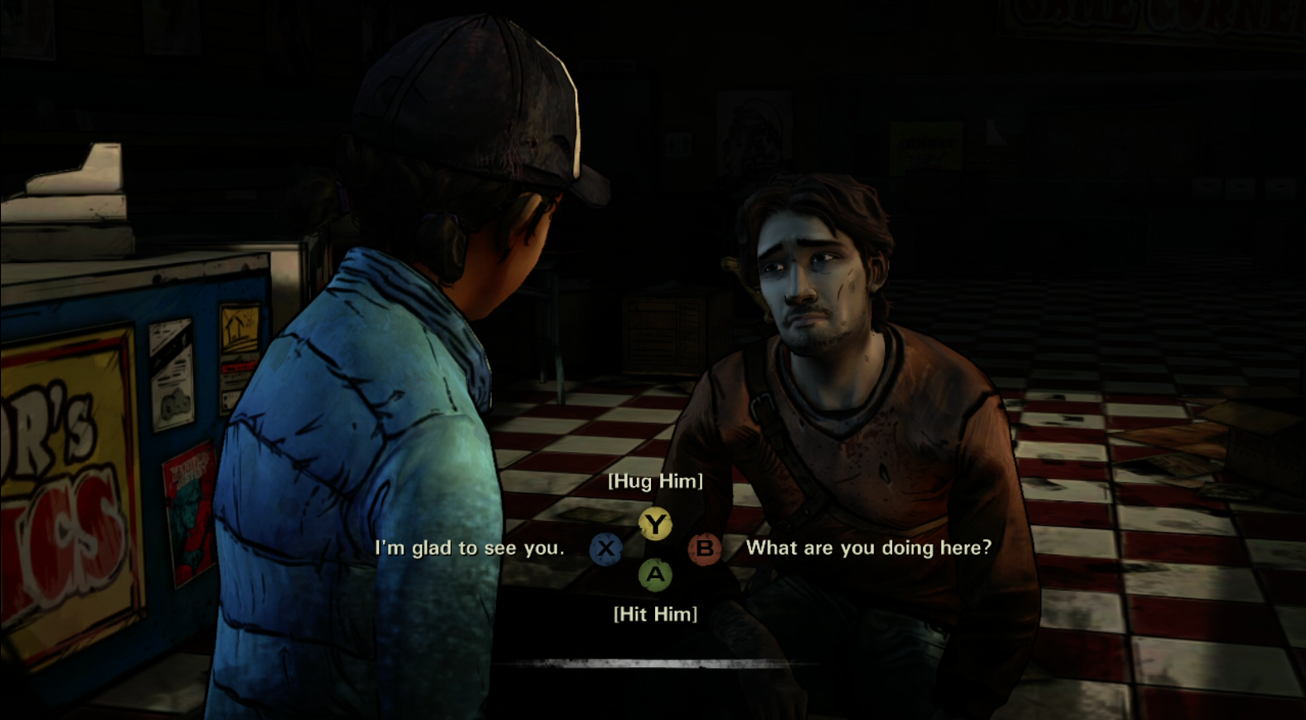 Telltale almost seems to resent 'The Walking Dead's' existence as a game rather than a TV show, but that's probably a paranoia I've developed as I slowly watch a series once daring and innovative turn into an experiment gone sour. In any case, the trend might suggest there's some sort of writing genius stuffed away in the Telltale offices, demanding that he be given the creative freedom to do whatever the hell he wants. Maybe that's a poor theory too, but it's a pretty sweet segue into my next point:. The plot and the writing is ho-hum, an almost literal shadow of the series' former glory.

It starts with the group, recently captured and being carted back to some nefarious community, coming up with a plan for escape. They fail. The rest of the episode is spent coming up with plans, Clementine always the one in the most danger, and scheming on how to survive under the tyranny of this season's lurking villain, Carver. He's tagged as this charismatic, controlling psychopath, but it ends up his super clever way of controlling the group is by killing and punching at the every whim of his grudges. He scares the lving shit out of people, which makes everyone around him hate him, except the one other asshole that nobody liked even before the zombie apocalypse.

Carver is just an asshole who spews Bible-like diatribes about sheep, shepherds and all those other fun rationalizations for acting as a terrible leader. We even get a "You're more like me than you know," moment between he and Clementine, as he remarks on the young girl's astounding survival instinct. As the one theme carrying this whole season, Clementine's growth is still the most compelling part of the show, er, game. Despite her static surroundings this time around (most scenes take place in the holding-cell area of the community), she's still a magnetic little girl becoming a magnetic survivor.

But 'In Harm's Way' envelopes Clementine in old ideas. The community mirrors Crawford from episode four of the first season, a survival of the fittest joint, just as a new female character follows in similar footsteps to the zombie-savy, loner-type Molly in the same episode. Most characters, like the belligerent Kenny or indecisive, pregnant Rebecca, are following exactly the paths we expect them to. The one difference is Carver, who in my estimation did very little other than to aggravate the story in the same exact way that a group of flesh-eating zombies already has. 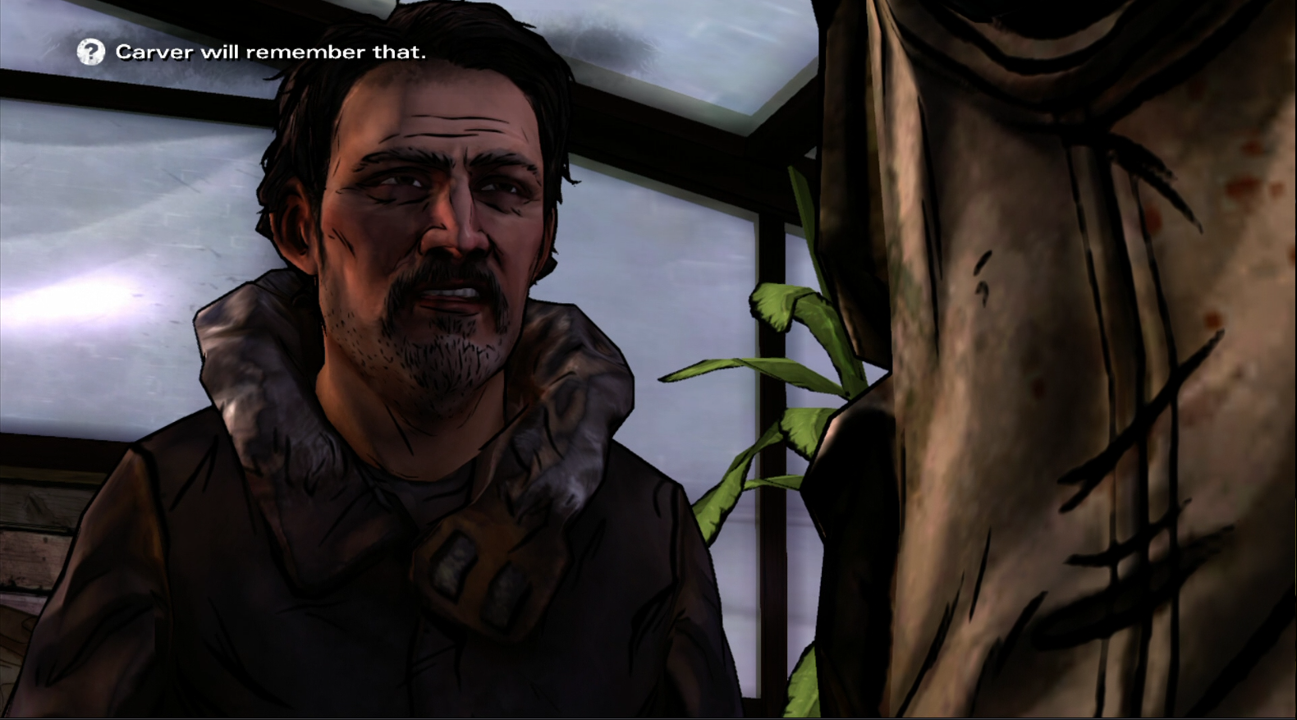 Clementine's relationship with the only other young recurring character, Sarah, resulted in the one interesting choice, whether or not to pick up her slack in a certain situation, as it caused me to evaluate my own feelings on the worthiness of weak people. I'm hoping Sarah's naivety continues to challenge Clementine, as that same thing continues to challenge me. 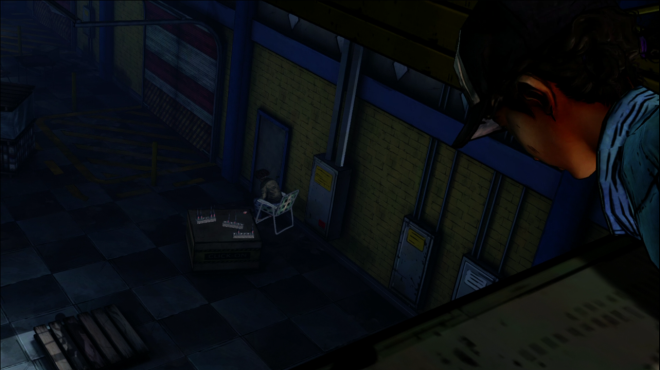 The past two episodes suffered from incessant darkness, but this time around it seems that issue's been fixed. Despite the dark tone and frequency of nighttime scenes, I never had any trouble making out the environment. That's a comforting improvement over the invisible labyrinth of the first episode's cabin.

Michael Madsen grants Carver the only sliver of legitimacy the character has as a villain, which says a lot considering how flat and one-note the dialogue could be. Where a sociopath instills fear, a gravely-toned sociopath exploits it, and Madsen pretty much nails it

As usual, the music is a faint current, but effective when the moment calls.

Story altering-decisions make 'The Walking Dead' the most replayable story in history. Still, coming onto the third episode now, restarting means going back all the way to the beginning. You'll have to wait until the season's finished before logically doing that.

Telltale updated the core code to let viewers see their past decisions. It's a nice feature that serves as a reminder of your current progress. 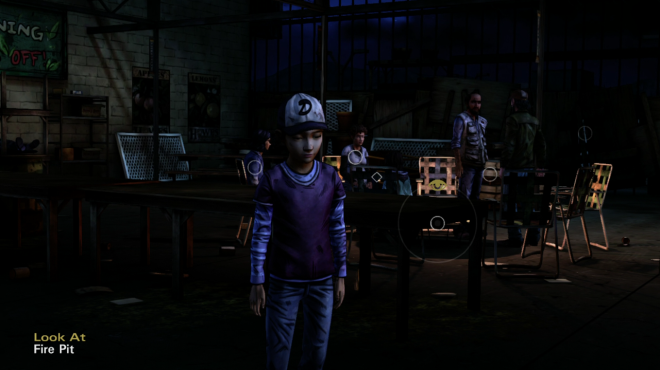 I don't need to be a passive viewer of any more zombie stories, especially in 'The Walking Dead' universe. The proof is in this episode's finale, which I conveniently forgot to mention until now. It's a brilliant scene, something I won't spoil, but it's brilliant because I was a part of it. Everything else uncomfortably unnerved me, I was watching a TV show with a dialogue wheel. I never touched the story, and so the story rarely touched me. That's the cost of promising a video game and delivering a script.

But, even still, some moments were undeniably effective.

Some decisions still feel like they matter, and despite the shortcomings of the plotting and 'In Harm's Way's' underwhelming villain, the writing is still compelling as you watch Clementine weave through zombies and people alike, grasping her own growth as a survivor in a survivor's world. I just wish there was some gameplay to stitch her story together, which is kind of the point, isn't it?