Digital Xbox One version reviewed. The review is light on spoilers.

'Batman: Arkham Knight' is the final title in Rocksteady’s critically acclaimed Batman trilogy ('Origins' was developed by Warner Brothers Montreal). It has been in development since at least 2012, and is available only for eighth-generation consoles and PC.

'Arkham Knight' takes place some time after 'Arkham City'. Crime in Gotham has subsided to a dull roar after the Joker’s demise, as the big crime lords like Two-Face and the Penguin seemed to have faded away. This was all a ruse of course, and as the game begins, a chemical terror attack instigated by Scarecrow drives most people out of Gotham, leaving only criminals and Batman behind to fight for the city’s future. Batman soon learns that Scarecrow is working with other supervillains, including a mysterious figure called the Arkham Knight who is very angry with him.

At first blush, the game feels much like any 'Arkham'. Batman uses his signature utility belt and collection of gadgets to fight henchmen, solve crimes, and traverse the open world of Gotham. I quickly discovered that Batman and all of his abilities have been given a shot of steroids. Combat, stealth, and movement are much more powerful. Batman has always been rather violent, what with all of his bone-snapping and face-smashing, but now he’s downright mean. 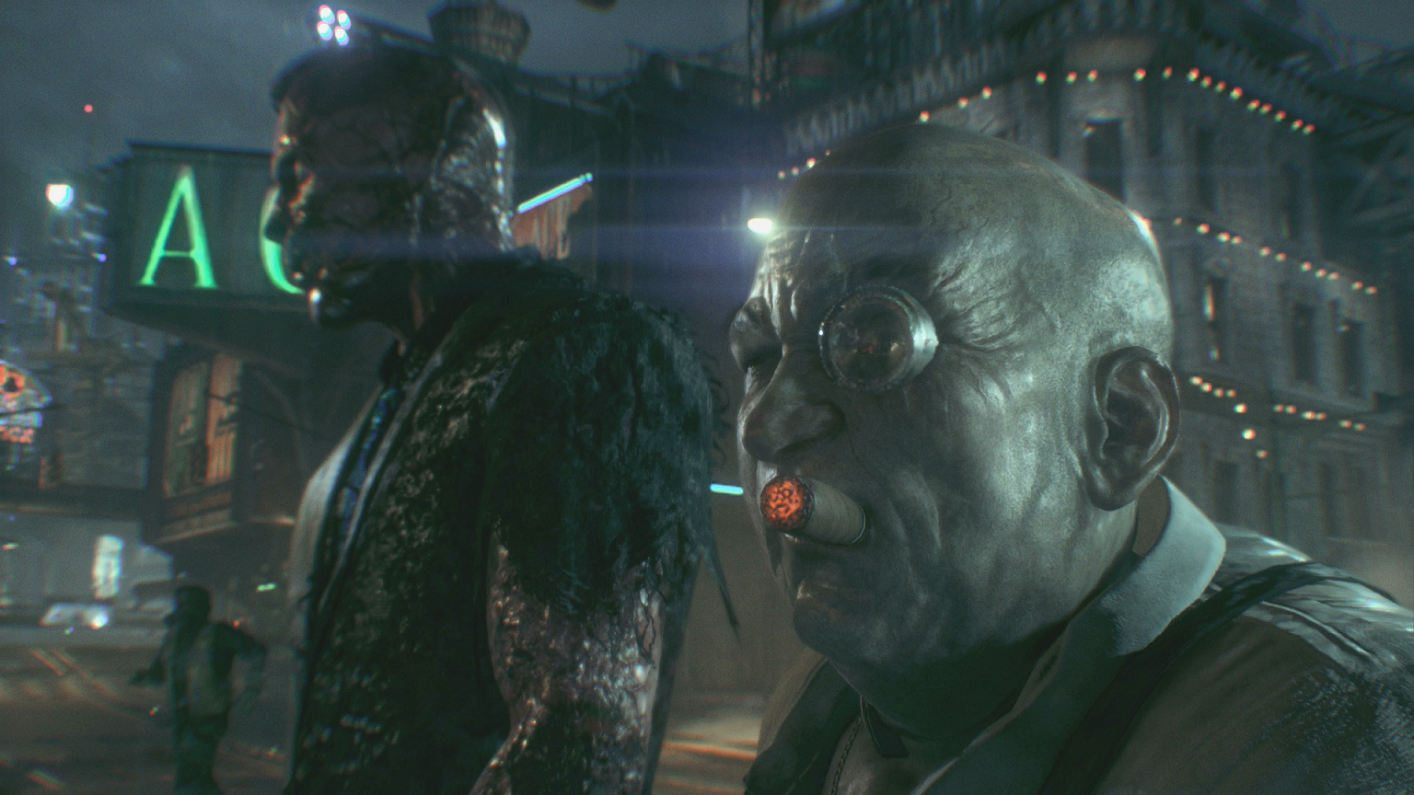 He can use melee weapons, either by picking them up off the ground or stealing them from enemies. He can make use of the environment to incapacitate foes a la 'Sleeping Dogs', slamming their heads into fuse boxes or dropping light fixtures onto them. Sidekicks from the Bat family, like Robin, Nightwing, and even Catwoman show up in combat to assist him. When in the game’s stealthy Predator mode, the Bat can dispatch enemies in rapid succession via slow-mo "fear takedowns". These new moves are empowering and delightful but do make the game easier - playing on Hard is recommended for any kind of challenge.

And then of course there is the Batmobile. I tried to keep my preconceived notions in check, hoping that Rocksteady’s firm insistence on the iconic tank/car would pay off and result in either a great addition to the gameplay or an optional gimmick that could be safely ignored. What we get is not much of either, but not all hope is lost. The car is featured in many, many of the game’s story segments, where it is used for movement, combat, and even puzzles. Controlling it at first is awkward, with an orthodox drive mode and then a strafing, scorpion-like combat mode with guns and missiles and other decidedly un-Batmanlike things. As I played around with it more, it began to grow on me. Not all of the races are good, not all of the wall-crawling platforming is good, but there is fun to be had with the Batmobile. The lamer moments, like sliding around while blowing up unmanned tank drones, are offset by genuinely cool ones, like when I absentmindedly pressed A + X during a fistfight and the nearby Batmobile blasted a thug with its neutralizer cannon. 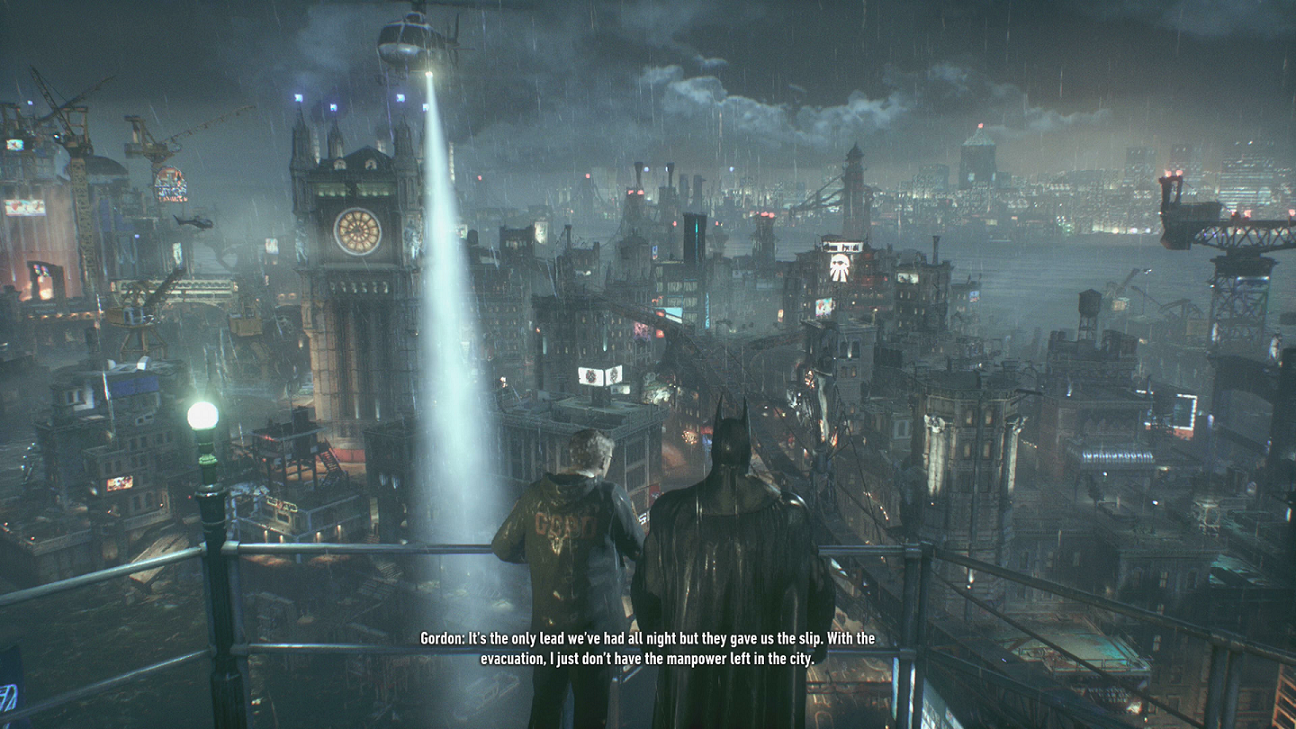 Even without as much influence from the Joker, the game’s storyline is darker and more graphic than previous entries. It reminded me of Frank Miller’s take on the comic series with his 'Dark Knight' run, which also influenced the recent films. Batman himself is monolithic. His emotionless facade cracks very rarely, such as when visiting Talia’s section in the GCPD evidence room, or when Robin calls up to offer his assistance in Gotham, which is very risky for the young crime fighter. The matchup of Scarecrow and the Arkham Knight is questionable, but Scarecrow himself gives a sinister performance, much deeper than the boilerplate appearance he had in 'Arkham Asylum'. Other parts of the plot are surprising and delicious - I will keep them a secret, but suffice to say that things are not looking good for our hero. While the overall narrative is good, the script has some issues. There are hammy, melodramatic bits that squander the excellent voice acting. I don’t include the Riddler, who is supposed to be hammy. 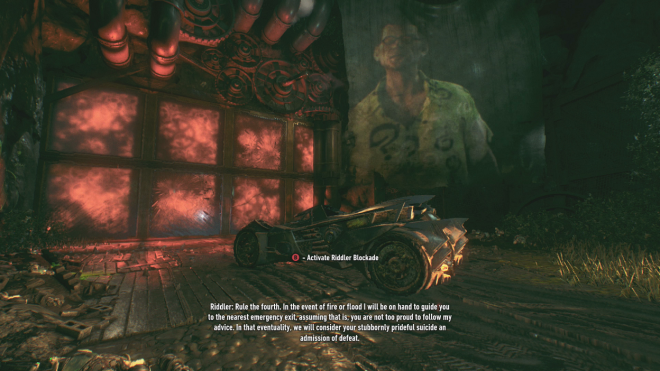 There are many recognizable assets here from earlier games (notably in animations - Batman is still using combat moves from 2009), but overall this looks like what I would expect from an eighth-gen game. The environment is chock full of things that the 360 wouldn’t be able to render all at once, making for a denser, richer city. Well, rich in a Gotham way - it is a filthy place, covered with graffiti, grime, and opportunistic criminals who busy themselves with rioting and looting. Textures are sharp, lighting is realistic, and unlike the PC version, there are few bugs. The only time the framerate chops is during super-fast Batmobile moments, and it's mild. One issue of note is the rain, which is seemingly endless and just makes everything look kind of gray instead of wet. 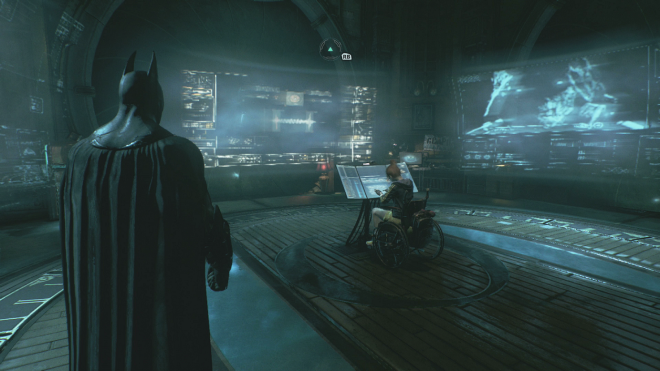 The cast is large and has a mix of returning Batman actors (Kevin Conroy as Batman, Martin Jarvis as Alfred, and Mark Hamill again as the Joker - the guy just cannot retire), film actors new to games ('Twilight's' Ashley Green as Oracle, 'Breaking Bad’s' Jonathan Banks as Jim Gordon), and prolific gaming actors (Nolan North as Penguin, Tara Strong as Harley, etc.). Almost all of the voice acting is terrific. Composer Nick Arundel returns from other 'Arkham' games and similarly does great work with the score. The Batmobile, despite its hot-and-cold performance, does sound really cool.

Gotham City is quite large, but the combination of the Batmobile and the new gliding mechanics make it seem much smaller. As usual, the Riddler’s riddles are everywhere, and some of them now take the form of odd races which include light puzzle and platforming elements. Not all of the side content is fun - some of it is typical open world filler. Still, I whiled away many hours in the streets just chasing down leads, collecting trophies, and beating up smart-mouthed punks. After completing the game, a new game plus mode is available, with the player's level progress carrying over. There is also a large challenge mode that can be accessed from the main menu. 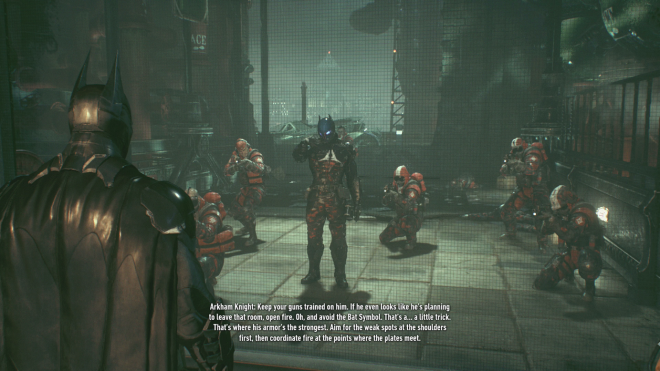 I would not go so far as to say that 'Batman: Arkham Knight' is the best 'Arkham', but it's pretty close. The Batmobile is not without its flaws, and there are some mild complaints with the script and the side content, but this is still one of the best superhero games to date. Rocksteady’s Batman swan song is a treat.