Steam PC version reviewed. Only the keyboard controls were used.

'Not A Hero' is the evolution of the flash game 'Ur Not A Hero' by Roll7 founder John Ribbins. It borrows elements from several of Ribbins’ other games as well, like 'Hackathor' and 'Jeffrey Archer'.

In 'Not A Hero', an anthropomorphic rabbit has traveled back through time to save the world (not like 'Donnie Darko', exactly). Bunnyman is an accomplished politician who must be elected as mayor to avert a global calamity. He does this in spectacularly violent fashion, sending armed thugs to wipe out buildings full of other thugs and complete politically corrupt objectives. The Bunnyman himself doesn’t do any shooting, but is not above acting as a getaway driver.

The game is presented in a 2.5D fashion, which is all the rage these days. Bunnyman’s henchman is typically dropped onto the roof of a building, and then rampages through the halls of that building and several nearby ones, jumping haphazardly between balconies and creating bright red pools of pixel blood whenever he encounters an enemy. The game is technically a cover-based shooter, and is a great example of the high difficulty, try-and-die twitch titles popular in the indie scene. It is not unlike 'Hotline Miami', another bloody twitch shooter, although the camera perspective and humor differ. 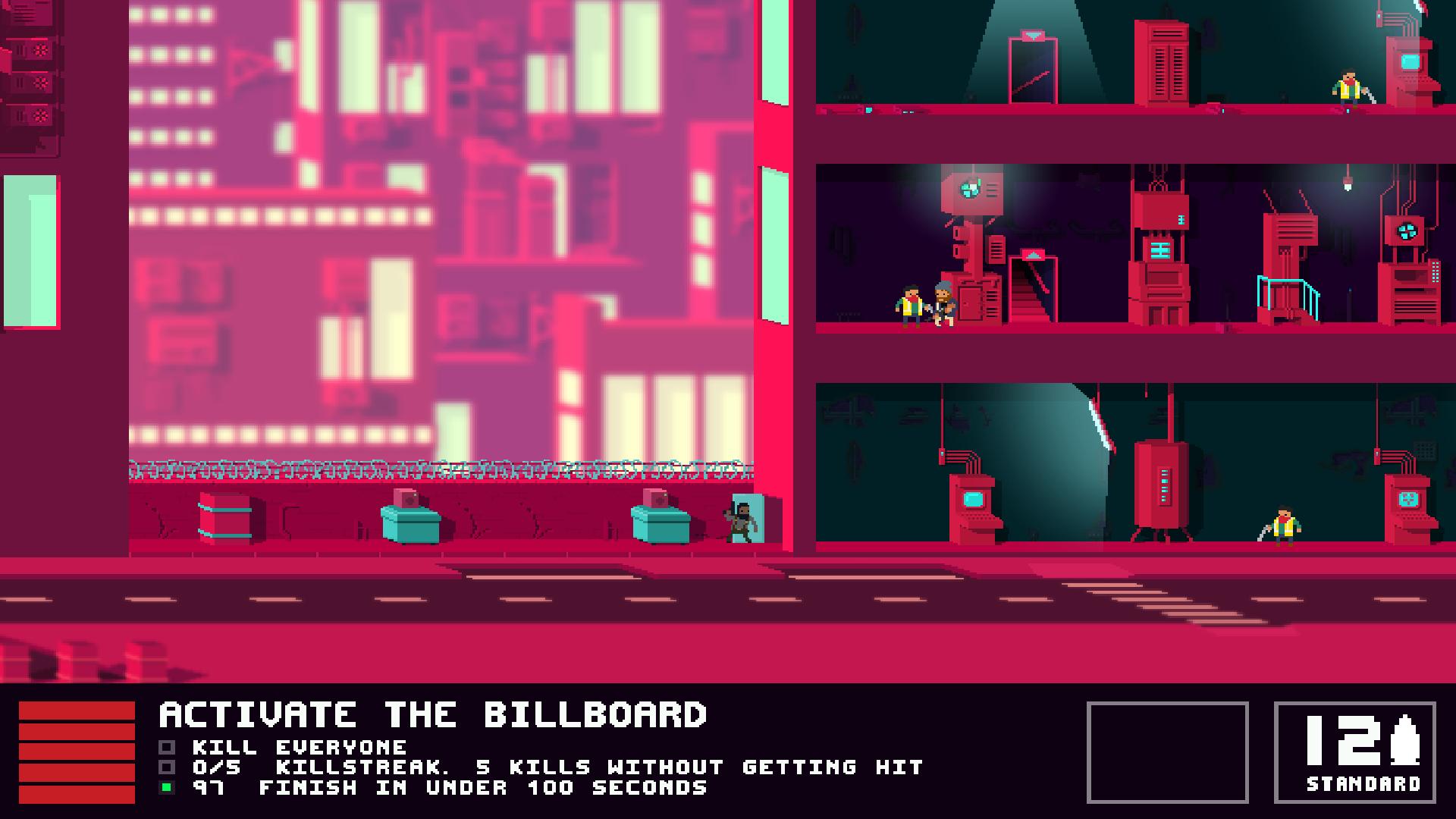 In true arcade style, the player character can retrieve power-ups from the levels and dispatched enemies. Some of these are wacky gun upgrades with limited ammunition, like laser beams and superball bullets. Others are grenades or molotovs. The action is explosive, fast-paced, and relentless. Enemies ran at me from all sides, hoping to flush me out from cover and whittle down my five measly (but regenerating) health bars. Some were content to stay in cover and take occasional potshots, while others would run right at me, even when I was using the shotgun-wielding thug. 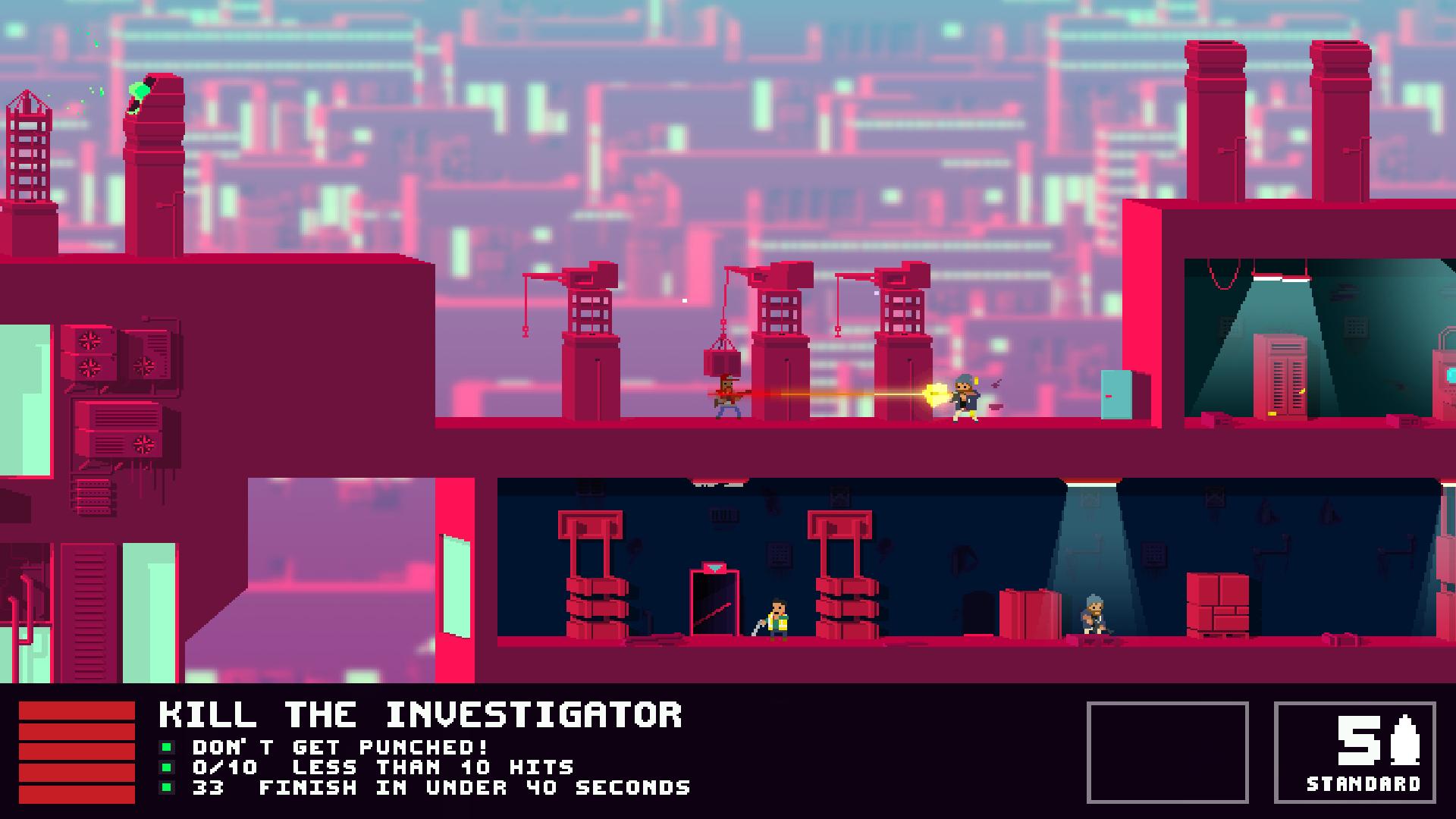 Bookending the very short action levels are odd little cutscenes where Bunnyman compliments the player on their performance and presents a briefing on the next mission. These are sometimes funny and usually surreally confusing. Bunnyman is a strange creature, with dialogue that alternates between decent political satire and bewildering non sequiturs. The game on the whole has a very light, almost playful demeanor. 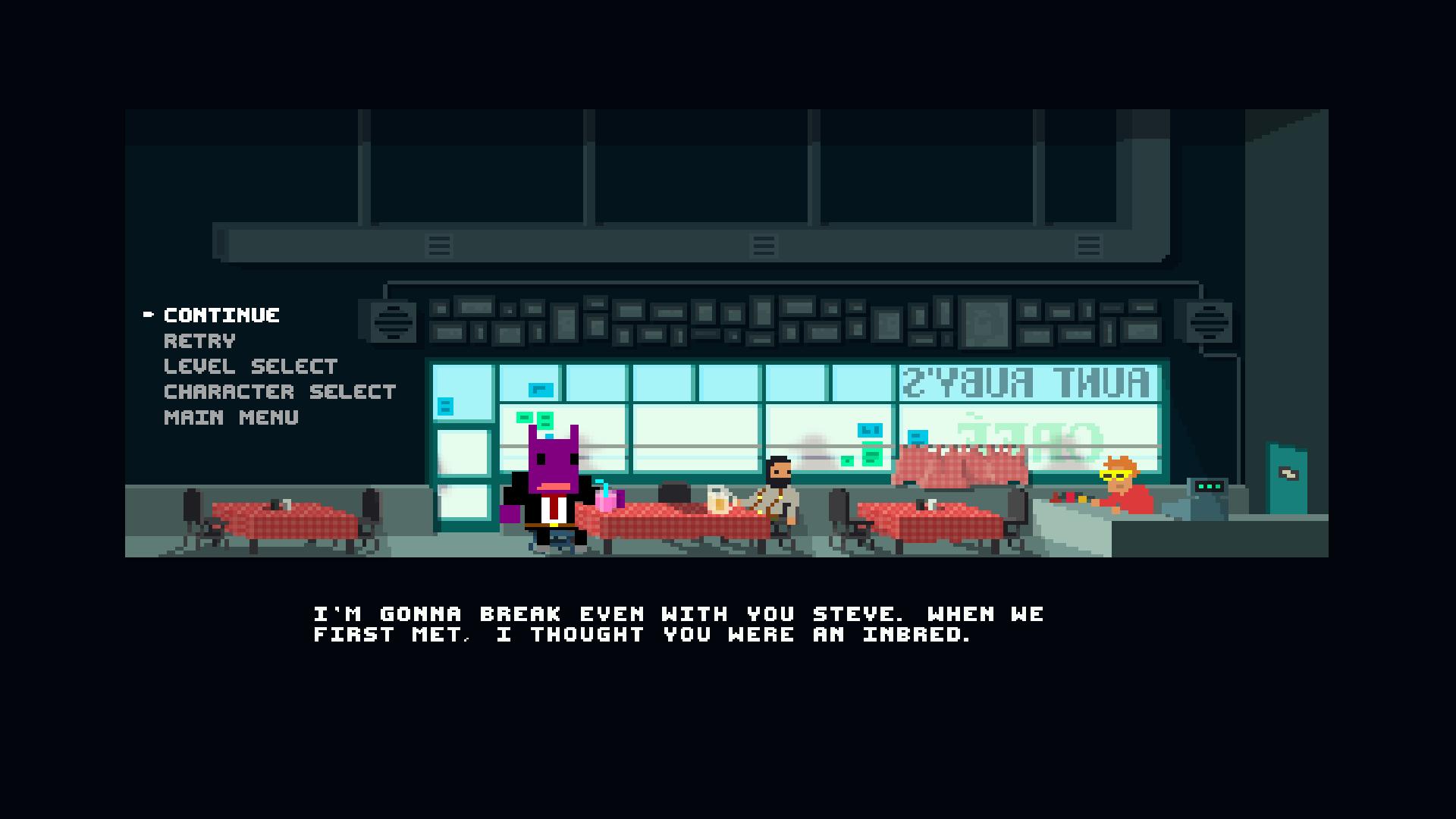 My chief complaint is with the controls. The mouse goes unused; the character is controlled with the arrow buttons and just a few other preset keys. This can lead to avoidable errors and frustration when things start to become heavy during each level. A mouse option would have been nice, or any kind of remapping feature really. Because each level is so short, I usually didn’t mind dying a lot, as little progress is lost and it’s quite to fun to engage in heated pixel fights. 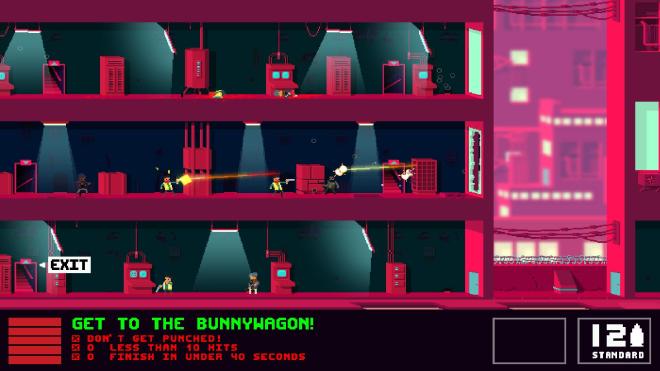 'Not A Hero' is reminiscent of 8-bit arcade and console titles from a bygone era, but that’s not to say that it looks bad. A retro pinkish-red color scheme underscores the more modern visual effects created by gun flashes, explosions, and spraying effluvia. There is a comic element to the violence as well that is not unwelcome. Gameplay is extremely fast and never clips or stutters. 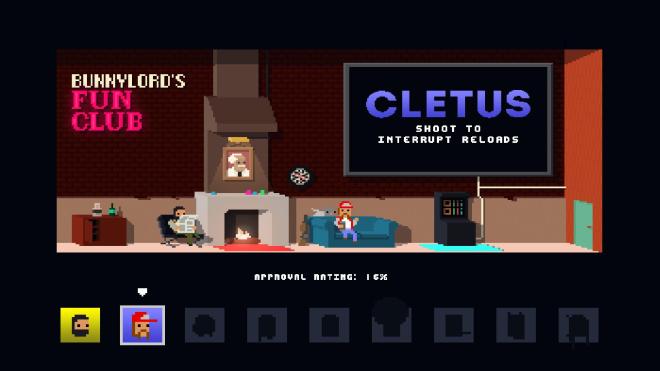 Like the video, the audio has a classic feel. Tinny audio effects punctuate every exchange. Slightly distorted midis play in the background. The Bunnyman has a nondescript voice that sounds like adults in the 'Peanuts' cartoon. The other characters are voiced, however, and they are quite hilarious. Comedian Damien Slash does many of the British accents to great effect, such as heckling the player when they make mistakes.

'Not A Hero' has a short length (not a bad problem to have, because it usually means I want more), but there is some strength in its replay. The missions are very short and many feature different routes. Each level has a few optional objectives to be completed, and higher approval ratings means access to more characters, each with different weapons and abilities. 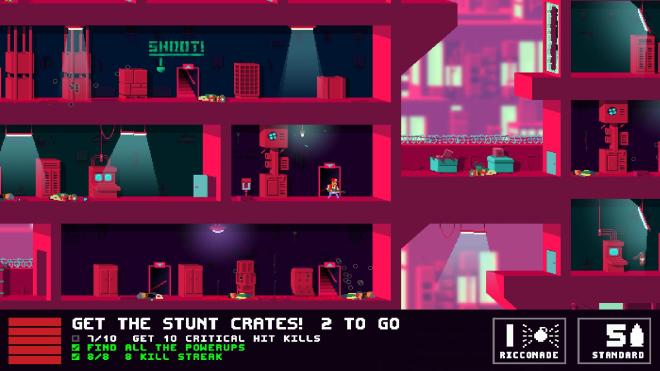 'Not A Hero' is a tough, repetitive, and older-looking game, and it is also quite a bit of fun. The levels can get grating after attempting them for the dozenth or more try, especially because defeat can happen at any time (including right before a victory). But, the push to complete it perfectly, with a shorter time, or by completing more objectives, brings its own appeal. The campaign can be completed in just a few hours, but it’s a worthwhile experience for fans of brutal, energetic indies.