SteamWorld Dig: A Fistful of Dirt

3DS version reviewed. 'SteamWorld Dig' is also available on the PS4, Vita, and PC. Features are shared across versions, with the 3DS version maintaining the games original visuals.

Developer Image & Form, young and ambitious, graced the 3DS and PC last year with 'SteamWorld Dig: A Fistful of Dirt.' Described as a platform mining adventure by the company, you take the role of Rusty, a steambot miner with a knack for uncovering mysteries in his uncle's old mine. Though many titles in the past have exploited the very basic addiction of digging into unknown depths, 'SteamWorld Dig' throws in a light story and character progression, along with some charming visuals, to carve out its own spot on the landscape. The PS4 and Vita ports have recently been released, which makes now a perfect time to reexamine the game.

You put two things together and you can expect either conflict or cohesion. A jumping, digging Steampunk robot named Rusty is sent to claim an entire ore mine at the will of his mysterious uncle. And so he digs. 'SteamWorld Dig: A Fistful of Dirt' is a combination of many things. It's an adventure game inside of an exploration game, or the other way around, and it's a two-dimensional platformer with light-but-meaningful character progression. If not in scope, the game is ambitious in finding directness in a multitude of variant game mechanics. It's satisfying and succinct. In all the small things it does, 'SteamWorld Dig' is a wonderfully cohesive title. 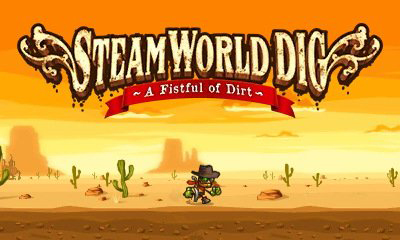 Or, to put it plainly, virtual digging has never felt so right. Equipped only with a lantern and a pickaxe at the start of the game, you're essentially just trying to go as far down as possible. As the lantern closes in on complete darkness, you need to make your way back up to refuel, but always through the path you've carved for yourself in this persistent little world. Up and down, up and down, ever forming the environment to your own actions, a couple of things ensure the adventure is never as monotonous as the former element to this sentence might have you assume.

First off, there is a real and deliberate progression to the game. You aren't just digging around for the sake of it, you're actively looking for resources scattered in the rock. And you use those resources to further increase Rusty's strength as a digger, thus allowing him to go further down. But there exist abilities too, unlocked at the end of tightly designed platforming/puzzle areas sectored off in the randomly-generated environment, which simultaneously enable further progression while transforming Rusty from a mere tinkerer to a mining machine. These abilities are a propulsive jump, boosted steamed water strike or a powerful ranged punching attack that renders previously intimidating creatures mere prey. They aren't arbitrary numbers or stat boosts. They're actionable, tactile enhancements which lead you to feel your time spent in the dark has actually been worth it. 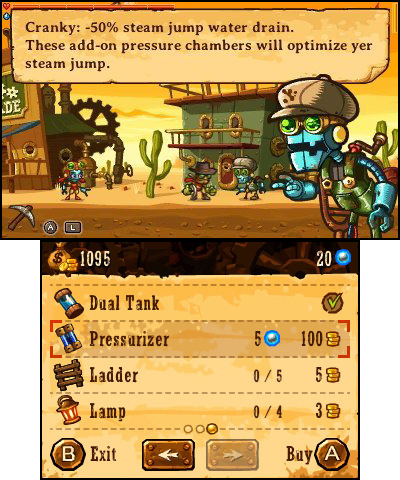 That alone, in a AAA industry plagued by floating damage numbers and petty, tedious role-playing advancement, is undeniably fresh. It works, though, because the process is just as satisfying. Rusty's axe hits and crushes the dirt with a satisfying ping, and later on so does the drill cry destruction. And getting back up is a challenge you've created for yourself, tackled with finely-tuned wall-jumping mechanics, which in turn affects how you go down. It's a strangely compelling dynamic, a rare opportunity among the virtual realities to literally carve your own fate.

That isn't to say something like that hasn't been done before. But, and this is a very important but (maybe the most important), 'SteamWorld Dig' isn't actually a digging game. It's an adventure game with digging inside it. The environment, though randomly generated, is always funneling you to the next objective and, eventually, an actual conclusion. For a gamer tied up in traditional narrative and gameplay styles, moreso commonly put off by the recent trend of open-endedness in such popular titles as 'Terraria' and, oh yeah, 'Minecraft,' 'SteamWorld Dig' is a perfect way to discover what all the hype is about. There's no pressure to motivate yourself. The game does it for you. And it ends. Contrary to the hip way of thinking, that's a good thing.

It feels like a story that's both yours and Rusty's, as opposed to a vacant world where you need to make the effort. Sometimes the latter is conducive to an emergence of compelling gameplay, but here it's the specialized directness of these open-world mechanics that create a satisfyingly linear experience.

Or, to put it plainly, there actually came a point where I felt satisfied with all the progression I had made. I wanted to do it all over again.

In adopting a steampunk western theme to the visuals and presentation, Image & Form basically circumvented the need for any truly creative visuals from a tonal or atmospheric standpoint. It's pleasant and, more importantly, pragmatic. Up on the surface, the town of Tumbleton slowly builds into a bustling little marketplace where Rusty can spend his cash. The characters at the helm of each store are compelling in the way one insect stands out from another. There's not a lot going on inside, but they look the part and they play the part very well.

Inside the mine it's a very different story. Dark and mysterious, the beacons of light scattered throughout the dirt almost pull you in, fighting your desire to stray and find doubtless glorious goods scattered about. It plays well into the whole lantern mechanic too, beckoning a balance of time and miner's ambition. Again, very pragmatic and not too overwhelming.

The music and accompanying rhythmic sounds of Rusty's various tools play you through the mine like a "whistle while you work"/western hybrid. As with the presentation, it's a pragmatic sense of progression and mystery in the score, and an efficiency in the sound design that doesn't scream creativity but goes a long way towards cementing the atmosphere. You're pushed forward without any overbearing tick compelling you to turn the volume down.

Generally games this short, at around four to six hours, are about some sort of vital emotional experience. Or it's a puzzle game, both of which have the replay value of a stick of gum. 'SteamWorld Dig' is neither, of course, and exists with the unique prospect of being a different game the second time around. The entire mine is rebuilt with random ore placement and ability-unlock locations, which in turn changes the path you build through it as you go. Again, when compared to AAA titles that beg replayability through character progression or scoreboards, the very prospect of replaying a game in such a unique fashion is enticing in itself. It's an inexpensive game that runs over and over again. Check yet another nonexistent box for 'SteamWorld Dig.'

Adventuring through a mine sounds like a one note sort of deal. It could have been, but then I imagine Image & Form never would have attempted the project in the first place. They saw a potentially monotonous act and employed a variety of key mechanics to make it fun and truly satisfying from beginning to start. Somehow tightly linear while feeling open and unique to each and every player, a day in Rusty's metallic shoes is never the same as the last and always worth another trip down into the dark.