The Game Itself
1.5 Stars
The Video: Sizing Up the Picture
1.5 Stars
The Audio: Rating the Sound
1 Stars
Replay Factor
1 Stars
Bottom Line
Skip It

Unlike its last generation competitor, the Xbox 360 never really got a fair break when it came to laying claim to its own top-notch baseball themed game. The annual entry from the 2K series was generally mediocre at best and 'The Bigs' was an interesting diversion more akin to 'NBA Jam' or 'NFL Blitz.' Left with nothing coming close to matching Sony's 'The Show' franchise, the last possible chance at an enjoyable baseball game comes with the revival of a game franchise dead for nearly two decades. Originally released in the mid-80s on the NES, 'R.B.I. Baseball' was the first major MLBA licensed game offering; a product of its time, the game boasted quick, simple action that came far from replicating all the intricacies America's pastime, but still managed to be a load of fun. The franchise would see several sequels ending with the Sega CD offering in 1995, before being resurrected as the multi-platform downloadable title, 'R.B.I. Baseball 14.' The new game has been put together by MLB Advanced Media, and so, in theory caries within it the DNA of the league. And so, like with a long-suffering fan of a cellar-dwelling club on opening day, it's not without some trepidation that 'R.B.I. Baseball 14' arrives on the 360.

From a strict gameplay experience, I'll be as painfully blunt as possible: 'R.B.I. Baseball 14' feels like an NES game, if not worse. The controls are simple, press a button to pitch (you can alter the pitch with the directional or analog stick, although there's no in-game support to make this clear), press a button to swing, press a button + direction to throw to a base. 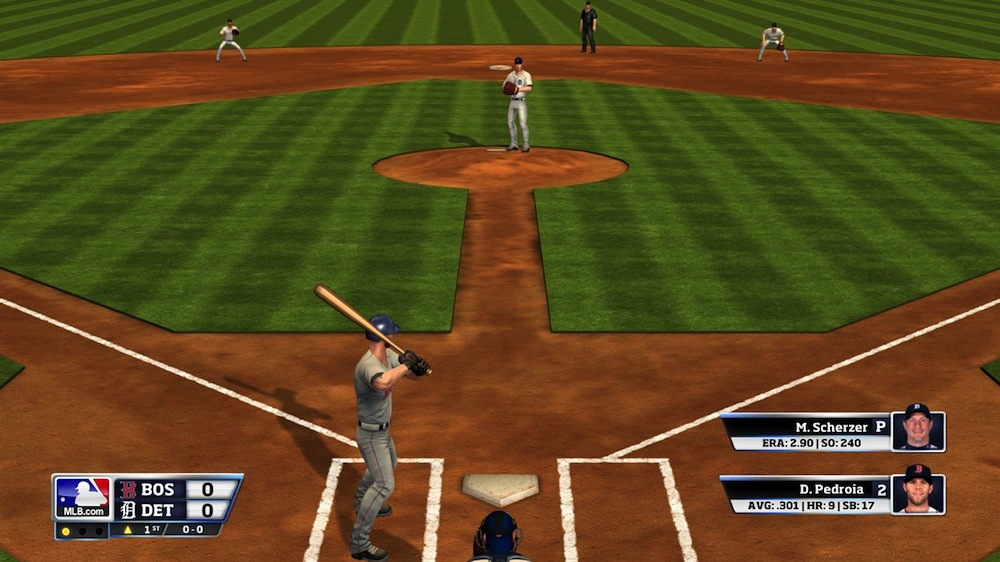 That's the general gist of the game; you can also move your fielders (as well as try to throw out runners and steal bases), although the control is so sluggish and often inconsistent, I'd recommend for your first few games, using the 'assisted' fielding system. One would think with such a basic approach to control, things would go incredibly smoothly. That's not the case and more often than not, I found tiny imprecisions in the control scheme resulting in me throwing to third base instead of home, allowing an AI opponent that already feels like it's 'cheating' to score yet another run. Granted this is an arcade approach to baseball, neither I nor any other gamer should expect advanced controls, but what's offered here feels lazy and sloppy. 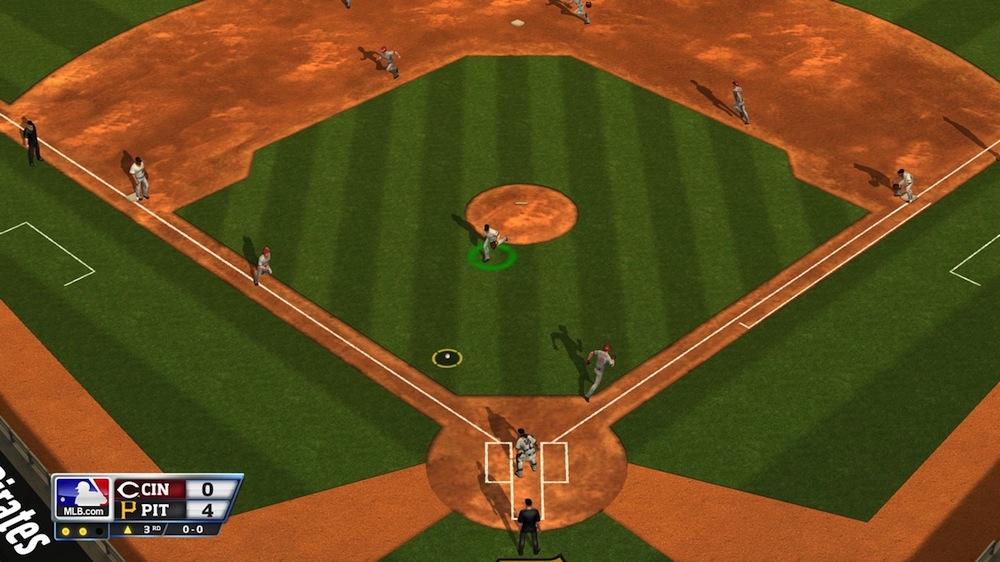 To make matters worse, unless you can wrangle up a friend for local multiplayer, your entire experience with 'R.B.I. Baseball 14' will be against the wretched AI. If you're not a perfect player, expect a lot of games to end early due to the 'mercy rule.' The game does offer a token season mode as well the ability to pick a team and skip straight to the post-season, but I can't imagine wanting to play more than one or two rounds of the game in the first place, let alone an entire MLB season. At the end of the day, the only thing the game has going for it, is the MLB license, which due to the game's visual design, feels ultimately like a waste of time and money, that could have been better utilized in adding at least a few merciful flourishes to the game (*cough*online multiplayer anyone?*cough*). 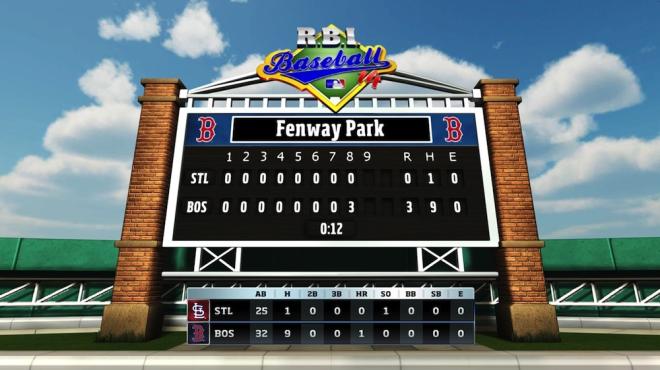 Visually, 'R.B.I. Baseball '14' is rough looking and that's being more than generous. The game doesn't look anything near last generation's graphical standards. The art direction is flat with muted colors and a handful of recycled character models. Animations are limited and while I suppose this keeps with the nostalgia aspect, at minimum, I'd expect the characters to at least look somewhat like their licensed professional counterparts (the best we get is an on-screen headshot in the corners). With such inferior graphics, the best I can say is there's zero issue with frame rate. 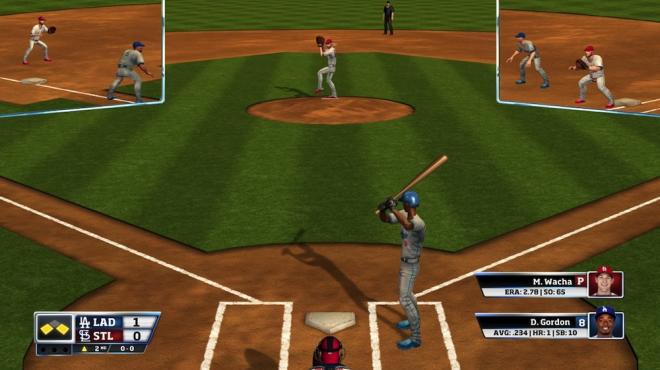 On the audio front, the game fares just as poorly. Sounds are canned and sound design, as a whole is uninspiring. There's zero play-by-play commentary, so after a good 45-seconds of playtime, I'd reckon you will have heard the complete range of the game's audio offerings.

Whether someone wants to revisit 'R.B.I. Baseball 14' after playing a few rounds is a huge mixed bag. I could easily see a gamer having shelled out $20 for a digital only title forcing him or herself to get a few hours of use (notice, I didn't say fun) out of the game, before likely deleting it from the hard drive without looking back. There's a token offering of in-game challenges for each time, all of which revolve around the season mode and reward gamers who complete them with alternate uniforms. Apart from that, the only opportunity for genuine fun is to get a friend to come over and kill some time with local multiplayer, as its only in this fashion that 'R.B.I. Baseball 14' doesn't crumble under its poorly designed backbone. 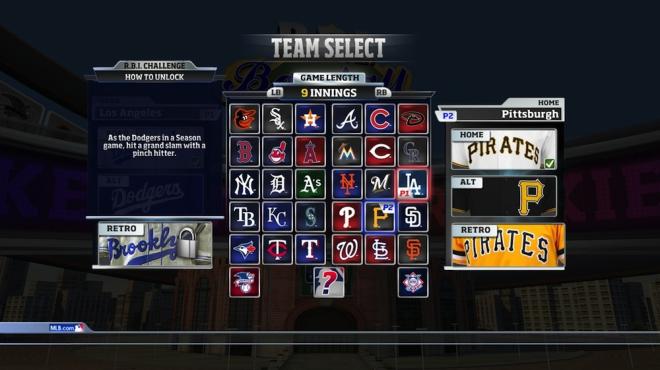 With two decades of gaming technology revitalizing numerous other franchises, the final product should have been a nostalgic throwback with just enough modern day spice to keep things fun (much akin to the recent 'NBA Jam' offerings), not the soul-crushing experience with a $20 price tag it turned out to be.

I earnestly wanted to at minimum, enjoy my time with 'R.B.I. Baseball 14,' having fond memories of its predecessors on the NES and SNES. Not being able to play against other gamers online in 2014 is frankly, a crime against gaming, especially when you're charging $20 for an ugly looking game with mediocre controls and a painfully imbalanced AI. At one-fourth the price, I'd offer a half-hearted recommendation on the basis you buy it for local multiplayer, as it stands now, I feel it's my duty to scream at the top of my lungs, stay away.