The Game Itself
3.5 Stars
The Video: Sizing Up the Picture
2.5 Stars
The Audio: Rating the Sound
4 Stars
Replay Factor
3 Stars
Bottom Line
For Fans Only

The dubiously titled 'Borderlands: The Pre-Sequel' is the latest addition to Gearbox's 'Borderlands' franchise. Like its predecessors, it is an irreverent action-comedy first-person shooter with a heavy focus on loot. It takes place on Elpis, the moon of Pandora. Like our own moon, there is no atmosphere and the gravity is significantly lower, promising a different sort of combat than the first games. This time out, 2K Australia has taken on the bulk of development duties, which should mean a fresh outlook for this "pre-sequel."

The core mechanics of any 'Borderlands' is shooting and looting. The player mows down armies of foes, they occasionally drop better loot than what they were killed with, the player equips that loot and then kills more, repeat ad nauseam. Looting is a solid mechanic if implemented well, and so far it has been implemented pretty well in the series. Unlike a more competitive looter such as 'Diablo,' 'Borderlands' has such zany weapons that I often find myself equipping new guns just to see what they do. The engine's random weapon generator can make all kinds of stuff. There are the "normal" effects like fire, corrosion, and electrification, and then there are the more exotic weapons like assault rifles that shoot bombs, revolvers with sniper scopes, talking shotguns, and much more. 'The Pre-Sequel' falls a bit short in this department, with more powerful weapons being quite rare. It's not quite as miserly as 'Destiny', but it's not the fun loot piñata of 'Diablo' either. 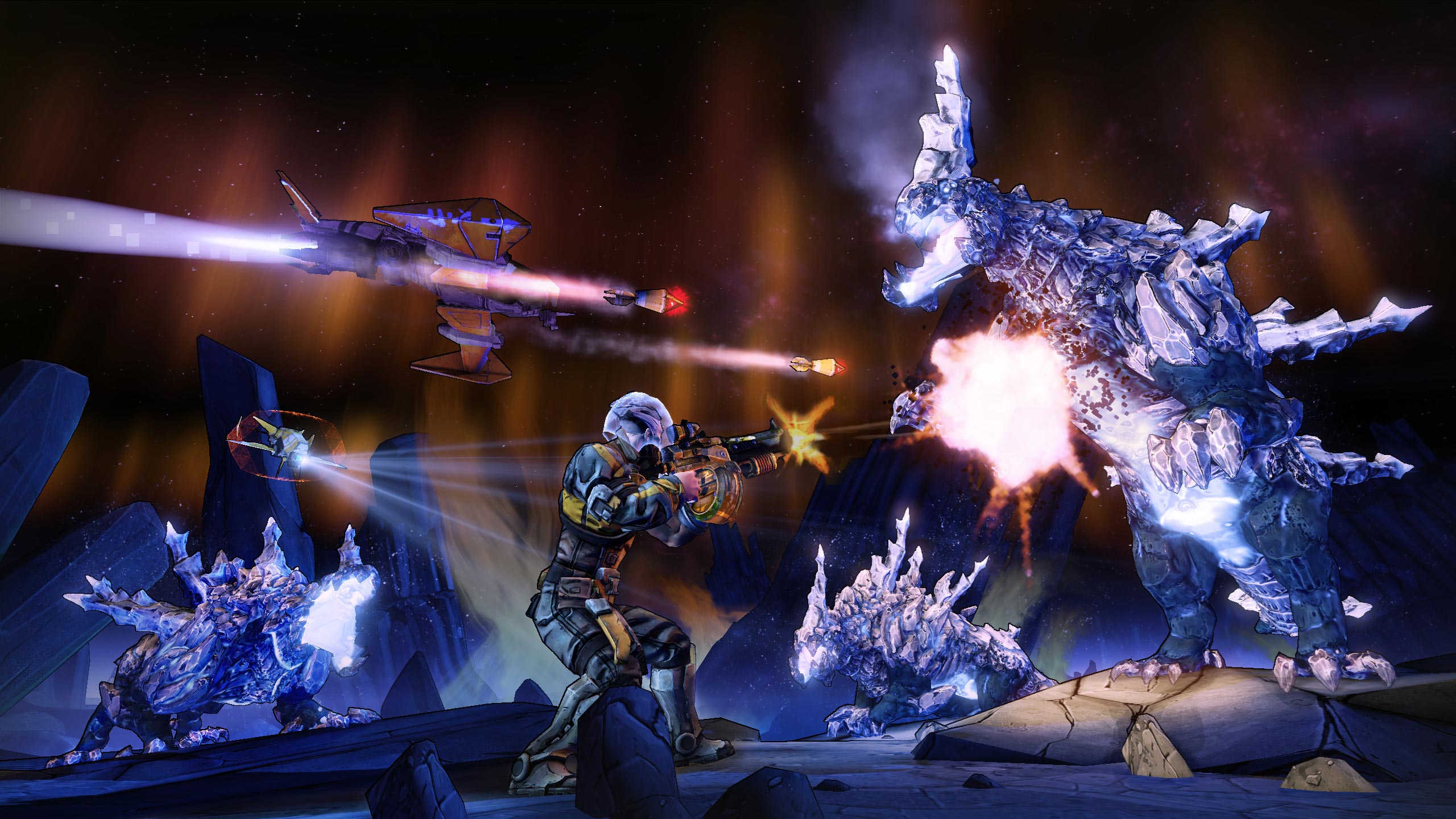 'The Pre-Sequel' adds a new weapon type and a new damage type. The weapon type is the laser, which itself comes in a few varieties, like a steady beam or a tri-beam laser shotgun. Laser weapons are always elemental, unlike conventional firearms which can be vanilla. The new damage type is freezing, which can slow down and completely stop enemies. Frozen enemies can be instantly dispatched with a melee attack. Freezing damage is a lot of fun, especially when mixed with 'The Pre-Sequel's' new "butt-stomp," which is an area melee attack that any character can perform. The lasers are implemented well and may just be my new favorite weapon type. They fit in very well with the more sci-fi feel of the game.

The game's lunar setting offers a different environment than fans will be used to. In many zones, there is no oxygen. Characters make use of a new item, an O2 or "oz" pack that allows them to breathe on the surface, double-jump and glide, and use the aforementioned butt-stomp. Human enemies also use an oz pack, which can be shot to inflict damage over time while they suffocate (very slowly). The oz pack replaces the relic item from 'Borderlands 2'. Oxygen can be replenished by collecting oz canisters from defeated enemies and standing atop oxygen vents that dot the moon's surface. The oxygen mechanics are a mostly unwelcome change. It seems a bit counterintuitive to feature an enemy in a shooter that cannot be shot, and interrupting the flow of otherwise fun combat to top up an oxygen meter is rather irritating. It also slows down exploration and looting (except for the Clap-trap, who is a robot and therefore cannot suffocate). 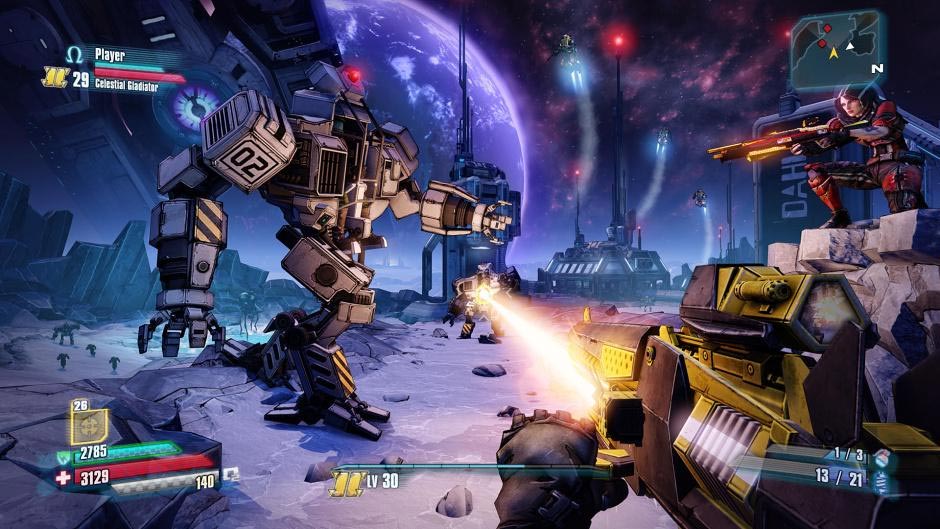 The lower gravity of the lunar surface means that many fights will have a more vertical element. Environments are liberally coated with platforms of varying heights, allowing opportunistic players to gain a height advantage against their opponents. An example of this is an early boss fight with a dastardly outlaw named Deadlift. His arena is a massive, cleverly designed circular staircase, with booster pads on each level. Between myself, Deadlift, his minions, and my allies, we were all flying around the level like hyperactive kids in a bouncy castle, trying to take down opponents before they made it to the upper levels.

Leap height is dramatic and can be further augmented with the oz packs. While out on the surface, running and jumping is a bit slow. Although enemies suffer from this same disadvantage, the slowdown in general does not make gunfights more exhilarating or fun. The butt-stomp at least is a good addition, especially later in the game when it can have elemental effects and serves as a makeshift grenade. 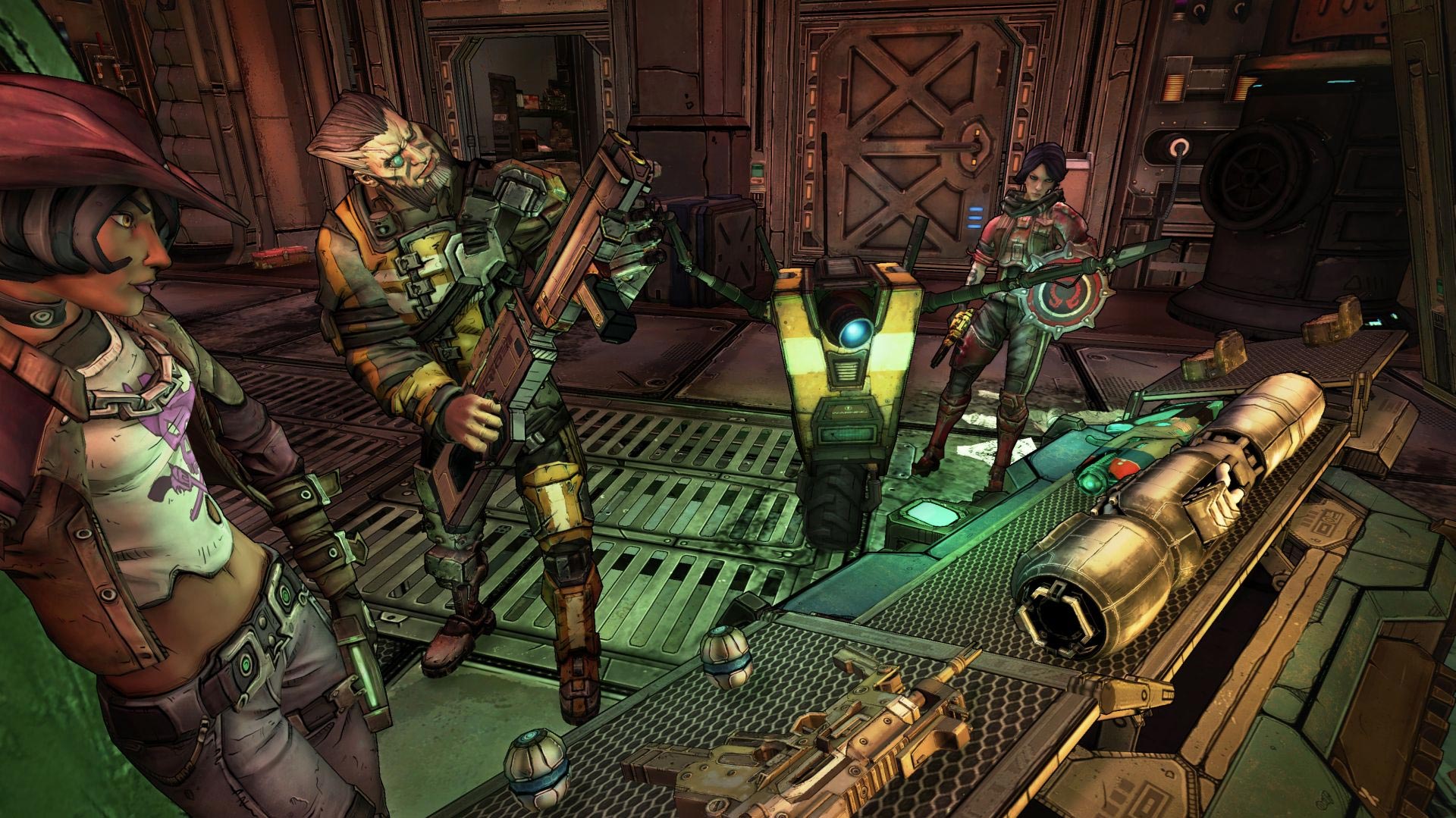 One of my favorite parts of the 'Borderlands' experience to date has been the crude, juvenile humor. While the storylines are generally weak, and most quests being boilerplate fetch or collect missions, the writing is snappy, topical, and laced with pop culture references. The jokes and characters are usually funny or so lame that they're funny, especially the beloved Mr. Torgue and the foulmouthed Tiny Tina. Unfortunately, the 'Pre-Sequel' doesn't carry on the trademark humor. Most of its jokes fall flat, and the characters are boring or unlikeable, including the player characters. The exception is the Clap-trap. His personality is the same as ever - alternatingly narcissistic and pitiful, but the real star of the show is his skill tree. His action skill bestows a random power to the Clap-trap and nearby allies. I was introduced to this ability when a Clap-trap joined my game and proceeded to activate "Funzerker". A festive notification popped up on my screen and my weapon began firing nonstop, outside of my control, and did not reload or run out of ammo for a considerable time. The other party members experienced the same phenomenon and the battlefield turned into a massive bullet hell. 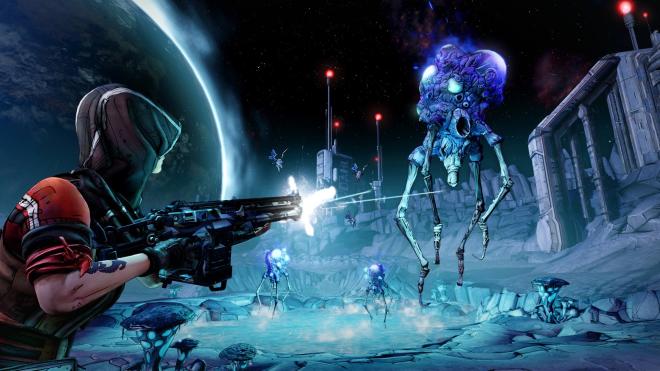 'Borderlands' hasn't made a lot of progress in the graphics department. While the game in general is very colorful in its cel-shaded way, with a palette matching its personality, the textures are lacking. The buildings and environments in general look around the same as the first 'Borderlands' way back in 2009. The novelty of the new moon setting wears off quickly, leaving boring, endlessly purplish-gray lunar plains in its wake. The characters have few moving parts and many returning characters have been simply recycled without so much as a reskin (although Moxxi does make an appearance in mechanic's overalls). The upside to a weakness in visuals is the lack of bugs or stutters - without much to render, and with the relatively small zones, the engine chugs along nicely with nary a complaint. 'The Pre-Sequel' continues the great tradition of the splash logos for new characters, offering some witty melodrama before each boss fight or major plot reveal. 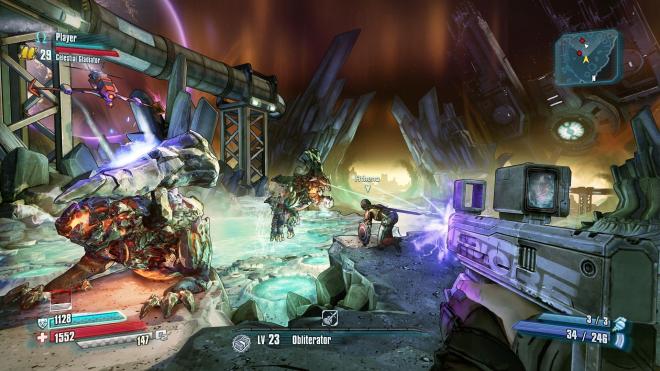 The audio has been implemented much better than the visuals, with a booming score and crisp, clear sound effects and dialogue. Due to 2K Australia's influence, all of the residents of Epsis seem to be Australian themselves, complete with the accents and friendly disdain for Americans. In spite of the weak writing, the voice acting is spot on. The guns have powerful sound effects and feel appropriately gun-like, even in the muffled semi-vacuum of 'The Pre-Sequel's' environments.

While 'The Pre-Sequel' does have four characters, each with dramatically different powers, the lack of creativity in sidequests and even main missions means that subsequent playthroughs yield diminishing returns. Badass tokens, which offer customization in the form of small stat boosts for completing challenges, are account-wide, which lets the player improve all characters at once, much like 'Diablo's' Paragon levels. The best part about the new game plus mode is that the second playthrough features running commentary from Brick and Tiny Tina, which is priceless. 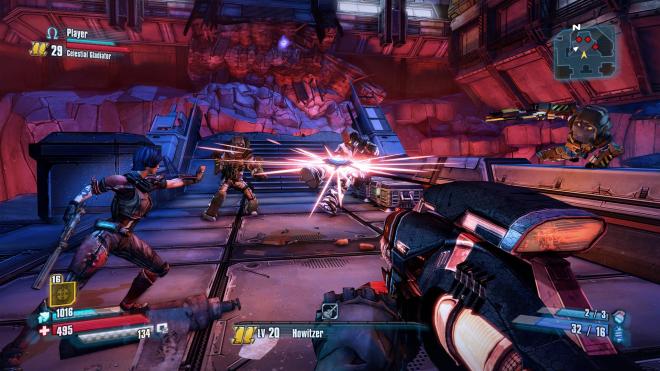 'Borderlands: The Pre-Sequel' offers just enough content to move out of expansion territory and into full release, but barely. For those who can't get enough Borderlands and relish the opportunity to experience some new characters and abilities, this will tide you over for a few dozen hours. For everyone else, it's not exactly a must-play title.