The Game Itself
4.5 Stars
The Video: Sizing Up the Picture
3.5 Stars
The Audio: Rating the Sound
5 Stars
Replay Factor
4.5 Stars
Bottom Line
Must Own

The first 'Civilization' game was released in 1991 (on floppy disks) and has been widely hailed as one of the most influential PC games of all time, especially in the realm of strategy. In 1999, 'Civ' developer Firaxis released 'Alpha Centauri', a turn-based strategy (TBS) title that was similar to the 'Civ' titles but took place in outer space, on an alien planet. This year’s title, 'Sid Meier's Civilization: Beyond Earth', could be best described as a lovechild between 2010’s 'Sid Meier's Civilization V' (with which it shares an engine) and 'Sid Meier's Alpha Centauri'. It is again set in outer space, with the player competing against not just human factions, but alien creatures and the planet itself.

The conceptual framework of any 'Civ' title is the board game Risk. There is a map covered in hexes, with each hex representing a single piece of terrain – water, hills, canyons, etc. The player establishes and maintains cities using the basic resources found on hexes, and with these creates buildings, world wonders, and mobile units like soldiers and workers. Soldiers can be sent out to fight and conquer other civilizations, and workers can improve basic resources, create roads, and gather advanced resources. With each release in the 'Civ' franchise, the rules and options available to each player have become increasingly complex. 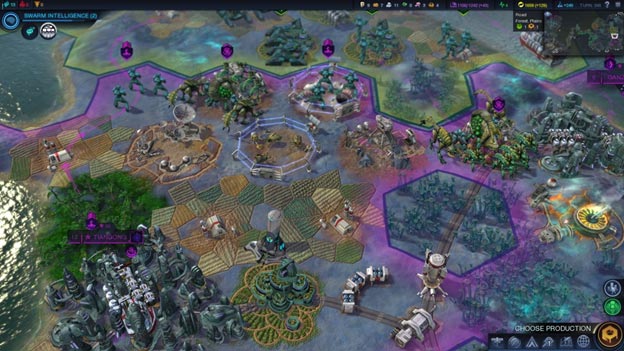 Most 'Civilization' games take the player on a journey through the basic lifecycle of the human race as we know it, from primitive hunter-gatherers to space-age cyborgs. 'Beyond Earth' takes place several hundred years in the future, where a calamity known as "The Great Mistake" has made Earth more or less uninhabitable. Every society with enough resources sends a colony towards a distant planet, the future of the species in their hands.

Each game of 'Beyond Earth' starts with the selection of several options. The nascent colony’s sponsor, cargo, spacecraft, and personnel can all be changed based on the player’s style and objectives. This is considerably more personalization than was available in previous 'Civs', where the player only received one bonus based on the civilization’s leader (all real historical figures). The planet itself can also be tinkered with, from size to climate to resource abundance and more. Once the colony ship and planet are ready, the ship makes planetfall and the game begins. Each turn, the player can slowly improve each of their cities and develop the colony's economic, cultural, and scientific achievements. 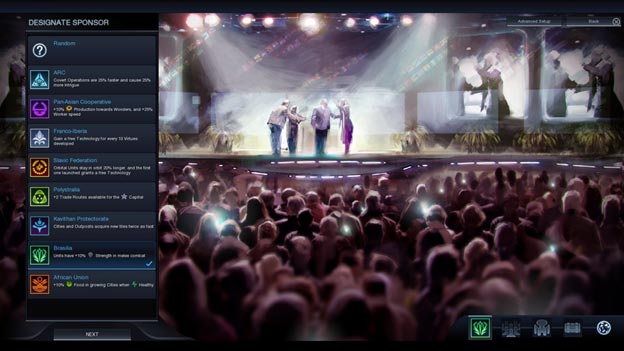 There are five conditions for victory, and it is up to the player to determine which one to pursue. Of the five, only one is completely unchanged from previous games in the series: Domination, or defeating every other colony on the map. Another, called Contact, is roughly analogous to an Economic victory, where money is important. The other three victories each correspond to an affinity. Affinities are how the player deals with the local flora and fauna. Purity seeks to eradicate native life and make the planet as Earth-like as possible. Harmony is focused on assimilating into the planet-wide alien consciousness. Supremacy concerns itself with advanced computers and robotics, hoping to advance itself beyond all biological life. Affinity is a wholly new mechanic in the 'Civilization' series, and in 'Beyond Earth' it functions extremely well. Each level in an affinity offers new bonuses and unit upgrades. They are not mutually exclusive – players are welcome to pursue levels in multiple affinities should they so desire, although this may slow down their progression towards an affinity victory.

Throughout each playthrough of 'Beyond Earth', there are quests and objectives presented to the player. This is also a new feature in the series. Some of them are longer, such as determining the fate of a small colony that has made planetfall near the player. Others are one-shot decisions that give a player the choice of one bonus or another based on buildings they create. I like the quest system, both for its ability to further customize a colony and for the sci-fi narrative that it includes. My only wish is that more quests had been added – many more – so that each playthrough feels like more its own epic science fiction storyline. Most of them are repeated in the same order from one playthrough to the next, cheapening their impact. 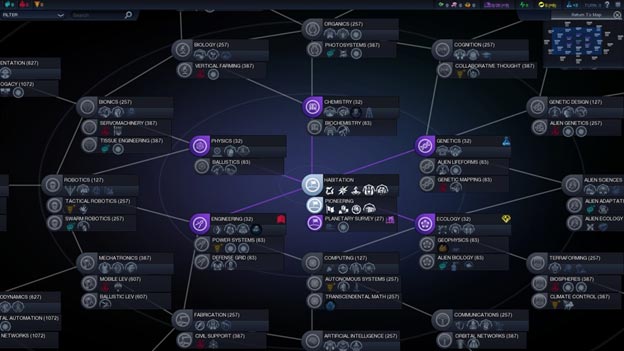 Greatly improved from previous games is the tech tree. It is quite massive, and each technology researched has several bells and whistles. Some have new buildings and wonders, others have new improvements for terrain tiles, and some have a precious affinity level included. Each "branch" of the tree, which roughly corresponds to a broad area of science such as communications, robotics, cybernetics, etc., has two "leaves” attached to it. The leaves are highly specialized fields of the branch and, while they take longer to research, also offer more specialized bonuses. This a great feature, especially considering that after five versions of 'Civilization', the tech tree was becoming a bit stale. 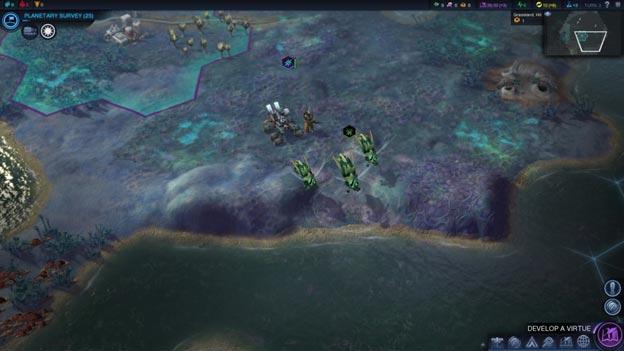 'Beyond Earth' uses the LORE engine, which Firaxis first created for 'Civ V' back in 2010. It’s not as old as some engines (Valve’s ancient Source comes to mind), but it has not aged well. Even with the graphics settings cranked up to "Ultra”, the game still looks a few years old. It’s not bad for a few years old, but not cutting-edge either. The colony leaders are only moderately detailed when they appear in the diplomacy window, and the units on the ground look a bit blocky when zoomed in on. In its defense, the colors are lovely and much more diverse than previous games. There is also a bit of late draw-in when moving the map around or loading up a game, but perhaps that is a fair trade-off when playing a game that requires no loading after the initial match setup. I would like to have seen more cinematics, especially after a victory. 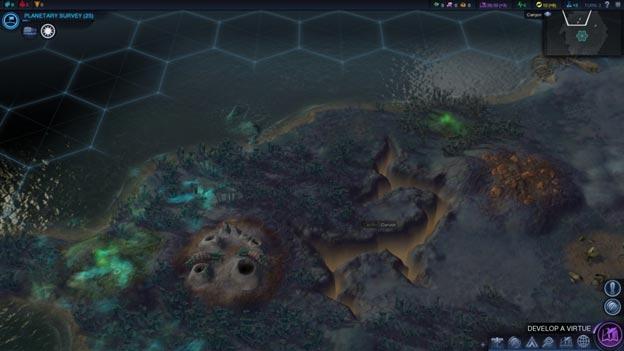 The game’s soundtrack is one of the best I’ve heard from a PC title in a long time. It has a bright, epic feel to it, reminiscent of early space exploration movies and space operas. It went a long way towards drawing me into the game’s futuristic, optimistic premise. The sound effects and voice acting are superb, especially the pithy quotes that play with the introduction of a new technology or wonder.

With so many options throughout each playthrough for customization, every match feels like a different experience. One match could be a domination victory on a tiny planet with scarce resources, while the next could be with a different colony on a massive, oceanic world with a turbulent climate. The game’s speed can also be changed for the more or less patient. There is also an interface for user-created mods, which can add a host of different permutations to each game and will only get better as the game ages. Sadly, there are no scenarios available at launch (scenarios being very specific sets of maps and objectives). 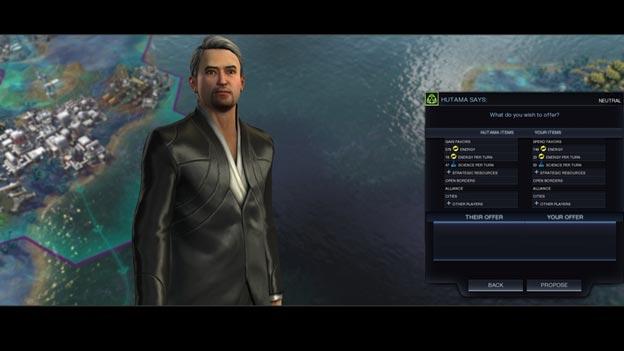 'Sid Meier's Civilization: Beyond Earth' is the best 'Civilization' I have played, and I have been with the series for quite a while. Every feature has been upgraded or expanded from previous iterations, and some are brand new, like the affinities and increased pregame customization. The level of personalization through each playthrough is deep, far deeper than any game so far in the series. It holds my attention from beginning to end, where in other 'Civs' I often found myself drifting away around the discovery of gunpowder. It is a wonderful love letter to fans of 'Alpha Centauri' and certainly one of the best turn-based releases this year.