iOS
Worth a Look
3 stars The Game Itself
3.5 Stars
The Video: Sizing Up the Picture
4 Stars
The Audio: Rating the Sound
3 Stars
Replay Factor
1.5 Stars
Bottom Line
Worth a Look

Playthorugh was done on an iPad 3 with some brief time spent on an iPhone 5.

The amalgam of video games that is the modern Square Enix has been in the video game industry for quite a long time, and those collected parts have delivered a catalog of iconic characters and experiences during their tenure. From 'Tomb Raider' and 'Kingdom Hearts' to 'Final Fantasy' and 'Deus Ex', their craft has delighted millions of gamers across generations of home consoles and PC. They're also no strangers when it comes to publishing for the handheld and mobile market, and their latest release takes arguably one of their most beloved antiheroes – Agent 47 - and sets him loose upon the iOS world.

Developed by Square Enix Montreal, 'Hitman GO' is a turn-based puzzle game that thematically takes on a board game style. Agent 47's clean-shaven head, black suit, and red tie are all nicely represented by a stiff-postured miniature that slides his way across five different levels, each consisting of nearly a dozen puzzles. Each of these levels begins with a top-down view of the game board, wherein Agent 47 and a variety of enemies are positioned at their starting points, and both the goal the grid-like network of available paths are laid out. From there, it's up to the player to interpret the path of least resistance. 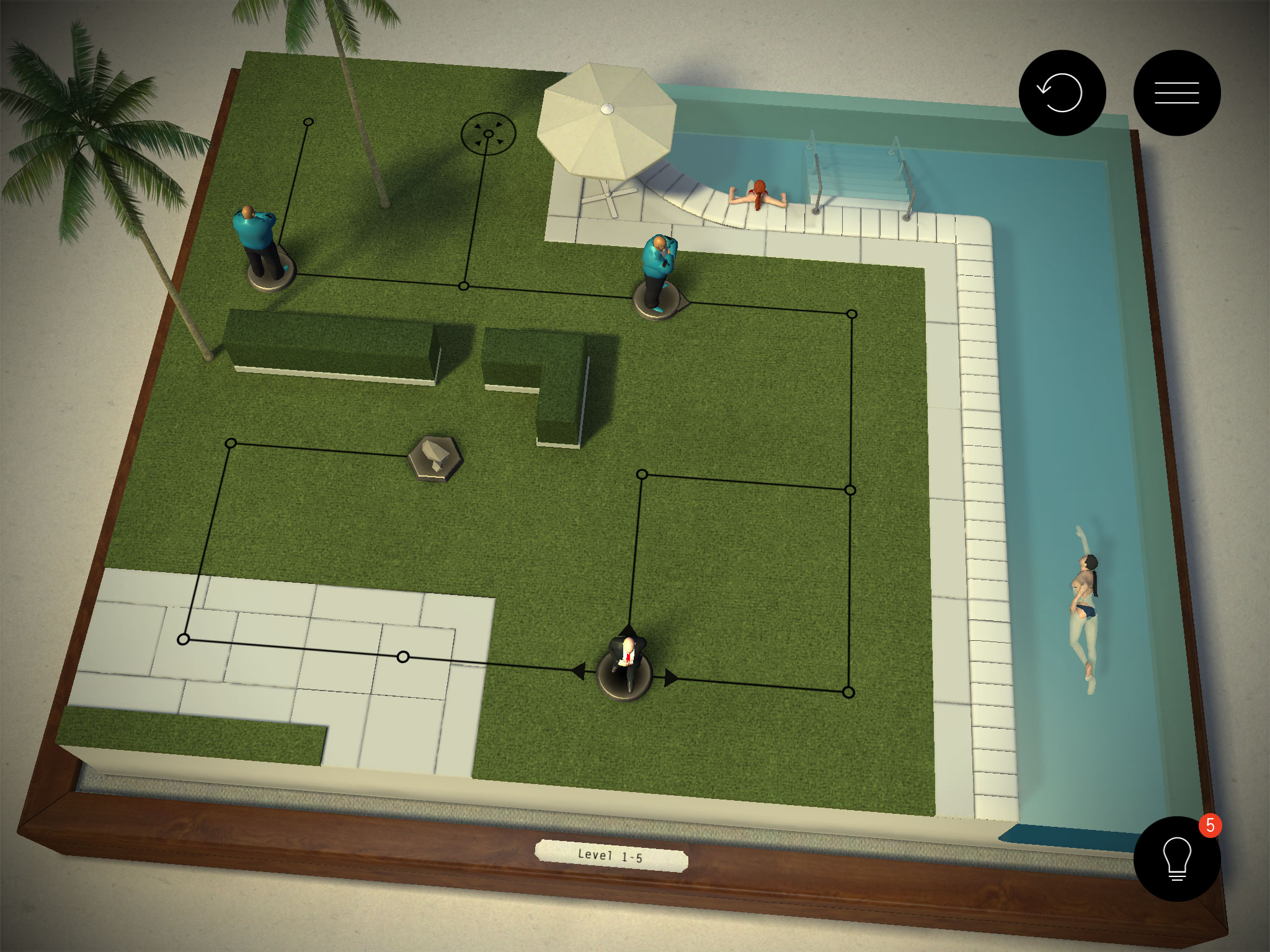 A handful of introductory training missions are designed to accustom you to the controls and strategy of the game. Agent 47 is directed by swiping your finger in the direction you want him to take. It sound simple enough, but 'Hitman GO' quickly ramps up the difficulty by mobilizing the once stationary enemies. Each move Agent 47 takes results in enemy movement. Getting in the way of their path, or getting too close to their line of sight, will end your attempt at completing that level, and your bald-headed miniature is knocked off the board. 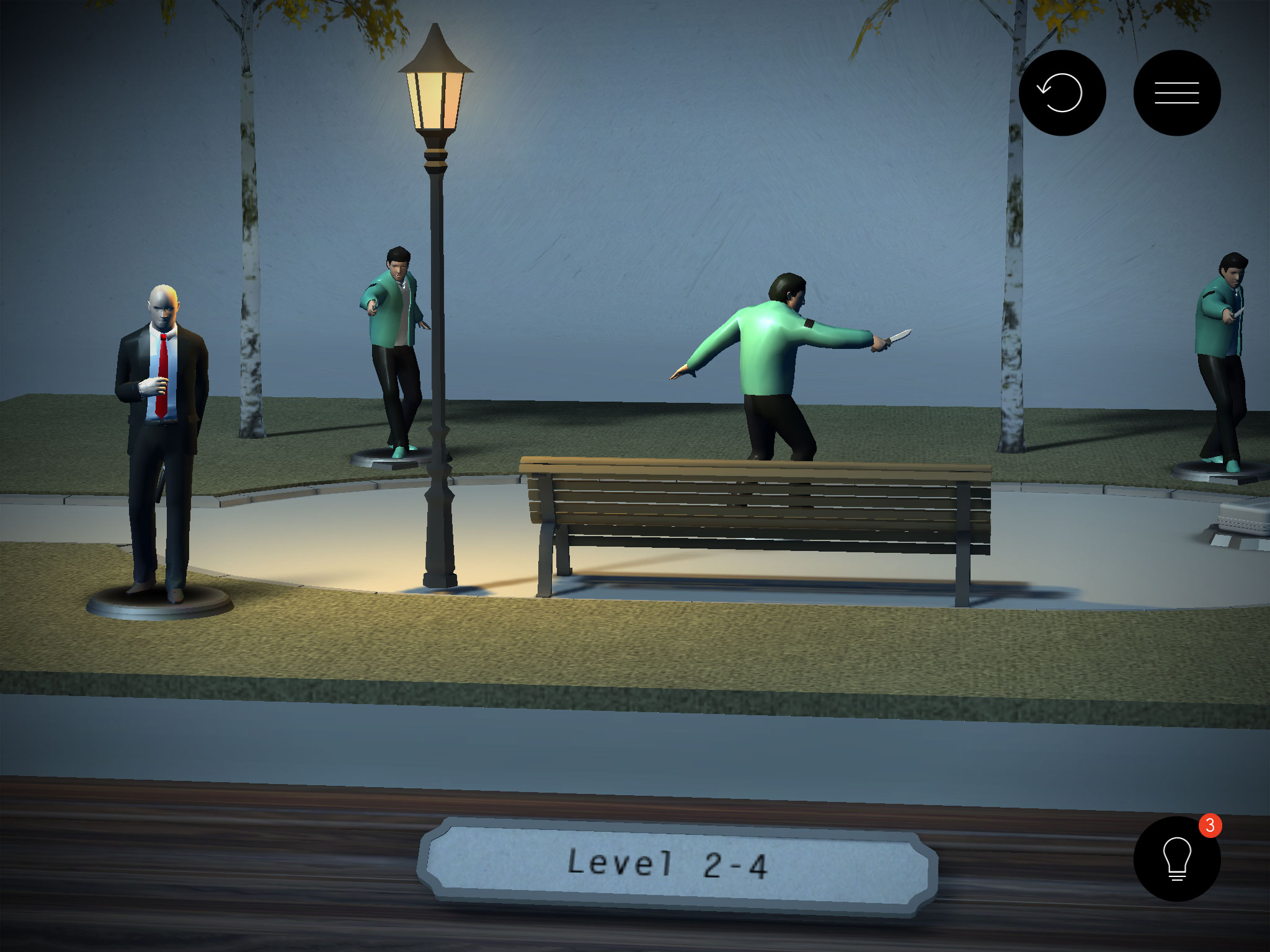 While the concept of 'Hitman GO' is incredibly simple, the enemy variety and strategy needed to complete later levels is what ultimately makes this mobile game fun, challenging, and addictive. Common enemy types are replaced with or added to by enemies that carry knives, enemies whose point of view is altered as they swivel on their bases, brutish thugs that remain stationary, and guards with dogs that will follow your path. Of course, it wouldn't be a true 'Hitman' game without a variety of tools at your disposal. Cans and rocks – when thrown - allow you to choose a spot to distract the enemies. Trap doors provide quick-travel options to various locations within the level. Disguises can be adorned that make you invisible to specific enemies. And Agent 47's iconic sniper rifle and twin-silenced pistols can be used as single-shot weapons, so choose your targets wisely. 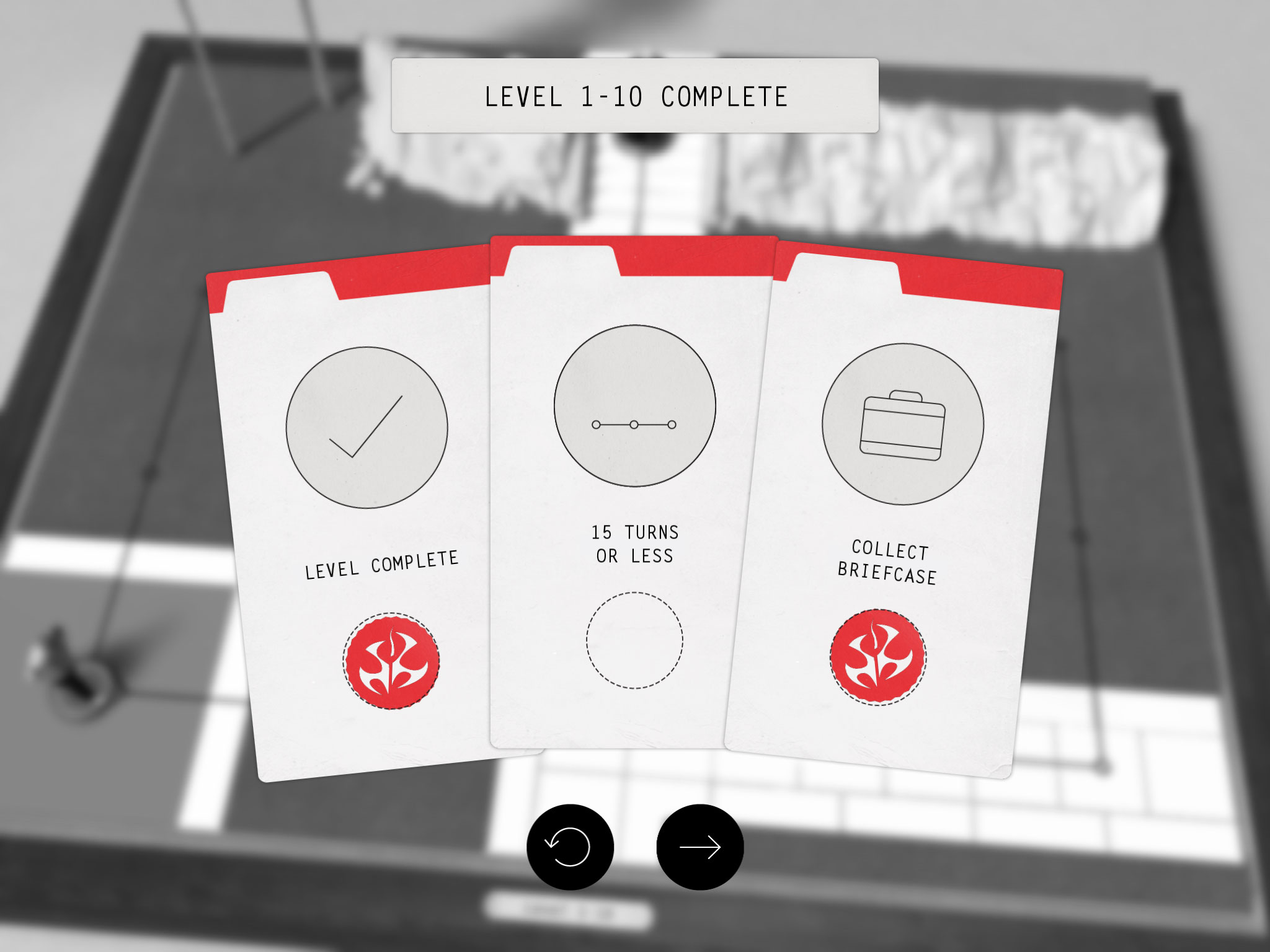 'Hitman Go' loads with five separate board game box chapters. Each level challenges you to complete mission objectives that generally fall into several categories: kill all enemies, kill none of the enemies, pick up the briefcase, and reach your destination within a specified number of moves. Where the first three objectives can be fairly easy to complete, it's the last objective that provides the most challenge. How well you do - how many objectives you complete - will be calculated across all missions and will unlock later chapters. Of course, 99-cent in-game transactions will allow you to unlock them at will. Regardless, it's worth it to work your way through to the last available mission as it represents levels inspired by the ever popular 'Hitman: Blood Money.' 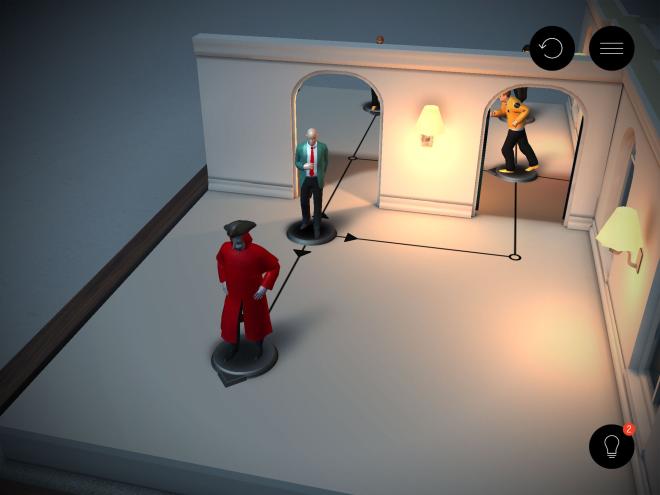 'Hitman Go' takes two of my favorite hobbies – video games and board games – and melds them together into a uniquely inspired experience. A first glance at the game in action undoubtedly represents a board game theme. Like any number of the miniatures-based board games I currently own, the layout of the level, the detailed figures, and the environmental add-ons (chairs, bushes to hide behind, the placement of keys required to unlock doors) all scream board and dice-based adventure. The model-style visuals are beautifully rendered and nicely immerse the player into Agent 47's world through their diminutive size.

Interestingly enough, I was more taken with the display of the individual missions that can be selected from the main menu. Each is presented as a separate board game neatly packaged with obligatory cover illustration, side bar code, and small text details that likely describe the adventure that lay ahead. Each and every one left me with the feeling I generally get when first unboxing a newly purchased board game – excitement, anticipation, and child-like enthusiasm. I wanted to gently lift the cover off, read through the rules, punch out the token boards, and roll the dice. Fans of tabletop gaming will undoubtedly experience a similar feeling.

Taken from a minimalist reference point, there is very little that 'Hitman GO' has to offer from an audio perspective. The game does not utilize any voice acting, and the level of special audio effects are practically non-existent. However, the subtle use of environmental audio is more than enough to get the job done and further immerse you into this pint-sized world.

Depending on the location of the mission you have selected – open-air mansion, crowded opera house, a stroll through the park at night – will dictate the off-in-the-distance sounds: splashes that accompany fun in the pool, birds nesting in palm trees, crickets that chirp at night. The real highlight occurs when facing down the individual bosses chosen for termination by Agent 47. Accompanied by the haunting sounds of Shubert's operatic masterpiece, 'Ave Maria', it sends a chill down my spine every time I hear it.

Although trying to perfect each mission of 'Hitman GO' is a fun and enjoyable experience, once completed there is little in the way to prompt playing through the game a second time. Square Enix is hinting at additional missions for the future by displaying a paper-wrapped 'coming soon' box on the mission select screen. Until then, it's unlikely that you'll feel the need to start the game over from the beginning. 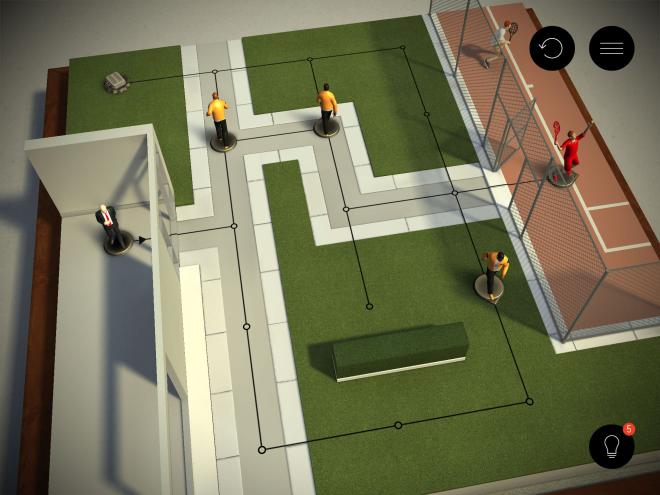 While the idea of a board game version of 'Hitman' was enough to remove $4.99 from my Apple account, the end result was more of an aesthetic than a true representation of a board game. There were no dice to be rolled or event cards to be read, the idea of a competitive of co-operative option was non-existent, and the end result was simply an interesting take on a turn-based strategy mobile game. That's not to say that I didn't enjoy the time I spent with 'Hitman GO'. Each boxed mission took anywhere from 10-15 minutes to complete, with an additional 10-15 minutes to perfect. I look forward to future downloadable content the team at Square Enix Montreal may be currently developing, and can only hope they provide additional missions specific to the 'Hitman' universe.