The last few years have seen big changes in terms of Disney characters in video games, with everything from the NES classic 'DuckTales' to the entire 'Star Wars' property being shuffled in and out of the vault.  One of the biggest things to come out of this new Disney has to have been 'Disney Infinity.'  Much like Activision's 'Skylanders' and Nintendo's upcoming amiibo, 'Disney Infinity' is built around the idea of collectible plastic figures coming to life within a video game, but in the case of 'Disney Infinity,' there are two major distinctions. Not only is there an iconic character roster that gets bigger with each new Disney movie, but there's also the whole Toy Box mode which takes those characters beyond their play sets and into a world built by the player.

'Disney Infinity: Marvel Super Heroes,' aka 'Disney Infinity 2.0,' promises all of this and more as it seeks to introduce the super hero craze into the mix. More heroes, more figurines, more play sets, more creative options. Even better for some, this year means the jump to the PS4 and Xbox One.

I'm soaring as Iron Man, not through the icy New York setting of his 'Disney Infinity: Marvel Super Heroes' adventure, but through a fairly vacant panorama. It's the Toy Box, my Toy Box, where I've decided to make a game of my own. As my ambitions often far attempt to exceed the utility of my closest tools, I venture to create a cinematic experience, and to do that I need Iron Man, magic wand equipped in place of his red blasters, to float aimlessly around a big, open sky while I think. I did this for roughly five hours, slowly building, but mostly thinking, working my way through the game creation systems, trying to get my game just right. 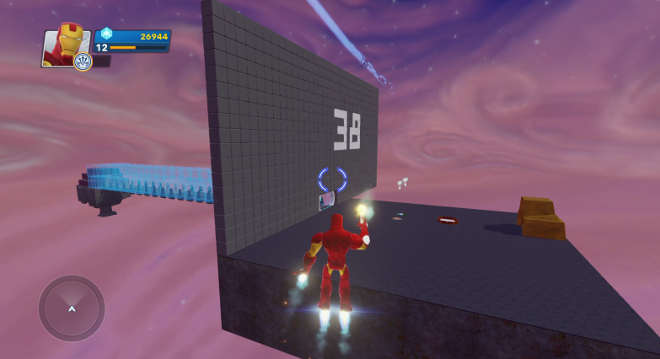 This didn't happen in the first 'Disney Infinity,' and I can't think of a better way to say how much the Toy Box has improved than to marvel at the absurdity of Iron Man and his magic wand as the proxy for my first enthusiastic venture into today's creation-game game creation craze. It's not 'Minecraft' nor 'Project Spark' or even 'Little Big Planet,' but instead, it is 'Disney Infinity 2.0' that has ushered me into the zone of an imagination builder. Or, I could even say I became an Imagineer for a time.

While the improvements are a leap forward, the way the game works remains basically the same as the original. It starts with a big, empty world and the placing of game objects, from the wonderfully humongous Disney-theme setpieces down to the little baby-sized Thors, Lightning McQueens and Snow Whites to populate the new creation. Most important, though, are the Creativi-Toys, those objects which can be connected to each other and static objects in logical, game-creation statements. Eventually, the world will come alive with doors opening as characters enter trigger zones, fireworks exploding when goals are accomplished and even little bits of player designed platforming, combating, sporting, and racing adventures. 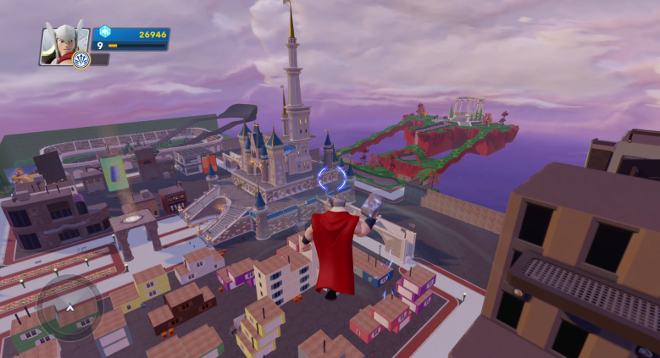 Improvements from last year's well-received effort abound. The menus are cleaner, and the route towards better toys is no longer random. Now there is grids of toys that unlocks ia fashion similar to an upgrade tree. And like an upgrade tree there are two importast aspects at play.  There's the essential element of choice, and then there the grid of options just beckoning to be explored. Not every option is worth a "wow" moment, but learning can and can't be done is fun in its own right. It may be comparably simple to other games focused on creation, certainly more limited, but it's exactly the kind of simplicity I need to actually get into building my own stuff.

There's also a far superior introduction to the Toy Box, but one that only went just far enough to nudge me into learning the rest for myself. The process of learning is itself a lot more engaging, subsequent of my happily meandering disposition.

Over in Avengers land, the play set native to the 'Disney Infinity: Marvel Super Heroes' starter pack, I can't say I ever fell into the same kind of groove. You're tasked with an adventure in New York, a familiar Asgardian foe as the nemesis, to be felled at the hands of Iron Man, Thor and the Black Widow, the starter heroes. It's a problematic brawler, basic and, ironically, unimaginative. It's more or less a set of "go there, beat up those guys" quests reminiscent of the lackluster Incredibles adventure from the first release. 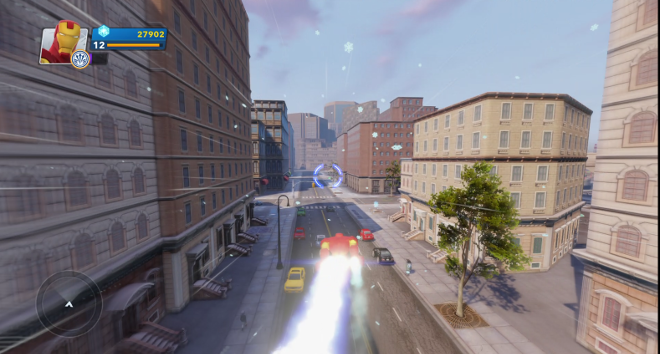 I punched, kicked and flew my way through hundreds of carbon-copy Ice Giants without a second thought, or even a first thought. I'm sure the simplicity of this setup seems like a good option for the low barrier of entry Disney intends for the series, also allowing any of the compatible heroes free reign without corrupting the combat flow, but the result is desperately wanting for excitement and variety.

Local co-op is the one thing that redeems the adventure. As long as the mechanics work and there's something to do, which is mostly the case here, having a friend there makes it enjoyable, much as it does it most other co-op games. My roommate threw Thor on to the accompanying figurine slot, and we diverted from a mission for a good long hour as he picked up and played keep away with an Ice Giant. Silly, yes, but that's kind of the point.

There is one great improvement on the combat side of things. Upgrade trees are now embedded in each physical figurine. Pummeling foes with Thor, eventually earning upgrade points, I opted for the melee combo improvements, while with Iron Man I took a ranged pathway. They felt distinct, my own, instead of a carbon copy of everyone else's Mr. Incredible or Captain Jack.

Best of all, 'Disney Infinity 1.0' figures are granted their own upgrade trees too, though they can't unlock any sort of super attack that the new guys have. Still, my Wreck-It Ralph never felt so alive. Any figure collected as part of the first release is compatible now in any Toy Box-created scenario. Unfortunately, the play sets don't transfer over. They will forver be imprisoned in the 'Disney Infinity 1.0' code. 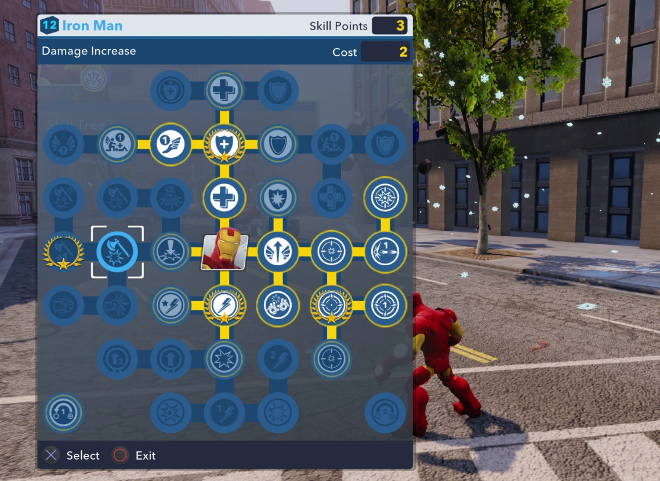 I was immensely grateful to find I could level up my characters outside of their play set, meaning once I finished the campaign I found no reason to go back. It's for the best. Disney made sure leaving the play sets leads to a fuller experience than before, and that starts with the new Toy Box games, unlocked via physical tokens included in the starter pack (taking the spot of a Play Set piece).

Both Assault on Asgard, a tower defense romp, and the isometric-viewed, 'Guardians of the Galaxy'-inspired Escape from the Kyln, where you venture through dungeons with improvable sidekicks, were inspiringly built through the tools of the Toy Box. Disney's intention to open my eyes to the possibilities worked well, as throughout playing I found myself pondering how I might change this game, how I might use the ideas to make my own experience. In another smart move, these games have their own sections in the Toy Store, which allow you a direct path to the goodies you may want to grab after successfully fending off a wave of Ice Giants or uncovering some new treasure with which to keep your sidekick up to snuff. 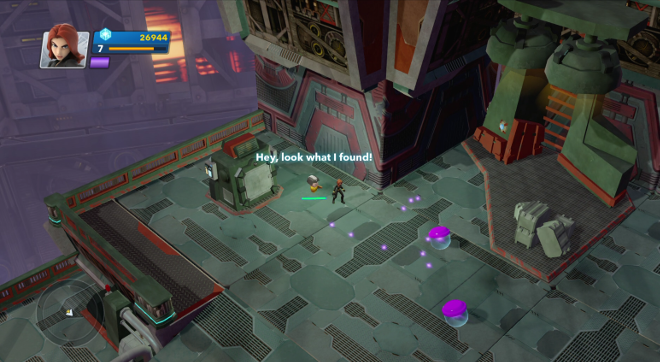 With 2.0, Disney has created a far more successful cycle of edification, unlock and create, all the while you're still in the act of playing a game. Maybe it's meant to keep the kiddies engaged in its simplicity, but it's also been a boon to my own desires to finally get creative. 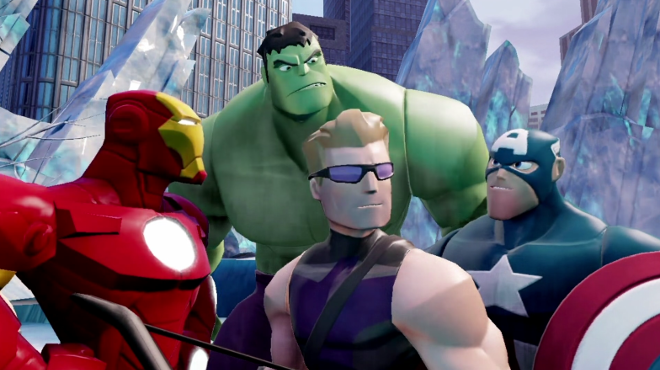 In the effort to make sure everything fits together, especially when they really shouldn't (Thor standing atop Scrooge McDuck's bank comes to mind), the visual styling comes across as a little bland, but workable. The blank canvas has its cost on any ambitions the team might've had toward visual immersion. It's forgivable, considering the new successes of the Toy Box, though the Avenger's play set might have benefited from some more visual personality.

It doesn't help that the resolution and frame rate aren't quite matched to the new consoles for this year's release. They're improved, but still not quite there.

On the other hand, the centerpieces, the in-game proxies for those collectible figurines, are all deservingly realized with charisma and character. Iron Man drops out of flight with arms twirling for balance, just as Thor's hammer toss looks and feels appropriately powerful. 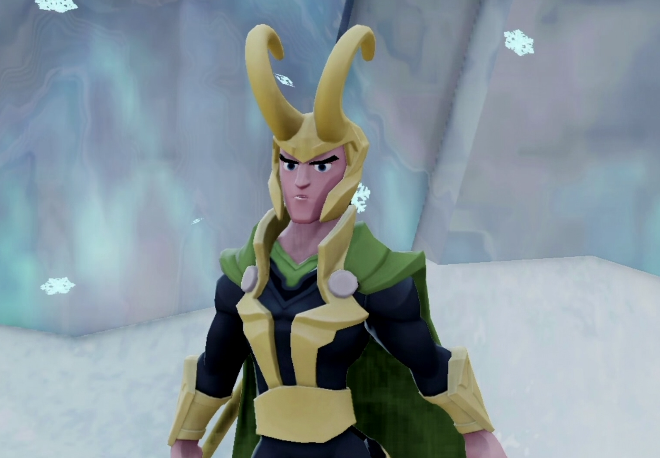 The quips out of the mouths of our heroes touch closely with what we've come to expect following their parade of blockbuster movie success, all with a hint of Disney optimism. Black Widow marveled at my ability as she punched her way through the umpteenth badguy, the gallantry of Thor and sarcasm of Tony Stark delivered with an eye to the controller-wielding gods.

On the musical side, it's all Disney, all the way. Bubbly heroics, subtle dreaminess and sentimental turns guide you through every mode. I do wish you had more control over the background tunes in Toy Box mode, but that's a part of the simplifying limitations Disney sets on the creative stuff.

The Avenger's play set is not going to last long, but leveling up characters and venturing into the Toy Box veers closer to the game's namesake.

Likewise, the already growing offering of user-created Toy Boxes will continue to inspire, even if they naturally range from a gamut of excellent recreations of Disneyland Paris to extremely simple, one-off platforming challenges. Like any creative-type game, it'll be the community that drives continued growth more than anything, though Disney is more than likely to keep releasing Play Sets, heroes, and tokens as well. That comes with its own value vs. replay factor discussion.

Co-op remains the most important non-essential to the game. You can do it any time, in any mode, and it's completely seamless. Parents, kids, friends and frenemies should take heed. 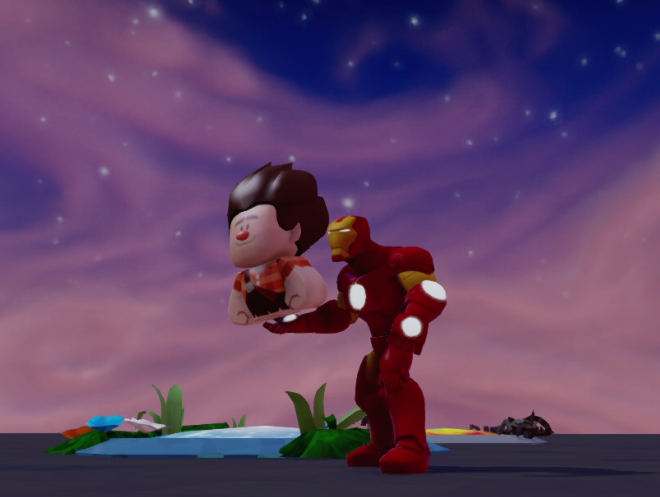 All in all, the comparitive quality of 'Disney Infinity: Marvel Super Heroes' multiple play modes may mean more than the addition of the Marvel Universe. Once the initial thrill of bringing Iron Man, Black Widow or Thor figurine to life wears off (it takes a while, admittedly), what's left is a game of disparate successes. The Play Set is, at its best, an excuse to spend time with a co-op buddy, whether it's an eager kid or a like-minded pal. The Toy Box, however, is vastly improved, not overtly but in the subtle ways it encourages the player to learn the game's systems and use them in conjunction with that thing Disney values so highly: imagination.