With twelve installments in less than two decades, the 'Call of Duty' franchise holds a rare place in the gaming industry as a true juggernaut in terms of sales and widespread appeal.  From its humble roots as 'just another' World War II FPS to its meteoric rise in popularity and dollar signs with the shift to the War on Terror in 'Call of Duty: Modern Warfare,' the annual 'Call of Duty' installment has, for at the past few offerings, began to turn once eager gamers, who were more than willing to put in double digit, if not triple digit hours into the multiplayer system, into fatigued skeptics with a true law of diminishing returns in not only the story department, but a multiplayer system plagued with griefers and exploiters, not to mention a lack of innovation and ingenuity. While not the first title in the franchise to make its way onto the current generation of consoles, 'Call of Duty: Advanced Warfare' marks the first time an entry in the series that was designed with the current systems in mind.

Abandoning a more grounded approach to setting, 'Advanced Warfare' puts the gamer in the role of Jack Mitchell, Marine turned private military contractor for Atlas Corporation, founded and led by Jonathon Irons (Kevin Spacey in a prominent and heavily advertised role). Jack's world on the surface seems familiar to our own, but with the addition of a cybernetic hand to replace the one Jack lost in a blast that killed Irons' son and Jack's partner, the world of an Atlas mercenary is enhanced by an exosuit that looks straight out of the film 'Elysium.' What this boils down to is a 'Call of Duty' that adds an entire new dimension to in-game action. 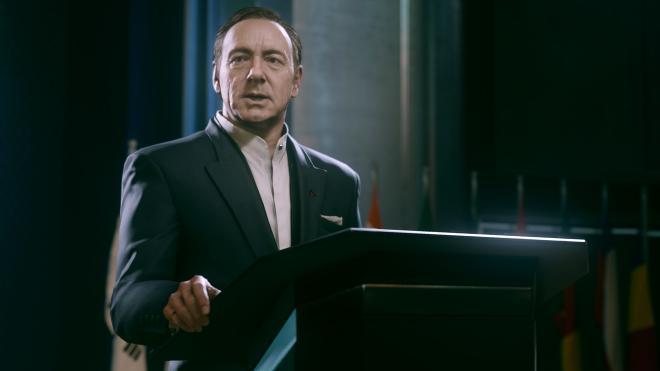 'Call of Duty: Advanced Warfare' remains at its core, what a gamer should expect from a 'Call of Duty' game. The control scheme and general user interface remains unchanged; what's new this year are both A/V enhancements and the exosuit system. The exosuit allows players to traverse large areas with boosted jumps, fall fatal heights at a steady pace, slowed to a gentle landing by retro rockets, bring up a quick shield to make it to more stable cover, or boost one's health regeneration rate to become a walking avatar of death. In both the single player and multiplayer realms of the game, the exosuit takes the familiar and adds enough seasoning to make players rethink the way the play a first person shooter. No longer is getting caught in heavy fire a death sentence; your options are many: pull up a shield for instant cover, strafe with rocket assistance, or take to the skies shattering your enemy's lock on you and raining down your own torrent of bullets in retaliation.

It's definitely recommended, even if one doesn't normally, to play through the campaign of 'Advanced Warfare' if for little more than to be become more acquainted with the new additions to the controls, so multiplayer has a slightly less steep learning curve. More importantly, 'Advanced Warfare' features a narrative that for the first time since the conspiracy tinged insanity of 'Black Ops' and Michael Bay-esque 'Modern Warfare 2' is engaging and gripping.  The world of being an Atlas contractor is steeped in moral dilemmas and on more than one occasion will your moral compass be checked. Once the single player experience ends, multiplayer beckons and yes, you will heed its call.

Gone are the days of absurd killstreaks, rewarding only the most rabid game loyalists. Instead, 'Advanced Warfare' places the emphasis on pure skill and clever use of your exosuit and environment. The action comes in all directions and you must adapt or perish. Borrowing from 'Ghosts,' 'Advanced Warfare' gives players ownership of their online characters with simple, but appreciated customization of player models. Where the game truly shines however, is the seemingly infinite number of loadouts to be created. This year, killstreak rewards can be upgraded, all at the cost of more kills to activate; however, many, especially those more likely to support strong team players, can be turned from killstreaks to support streaks. These touches are gladly welcomed and subtly, but powerfully make 'Advanced Warfare' stand out from the pack.

All the standard multiplayer modes return and for those continually frustrated with not being able to go toe-to-toe with 'Call of Duty's' best, an anonymous, level playing field is offered in the form of a combat training mode that picks your loadouts and pits you against a mix of bots and players of similar skill. It's an essential addition that should have happened years ago and even veterans would find playing here useful for the first few matches. Sledgehammer Games deserves hearty praise for making 'Call of Duty' a relevant multiplayer and single player experience, almost to the point, that their work on 'Modern Warfare 3' is a thankfully distant memory.

The jump to the Xbox One for the 'Call of Duty' series harkens back to the same 'wow' factor elicited from the original Xbox to Xbox 360 leap, and later when the series abandoned its WWII roots and the original 'Call of Duty 4: Modern Warfare' was released, in terms of visual appeal. The game might not push the new console to its full limitations, however that doesn't mean the game isn't stunning to look at. Character models are highly detailed, although not entering the uncanny valley in terms of realism. Still, the new attention to full actor motion capture is felt throughout the game's cutscenes. The detail of nearly all aspects of the game, and specifically, primary in-game assets, is well above-average; only under close scrutiny do background objects show some pixilation and lack of clarity. 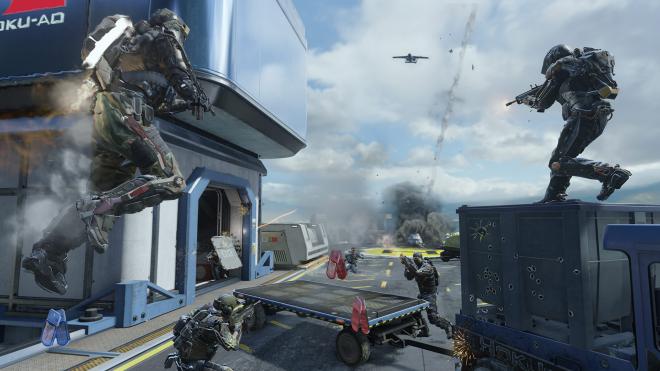 On the stability front, 'Advanced Warfare' holds up like a champ, with a steady consistent frame rate that I would estimate in the highest 40s to mid 60s. There's no screen-tearing and unlike the so-so debut of the franchise on the console, 'Call of Duty: Ghosts,' 'Advanced Warfare' looks from stem to stern, like a title meeting the expectations of what a modern game should be.

Aurally, the 'Call of Duty' franchise has always sounded stellar, even with installments that were dismal in all other aspects.  'Advanced Warfare' sounds every bit the blockbuster it portrays itself as. Effects are realistic when applicable and even in instances where the in-game equipment is light years beyond our modern technology. Voice acting is stellar and at worst, merely competent, with Kevin Spacey delivering the most convincing and engaging performance of the game. Surrounds are utilized to great effect at all times, from in-game action to real-time cutscenes; there's never an instance where anything feels imbalanced.  Even the generally overly grandiose soundtrack feels like it's been reined in at the appropriate moments. 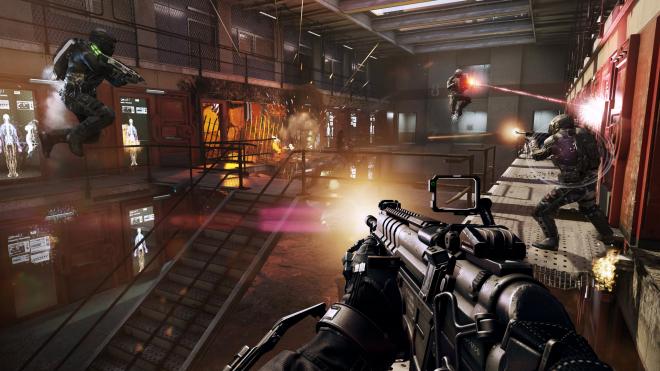 It should really go without saying that a 'Call of Duty' title sports massive replay value. While a strong case could be made for a noted fatigue towards the series in the past few years, 'Advanced Warfare' sports some of the most engaging and outright fun multiplayer action since 'Black Ops' radically bucked the status quo of what the series had to offer. From all the standard multiplayer fare, to the greatly appreciated XP-awarding Infection mode, 'Advanced Warfare' re-levels the playing field by emphasizing pure skill instead of gimmicky killstreaks, only available to the most devoted of players. The future tech of the game's setting introduces the subtle, but incredibly powerful extra dimension to the regular approach; no longer is 'Call of Duty' a horizontal shooter; the vertical component granted by the incredibly fun exosuits, will force veterans and novices alike to step up their game and rethink the way they play. 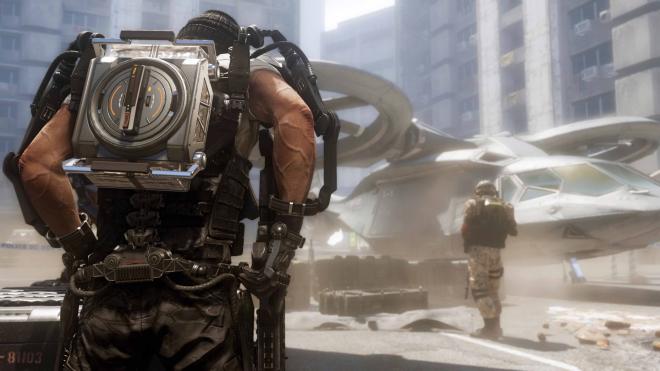 'Call of Duty: Advanced Warfare' is a true hit; it may be too soon to call it a masterpiece in general, however, narrowing one's focus to the franchise, it is an unequivocal masterpiece, perhaps only outclassed by the now-dated but streamlined 'Modern Warfare 2' and mind-bending story of 'Black Ops.' Sledgehammer has stepped their game several times over and redeemed their reputation after involvement in the series' worst offering, 'Modern Warfare 3.' Gone are the days of modern terrorists and the exploits of Special Forces operators; 'Advanced Warfare' ushers in a sci-fi tinged universe that story wise represents the same shift from World War II to the War on Terror that occurred between 'Call of Duty 3' and 'Modern Warfare.' The stretch into the more fantastic might alienate some, then again it would be naïve to think that gamers nonplussed with the more grounded approach of previous installments, won't give this vision of the future a try.  While by no means, a 'Game of the Year' contender as a whole, it is a must purchase and will serve, hopefully, as a template to be refined over this generation of gaming.