Capybara Games, perhaps best known for iOS hit 'Superbrothers: Sword and Sorcerey: EP,' is taking on the sidescrolling genre with 'Super Time Force.' Exclusive to the Xbox 360 and Xbox One, this hyperactive shooter seeks to reach new levels of insanity with the Tim-Out mechanic, allowing players to pause the game at any time, rewind and spawn in another member of the 'Super Time Force' to fight alongside the shadow of a previously player-controlled character. As this may be the first time many players see a Capy game, the stakes are high for the growing developer.

There’s this flying swat truck level in ‘Super Time Force.” Your hero(s) are standing on the back of this thing while it flies to a megacorporation you’re meant to infiltrate later on, but right now you’re just protecting the truck as enemy vehicles ram into it. Many games throw this little twist at you – a static position you need to protect as the health bar anxiously recedes. This truck, however, goes down in about 25 seconds, which, as just one member of the Super Time Force, is impossible to prevent.

But you aren’t just one guy, you’re thirty well-armed combatants, zapping into existence in a simultaneous tag team, a temporal madness that breeds not only the expected chaos, but an abundance of strategy. As you position your blocker, aptly named Shieldy Blockerson, a character spawned in after the death of your machine-gunner, Jean Rambois, five seconds before he’s to be taken out, you protect Jean, collect his phantom and use your newly equipped machine gun ability to eliminate a ramming vehicle. All of the sudden your swat truck can last 30 seconds. 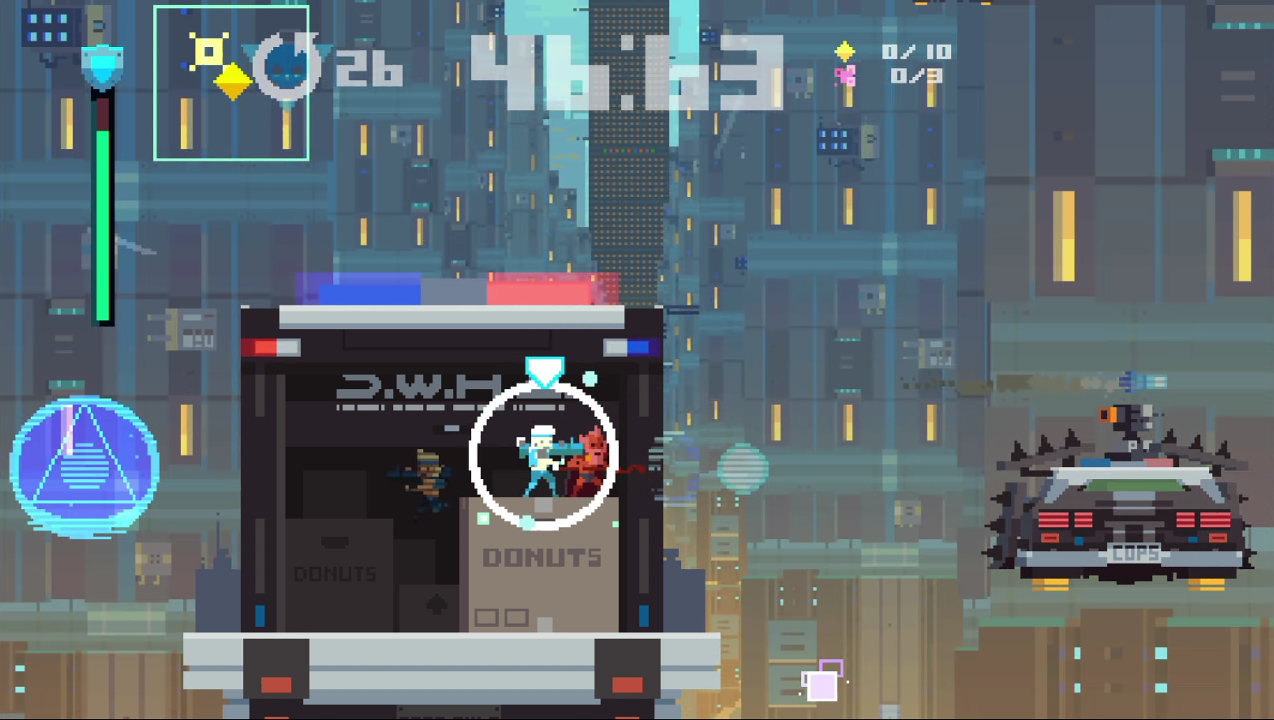 Then you throw in the explosives guy, Jef Leppard, who takes out with ease those ramming vehicles from a distance in accordance with a fellow sniper, whom you had already positioned to coordinate with the future explosives man previous to his existence. Then you’re lasting 45 seconds. Finally, as an intimidating helicopter hovers above, threating with machine guns, you bring in a lightsaber-wielding Jedi, Lou Don Jim, to strike a deadly blow. He gets one shot in, takes out a rotor, and dies. You go back five seconds, spawn another lightsaber guy, he takes out the other rotor simultaneously, dies. Do it again and again to take out the body.

Lightsabers, bombs, boomerangs and an arsenal of ammunition are thrown in one instant and the helicopter plummets roughly five seconds after it spawns. The level is won. ‘Super Time Force’ is like no other sidescrolling shooter you’ve ever played. It may very well be the best.

The setup is deceptively simple. Sixty second on the clock, get to the end of the level where some kind of miniboss usually awaits. The entire game throws a Mega Man-style, whatever order you want, level choice system at you, each an era of time and consisting of four separate segments, the final a climactic boss fight. You see, you're a part of the 'Super Time Force,' and it's your job to right the wrongs of various time periods to make things super awesome for your leader, Commander Repeatski. He's insane, but so is the gameplay.

Everything against you is a one-hit-kill, but death is no big thing for a time traveler. Whenever you die, or if you go into a Time-Out by choice with the "B" button, you're allowed to rewind to any point previous along your progression in the level so far (30 times per-level, with the opportunity to earn more). Find the point in time when you want to respawn, and choose from any number of members of the 'Super Time Force' to pop into existence and hopefully save a teammate. Saving that teammate and then grabbing the resulting floating power up grants your current character one extra hit before death and the charge attack of the character he/she saved, in addition to the one you already have. 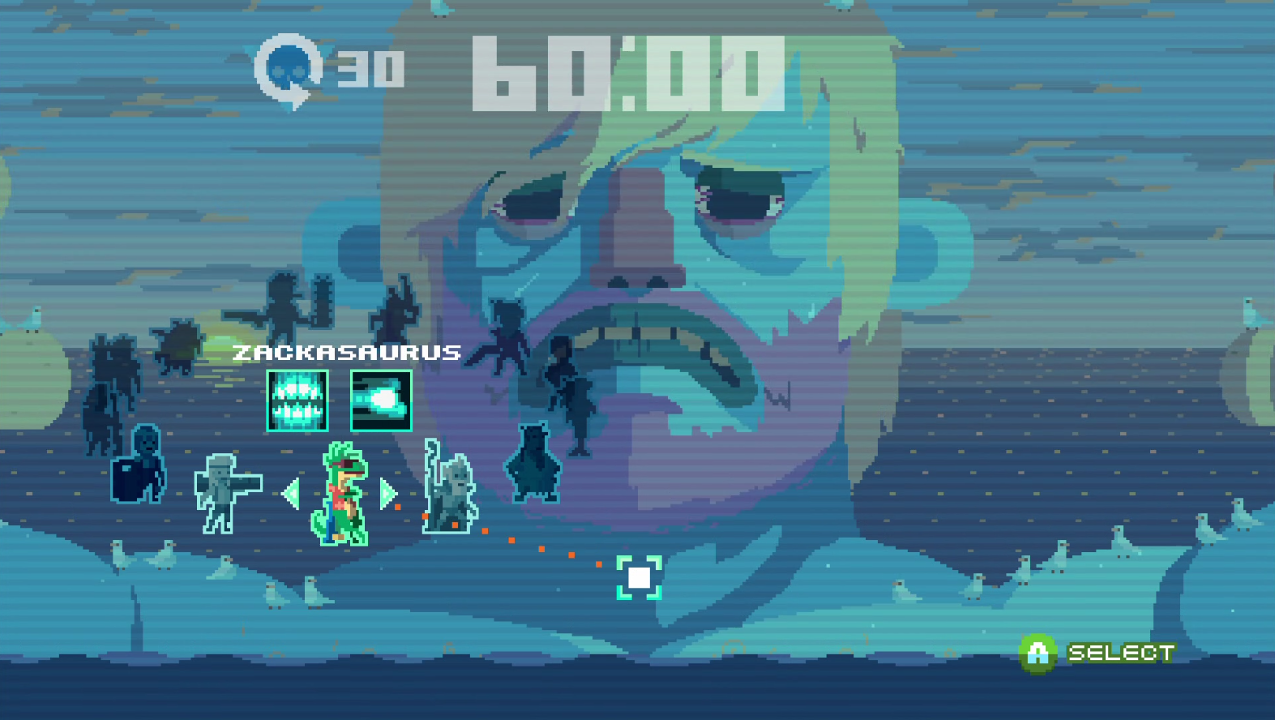 Anytime you go into Time Out, you're evaluating what you know is coming and choosing the team member best suited for the job, each of those team members equipped with a basic attack and a charge attack. Sometimes that means utilizing Zackasaurus' head-stomping skateboard to surf over a crowd of foes, sometimes it means doubling back as sniper Amy McKillin for a vantage point and saving Shieldy Blockerson before he makes his inevitable fatal mistake. The scenes start piling up, team members eventually eradicating entire waves of foes in an instant, always for the sake of pushing forward and beating out the clock.

What this mechanic does to, and what it allows in, the stereotypical sidescroller is incredible. The levels are technically short, but the action is ramped up to an insane degree. Stampedes of dinosaurs show absolutely no restraint in their attempt to run your down, kamikaze bandits fling themselves at you in a manic, crazed post-apocalyptical and any number of dangerous weapons are pointed in your direction almost all the time. Were life a sacred thing, this game would be impossible. As it stands, it’s fun to die over and over again, using your foreknowledge to anticipate where that bandit is going to land, shotgunning her out of the air before she can blow up your teammate.

And still, contrary to the chaotic nature of it all, Capybara Games reigned in the insanity with impressive ability. The levels are crafted with care, ensuring that one scenario after another is always manageable with the tools you're given. More importantly, no level feels wasted or indulgent. Most ideas that drive a level, like the swat truck, are used just once. A medieval level sees you escorting a nuke battering ram to a castle, asking that you continually respawn your team to prevent unrelenting simultaneous attempts to prematurely blow the thing up. You won't see the battering ram again, which makes that level all the more memorable. And guess what. They're all memorable. 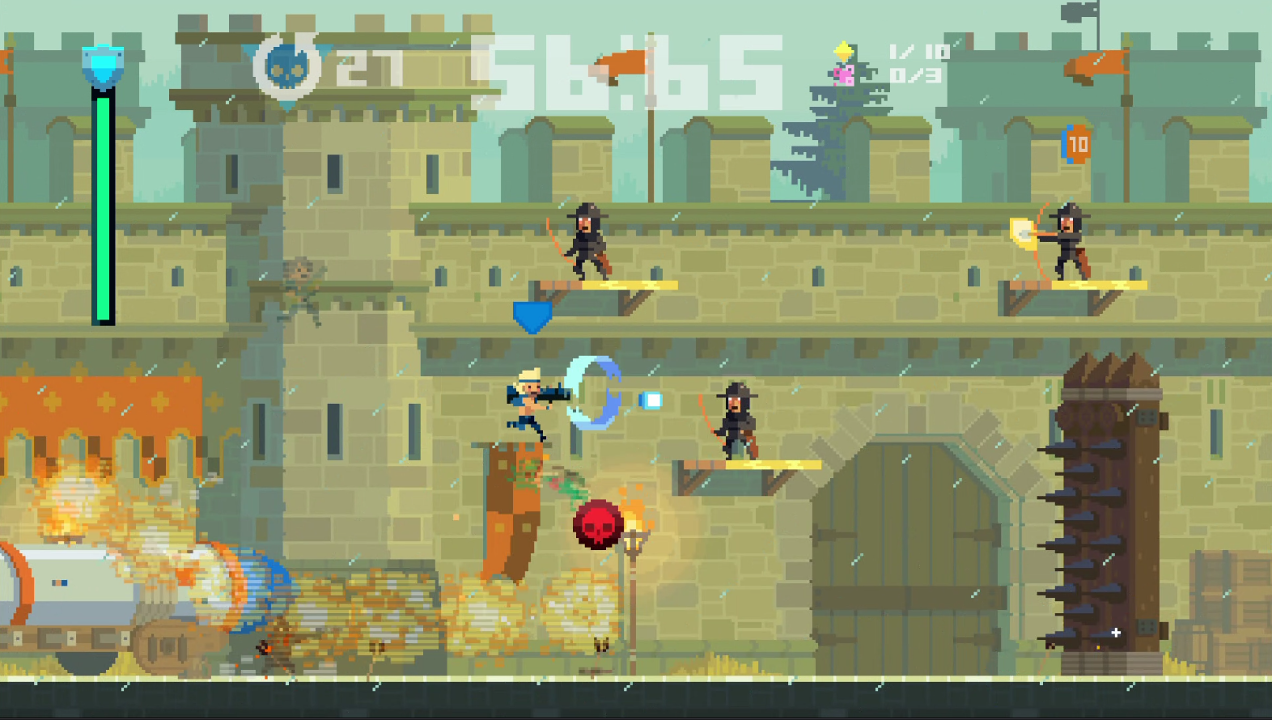 Chief among your future happy memories are the boss fights, which admittedly follow a similar pattern, requiring you pile on the damage much as humanly possible in the shortest amount of time. Still, finding the right team members for any number of multiple phases and different attacks, in addition the blatant wackiness of these baddies, makes every one of them stand out.

And the best of them, of which there are three or four, require that you spread your incarnations across the battlefield to carry out multiple simultaneous objectives, say taking out bombs to prevent their future damage. Either way, the game's bosses are all a treat and enhance the core gameplay in the best way. 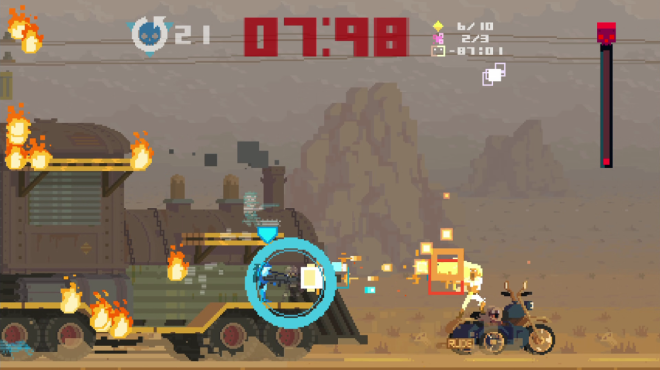 Presented with a sophisticated 8-bit aesthetic, I'm reminded of how Disney approached mashing its many characters into one style for 'Disney Infinity.' Capybara found a style that weaves all these moments in time together, and then exaggerated that style as much as possible. Every level takes you through some absurd scenario based on whatever era it's supposed to take place in, the pixelated enemies and environments strung together with the subtlety of stand-up comedian at a poetry recital. Which means that flying atop a massive pterodactyl while being chased down by an asteroid isn't the most preposterous thing you're going to see.

Tonally, 'Super Time Force' does no less than embrace the maniacal nature of its leading mechanic, tossing out any semblance of seriousness for scattershot, often satirical humor and utter ridiculousness. That sentence applies just as equally to the writing as is does the visuals, and embracing the nonsensical for both was the perfect choice. How else could you mash a skateboarding dinosaur with Merlin? 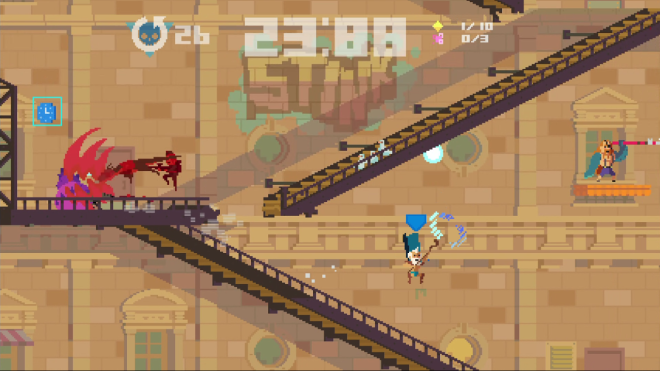 The chiptunes match the pixelated stuff as well as any game built on the backbone of the industry's earliest matching styles, but you won't be hearing any music tied to an era in a way that a time-traveling game might take advantage. The music is light, energetic and, of course, a little crazy, but no far stretch from what we've heard before. It almost feels a bit like EDM seeping its way into a NES game, which may be a bit of a redundant statement, but there seems to be a pounding rhythm in any of the game's tracks. At the least, it keeps you trekking along at a frantic pace.

This is an undeniably short game, but every moment really does count. My first runthrough of the game, during which I didn't stress over collectibles or any other factor of 100 percent completeness, took me about six or seven hours. From there, however, is a Super Hardcore mode that requires you save a character before you can use him/her again in a level. There's an added sense of preciousness that encourages more calculated play. It's a great way to play after you've mastered the anarchy, especially since that anarchy isn't all that difficult to master, plus it allows you take better advantage of some of the late-game character unlocks.

The game is never very hard, with only a couple of bosses really testing my time-jumping mettle. I'd either run out of time or run out of character spawns, but I never had to play a level more than twice. That said, no level falters in being engaging and encapsulating. I'll be going back to find new characters (of which there are a surprising many), collect glorbs (which sometimes require skillful use of Time-Out) and shards, and earn every medal as much as I can. 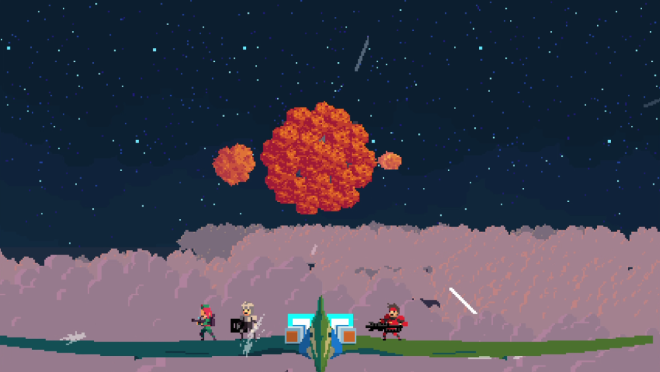 After finishing a level, players can call on the Xbox One's native recording capability with the "Y" button to save a level runthrough. It's highly convenient and marks the only difference feature wise between the Xbox One and Xbox 360 versions.

Online leaderboards and achievements round out the somewhat slim package.

As ‘Super Time Force’ slowly crawled towards its eventually release, I remember seeing a couple of different mechanical iterations during public showings. At one point, saving a team member was more integral to success, and at another you could only rewind a certain amount of time.  For many developers, indie or otherwise, one solid idea seems enough as the foundation for an entire game, but that game eventually suffers for the lack of follow through. Capybara Games made no such mistake, toiling over the finer details, delaying as they needed, to ensure ‘Super Time Force’ fulfilled tenets of surprising depth and ludicrous fun in a small but dense package.

Like a good book, not a detail in 'Super Time Force' is extraneous. Every member of the team has a purpose, every level designed and executed with clear intent, every moment bursting with the insanity of stupidly concurrent time travel. There's a great confidence in the execution of a simple but clearly fruitful idea here, a confidence matched in its many successes. 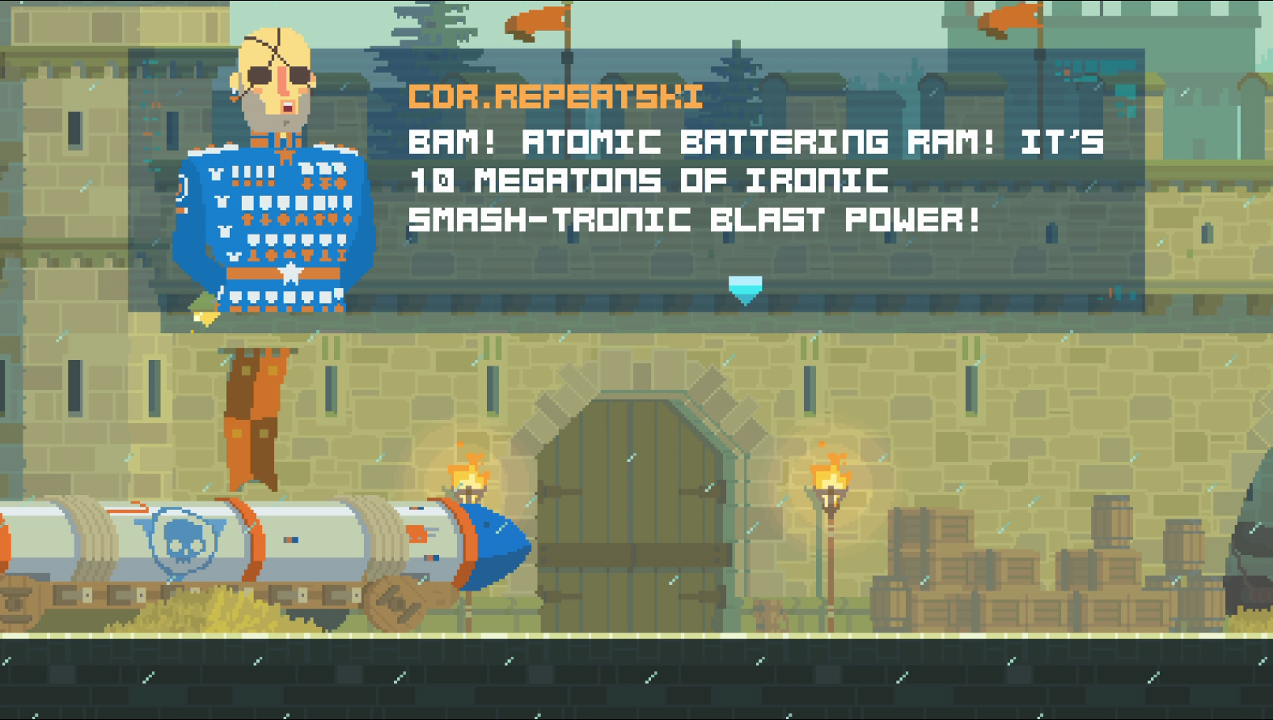