The Game Itself
3 Stars
The Video: Sizing Up the Picture
1.5 Stars
The Audio: Rating the Sound
3 Stars
Replay Factor
0.5 Stars
Bottom Line
Worth a Look

Before garnering critical acclaim and Game of the Year buzz with ‘The Walking Dead,’ Telltale Games was a company with the reputation of releasing modern day incarnations of such popular properties as ‘Monkey Island’ and ‘Sam & Max.’ In 2011 though, they would make a big leap forward in the point-and-click adventure genre with their four-episode approach to the ‘Jurassic Park’ franchise. Wisely set between the events of the first film and the arguably disappointing sequel, ‘The Lost World,’ Telltale’s ‘Jurassic Park’ focused on the ‘little people’ of the failed genetic theme park and fascinatingly kicks off the story in media res, as an unnamed character frantically evades predators, all while struggling to maintain her grip on a very familiar can of Barbasol. Over the course of the game’s four episodes, players gain the opportunity to ‘control’ a unique cast of characters, often jumping between them at a moments notice to complete a series of tasks. Reviewing this game three year after its release provides the unique opportunity to revisit one of Telltale’s more overlooked titles, especially in the wake of ‘The Walking Dead.’

The story of ‘Jurassic Park’ is most aptly described as a slow burn with players controlling both Nima Cruz (the game’s most morally questionable character) as well as Dr. Gerry Harding (JP fanatics may remember him in the film in a bit part as the vet responsible for the triceratops herd) and his teenage daughter Jessie (it wouldn’t be an outing at Jurassic Park without a teen in peril). As the game progresses into its second episode, the cast grows to include two mercenaries sent as a rescue team for the InGen workers as well as Dr. Laura Sorkin, the park’s only protectors of the dinosaurs themselves. I should caution that control is a very subjective term when it comes to gameplay as ‘Jurassic Park’ finds itself in a shaky middle ground between the familiar ‘point-and-click’ style of ‘Sam and Max’ or ‘Back to the Future’ and the more polished, nearly flawlessly cinematic ‘The Walking Dead’ entries. There’s no way to move characters around apart from adjusting the camera view and interactions with objects, which  consists of pressing the appropriate button on the gamepad to trigger a predetermined event. Dialogue is also present in the game, but more often than not conversations feel more atmospheric than crucial to advancing the story and unlike ‘The Walking Dead,’ I saw nothing remotely resembling a deeply branching and evolving tale. 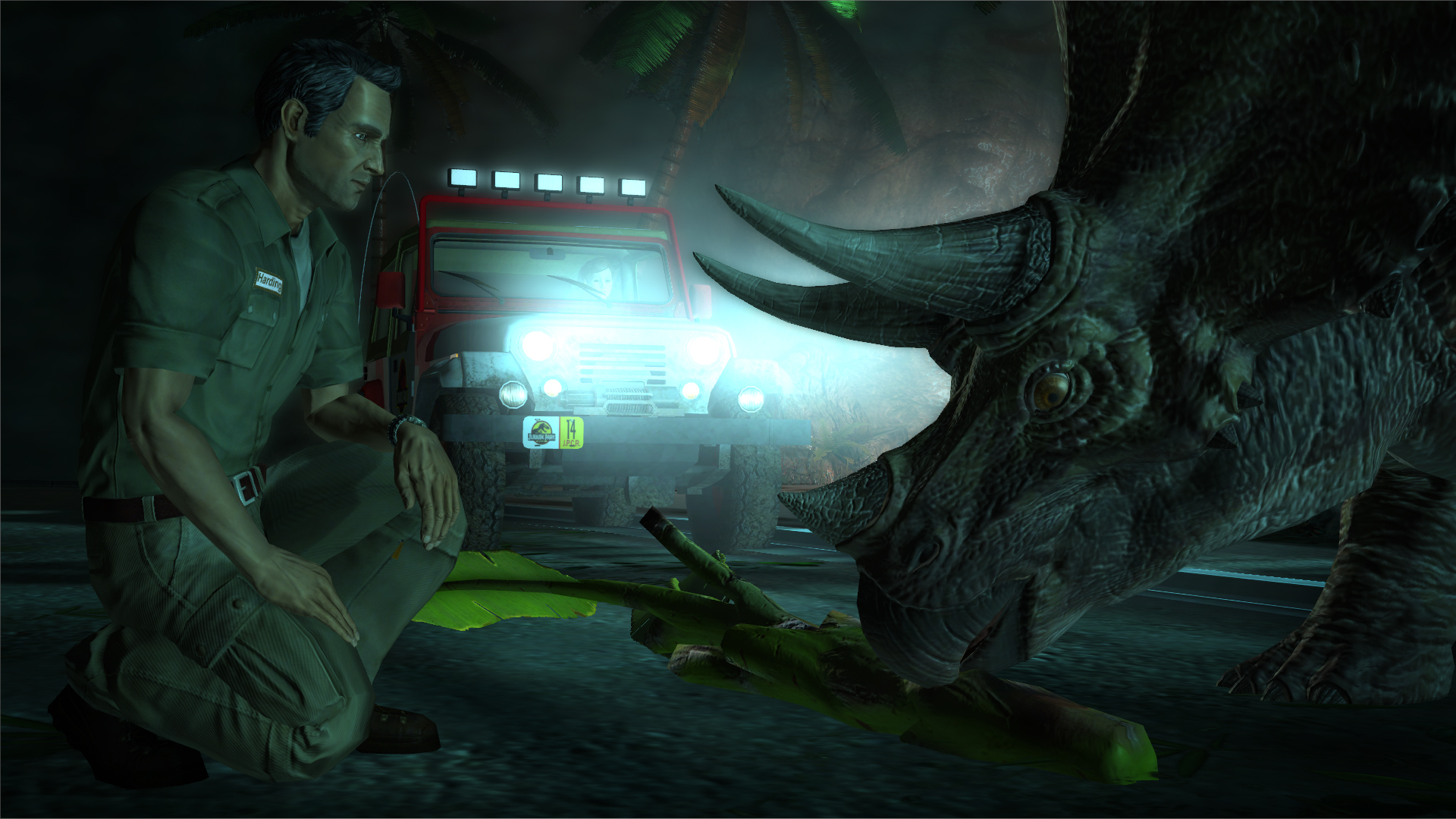 There are some incredibly action oriented moments as one would expect from a game set in Jurassic Park, but these are little more than various spins on the QTE event of the ‘Shenmue’ days with analog stick movements thrown in for a little variety. In the moment, it’s a primal, satisfying experience, but removed from the game, upon greater reflection, ‘Jurassic Park’ winds up being little more than a curiosity, somewhat bridging the gap between its cinematic counterpart and sequel. The story itself is enough to keep a player going for the roughly six to eight hours it might take to fully complete the game; the writing itself is inconsistent with the third episode in particular suffering from heavy plot padding. Characters begin to grate on the players’ nerves and I frankly found myself only truly carrying about one character in particular and the fate of the infamous Barbasol can. Still, I found myself having fun in the moment, even though a number of technical issues described below did their best to ruin the entire gameplay experience. Even as a product of its time, ‘Jurassic Park’ is just as so-so game, but when one realizes a lot of the ‘bugs’ were worked out here, it makes one appreciate just how much Telltale got things right with ‘The Walking Dead.’ 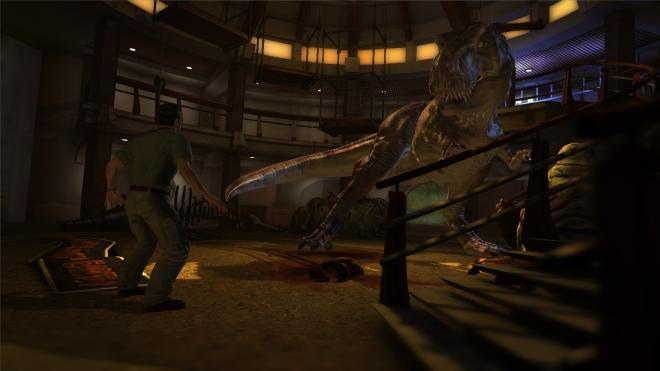 ‘Jurassic Park’ is a visually disappointing and technically incompetent game in almost too many areas to list. The game’s pre-rendered environments are passable, but never take advantage of the PS3’s hardware to anywhere near the fullest extent. Character models are a notch below in overall quality, often suffering from stiff animations, offering a look that doesn’t always convey the emotion the story aims for. To make matters worse the game suffers from incredible framerate drops at constant time throughout the course of the four episodes. It’s most detrimental when an action sequence kicks in and hurts the narrative when there’s a jitter or pause as the next scene or sequence activates. Quite honestly, it’s a nearly game-breaking issue that only gets the most marginal of passing marks due to the few strength’s of the game’s story, the relatively easy difficulty and the short length.

Audio wise, ‘Jurassic Park’ offers a similar experience to the movie. Atmospheric sounds work wonders when utilized properly and the dinosaurs sound convincingly creepy. Voce acting on the other hand is all over the place with the actors responsible for the Harding’s turning in grating performances. Nikia Futterman and Jason Marsden as Nima and Billy respectively do offer the most fully formed performances, but on a whole the tone is more caricature than realistic. In terms of creating an overly engrossing gameplay experience, the audio is serviceable at best with a few technical glitches (bad mixing, etc) just ever so slightly making their presence known.

While there are definitely two endings possible for ‘Jurassic Park’ players need only reload the final checkpoint to experience it. Following your first run-through of the game, the only replay comes from gathering what missing trophies are left, all of which focus on completing key action sequences across the game’s four episodes without any mistakes. In all honesty, I can’t see even the biggest ‘Jurassic Park’ fan wanting to revisit this tale once it has finally wrapped up. 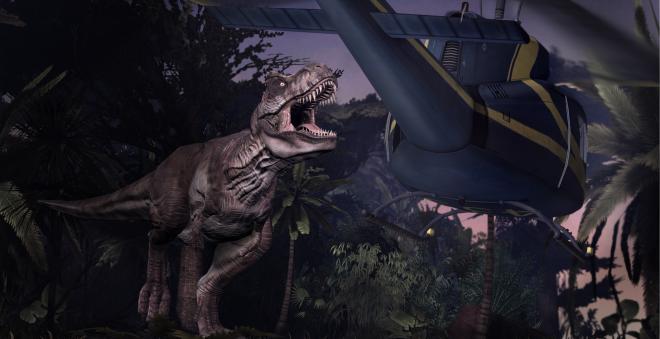 ‘Jurassic Park’ is far from a polished gameplay experience and its technical glitches do come close to sinking the ship before it sets sail, but as far as licensed properties go, it does its best to tell an original tale in a familiar setting. It’s a brief enough game and frankly, easy enough game, that should you be able to track it down for the right price, is a pleasant enough diversion for a few hours. It definitely shows that even a great company like Telltale doesn’t always hit a homerun, but again, looking at the game in a post-‘Walking Dead’ world, it's obvious they learned some solid lessons and put them to good use in future titles.