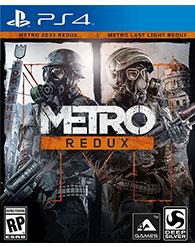 Brave the horrors of the Russian apocalypse - equip your gasmask and an arsenal of hand-made weaponry as you face the threat of deadly mutants, human foes, and the terrifying environment itself

Rebuilt and Remastered for next gen - with all previous DLC content included, new modes and features, and many gameplay improvements, this is the definitive version of the critically acclaimed series that fans and newcomers alike will enjoy

Two campaigns, and all DLC included - Metro Redux includes two complete campaigns that combine to create one epic adventure. With 10 hours of bonus content, that means 30+ hours of solo FPS gameplay just on one play-through

Two unique Play Styles : 'Spartan' and 'Survival' - approach the campaign as a slow burn Survival Horror, or tackle it with the combat skills of a Spartan Ranger in these two unique modes

Metro Redux is the ultimate double game collection, including the definitive versions of both Metro 2033 and Metro: Last Light, each rebuilt in the latest and greatest iteration of the 4A Engine for next-gen consoles. For the first time, console owners can expect smooth 60FPS gameplay and state of the art visuals that were once only available on high-end PC hardware. Newcomers to the series will get the chance to experience two of the finest story-driven shooters of all time in one vast package; an epic adventure combining gripping survival horror, exploration and tactical combat and stealth. Fans of the original games will find the unique world of Metro transformed with incredible new lighting, physics and dynamic weather effects, as well as a host of gameplay improvements and new features.