Digital copy reviewed for Xbox One. Note that this includes update 1.04, which Rockstar said would have some improvements for 'GTA: Online's' performance.

'Grand Theft Auto V' was first released in September of 2013 for the 360 and PS3. It was the first brand new GTA since 2008 (not including handheld spin-off 'Chinatown Wars') and the first game in the series to be set in Los Santos since 'San Andreas' nine years earlier. It sold a billion dollars' worth of copies in a couple of days and is one of the highest-rated titles of the last generation. It has now been released on eighth generation consoles with a slew of promised goodies, such as a first-person mode, new guns, critters, and other sundries, enhanced visuals, and more.

The essence of 'GTA V' remains unchanged from its previous iteration. In the campaign and multiplayer, the sprawling map of Los Santos (LS) and its rural northern environs play host to a huge amount of optional activities, many centered on driving and/or shooting. The single-player story has three protagonists, each with his own backstory, personality, and skills - Michael the retired thief, Franklin the ambitious repo man, and Trevor the aspiring meth lord with incredible anger management issues. During much of the campaign, the characters can be swapped out as the player wishes. The online mode lets players create their own characters and then embark on a criminal career of their own choosing. 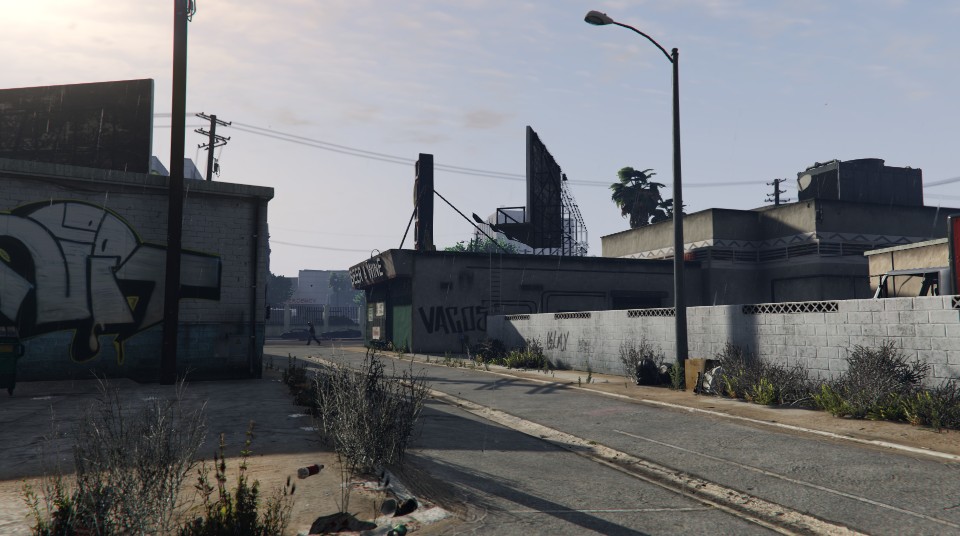 The game is set in Los Santos, a digitized version of Los Angeles. LS is full of people who are plastic in both body and mind. Many characters are self-absorbed, neurotic, degenerate, and in general a depressing portrait of humanity. It is here that Michael, Franklin, and Trevor band together to make their fortunes with violent aplomb, often through some sort of armed robbery. The story is highly entertaining and, despite the caricatures, satire, and over-the-top action, manages to achieve some level of believability, and is at least compelling at various high octane points in the story.

This is further magnified by the enhanced edition’s optional first-person mode. Far from tacked on, this mode is so well done that after an hour or so, it felt native. It changes the tone of the action from stylized, almost cartoonish, to visceral and personal. As an ardent FPS fan, this was surprising to me. I have played many a violent first-person game and not felt this involved since 'The Darkness' or even older homeless beating sim 'Condemned: Criminal Origins.' There are many new animations, several control schemes and options, and even granulated modes for walking and driving. For instance, I prefer the first-person mode on foot but a distant third-person camera when driving, as the hood and dashboard of the vehicle obscure the screen real estate and turn my already perilous driving downright shameful (although of course I did practice my windshield ejections). Cover can be used as the player wishes, switching automatically to third-person or staying as-is. FPS mode can take some getting used to, especially for a longtime GTA fan, but I love it and hope it becomes a mainstay option for the series going forward. 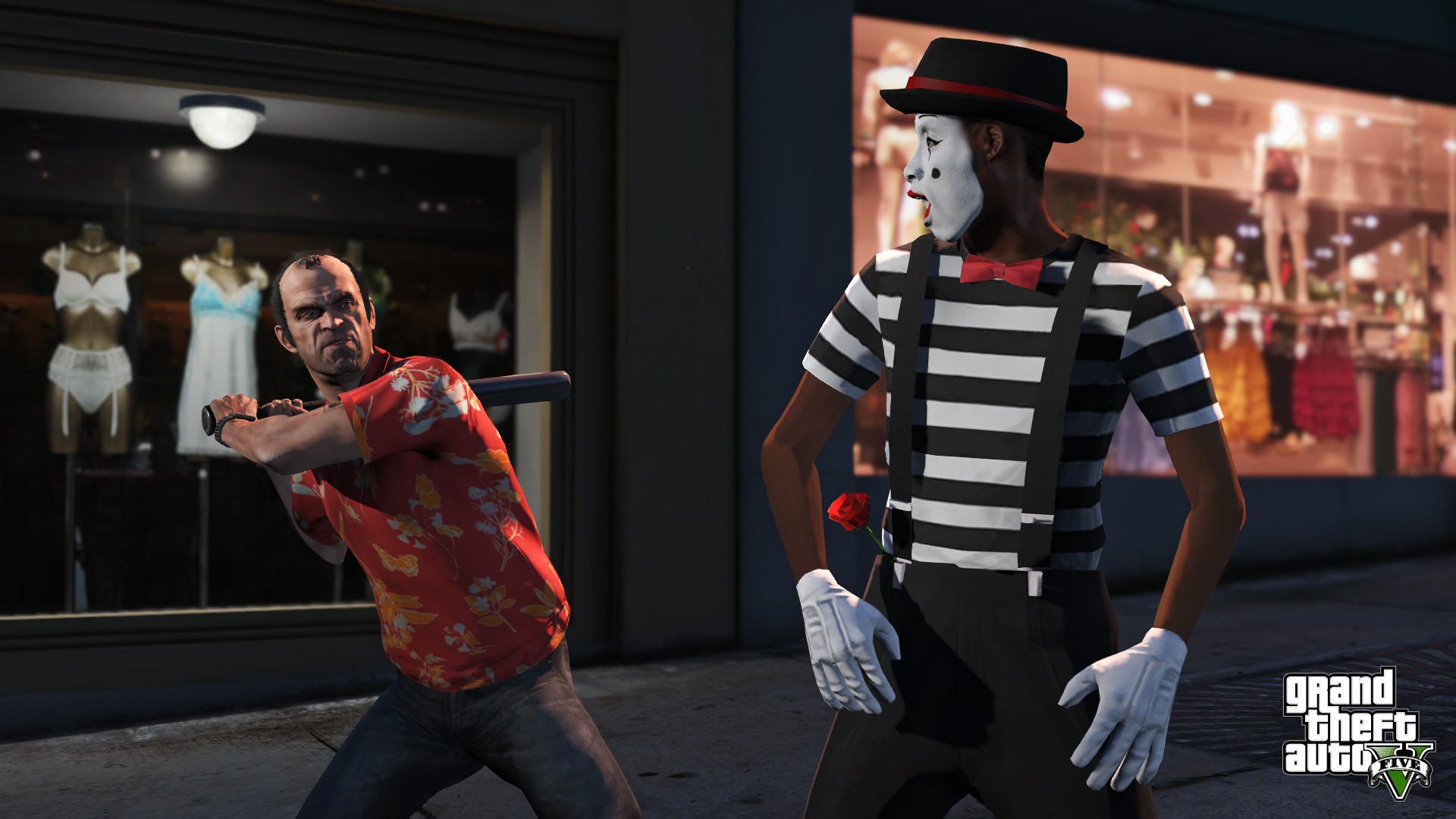 Other new features in the campaign are relatively small. There is a new collectible, the peyote plant, which temporarily turns the player character into an animal when consumed. A wildlife photo challenge, complete with new animals, can be completed for a reward of a submarine. A cryptic murder investigation can be carried out by Michael. There are a few new weapons and vehicles, like a rail gun and the Stallion muscle car. Additions to GTA Online include a larger roster of players (up to 30), all previously released DLC, and a character transfer from the last generation. All told, the gameplay elements outside of the FPS mode are pretty light, especially in the single player. 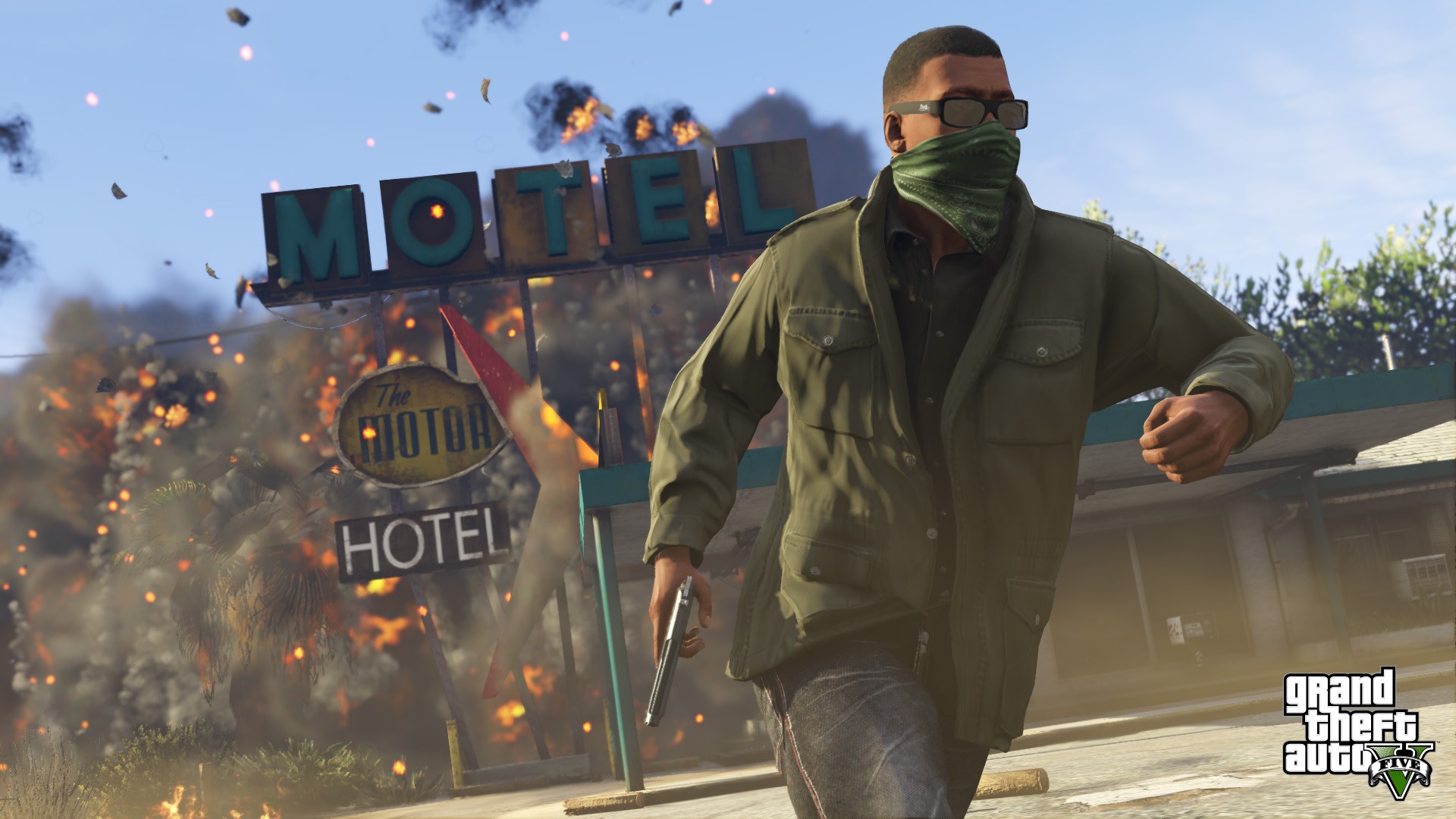 Rockstar took the opportunity to revamp 'GTA V' with stronger visuals. The differences are significant; more than a simple repainting. The low-hanging fruit is the resolution - it now runs on 1080p at 30fps, with only slight stutters during huge explosions and the like. Beyond that, textures have been reworked and additional layers added to the environments. Vegetation has been completely redone. Particle and lighting effects go hand-in-hand to produce realistic weather conditions. Color has been broadened and reinvigorated, and reflections and shadows are sharper and clearer. The depth of field effect is dramatic, but almost too much, especially in first-person mode where fuzz at the edge of the camera can be a liability. Despite this, Los Santos looks crisper and more beautiful than ever. 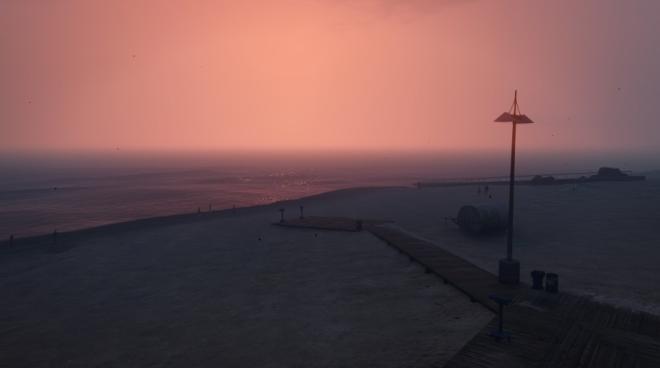 In the audio department, what was already a good soundtrack, with hundreds of songs spread across more than a dozen radio stations, has been improved with the addition of at least 100 new tracks. The distribution of the music across stations is more or less even, and many feature new commentary as well. The voice acting and sound effects are top notch, as is the dynamic score, even if the latter is overshadowed by the licensed music.

Any mission in the main campaign can be repeated through the pause menu, including many of the shorter side missions. Each one has a series of grades and medals that can be earned by completing optional objectives - scoring so many headshots, reaching a checkpoint in a certain amount of time, etc. This provides some entertainment, although many of the objectives can be maddeningly out of reach. The city provides lots to do outside of the campaign but some of its opportunities are handed out piecemeal, only after certain points in the story are met. 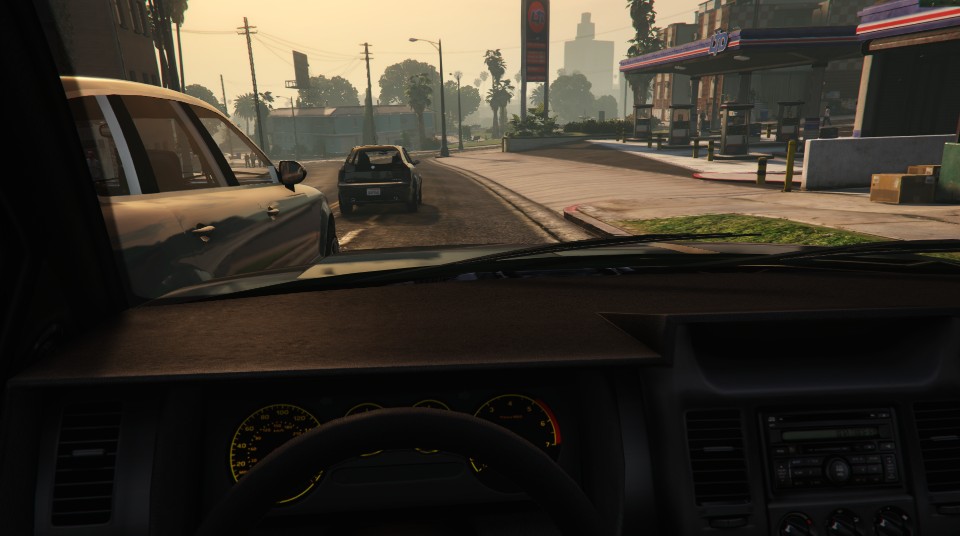 'GTA Online' did receive the content that Rockstar has released for the last-gen versions over the last year. This amounts to new jobs, weapons, housing, and other bits and bobs, but a big heist-shaped hole remains in the middle of it. Also, despite improvements to its infrastructure, 'GTA Online' just can’t seem to shake the bugs that it has been plagued with since its launch. Conditions have been improved considerably - on the whole it is playable now, for instance - but there are still long pauses and ponderously slow matchmaking. 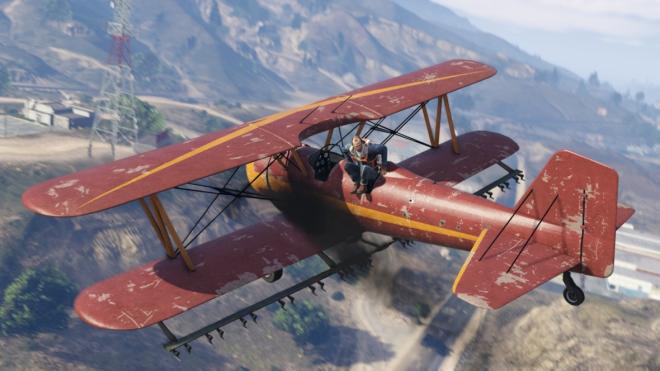 The next-gen variety of 'Grand Theft Auto V' is unequivocally a rerelease, increasingly common for the gaming industry. However, a notable amount of work and care has been put into its development, specifically with the first-person mode, and this makes for an even better 'GTA V.' As much as I appreciate the first-person mode, enhanced graphics, and other little things, this version is best for those gamers who missed last year’s release. It’s still one of the best games to be found on the Xbox One.