Xbox One
Worth a Look
2.5 stars The Game Itself
3 Stars
The Video: Sizing Up the Picture
4 Stars
The Audio: Rating the Sound
4.5 Stars
Replay Factor
2.5 Stars
Bottom Line
Worth a Look

Disc version reviewed. Severe multiplayer issues are noted in the review and in the score.

Master Chief. A simple two word military title, which up until 2001, was largely unknown to the gaming audience at large. Enter 'Halo: Combat Evolved,' not Bungie's first step up to the plate in the realm of the first person shooter, having broken ground with the acclaimed, but I'd argue still obscure, 'Marathon' series.  What was originally to be a Mac exclusive, turned cross-platform release, ended up being the face that launched half a million Xboxes (my own rough estimate given claimed sales figures). Since that initial game, the series has seen a steady release, every three years or so, with the exception of the timeframe hovering around 2010, wherein three tiles in the universe flooded the market. Of course, Microsoft has always had a growing degree of oversight on the mega franchise, and that oversight has seen the development transition from Bungie to 343 Studios and more recently, from the 360 to the Xbox One.

It's nigh impossible to try and succinctly make sense of the storyline of the series, but one figure remains a beacon throughout: Master Chief. For all the diversions and cross-media spin-offs, what brings players back to the universe is Master Chief (and personally, I'd argue Cortana). His saga, told over the course of four games, spanning over a decade, now can claim dominance on three consoles, with the release of 'Halo: The Master Chief Collection.'

While the original 'Halo' had already been remastered and re-released on the Xbox 360 and 'Halo 3' and 'Halo 4' were native releases to that console, 'Halo 2' remained the wild card; one of the only games to natively run backwards compatible on the 360, its origins were still firmly rooted in its original Xbox release. If there's one solitary selling point of this new anthology, it's the new anniversary version of 'Halo 2', remastered not for the 360 up-rezzed for the Xbox One; no, 'Halo 2' is remastered from the ground up for the Xbox One, and what a sight it is to behold. Let's not get too ahead of ourselves though, as Master Chief's story began a game earlier. 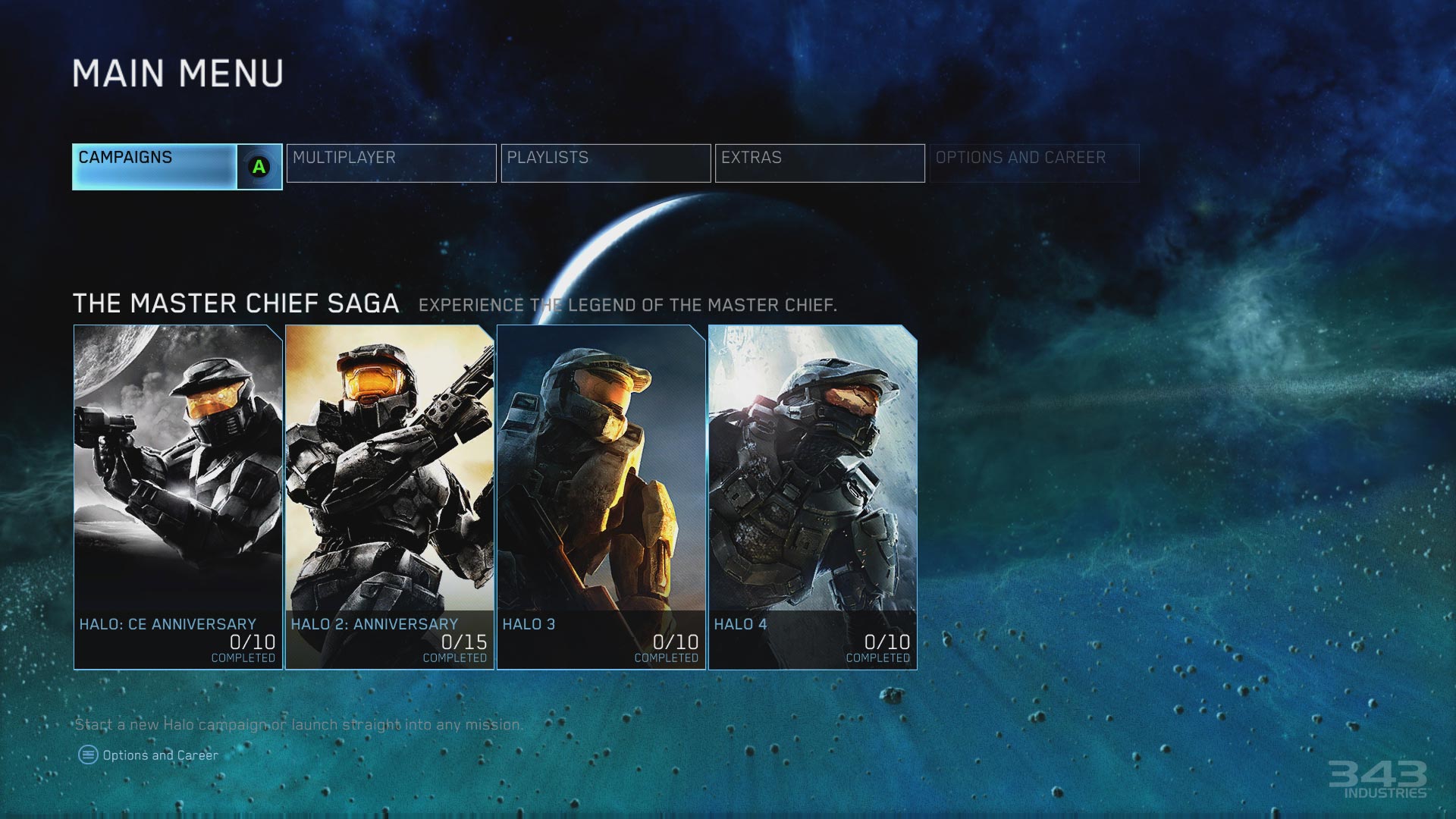 The target audience of this release doesn't need a detailed recap and breakdown of the series, so I won't attempt to provide one. That said, it's highly recommended gamers revisit (or in some cases visit for the first time) the series in order, in order to appreciate the evolution of the series, not only narratively and systemically, but from its parent, Bungie, to new keepers, 343 Industries.   'Halo: Combat Evolved' is the roughest of any title in the saga, but it's still well worth playing. The plotting and pacing of the story is a bit bloated and often-sheer numbers of enemies feels like a cheap substitute for more modern AI. Still, it's clear to see why the title original sold millions and the work done on the previous anniversary remake of this one is even more pronounced on this generation of hardware.

'Halo 2' may be the Holy Grail for some fans, but in purely objective terms, it's far from the best the series has to offer in all aspects. The fancy new HD visuals, from the in-game action to completely overhauled cutscenes is the selling point and a very strong one. When you get down to the campaign, there are still some thrilling moments: racing through the streets of New Mombassa annihilating Covenant soldiers, while hijacking new vehicles to continue your steady wave of destruction is a fluid piece of action any FPS should aspire to. What isn't so hot, is a story suffering from the opposite issue of its predecessor. 'Halo 2' is short and still ends on a cliffhanger. 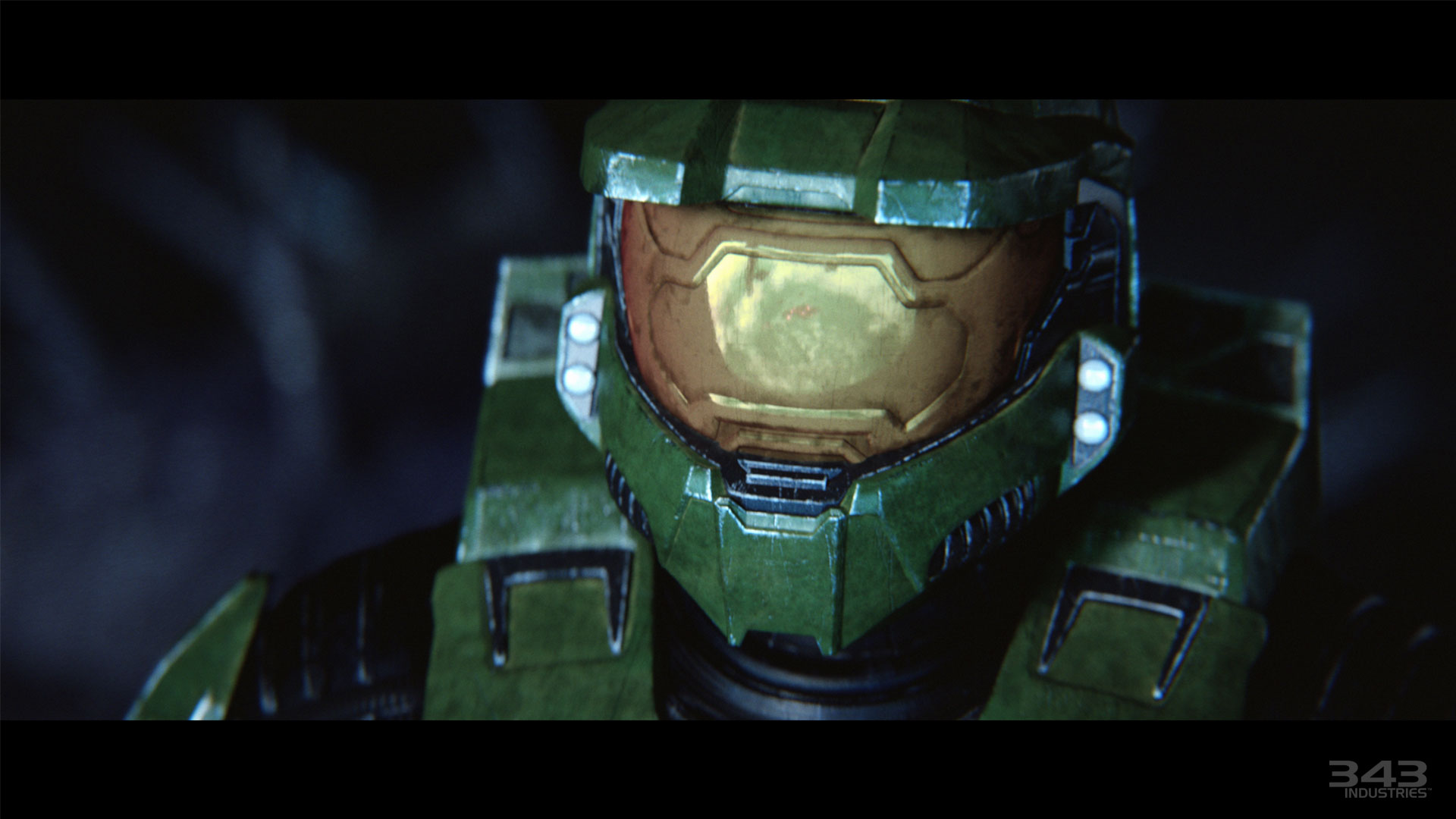 'Halo 3' and 'Halo 4' definitely hold up more steadfast in a post 'Modern Warfare' world. 'Halo 3' was a huge flagship title for the Xbox 360 and replaying it, there's no question why. It's a more fluid game than either 'Halo' or 'Halo 2,' even despite not pushing the 360 to its own limits. Its story is more evenly paced and sets an emotional tone that would carry out through subsequent titles in the series. 'Halo 4' is the most recent in the series and the groundwork Bungie laid out in 'Halo: Reach' really shines through in 343's first title. It's a pure sci-fi action epic that pushed the limits of its parent console and has much more breathing room on the Xbox One.

Simply being able to play 'Halo' and then jump into 'Halo 4' with remastered graphics in one sitting is reason enough to at least give 'The Master Chief' collection a look. It's rare to be able to closely examine the evolution of a series with such ease and despite the passage of time and advances in gaming technology, the Master Chief saga is still a must play and must replay. The only bittersweet aspect of the release, is it really is only Master Chief's story. As phenomenal as they are, I long for the opportunity for 'Halo: ODST' and 'Halo: Reach' to see a similar release, as both, narratively pushed the series forward and really forced 'Halo 4' to up its game in all aspects.

Here's where Bad News Barrett would feel right at home. Multiplayer. Truthfully, the real reason most will choose to pick this release up. On paper, 'The Master Chief Collection' should be the ultimate multiplayer experience. If the remastered campaigns weren't enough, the thought of being able to experience four complete multiplayer experiences, spanning 100 or so odd maps would only keep away the most cynical contrarians. Yet, 343 drops the proverbial griffball, hard. As I put the final touches on this review, the multiplayer system isn't up to snuff. 343 has already acknowledged major issues with matchmaking, going as far to restrict the options available to a few popular settings. I was able to get in a few matches, but only after waiting 5-10 minutes for a lobby to populate. In no universe is that kind of wait time acceptable. For that reason, I'm considering the multiplayer aspect of the game to be incomplete and penalizing the game's score as a whole, for now. When (I have full faith there's no "if" in the equation) multiplayer works as advertised I will revisit this review and offer a full rundown. Until then, 'The Master Chief Collection' is a product only operating at 50-percent full capacity. 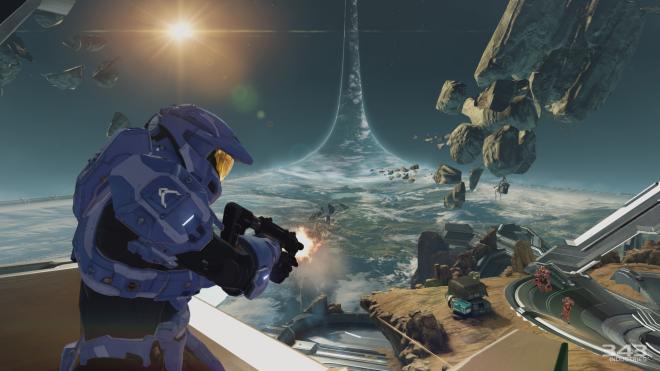 Visually, 'The Master Chief Collection' shows a steady evolution of graphics from start to finish. 'Halo 2' and 'Halo 4' looks the best of all the games here, both running 1080p at a steady 60 frames per second.  The graphical overhaul of 'Halo 2' makes 'Halo 3' look like a minor chump and is a definite upgrade over the 'Combat Evolved Anniversary.' Lighting effects are quite noticeable as are the high-res textures and completely redeveloped cutscenes. It still doesn't feel like a native Xbox One game, but its turn of the century console hardware origins are long behind it. (Unless you click over to Classic view that is.) 'Halo 4' is absolutely stunning on the Xbox One and everything about it that worked on the 360 works even better here. The higher res textures and output make an already beautiful game look almost like it was originally designed for this console. The steady framerates are greatly appreciated and the colors pop even more this time around. 'Halo' and 'Halo 3' both look good, definitely a step-up from the 360 (you can jump back to the original Xbox graphics of 'Halo' with a button press and the disparity is breathtaking), however both still feel firmly rooted in the last-gen of gaming. The real improvement here are slightly smoother textures and the definite upgrade in framerate. 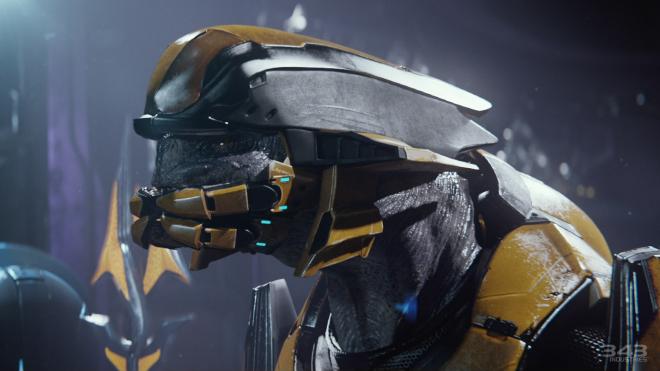 There was never an issue with the sound on any of the prior games, and that remains the case here. All four games sound amazing, with the pulsating guitar infused orchestral score remaining a common thread. Sound design is definitely more advanced in 'Halo 4' with great immersive use of surrounds and rich effects work. Voice work is top notch throughout. I'd really challenge anyone revisiting the series with this release to stop and appreciate the sound design: from the various covenant species to the unique tones of the games many vehicles, the 'Halo' world is truly a living, breathing entity.

The aforementioned multiplayer is what should make up the biggest weight of 'The Master Chief Collection's replay value. As it stands, since multiplayer barely functions, it's really up to the campaign mode and Halo Channel to keep gamers coming back for more. Long story short, the campaign is truly great and with the ability to play playlists of different series missions as well as some co-op abilities, even without a fluid multiplayer system at this point, 'The Master Chief Collection' has many hours of game play to offer. Slightly sweetening the deal is the Halo Channel an entertainment hub for all things Halo. Right now the big draw is the exclusive 'Halo: Nightfall' digital series, produced by Ridley Scott. One episode is up currently and once the initial "wow" factor of seeing series staples brought to life (Elite Zealots and all your UNSC hardware), there's not a lot of clarity of what the series will have to offer. The debut episode is purely tone setting and ends on a great cliffhanger, with the preview of the second episode looking like any one of the four games included here come to life. More importantly, 'Nightfall' serves as a bridge between 'Halo 4' and the upcoming 'Halo 5: Guardians.'

The last piece to make up the 'Halo: The Master Chief Collection' is access to the 'Halo 5: Guardians' mutliplayer beta in December. 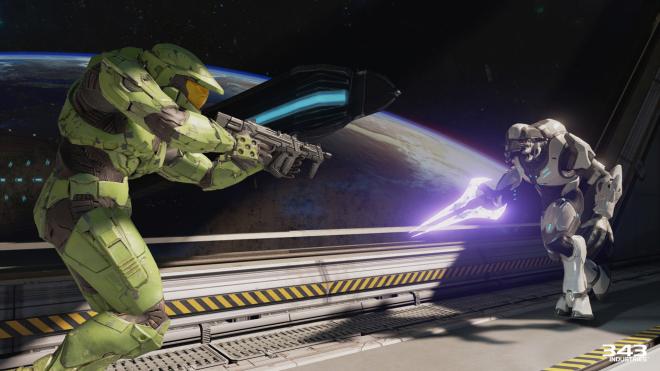 Once multiplayer is up and running without any sizeable hiccups, I easily foresee 'Halo: The Master Chief Collection' taking its place as one of the finest releases for the Xbox One to date. That said, it's a partially complete package sold to consumers at full price. As fantastic as the campaigns are, and as intriguing as the Halo Channel appears to be, I wouldn't necessarily say it's worth $60 out the gate. I intend to continually return to multiplayer in the coming days and weeks for two reasons: one I love the 'Halo' series and multiplayer experience and two, because like the game itself, this is an incomplete review. Once multiplayer has settled itself in a firm state, this review will see a complete overhaul and final ranking set in stone. Until then, 'The Master Chief Collection' is simply worth a look.