In a quiet college town, the Blob slowly plods its way across the landscape eating small household items, slowly growing in size before it consumes townspeople outright. No, Steve McQueen is nowhere to be found and this Blob isn't content with just dominating Earth as it sets its sights on a rocket to the Moon. All this and more resides within 'Tales from Space: Mutant Blobs Attack,' a game from DrinkBox Studios (of 'Guacamelee! fame) that garnered great critical praise upon its original release on the PS Vita a few years back. As with many other handheld successes, 'Tales from Space: Mutant Blobs Attack,' is making the leap from gamers palms to their big screen. Let's see if it was worth the wait

Set amidst a near timeless backdrop of what is most easily described as Anytown, USA, 'Tales from Space: Mutant Blobs Attack,' takes a very simple premise and attaches it to an even more simple approach to gameplay, and the result is something quietly magic. It's a magic that is obviously at home on a handheld, but does that necessarily make it a a concept that one would seek out on a console like the Xbox 360? The question is only heightened due to games like 'Angry Birds,' which are iconic hits on portable devices, but fail to muster up any real enthusiastic success on a console port, even with integrated motion controls. 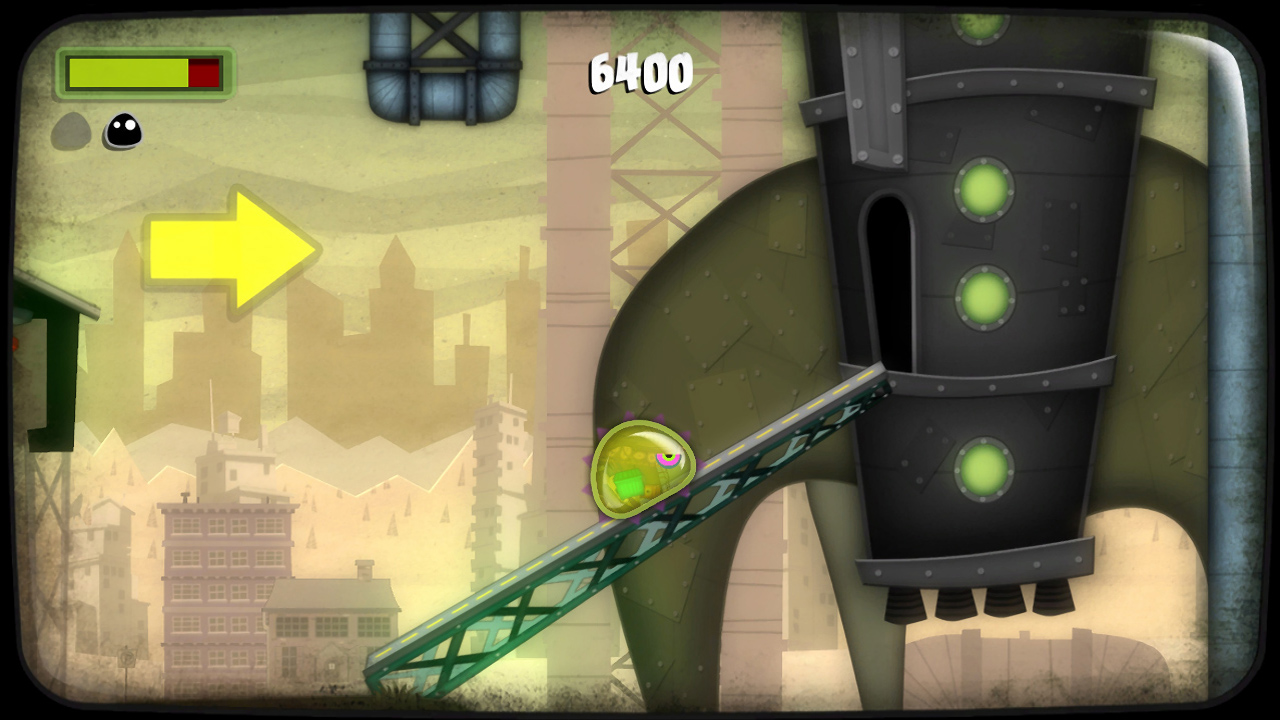 Taking a no frills approach to controls, 'Mutant Blobs Attack,' employs a simple 2D platforming based control scheme and implements it nearly flawlessly, allowing players to acclimate to controlling the Blob before adding the game's unique twists, a series of well-implemented special powers to the mix. As you traverse the levels from left to right and up and down, the Blob consumes random household items with the singular purpose of growing in size enough to eat a cork blocking your way to another part of the level or to an entirely new stage. It's not long before players discover the Blob's powers of telekinesis and magnetism, the former employed with the right thumb stick (and bumpers for targeting) and the latter a simple repel/attract mechanism utilizing the triggers. While it's all very simple in theory and honestly, execution, the game's levels force players to often use all the powers in quick succession to make it to the end of increasingly complex levels. 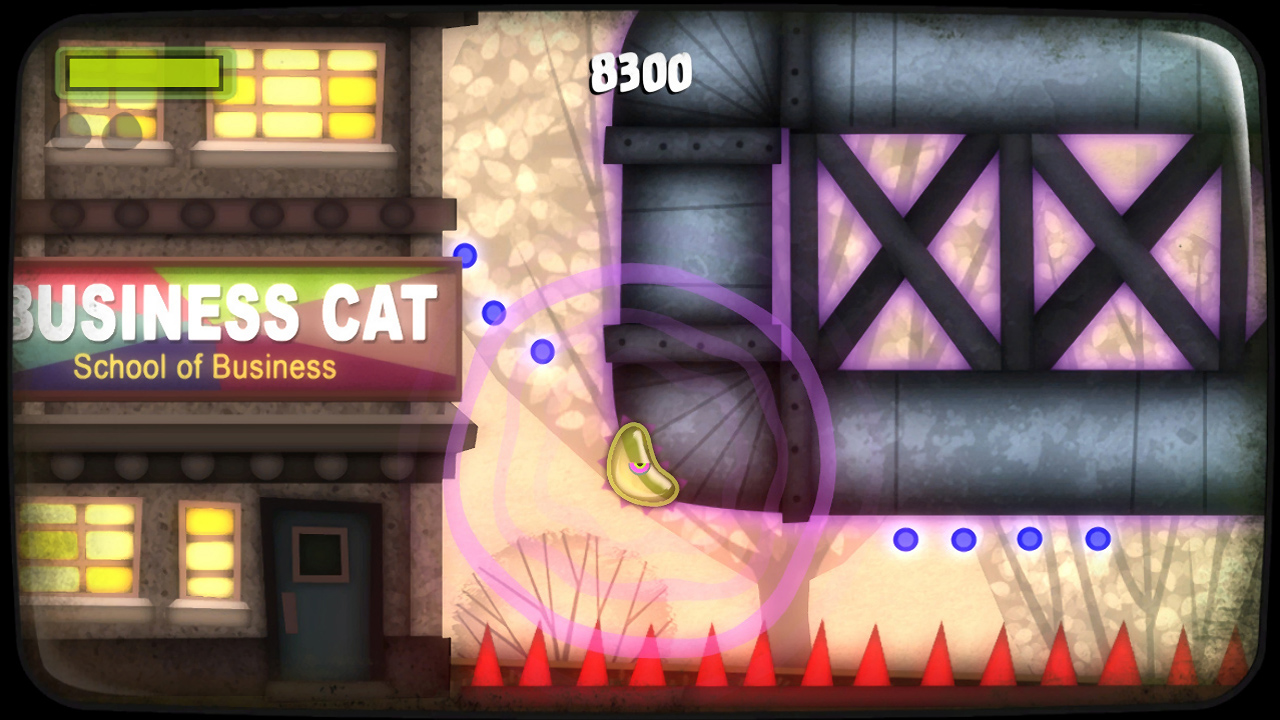 If there's a single solitary flaw to the entire proceedings, it's that the Blob's journey is a rather speedy one. While the game takes place over six thematic world's (stretching from a college campus to a giant metropolis), each world consists of four to six levels that on an initial run can all be tackled in well under ten minutes. What that equates to is a game somewhere in the ballpark of three to five hours; not long enough to wear out its welcome, but by the time players get a real challenge, they're roughly two-thirds of the way through. Add to that just the minimal amount of plotting to elicit a few laughs and make logic of the scenery changes, and you have a final product that depends entirely on gameplay and how funny you find references to internet memes (a lot of the game's backgrounds make not so subtle references to things as varied as Business Cat). 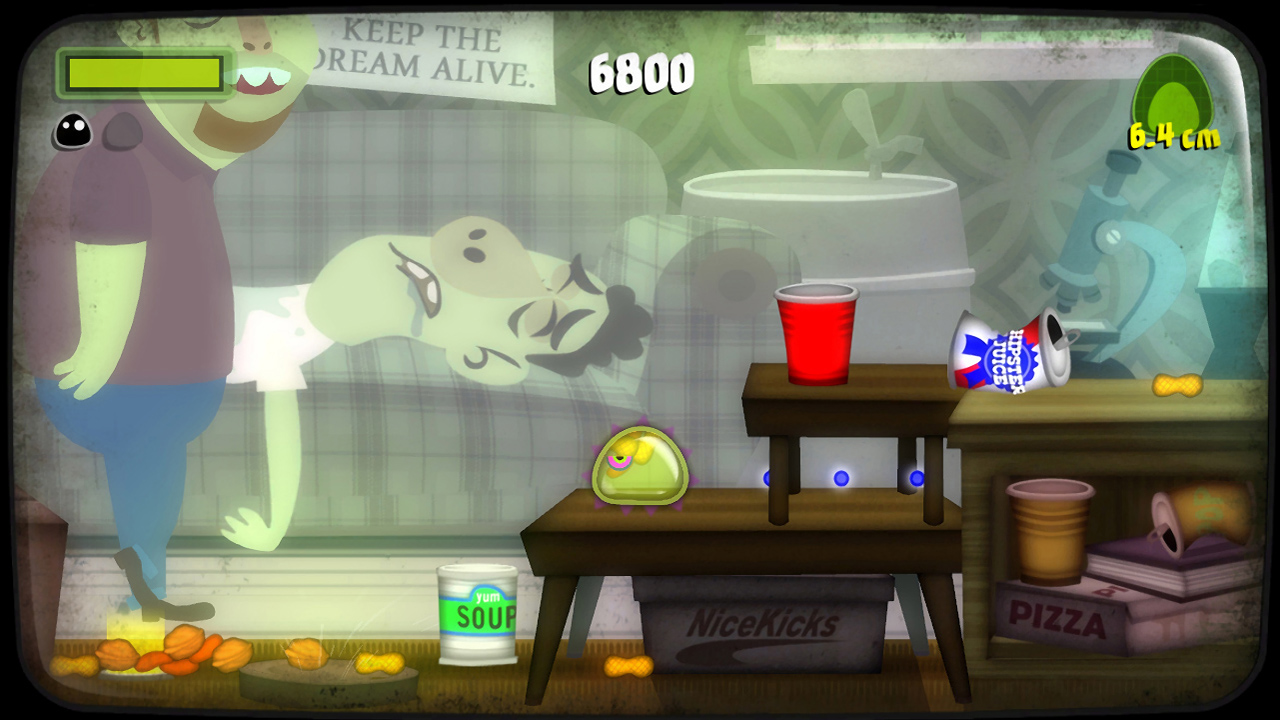 Fortunately, 'Mutant Blobs Attack' offers top-tier gameplay in the most unsuspecting of packages. The few hours you'll spend with the game on your first run are genuinely pleasant and elicit enough chuckles from the background gags that you won't mind the short length and actually be inclined to return to replay levels. The bottom line is, if a 2D Katamari Damacy-esque title is up your alley, 'Mutant Blobs Attack,' will fill that void and beyond. 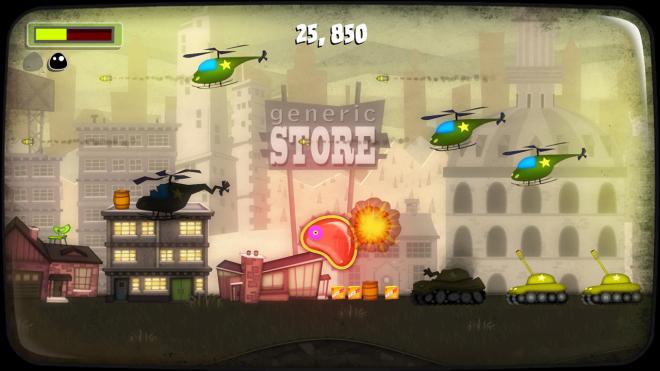 The game's graphics are incredibly simplistic, often evoking a top-notch indie flash game. The framerate is consistent throughout and not a single graphical hiccup was noticed. The art design won't be everyone's bag and even considering its origins on the Vita, there's nothing here pushing the limits of any hardware. Still, the animations are fluid and the overall aesthetic design is wholly consistent. 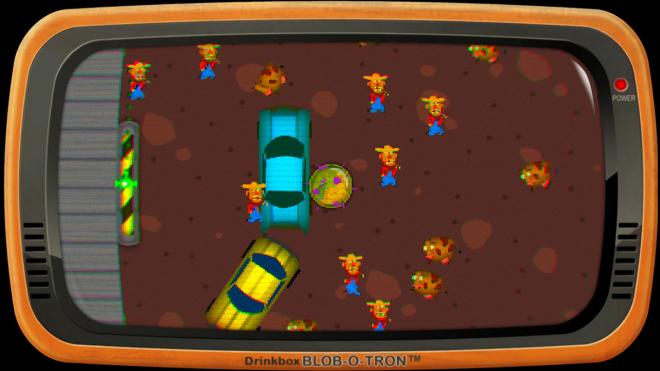 Like the minimalist art design, the game's sound offers little in terms of variety or upper-tier technical merit. The soundtrack is forgettable once you step away from the game and the limited effects palette is enough to give you that necessary aural validation of what you are doing with the controller is registering on-screen.

From a replay standpoint, 'Mutant Blobs Attack' is definitely worth an extra playthrough in order to obtain a gold medal in all the levels or at minimum save all your blob buddies (two of each hidden in each level). More importantly, the game's brief nature makes it the perfect time killer, something you can spend 30 minutes or so on and get some genuine enjoyment from, but not feel guilty about being unproductive for a quick stretch. 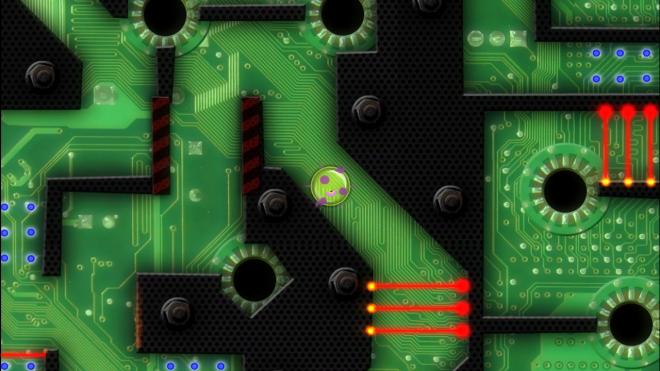 This Xbox Live adaptation offers gamers a unique spin on the classic 2D platformer, that often at times feels like a slick riff on Katamari Damacy, but in reality is much more. 'Tales from Space: Mutant Blobs Attack,' is the perfect blend of minimalism in a complete package that honestly feels more satisfying playing than some top-tier hardware pushing entries. The blend of quirky humor, pitch perfect controls, and generally solid timing, coupled with a reasonable price point, make it a solid addition to the collection of any gamer.