The Game Itself
3.5 Stars
The Video: Sizing Up the Picture
3.5 Stars
The Audio: Rating the Sound
3.5 Stars
Replay Factor
2 Stars
Bottom Line
Worth a Look

Since before the release of the prequelesque 'Batman: Arkham Origins' Warner Bros. has teased a single-player DLC episode, and before 2013 ended, the first details of 'Batman: Arkham Origins - Cold, Cold Heart' became public. Set for the New Year's Eve following 'Origins' Christmas, the teasers showed what looked like a Wayne Manor awards ceremony crashed by Freeze and co. After that, as with many odd aspects of the 'Origins' game, the DLC episode slipped, was cancelled for the Wii U, and only released after the hype train had started for 'Batman: Arkham Knight.' The episode represents the most ambitious DLC for the 'Arkham' series and stars a favorite enemy, and thus it's time to jump back into 'Batman Arkham Origins.'

Six months. That's the time between the release of 'Batman: Arkham Origins' and 'Cold, Cold Heart.' Even it's only been a few months since playing the original game, that's enough time to have forgotten the particulars of the combat system, or the general outline for missions, side quests, and even bosses. But much like riding a bike, it comes back quickly. 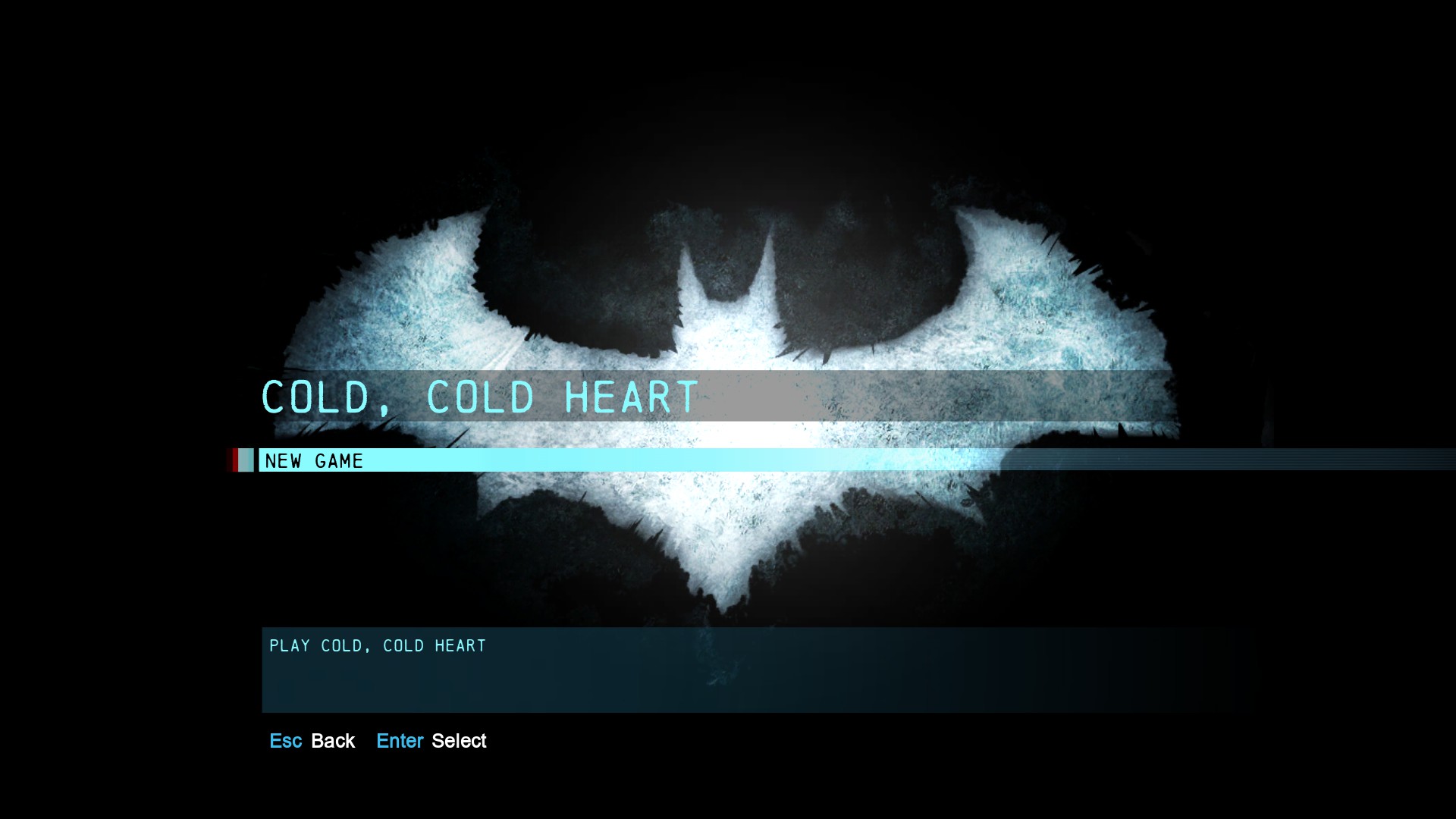 And that's where the trouble begins. 'Arkham Origins' offers players a myriad of difficulties, and it's a long game if you choose to pursue the side content. And yet, 'Cold, Cold Heart' is presented as a separate menu choice without any crossover with the base game's save progress. In essence, this means that anyone can pick up the new DLC and start playing regardless of their progress in the main game even though they the story picks up after. Unlike the main game, the DLC episode has no difficulty settings, and this presents quite a few issues.

A long, pretty cutscene establishes the DLC's beginnings, there's a new character in town, Ferris Boyle. He's a tycoon type, but his public persona has garnered praise for his philanthropic deeds. The new Batman/Bruce Wayne (remember this is 'Origins' prequel territory) respects this Boyle, and the Wayne Foundation is hosting a 'Humanitarian of the Year' award ceremony at Wayne Manor in Boyle's honor when things turn cold... explosively cold. 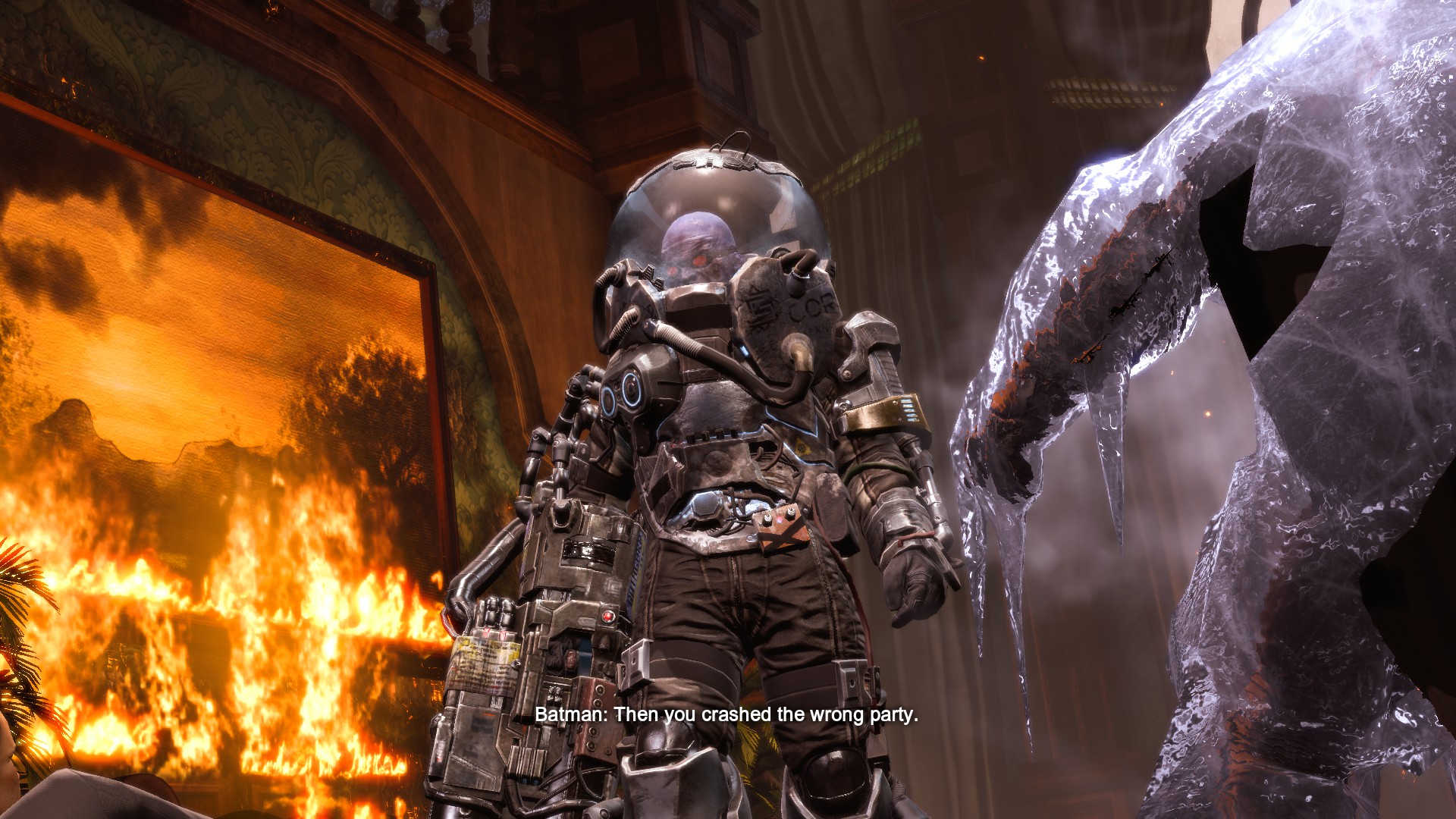 Yes, a new to Batman Mr. Freeze has come to the party. I was really intrigued by the idea of playing Batman against villainous types inside the Wayne Manor, but instead it's really a quick refresher/ tutorial on Batman/Bruce Wayne's basic movements before heading back to Gotham. Making my way to Batcave, both Alfred and Batman know that I need a new Batsuit, the XE (thermal suit), but it's not finished yet or something. What follows is playing the majority of the DLC wishing the suit was ready. 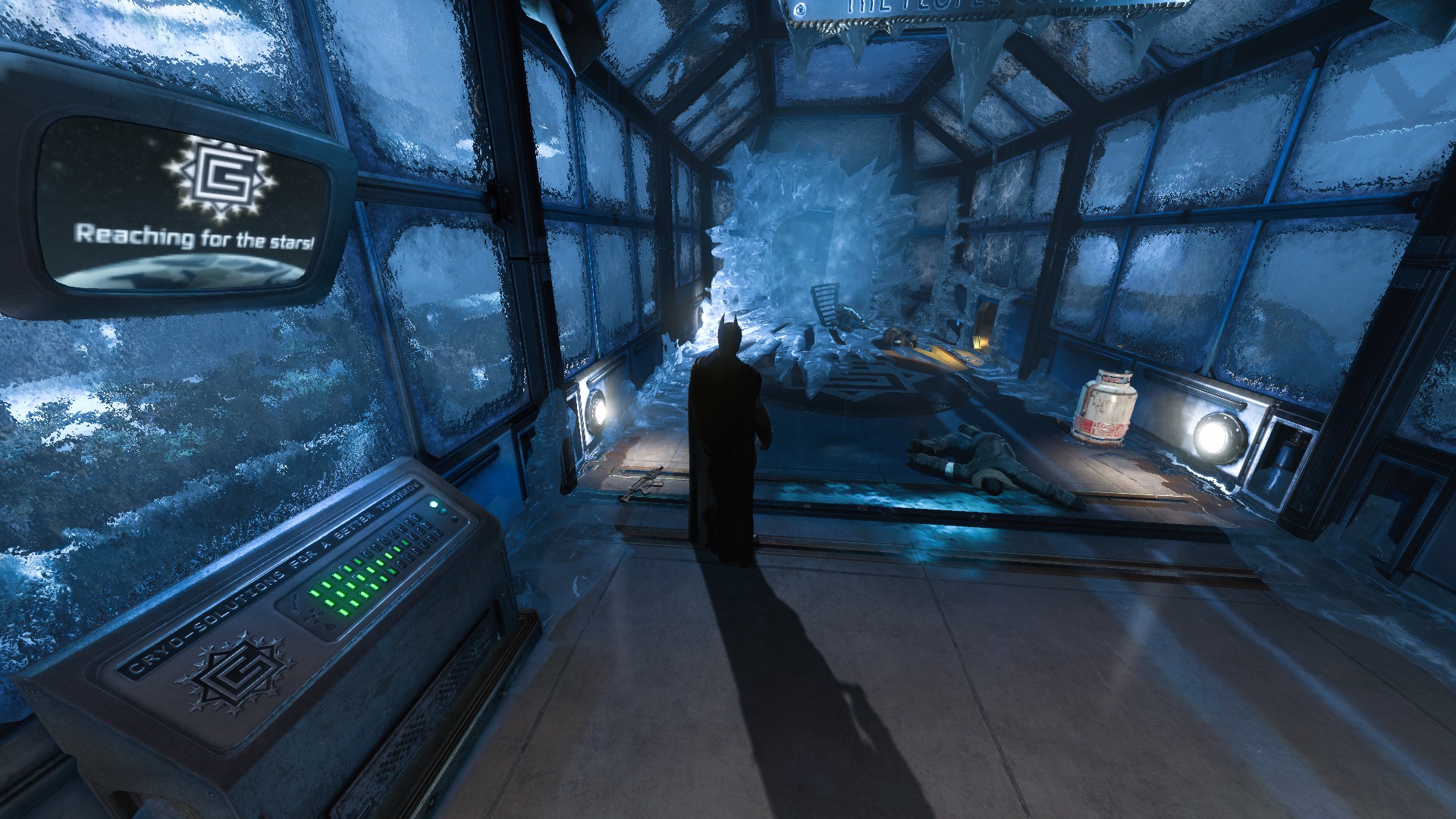 This DLC being about the origin of Mr. Freeze and the first altercations with Batman, cynical fans won't be surprised by the high Penguin quotient. Unfortunately, Penguin and his minions stand in for any kind of Freeze associates, but there is a new enemy type, a penguin thug with a freeze gun. The freeze gun comes with a large pack and body armor, and these guys are a pain to deal with. 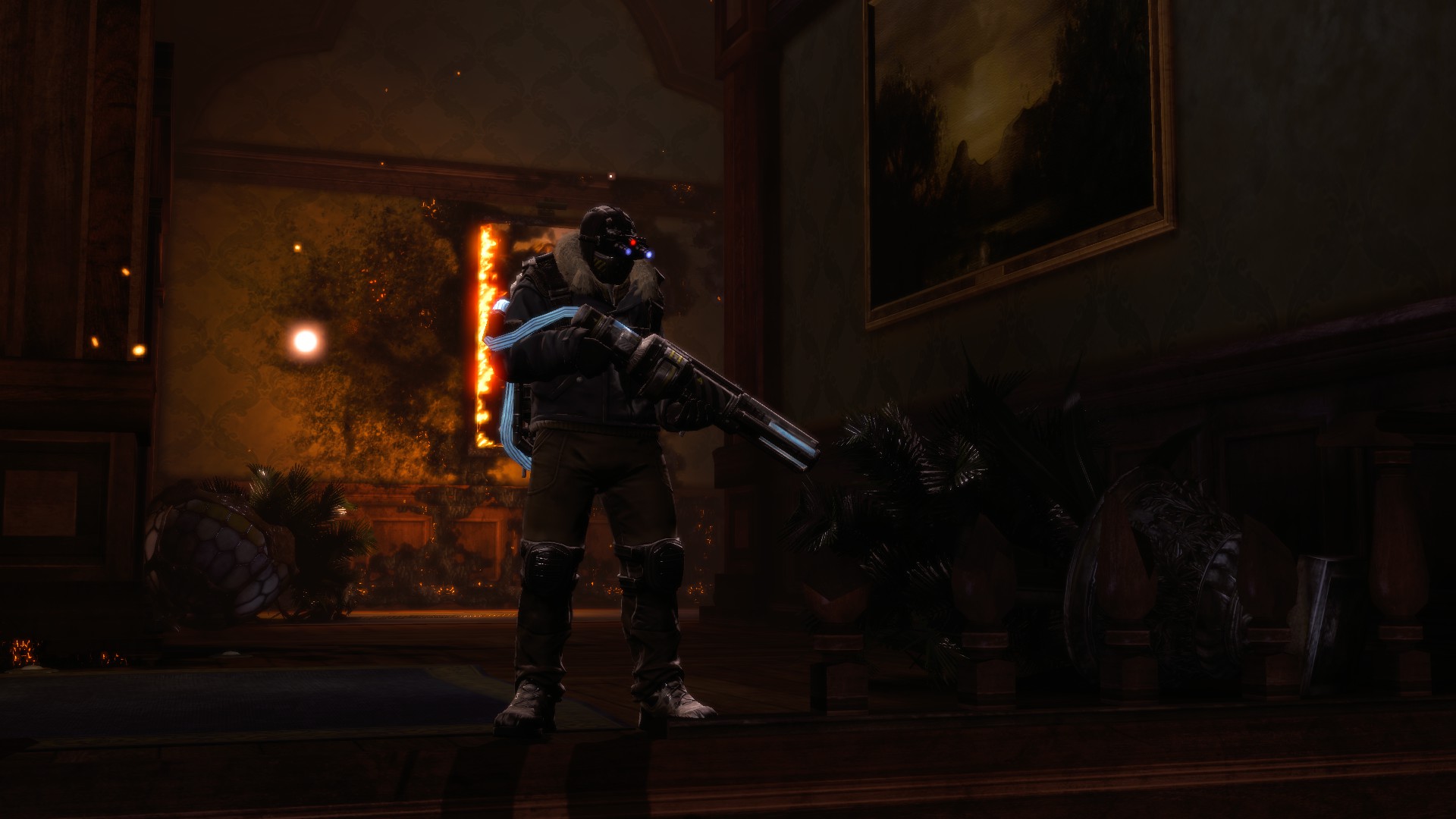 The DLC lacks almost any kind of level progression. You basically start with the full 'Origins' arsenal, minus the glue grenades. Once you get the XE suit and thermal gloves, Batman's toys take on ice-fighting properties. For me, this means that the shock gloves (which are swapped for thermal gloves) from game are finally really necessary as it can be very tricky trying to take down the freeze gun guys. If they hit you with a freezing shot, they follow up with grenades. The few moments it takes to break out the ice may still leave you with serious grenade damage, though I bet hardcore players will find the one-size-fits-difficulty too easy.

The game is limited to a sub section of Gotham, and it's design echoes the main game. There are side quests like dealing with annoying Anarchy followers and freeing frozen cops, which can't be completed until the main story progresses and the thermal gloves are obtained. 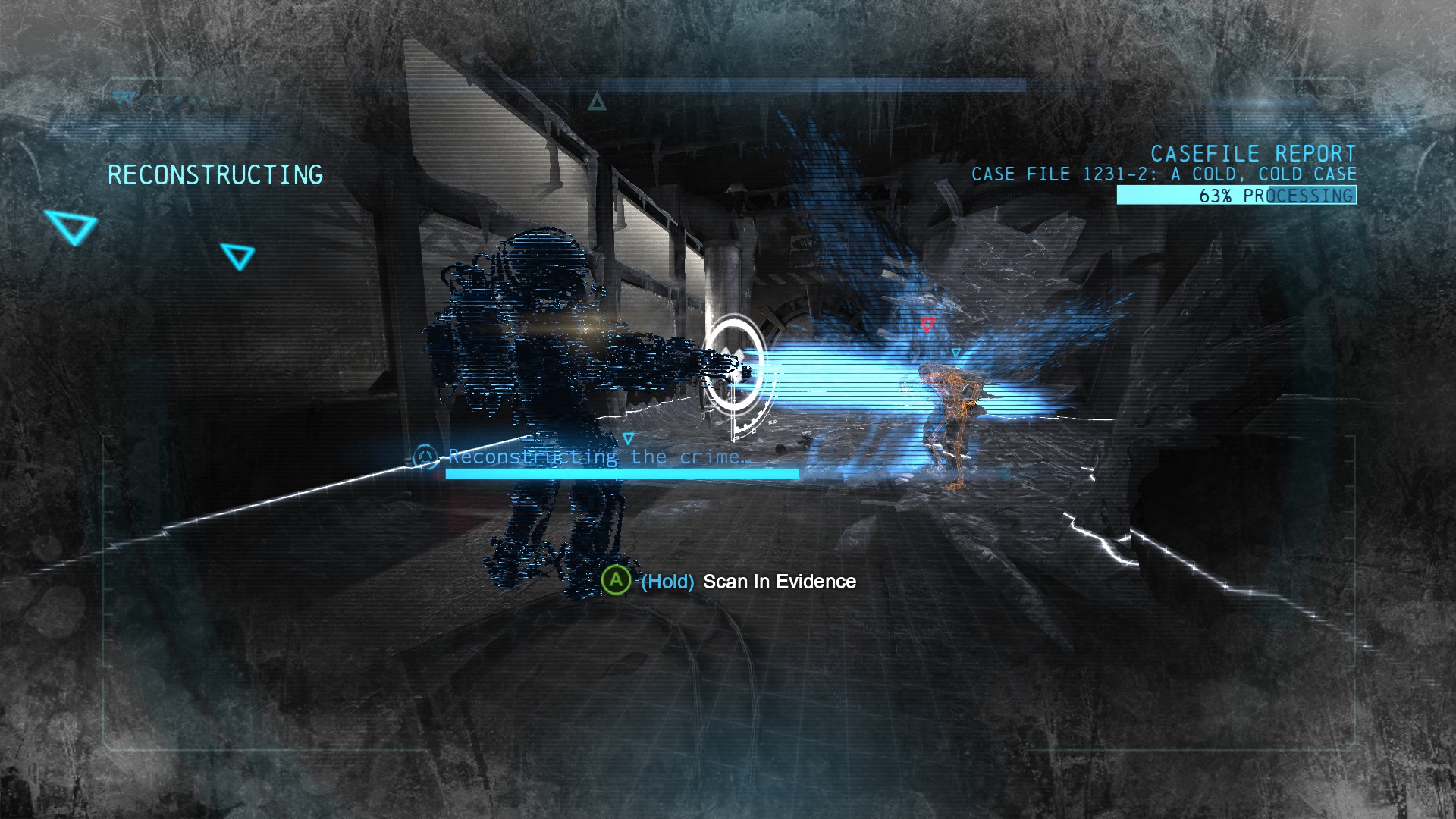 There are a few crime scene reenactments through which Freeze's origin is played back. The best thing to note here is that it doesn't involve the Joker. 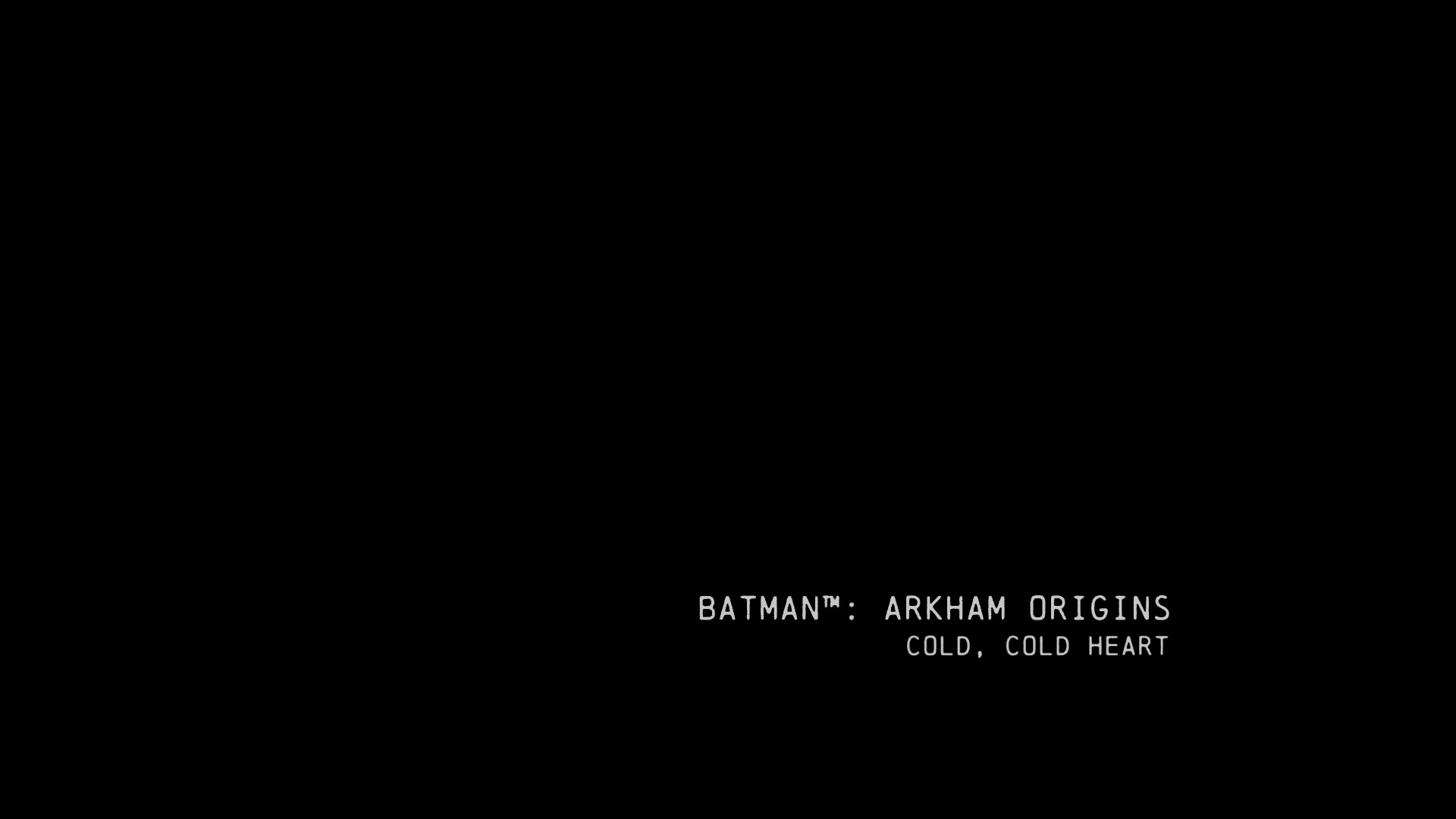 The lone boss fight is one of the better 'Origins' fights and is quite similar to the stalking Bane fight of the main game. A few hours, a few areas, and the typical single player DLC emptiness. 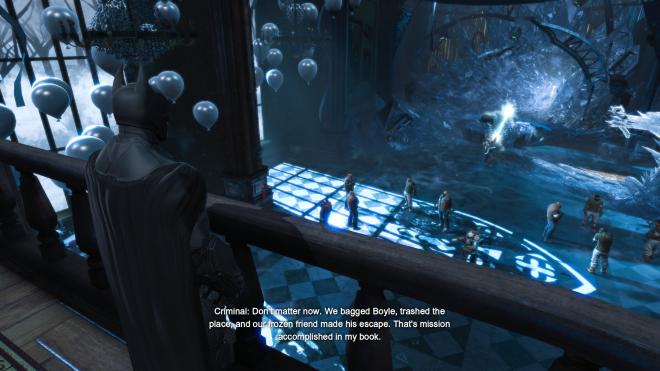 Frankly, the visuals are on another strata from 'Harley Quinn's Revenge' just by virtue of having some new art assets. The new Batsuit is very sharp even if it continues the confusing "this a prequel but Batman's gear is more advanced" idiosyncrasy. Still, this is DLC, and the lack of polish is quite evident in places. Like the original game, the full range from impressive to temp-looking is in full effect. This isn't Gotham in summer though, and much is just inherited from the base game. The in-game cutscenes are really wooden, especially when involving characters in solid ice. Didn't this team learn anything about sprucing up dialogue exchanges from the 'Mass Effect' games? 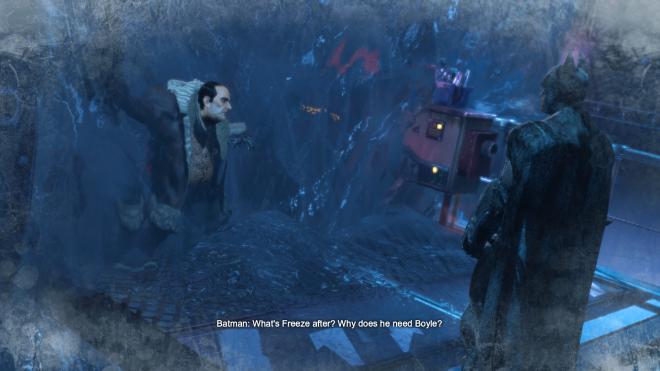 I think I underrated the original game's Audio simply because it felt so uniform, which isn't such an issue in this short DLC episode. Freeze isn't around to speak very much as Batman is usually one or two steps behind, but when Freeze speaks, it works. Penguin and his thugs are a little played out, but I have to give it to Alfred, his physical bounce back is almost as good as Batman's.

If the goal was to outdo 'Harley Quinn's Revenge,' then mission accomplished. Otherwise, the DLC's side content just feels perfunctory, and I can't imagine replaying the DLC just so that I could walk around going "I really wish those thermal gloves were ready." The bit with the cryodrill just means more facing off with freeze gun guys. 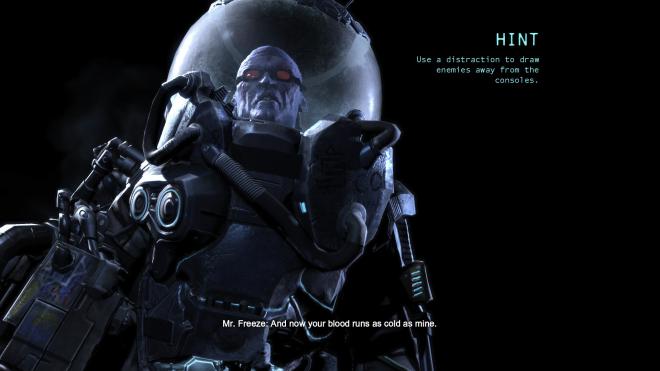 I had high hopes for 'Cold, Cold Heart' when it was announced, but actual DLC is all-too typical, though it seems to be a big improvement when compared with 'Batman: Arkham City's Harley Quinn's Revenge.' Still, it exhibits the same problems as 'Origins,' it promises the first clash between a young Batman and Mr. Freeze, and instead gets hung up on trying to be an openworld game full of uninteresting Penguin thugs. The combat is challenging without being varied, and should have had difficulty options. It's almost a shame that this isn't a cheap standalone game as it might be more fun for those that missed 'Batman: Arkham Origins.' Otherwise, it's really only worth playing for the completionist or for those curious about a second 'Arkham' Mr. Freeze appearance.