The Game Itself
4 Stars
The Video: Sizing Up the Picture
4 Stars
The Audio: Rating the Sound
3 Stars
Replay Factor
4 Stars
Bottom Line
Recommended

Each year a handful of games standout across the different consoles with Madden usually being on the top of the list. After celebrating their 25th anniversary in 2013, EA Sports looks to piggyback on Madden 25 with a few tweaks and improvements being introduced to this year’s version. Defense appears an area of emphasis for what is already a solid foundation. Last year, EA Spots improved the offense and, following a defensive minded Super Bowl Champ, now turns their attention to the defense in the hopes of giving gamers a well-rounded and realistic experience.

Before last year, 'Madden' could never have been considered a favorite of mine.  It almost seemed to be second or third choice, falling behind other addictions such as 'FIFA.'  But last year I found myself putting down other sports games in favor of this addicting football franchise.  'Madden NFL 15' continues this trend.  After a quick orientation on the changes from last year I was quickly hooked and began racking up wins online.  Even before learning the ins and outs of the game, I was looking forward to finally playing Madden with Johnny Football leading my team to glory (hey, what can I say, the dude was electric in college). 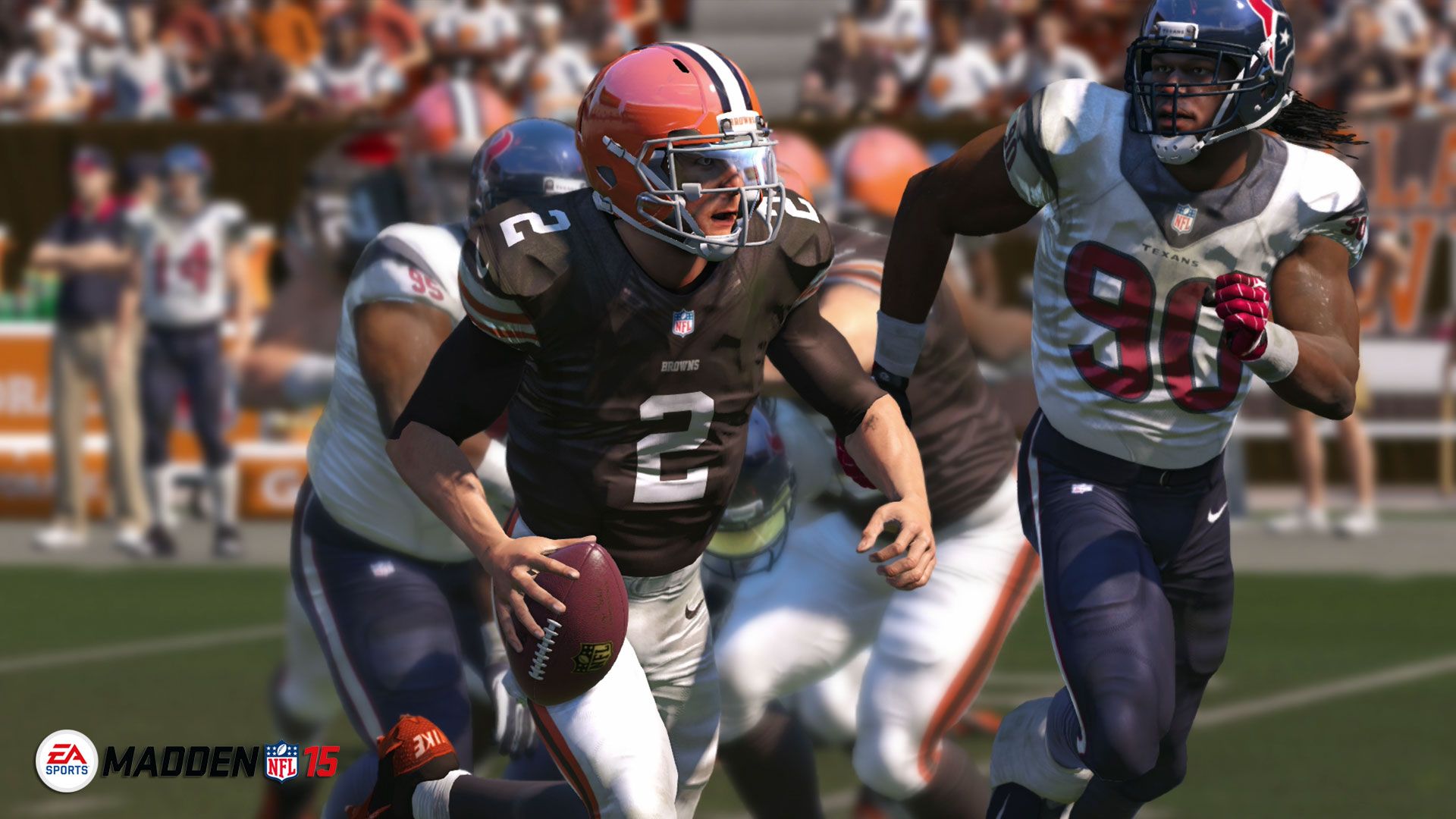 'Madden' is designed to cater to a wide ranging audience, from the casual gamer to the technical experts who purchase it every year. Loading up the game, the user is welcomed by crisp menu screens that are easy to navigate and give access to several of the game modes and areas to be discovered. While 'Madden' may be easy to pick up and play, becoming a pro can take some time. This is why the inclusion of the off season OTAs and training camp mode is crucial. The user now has an integrated reason to practice the drills and exercises that help refine the basic skills such as tackling and juking.  I spent a decent amount of time going through each section to pick up little tricks that might be able to give me an edge over my opponents. 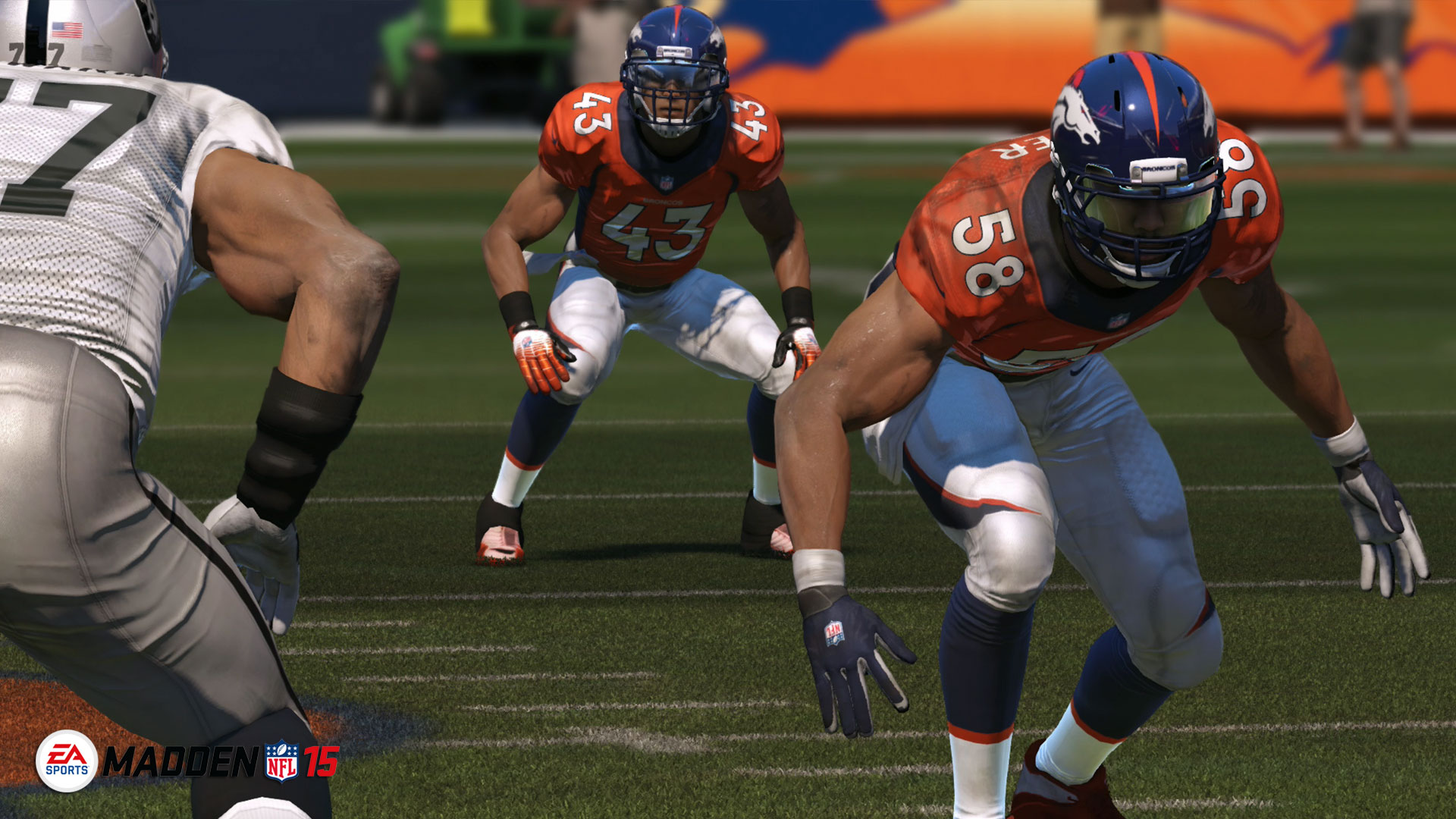 Moving into actual gameplay, Madden emulates last year’s release, but with better cut-aways, camera angles and overall game flow. What really stood out after a few games was the inaccurate passes by the QBs, which made the game feel much more realistic than the normal high completeion ratio that I was used to in previous outings. I like seeing botched passes that aren’t extremely over or under thrown, I mean Tebow is out of the league for a reason.

On the defensive side, EA adds a tackling cone to aid players in making the correct choice and to help time your tackle just right.  This is definitely an upgrade over last year's game and in fact is an entirely new way of handling defensive football play. Previouse iterations in the series relegated defense to just spamming the sprint button and then hitting tackle when you get close.  Now with the cone and minigames, the entire process of shedding your blocks, reading the gaps, and working with your fellow lineman seems connected to your actions and not just the stats of your players. A similar concept has been given to kickers and punters to predict how accurate they will be. 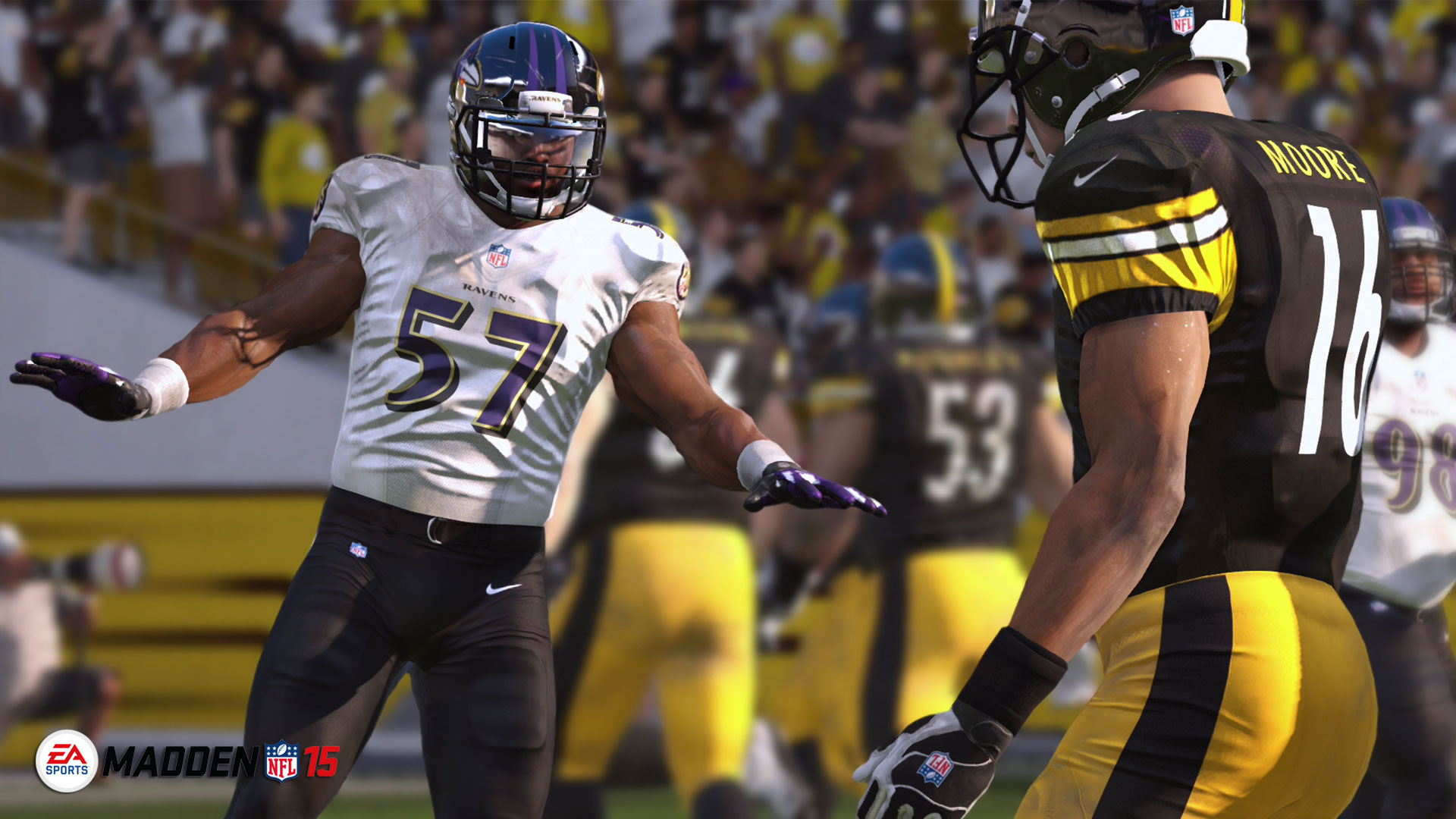 Last but not least, the play-calling menu has also been upgraded with more options and a myriad of ways plays are organized and understood. A minor change yes, but hardcore 'Madden' players will make the most of it when picking the perfect play.

While many veteran 'Madden' players will dive right into the online modes, spending their time playing against their friends or someone else online, EA makes sure not to overlook the other features of the football title. Connected Franchise and Ultimate Team also receive some upgrades, but for me, still do not take demand a significant amount of time away from normal gameplay. 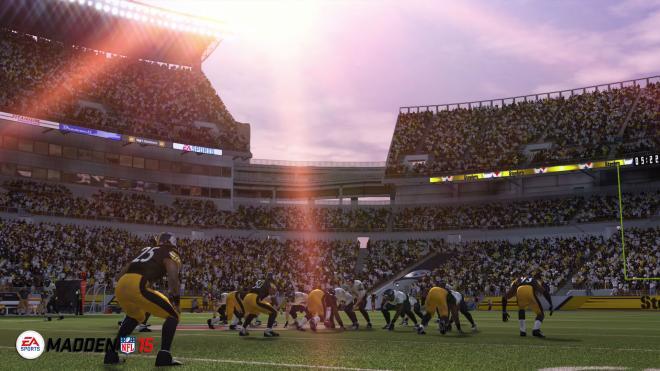 'Madden' is picture perfect even on the 360 minus a few glitches, which are to be expected. The player’s movements are realistic and sharp and the animations have been ramped up so every hit and every juke feels distinct and powerful. The graphics are what you would expect for a current version of Madden and while there is no doubt that the Xbox One version is superior, 'Madden NFL 15' is pushing the very limits of current gen hardware. 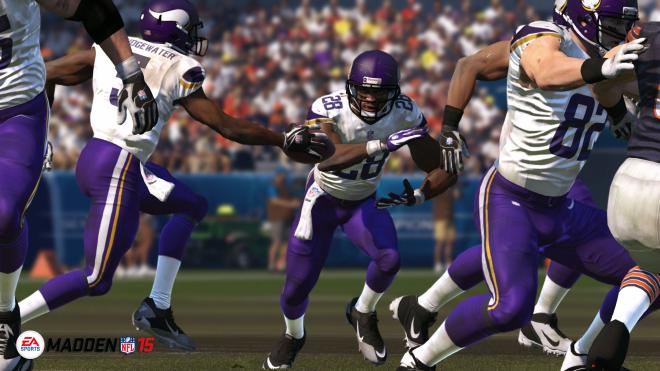 The audio is less of highlight. While the commentary does the game justice, it does lack a bit of variety or a realistic feel. Where’s the excitement? We have been spoiled by the commentary in other EA Sports titles and 'Madden’s audio is almost an afterthought. The home screen also lacks music or a playlist, something sports is always synonymous with.

'Madde'n is just what you’d want from a classic sports game. It provides hours of entertainment with on and off-line modes. It’s hard to put the game down and now there's an urge to complete all of the drills and hopefully finally be able to destroy the AI or all comers. 'Madden' will keep players busy for months to come. The non-stop trash talking is jsut a bonus for all the competitive play. 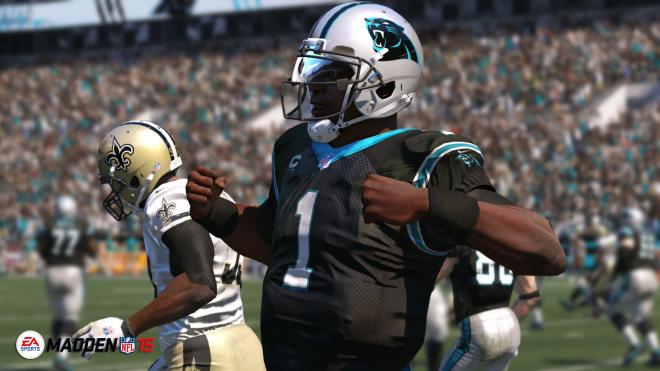 For someone who doesn’t wait in line for 'Madden' every year, I was very impressed and would consider doing that next year just to see how much better it can get. The game itself is addicting, especially the very in-depth career mode and Ultimate Team. For most 'Madden' players, the new version is almost a rite of passage for the beginning of the new NFL season. For the rest of us wondering if it is a worthwhile upgrade from last year, the answer is yes. The defensive changes, coupled with last year's offensive changes, make for the best all-around NFL offering to date, and 360 owners will be pleased to find another year of love from the folks over at EA Tiburon. 'Madden NFL 15'will tide you over very well..... at least 'til next year. 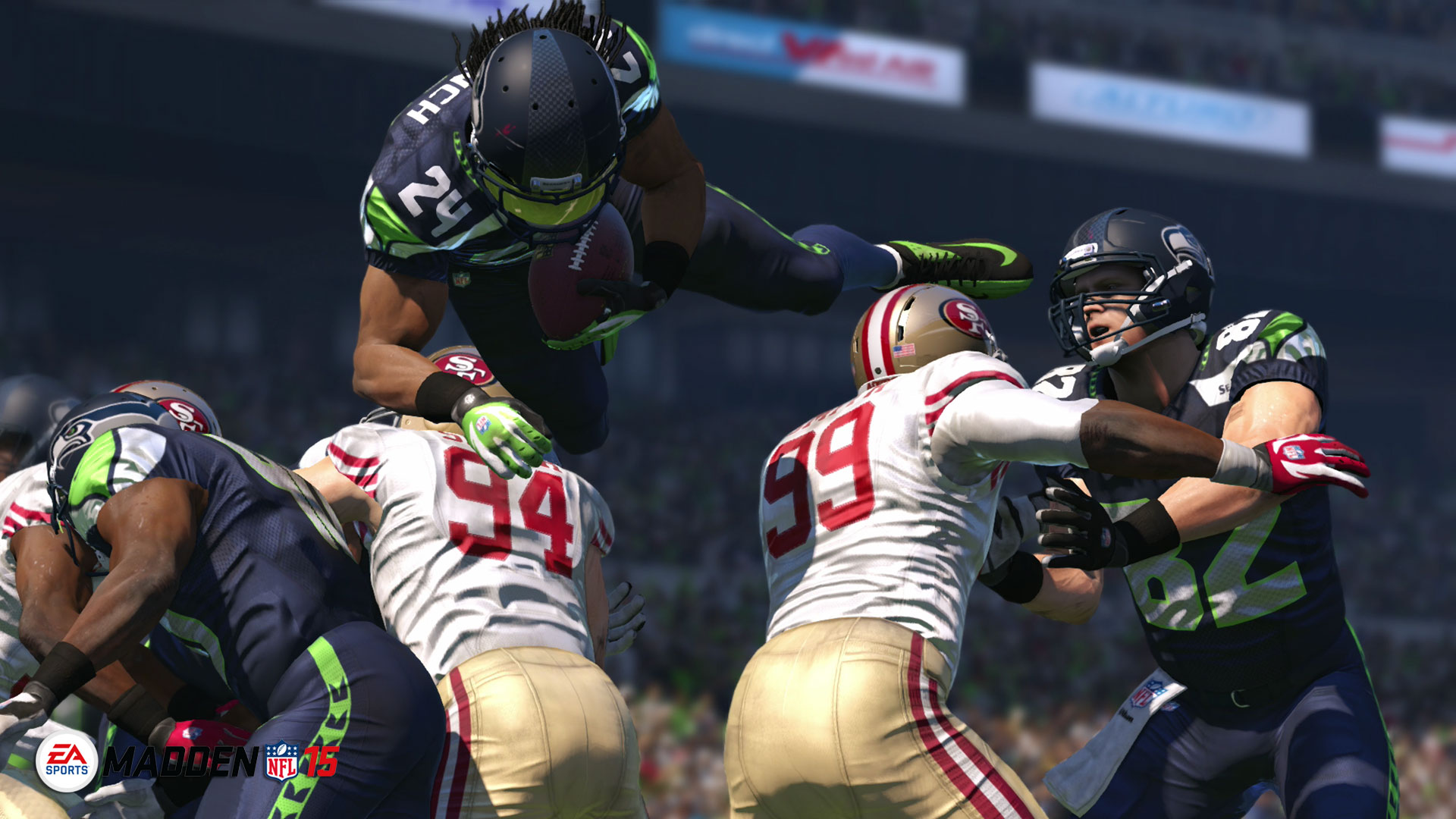