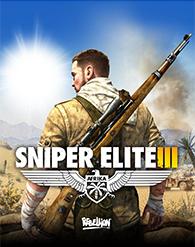 Sniper Elite 3 sees American OSS agent Karl Fairburne on assignment in North Africa during WWII to assist intelligence efforts and provide sharpshooter skills to Allied forces within exotic, rugged and open land. As part of his mission, Karl learns of a secret tank program which, should it become a reality, has the potential to crush any Allied force in its path and turn the tide of the war. With an emphasis on player choice, Sniper Elite 3 features non-linear gameplay across varied North African terrain such as mountain ranges and sprawling plains, allowing for a greater range of motion and the ability to take longer-ranged shots with customizable weapons. In addition, bustling cities and remote villages greatly assist in planning relocation tactics. An all-new vehicle kill-cam lets gamers take out armored cars and tanks and wreak massive destruction with one shot into vehicles' gas tanks. In addition, the infamous X-Ray kill-cam is back with greater graphic detail including circulatory system and muscle layer. Sniper Elite 3 also features co-op and competitive multiplayer.