The Game Itself
3.5 Stars
The Video: Sizing Up the Picture
3.5 Stars
The Audio: Rating the Sound
4 Stars
Replay Factor
2.5 Stars
Bottom Line
Give it a Rent

Xbox One disc version reviewed. It's worth noting that the reviewer used two diffenent disc copies, both of which gave read errors and one was completely unusable. The discs were in pristine condition and the specific console has no prior history of disc drive issues.

'Rainbow Six Siege' is the first proper 'Rainbow Six' game since 2008’s 'Vegas 2'. A predecessor called 'Patriots' had been in the works at Ubisoft for some time, but was scuttled in 2014. 'Siege' has no single-player campaign outside of the tutorials, though it does have a co-op PVE component.

In 'Siege', players take the role of specialized counterterrorism units tasked with carrying out various objectives while shooting bad guys. There are twenty distinct commandos that can be chosen - some are classics, such as a light machine gunner, while others reflect the adoption of more modern technology, like drone handlers. Many of the classes can employ various means of demolition, from sledgehammers to breaching charges.

Every match has a similar premise, even in different gametypes - perhaps best described as an explosive, destructive king of the hill. One team plays the attackers, the other the defenders, and swap each round until someone wins three rounds. Each round is preceded by a minute or so of preparation. 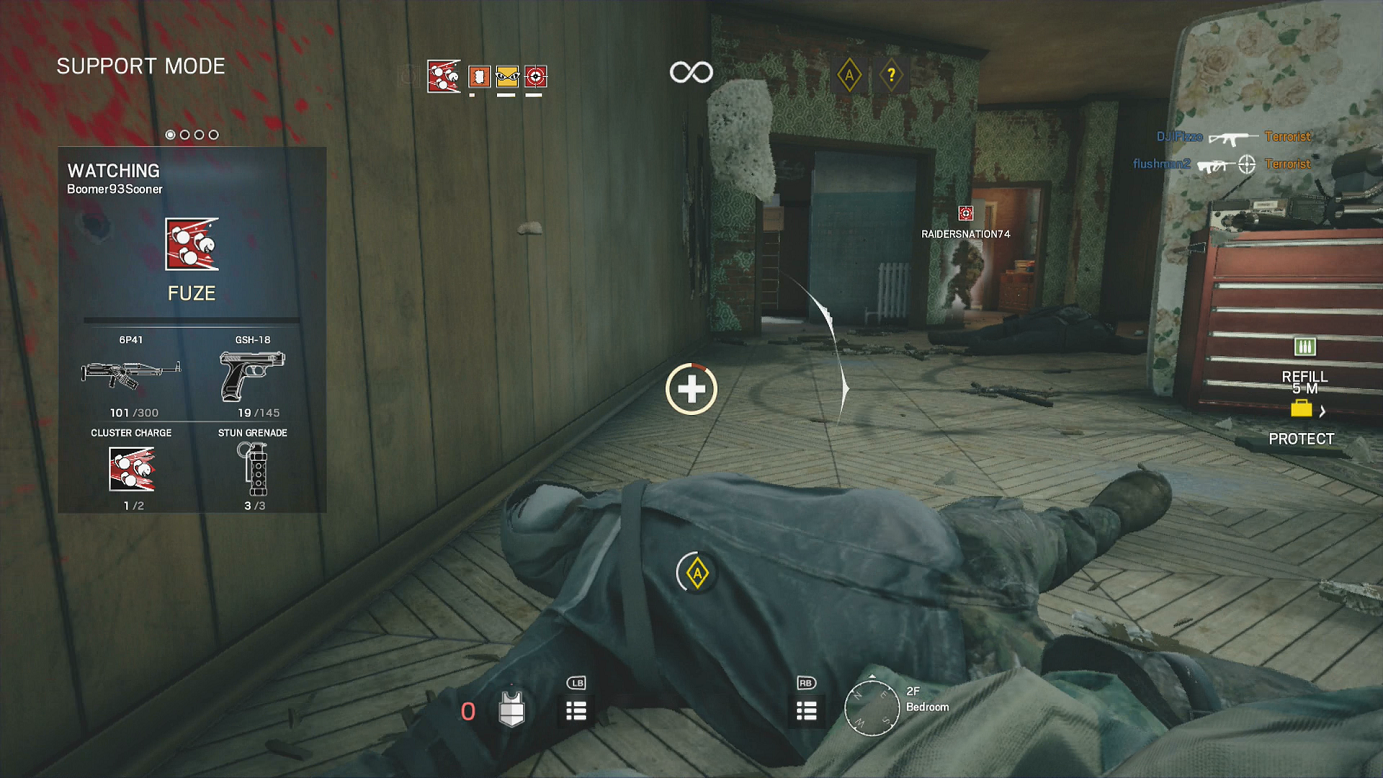 As the attacker, I controlled a little drone that scooted around the map, looking for objectives, enemy players, and traps. As the defender, my team set up the traps and reinforced doors, windows, and even wall sections with blockades and awaited the imminent arrival of our guests. In some matches we babysat a hostage, in others we had to protect electronic bomb defusers.

While environmental destructibility has been loudly championed by the devs, I was pleased and a bit surprised at how well it had been implemented. Years of shooters have conditioned me to constantly scan doors and sometimes windows for threats, but in 'Siege' I was just as likely to be shot through a wall or even the floor (a brilliant tactic if planned well). Pristine houses and offices are quickly turned into rubble via the many means of breaching available. This is a much more realistic and less video gamey representation of how buildings work. It has long amused me that flimsy materials like drywall are indestructible in games, even in the midst of huge explosions and fully automatic, heavy caliber weaponry. There are probably technical and gameplay limitations to justify this state of affairs, but Ubi will hear none of it. Every room is completely three-dimensional, and if defenders successfully bottleneck a door, they can soon look forward to a sledge smashing through the wall on their flank or coordinated breach charges on each side. As the attacker I liked the role of distraction, putting heavy fire through doors and pinning down defenders while my teammates looked for less orthodox ways of entry.

The weapons are pretty standard shooter fare, but that’s not to say they aren’t fun. Far from it. They are well balanced and responsive, from the pistols up to the heavy rifles. The holo sights in particular are very accurate. The other equipment also lends itself well for creativity. The Bandit operator, for instance, has a collection of electrified cables that can be attached to all kinds of things, including barricades. I found joy in electrifying metal barriers that my teammates had placed, and then watching enemies try to vault over them and receive a nasty shock. All of the gadgets have a hard counter from certain other classes, so selecting a diverse kit in the prematch is recommended.

Even with the decent roster of fighters, 'Siege' is pretty thin in content. The levels are nothing special, and don’t take advantage of the really cool destruction system. They are usually nondescript, boring buildings. The best part of the level design is the claustrophobic, close-quarters nature of the maps. No pesky snipers here, just lots of grenades and shotguns. As with many online shooters, good communication (or even just communicating at all) can mean the difference between victory and defeat. For gamers who like to play on their own, it might be best to take a pass. The only exception is the terrorist hunt player vs AI mode, which can be played solo (not offline), but is very repetitive. Terrorist hunt can also be played in online co-op with other players, which is more fun but not as much as other horde type games on the market.

Despite being a full release title with the accompanying price point, 'Siege' is heavy on the microtransactions. It’s not as pervasive as a mobile or free-to-play title, but progression is pretty slow without spending real dollars on renown boosters. 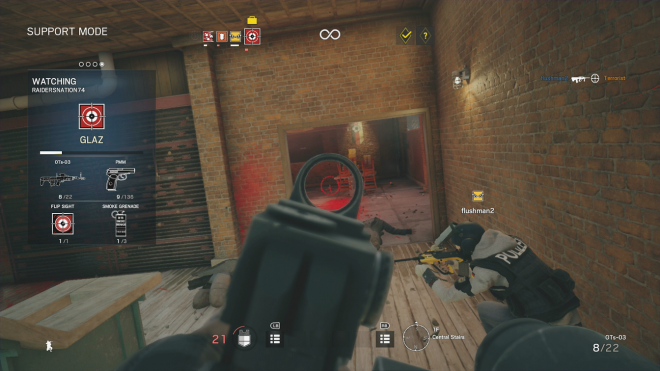 The RealBlast tech is the star of the show. The elaborate physics set 'Siege' apart from other shooters. The destruction is procedural and dynamic, with no two blown up walls looking the same. Barricades can also be partially destroyed, as I learned when I was shot through a door because I had neglected that one of the enemy operators was Pulse, who can perceive heartbeats even through walls. The framerate is mostly steady at 60fps throughout multiplayer, although it drops to 30fps in co-op mode, which is noticeable. As usual, the Xbox One version is in 900p. Modeling is pretty, but some of the environmental textures are cheap looking. 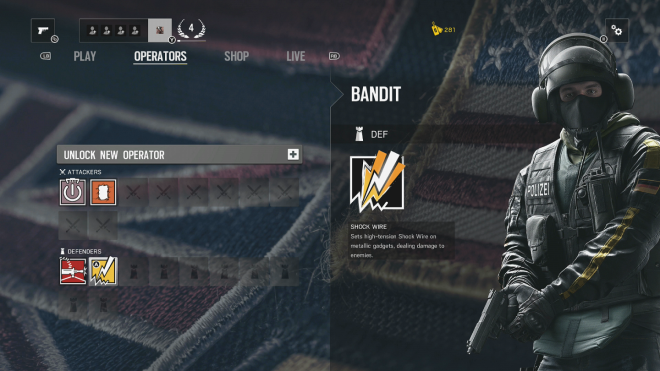 The sound effects are excellent, between the constant bombs, grenades, breach charges, and everything else going off. These effects can change depending on the acoustics of the room they occur in, a subtle but immersive detail. The voice acting is decent but as a multiplayer-only game, it mostly consists of people shouting at each other and crying out in pain. Angela Bassett ('Malcolm X') is the centerpiece of the cast, but it’s a small role.

There’s not a lot of variety in 'Rainbow Six: Siege', a common complaint about multiplayer-only shooters. The roster provides a modicum of replayability, but without microtransactions it will take some time for a player to amass a decent selection. Also, during the prematch portion, popular operators are quickly selected by other players. It’s a first-come first-served system and duplicate operators are not permitted. Because matches are round-based without respawns, I often spent several minutes of each match watching my teammates, which isn’t the most engaging gameplay mechanic. I would have preferred a system like 'World of Tanks', where dropping out from a match after death is permitted, with the caveat that the current character isn’t available for the next. 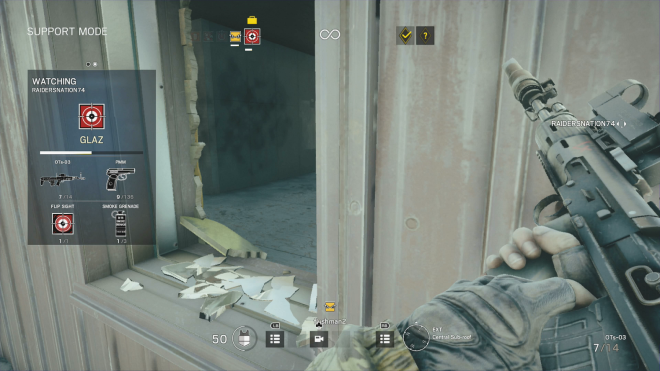 Call me nostalgic, but I miss the great 'Rainbow Six' campaigns of yore. The franchise has been rebranded as a different kind of game, similar to its predecessors but with more style than substance. A few days of casual play with 'Rainbow Six Siege' is quite enough to sample most of its charms, and while I enjoyed it, I doubt it will remain lodged in my memory for very long.