PS Vita
Give it a Rent
3 stars The Game Itself
3.5 Stars
The Video: Sizing Up the Picture
2 Stars
The Audio: Rating the Sound
3.5 Stars
Replay Factor
2.5 Stars
Bottom Line
Give it a Rent

Digital version reviewed. Vita version of 'Natural Doctrine' was played for the majority of this review with some time spent with the PS3 version. Screenshots provided are from the Vita version of the game.

Japanese Strategy RPGs tend to all follow the same general mechanics and paths. Most of them are turn-based, take place on a checkers or chess styled board, and place a small amount of emphasis on placement and a lot more on using powerful attacks to steamroll foes.

With 'Natural Doctrine', however, players are compelled to take careful consideration of themselves and the enemy, lest they fail and have to restart the mission. Developer Kadokawa Games labels their first game as an incredibly difficult game, and some have even compared it to the famously difficult Dark Souls series.

In this harsh world wherein 'Natural Doctrine' takes place, Bergmen roam the dangerous land. They search for the valuable Pluton, a resource that allows humans to be able to use magic. Without it, the last stronghold for mankind, Feste, would undoubtedly fall to hostile monsters, as brute strength is not enough. 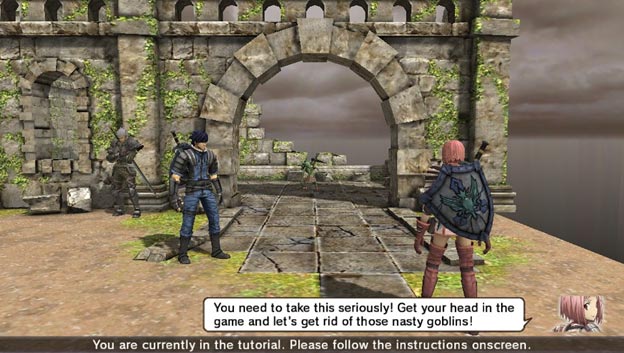 However, finding Pluton isn't as easy as building a mine and excavating the mineral: Raw Pluton is very poisonous to humans, and only goblins, considered a lowly, throwaway life form, are able to refine it in such a manner that humans could use it. So, it's up to the Bergmen to enter these goblin mines, and take the Pluton back by force.

If anything, 'Natural Doctrine' does a great job of painting a dark, dog-eat-dog world, and every battle really feels like a struggle for survival. Battlefields are usually in dark mine shafts, but even when they are above ground the landscape looks largely lifeless and vacant of life. Unfortunately, though, the game stumbles a bit on the actual plot, which revolves around protagonist Geoff and a band of Bergmen that get in over their heads when they discover a dangerous new species. The actual storytelling takes some weird leaps and bounds, and doesn't always bother to explain, or even hint at what's going on, leaving me a little confused and agitated as to what's really going on.

What better displays 'Natural Doctrine's theme of natural selection, though, is its intricate battle system. While 'Natural Doctrine' is more or less an SRPG, most of the battle system is different from the genre norm, and places a much greater emphasis on formation and initiative. There are many hard-set rules to remember when battling: How to link together party members to launch multiple attacks, how to kill foes in the correct order to keep allies' turns at the head of the line, and how to not shoot your party members in the back are all very important aspects to learn and remember in 'Natural Doctrine'… and because even one party member's death can lead to a Game Over, forcing a restart from checkpoint, you must also learn all the rules quickly. 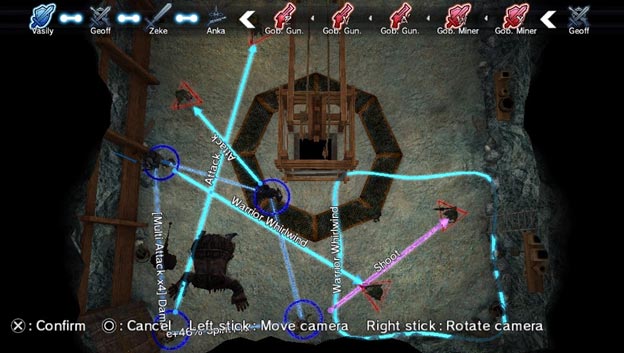 Usually, these rules are fair, and the enemies are forced to follow these same rules as well, creating a balanced playing field. During my playthrough, I failed and saw party members fall many times, but most of the time I knew exactly why I failed. One time I did actually shoot one my party members in the back, leaving the melee fighter weakened and unable to deal with the enemy onslaught. Another time I accidentally healed an enemy instead of an ally, because I didn't realize that when linking party members together, they all focus on the same target (typically an enemy) unless I manually moved the ridicule. On the flip side, though, I've had some mysterious happenstances, where I still don't understand how enemies choose which party members to attack and how they can sometimes (but not all the time) attack my ranged fighters when they are positioned behind melee units, a tactic the tutorial makes a point of in deploying. 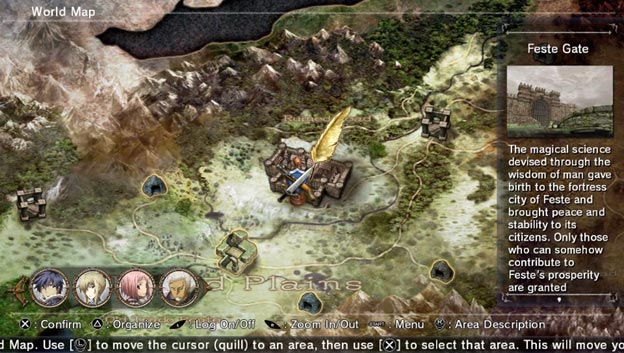 While 'Natural Doctrine' can be difficult at times, the real bane of the gameplay is its agonizingly slow pace. Due to the battle system's importance on linking together attacks and keeping initiative, and because the Bergmen usually fighting goblins, who love to swarm in small groups, oftentimes, enemy turns take far too long, leaving me waiting while the AI thinks and slowly shuffles all of the enemies around the field, which could be anything from two to twenty units. If there was a way to speed up the process, battles in themselves would become much more tolerable, but the way they are now, it can be frustrating to watch and wait through all of these animations, have a character die, then restart from a checkpoint and watch the same animations again.

Before moving on, it's also important to discuss the characters' methods of leveling up. Not only does a level up fully heal the character (a tactic that, if planned around, can be used to great advantage), but they also earn skill points. These points can be used to give your fighters increased stats and new abilities, based on their unchangeable class. Interestingly enough, these skill points can be reset and reallocated at any time, allowing for tweaks to the characters' output at any time in between battles. Different battles require different tactics to survive, so it can be more important to alter skills than it is to grind more levels. Then again, it can be difficult to know what is needed until actually in the battle in question, and a few times I've either had to restart the entire map, or try to push through with my weakened, un-optimized team. 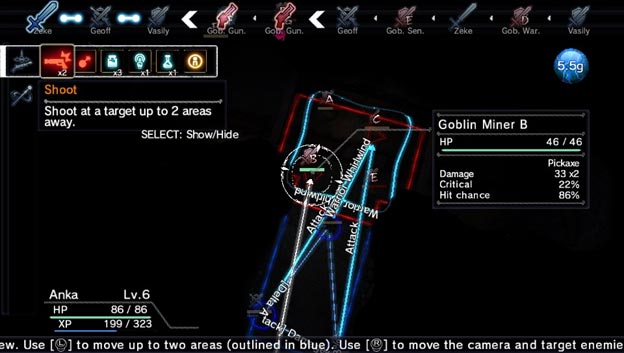 All the versions of 'Natural Doctrine' have cross-save and cross-play, so it is easy to change between the console and handheld versions of the game. However, the various versions are not cross-buy, so if anyone would wanting to take advantage of the system will have to pony up for an additional copy of the game. 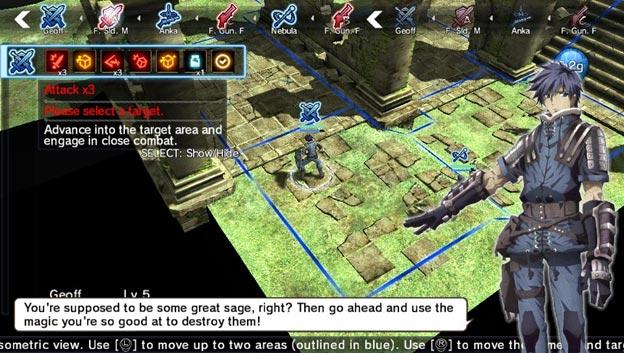 Let's just get this right out of the way: 'Natural Doctrine' is ugly. Even on the Vita, the character models look blocky and uninspired, and while the default character pictures look nice, it doesn't go far in making the rest of the game look better.

On the Vita, this is the probably "most" forgivable, if that makes sense. Due to the Vita's smaller screen, the isometric view shows the most important information, but obscures what environment details there are. On the PlayStation 3, though, the underwhelming graphical standards left me more than a little disappointed. While I did not try the PlayStation 4 version of 'Natural Doctrine', it does have a higher resolution than the other versions, but I doubt this alone will make for enhanced visuals. (Quite the opposite I wager.) 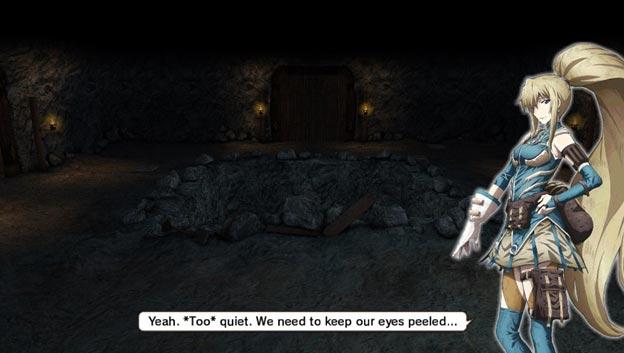 While 'Natural Doctrine' may not look all that great, though, it certainly sounds a fair bit better. The game's soundtrack is surprisingly good, with rock-themed tracks that raise the tempo, pumping up the listener for the battles ahead.

'Natural Doctrine' also provides dual audio for the game's voice tracks. The SRPG's English voice acting is serviceable, but it's really not all that great, either. The Japanese voice acting sounds a bit better overall, but that may also be due to my unfamiliarity with the language making me unable to catch poorly spoken lines. You can't change which version of the voice tracks you'll hear after you start the game, at least in the Vita version, so it would probably be better to go with the Japanese track. 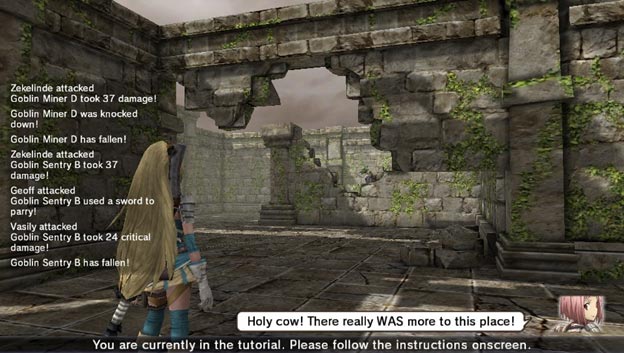 'Natural Doctrine' does have a New Game+ mode, unlocked after beating the main story for the first time. However, it's not like the usual New Game+… you don't get to keep your levels and equipment, keeping the same difficulty as before. Instead, if you do the right sequence of events, you can unlock a new ending, though explaining the importance of said ending would ruin a plot twist within the game.

Other than this new ending, though, there isn't much else to really see after you beat 'Natural Doctrine'. Even the new ending may not be enough to spur most that beat the game once, an account of losing levels and equipment. The PlayStation 4's DLC might add a little longevity to the game, but it won't appeal to most as it is just a bunch of harder maps to work through. 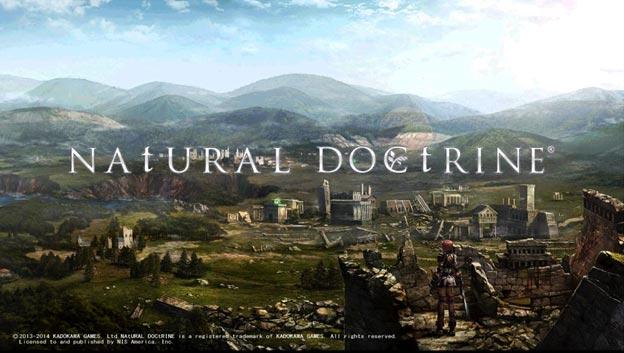 'Natural Doctrine' is really a love it or hate it game. There's quite a bit of good in this little title, but at the same time there's also a lot that will drive away a great many gamers. It's complicated, even obtuse at times, but battling and steamrolling over foes when everything goes right can be a great feeling. Then again, watching the same animations over and over again because of a failed attempt or lucky critical can be rage inducing.

My final recommendation? If 'Natural Doctrine' seems like your type of game, give it a try on the system of your choice, and be ready to experience the trials and tribulations of a newly wrought SRPG. It can be hard to completely encapsulate a game such as this without writing a whole walkthrough on the title, so if despite the flaws 'Natural Doctrine' still piques your interest, then by all means you should try it!