The Wolf Among Us: Cry Wolf

PC version reviewed. The episodic series is story-intensive, and thereby, the review is as spoiler-free as it can be.

Readers may also want to refer to the four previous 'The Wolf Among Us' episode reviews:

'Faith'
Smoke and Mirrors'
'A Crooked Mile'
'In Sheep's Clothing'

This is it; 'Cry Wolf,' the fifth and final episode of 'The Wolf Among Us' season, has been released. Fans who have been playing the game and delving deeper into Fabletown episode by episode should be ready to face this final episode with high expectations, while those that may have been waiting for the full season can now indulge. Telltale Games has become a household name thanks in large part to 'The Walking Dead' game series, and with both 'Tales From the Borderlands' and 'Game of Thrones: A Telltale Games Series' on the way, the developer's ascendance appears to know no limit. By comparison, Bill Willingham's 'Fables' comic book series might seem like a less promising target for adaptation. As proven through four episodes, nothing could be further from the truth. 'Fable' has been adapted into 'The Wolf Among Us' with serious gusto, and the pay-off for players both and old and new to 'Fables' really couldn't be higher. Now, the conclusion.

Even after having reviewed four episodes, this finale presents some challenges. Normally, the episodes tend to have a strong demarcation separating the carryover from the previous episode to the current episode's focus. Not this time. Not only is there a series of climatic events and a strong heaping of epilogue intermixed together, but the player has to face the consequences of several tough choices made in prior episodes. Like vengeful ghosts, various characters return, and while the acrimony is infectious and almost frustrating, so much more is made clear than just the resolution of the 'who done it?' question. 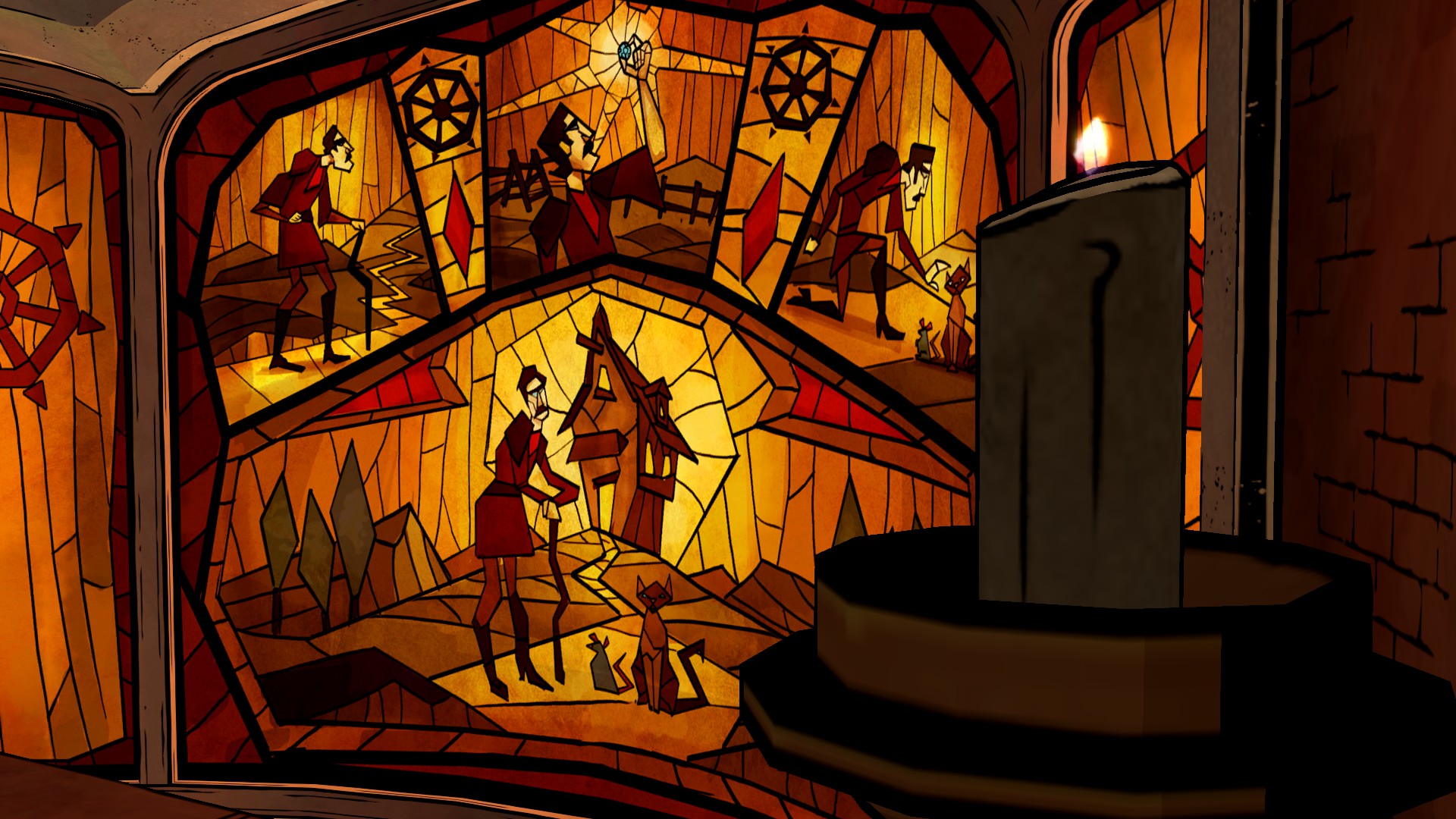 Morality in the Town of Fables

See, Telltale has been tricking players, and perhaps even tricking themselves. They started out with 20's era mystery, which was further ratcheted up in severity by the endless depravity of the overwhelmingly pathetic players in the Fabeltown community. From that basis, the emphasis shifted to Bigby's ongoing dilemma, how to bring to justice the guilty parties from a distrustful and disgraced community while meeting the sincere standards of his boss, Snow White. This was complicated further by White's insertion into the investigation, her role in case, and her personal relationship with Bigby. In the end, Bigby must go lone wolf, and when the tough decisions come, there's no little angel or devil there to coach the player. 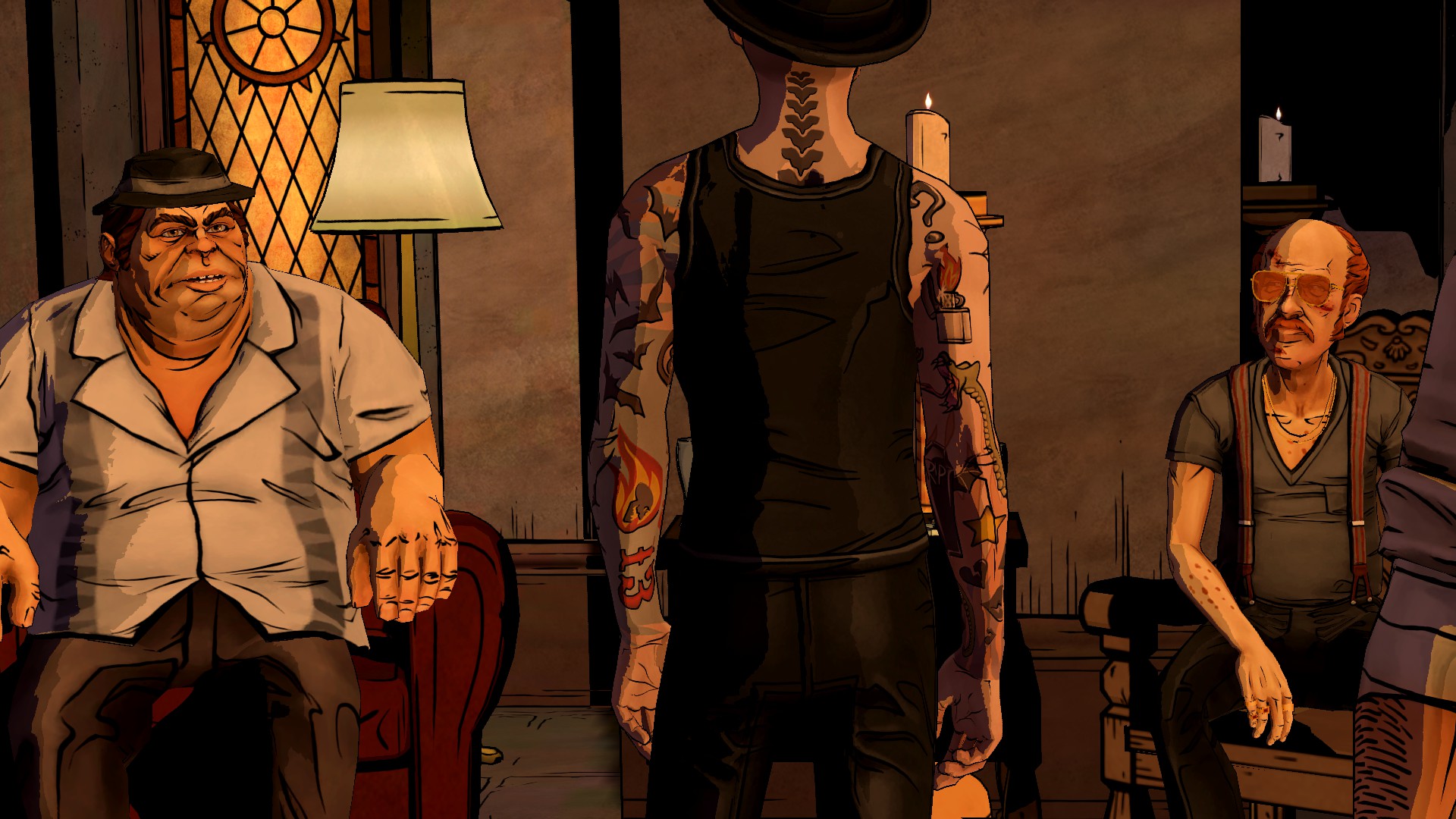 Here again though, is the trick. Having sorted out the situation, to which this reviewer could not see as simply black and white, the player must then justify their actions, not just for this episode but for the whole series. In effect then the episode has two moments which could be considered the climax, but the nature of the abounding recrimination of the second climax left me with such of feeling ill ease, it's very hard to accept that the story was concluded. From a much more neutral vantage point, the major and minor storylines were mostly resolved.

I had some issues starting the episode. It just wasn't wanting to let me use the mouse effectively. After restarting the game/episode a few times, I switched to another computer. The mouse worked fine, but several animations for the first chapter were somewhat bjorked. After that, the game was fine. Those technical hitches aside, there isn't much to object to in the episode. There are a few dialogue choices that I felt were too limited, and while I enjoyed the long fights, they still feel restrained. I've been waiting to take on certain characters, but it would take more sophistication in the combat options to satisfy that gameplay desire. 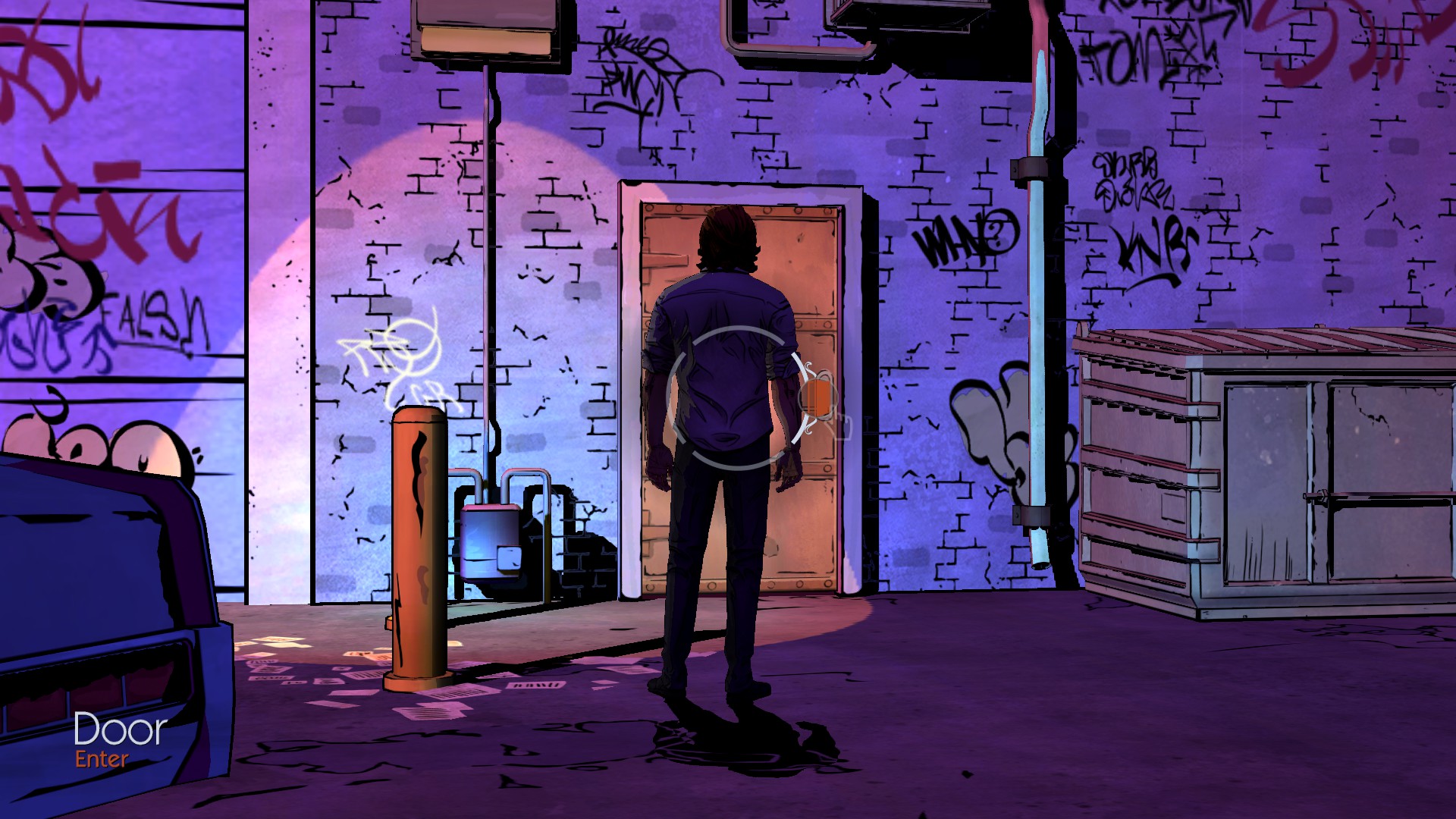 There were a few moments of doubt, some revelations that were lacking in gravitas, and yet, there were other moments that delivered in full with major interest. Taken as a whole, it was excellent. 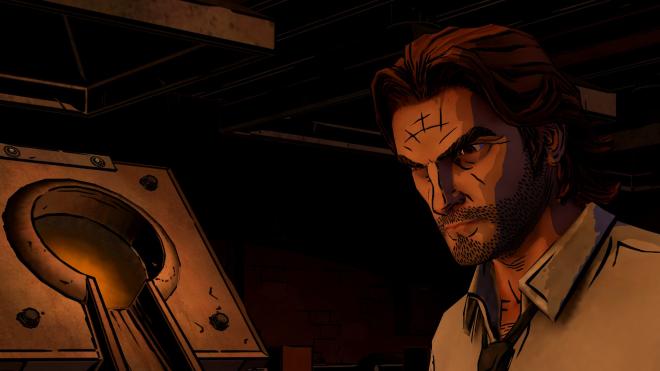 Sadly, the visuals have taken a step back in this episode. It may just be a case of engine fatigue, but there's very little in the episode that we haven't seen before. We get an industrial area that qualifies as a background, and we get something new visually that I'm not sure Telltale has tried before, and unfortunately needs either more work or a different engine. Especially after seeing 'Tales From the Borderlands' in action, the assets for the sequence in question look half-baked.

Again, the recycled settings and characters continue to look very good minus the troubling animations I witnessed in the first chapter. Overall, I'm fine with not introducing much new visually for this last episode, but it's still slightly below series standard. 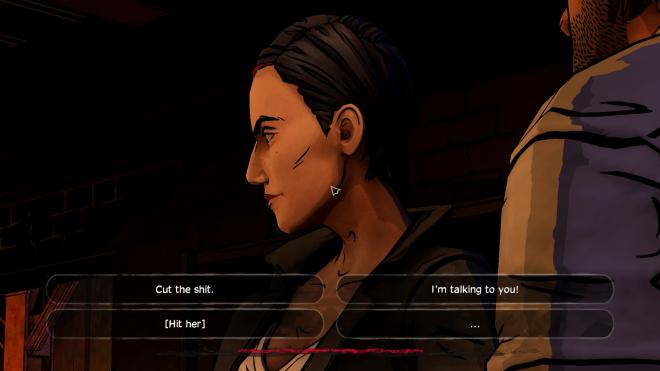 The soundtrack has stayed the same for the whole series. It effectively sets the mood, but I hope in future series they can add a track or two in each episode. Telltale does deserve credit for maintaining the voice acting quality. Bigby as always can occasionally read lines in a 'I'm Ron Burgandy?' manner, but overall is very good. With all of the returning characters in the episode, there are a lot of voices at work, but the result is topnotch.

The whole series has hinged on this episode. A cynical player will fault Telltale for working in so many past actions and characters- even back to the first episode, but nevertheless, after wondering about replayability for so long, I think it would be easy to replay immediately, and possibly at regular interval in the future. 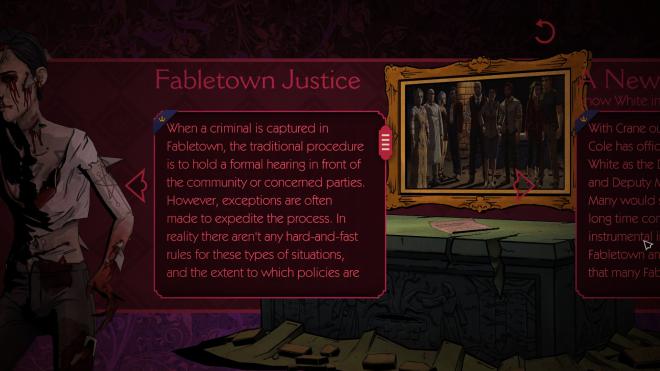 The player choices statistics were working this time around, which is good, and they were somewhat interesting. The bonus choice stats are not my favorite, and the whole Book of Fables/Achievements can feel perfunctory after five episodes. Still, I would miss them. 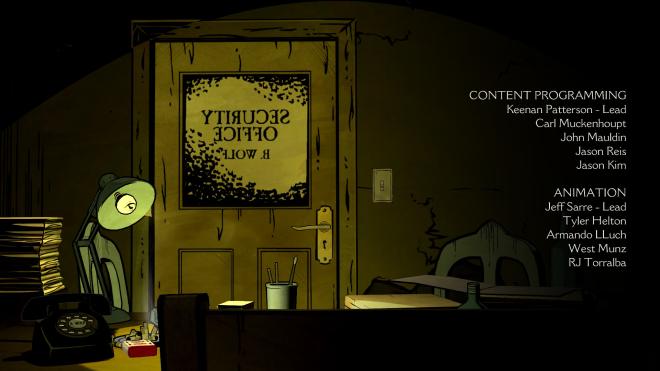 'Cry Wolf' does an excellent job of concluding and capping a powerful season. (I don't know if there will be a second, but I would like one.) It also managed to instill a much greater desire to replay the whole thing than I was expecting. Even after the last episode's thrilling almost rampage, this was the first time I felt the full weight of playing as Bigby, and I don't know that the character would be proud of the choices I made. That's a good thing for the game, and Telltale must be tremendously proud of what this initially questionable series has achieved. 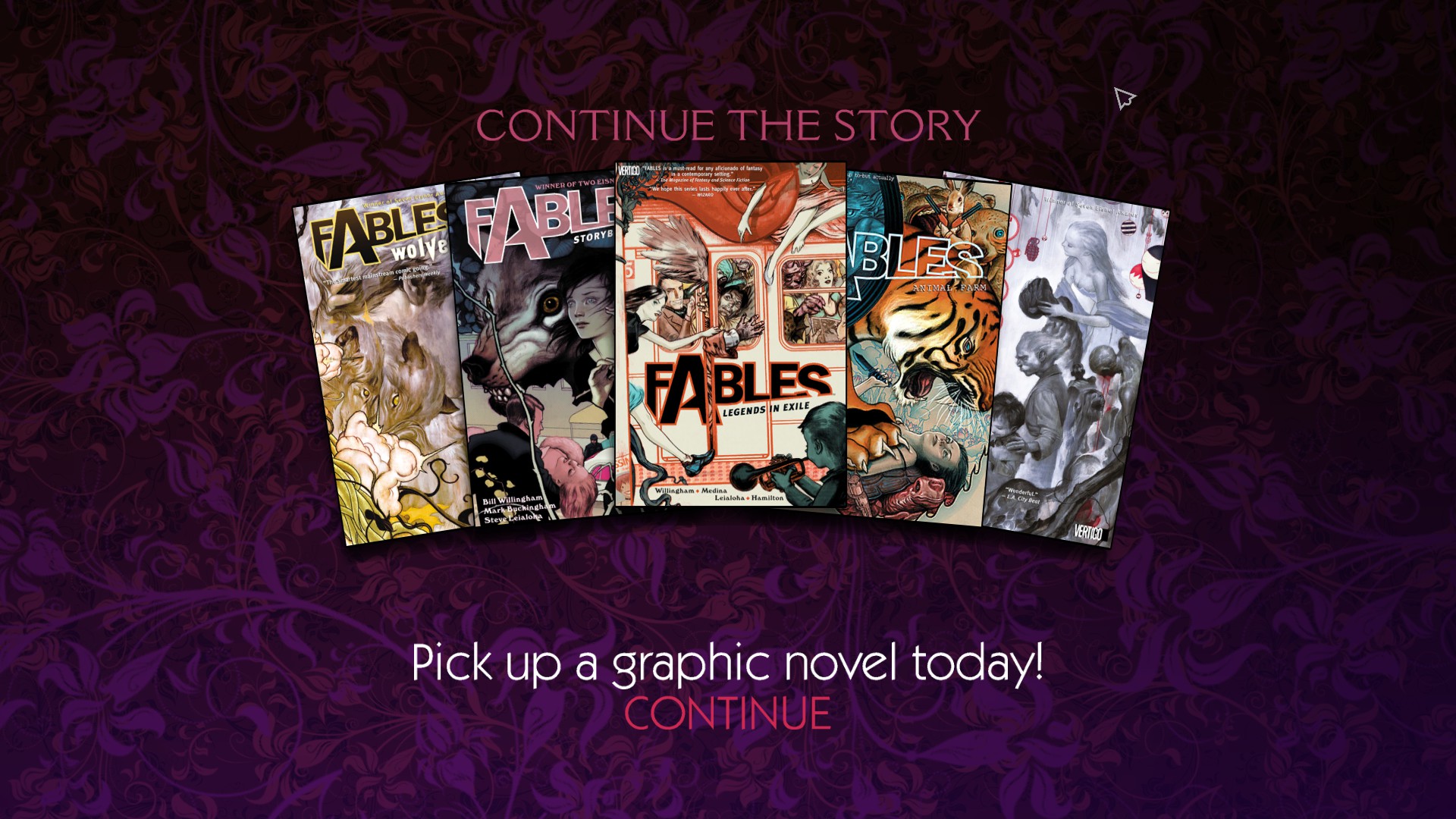