There were so many years between the launch of the 360 and PS3 and their respective successors, the Xbox One and PS4, it's been very easy to forget how different the state of console accessories is now from back then. Memory cards, wireless controllers, batteries, HDMI, fight sticks, steering wheels, light guns- some things have changed and some things have stayed the same. One major change that came with the ascendance of online console gaming is the need for headsets, both for game/party chat and just for playing in quiet environments. For many, whether they be hardcore FPS players or just those who like to game at all hours without blasting audio to others members of their household (parents, kids, friends, and neighbors, can all benefit), the "headsets" that come packed in with the new consoles just won't cut it. The PS4 mono earbud might be better that nothing, but is that really a rational that should be used when purchasing and using a $400 console? 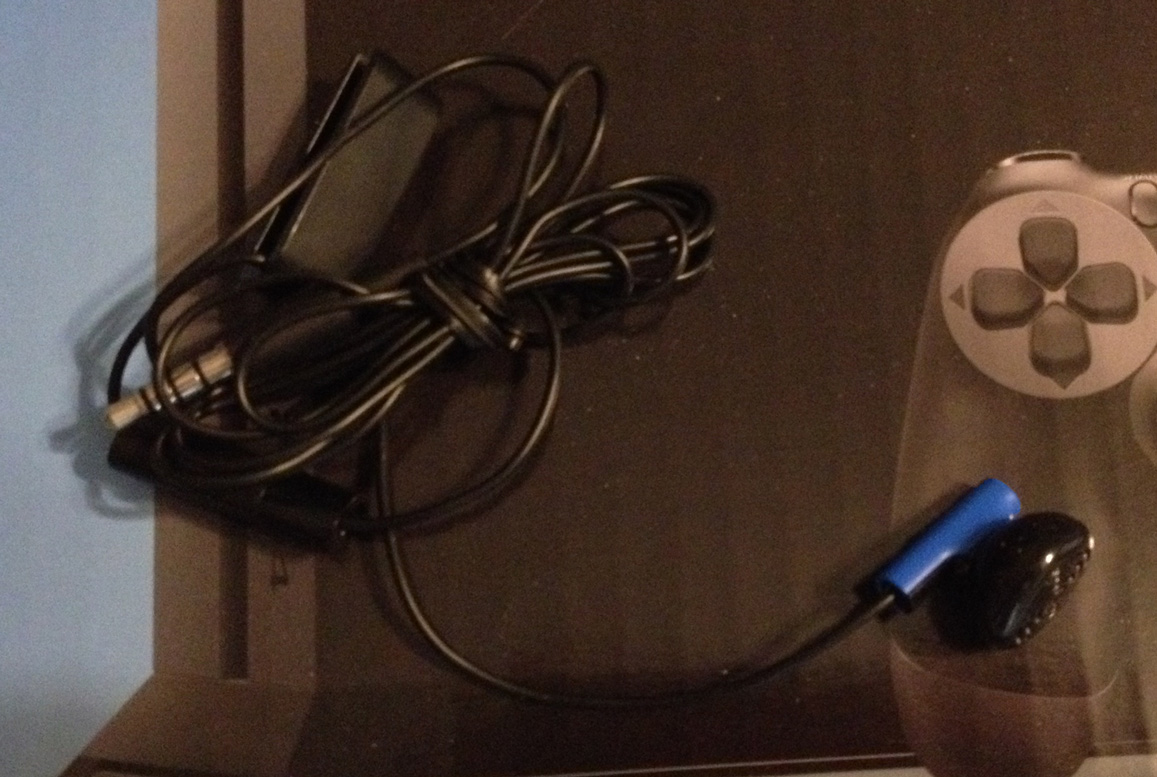 The Turtle Beach Headset Upgrade for Turtle Beach Headsets aka Turtle Beach PS4 DAC, is an odd product, especially as its function is really to link two existing products, the PS4 and some dozen different Turtle Beach headsets. To really explain what the product is like takes just a bit of background meant to illustrate its less than obvious purpose. 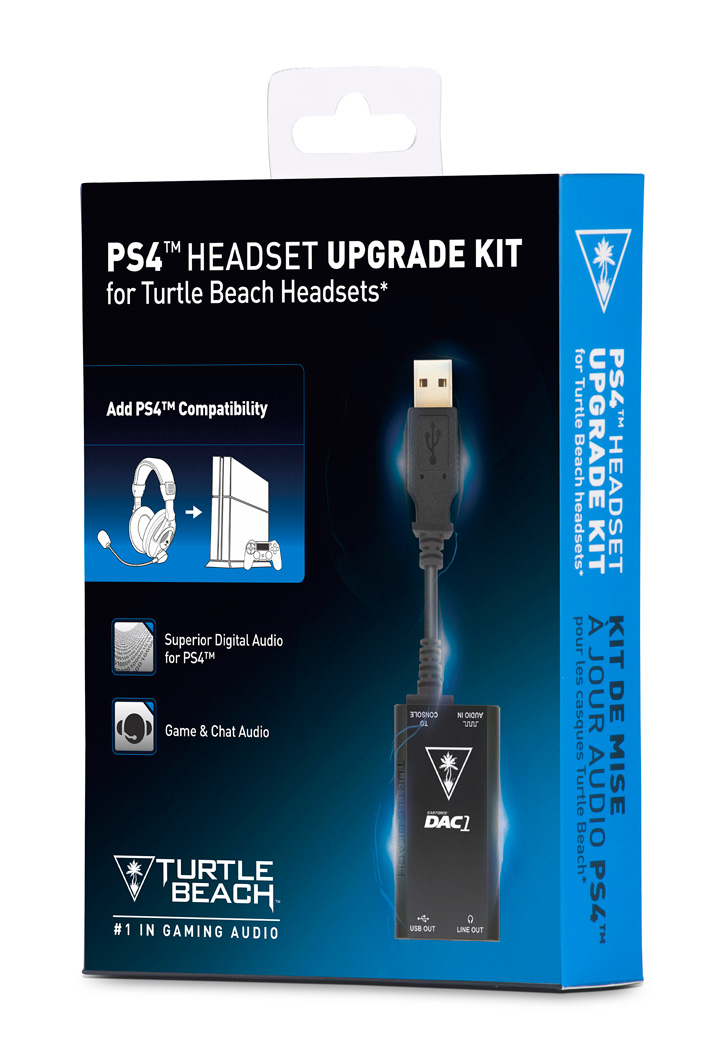 Turtle Beach, along with a lot of other headset manufacturers, offered the 360/PS3 generation of players a whole a range of headsets from small portable styles all the way up to wireless surround models that rival the cost of actual console. For many gamers, the sweet spot between functionality and price hit the $60-$100 range, and in that range could be had headsets like the Turtle Beach Ear Force X12 for the 360, which is powered by USB, and connects to both the 360's analog audio ports and the 360 controller's mic ports. As a fairly recent headset, it has a lot of features that easily beat the pack-in options for both the PS4 and Xbox One.

First and foremost, it's powered. The headset's 50mm drivers can deliver an auditory experience that will crush a passive model, and there is a reason for that. Though it can be chat only, the idea is that this headset carries both high quality chat audio and game audio. In fact, it's great to use when gaming offline. While it is a stereo set, it's been designed with the demands of tournament FPS players in mind, and really makes the most of a stereo sound field.

There's more to this than just better, powered headset speakers. Both the PS4 and Xbox One can deliver chat and game audio to a passive headset plugged into player's controller, but there are some drawbacks. Focusing on the PS4, it's already a wireless controller carrying chat audio, and asking it to carry game audio is fine. It can do it, but the quality difference is not something you need to be an audiophile to notice. Beyond that, the Ear Force X12 has separate controls for game audio and chat audio as well as bass boost control, and a mic mute switch. While many passive sets and ear buds have mic mutes, the ability to control both the game audio and chat audio is huge, and the first time the user navigates into the PS4 settings to try to adjust the volume for passive set is like to be a frustrating one for several reasons versus just touching the X12's volume wheels. 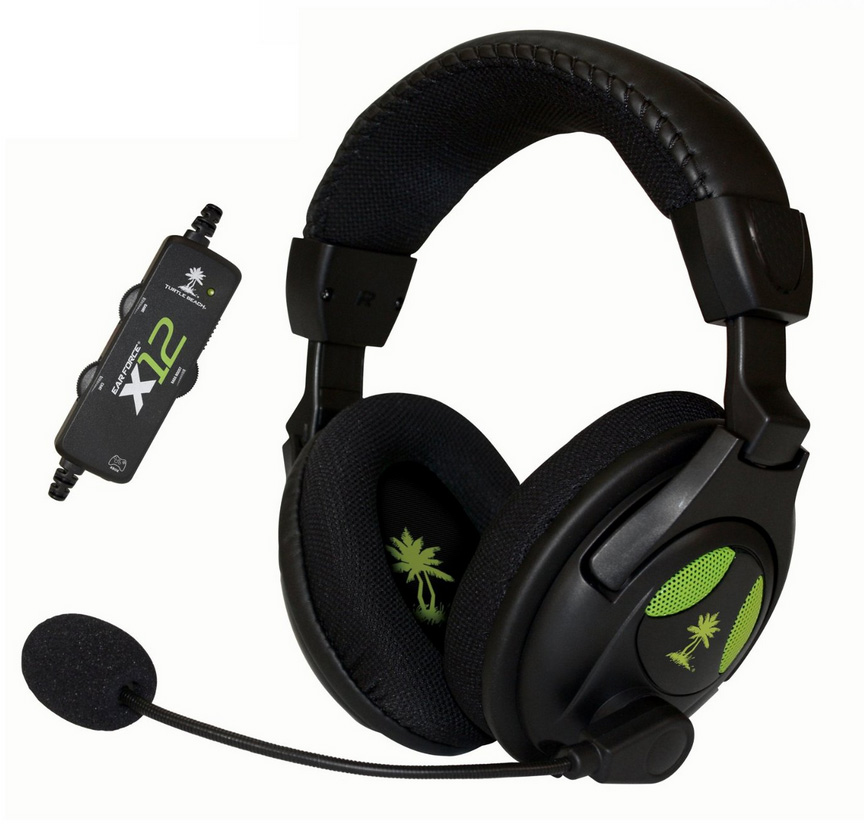 The Ear Force X12 was designed for the 360, but it can work and work well with PS4. There's just the problem of getting hooked up. The PS3 focused Ear Force PX22 has a similar problem. Both models have a 3.5mm audio connector and are bundled with 3.5mm to RCA audio cables that are meant for the analog audio connections on the 360 and PS3. What's great about that design is that the user can keep their console hooked into their home theater through HDMI while the headsets use the analog audio out.

What's not great is that the PS4 doesn't have analog audio connections apart from the little port in the controller. That's where the Turtle Beach PS4 DAC comes in.

Without the Turtle Beach PS4 DAC

The Turtle Beach PS4 DAC isn't required to make these headsets work with the PS4. If you have the right cables (I have a few boxes of odd cables), and a somewhat reasonably features TV or receiver, you can make the headsets work with the PS4. For the X12 I used a USB extension for the USB to PS4 connection and a 1/4" to 3.5mm headphone adapter to plug into the headphone jack on my receiver. That just left the 2.5mm to 3.5mm chat connection, which I'll come back to. I also could have used the RCA audio out on my receiver or on my TV (that would taken some more drastic connection fiddling). This all worked fine, though I would have to disconnect the headphones from my receiver whenever I wanted to use my speaker set-up.

With the Turtle Beach PS4 DAC 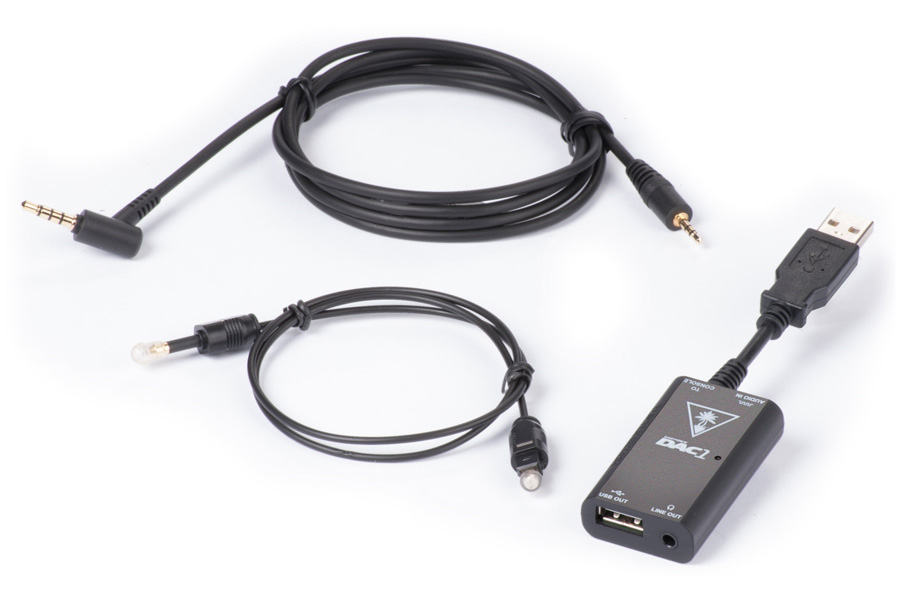 But what the Turtle Beach PS4 DAC does is to use the PS4's optical port to convert the system's digital audio to analog, creating a 3.5mm line out that is perfect for the powered X12 headset (among many other headsets). This can be done while leaving the HDMI output unaffected. The kit includes a short optical to TOSLINK cable and Turtle Beach PS4 Chat Cable. (The only other time I can recall using TOSLINK recently was on few of my laptops, like my MacBook air, so anyone can be forgiven for not knowing what it is. Trust me when I state that it really makes sense for this product.)

How to use the PS4 DAC

As pictured, just connect the Turtle Beach PS4 DAC to the PS4 via USB, then run the included cable from the optical port on the back of the PS4 to the TOSLINK/Audio In port on the DAC. The other side is even simpler, just plug the USB and 3.5mm cable of the headset into the USB out and Line Out of the DAC. 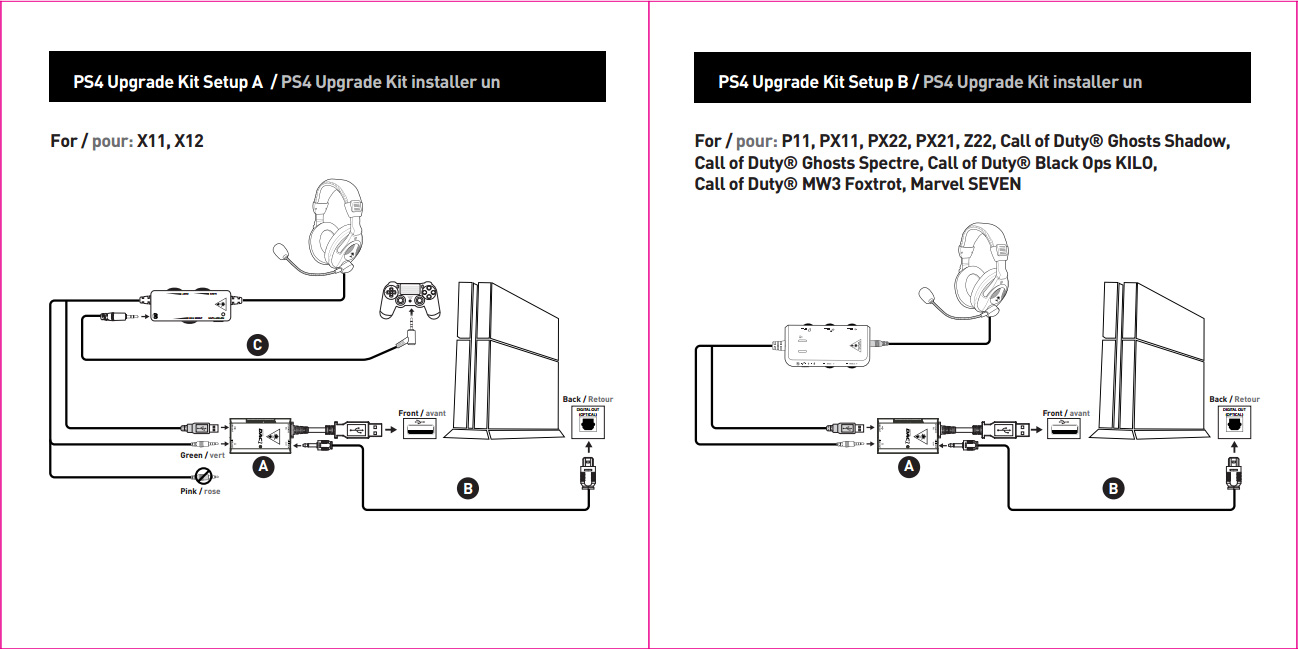 If you are using a PS3 headset like the Ear Force PX22, then congrads, you're ready to go. (Be sure to check you PS4 settings as described in the Quick Start guide.) The chat will be delivered via USB and be better for it. On the other hand, if you've got a 360 focused model like the Ear Force X12, then you need to use the Turtle Beach PS4 chat cable that is included with DAC to connect the controller to the 2.5mm port on the cord of the X12. This is the one cable that I didn't want to piece together but needed, and it's inclusion in the kit is a big pro for me.

Now for the moment of dumbfoundedness. Through sessions of 'Resogun' co-op, 'Assassins Creed IV' Wolfpack mode,' 'Killzone,' and even the 'Destiny' beta, I tested the DAC, along with several other headsets I had lying around. After comparing using the PS4 DAC with going through my A/V receiver, there was almost no noticeable difference aside from one being a line out and the other variable. I could have messed with receiver's EQ , but that wasn't my goal. Almost immediately, I felt like the PS4 DAC didn't really makes sense to buy, just something of superfluous product. I did like using it, as it made for the cleanest and simplest connection. Using it left the rest of my home theater be, but it's audio quality was no better than the workaround. That's just the thing though, my workaround used quality parts as well as my reciever, and the PS4 DAC measured up just fine.  If I were using the PS4 in more of a tournament, standalone situation, one more common to the Ear Force X12's normal employ where the user may depend on the headset as the primary audio interface, the PS4 DAC would be a must.

Beyond that, it offers an opportunity where just by going to the PS4 settings during a game, the user can test the difference between the passive wireless game audio that the PS4 can send through the controller to the amplified line out from console. There's no contest. If the user already decided to use something like the X12 or PX22 on an older console, the chance the to play a game like 'Destiny' on the PS4 is no time to downgrade. It's great that you can plug in any old earbuds into the PS4 controller and get game and chat audio, but it's not what I recommend doing on a regular basis.

At the full price of $34.95, it might seem like a lot to make a $60 headset work. Even subtracting the $11 value of the Turtle Beach PS4 Chat Cable, and it's still boils down to a question of application. The PS4 DAC is quite compact, simple to install, easy to use on a regular basis, and delivers the performance of what I would expect if the PS4 had proper analog connections. It's stylish enough in looks, but I sure wish the PS4 had a USB port in the back. (For comparison sakes, it brings to mind another odd product I own, an optical to digital coaxial convertor box that cost $17, but is ugly, and needs a power outlet to work. When it's needed, it's indispensible.) 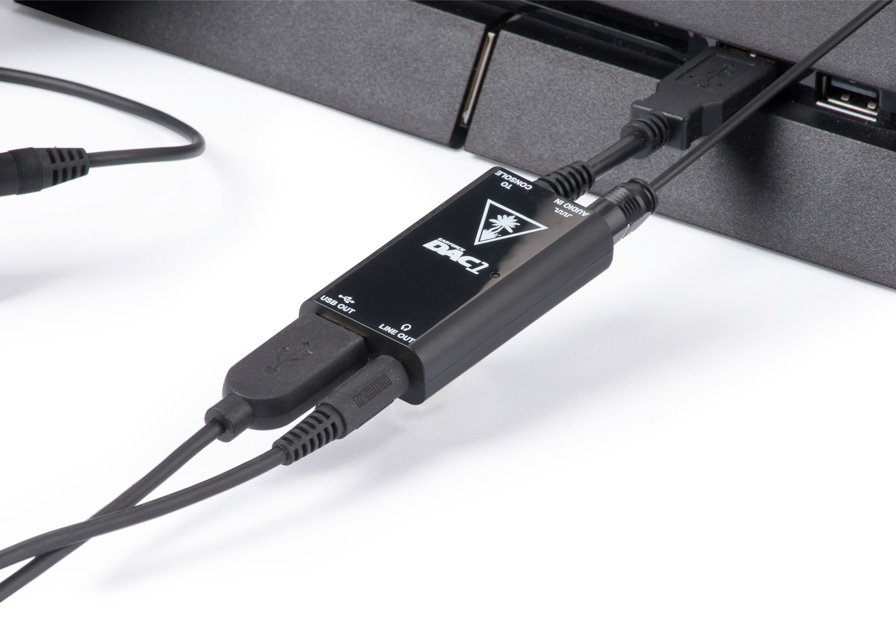 Audio Line Out for Most Any Need

And though the PS4 DAC is clearly made with Turtle Beach headsets in mind, its audio Line Out connection can be used for just about anything you can think of. I tried out a few things, including some wired, battery powered headsets that I have. It works perfectly. If you have a PS4 that is mobile, that needs to move public demonstrations, tournaments, summer destinations, and work with analog only audio connections such as PC speakers, arcade cabinets, or receivers that lack HDMI or optical connections, the Turtle Beach PS4 DAC may be just the solution you're looking for. (Just as an example, I have a 24" 1080p Gateway monitor that has HDMI, but no speakers or audio out, and I've used that monitor with a PS3 to play 'Super Street Fight IV' with various PC speakers in all kinds of mobile/temporary situations. To do the same with the PS4, the Turtle Beach PS4 DAC will be a must.)