The Game Itself
4 Stars
The Video: Sizing Up the Picture
2 Stars
The Audio: Rating the Sound
2.5 Stars
Replay Factor
4 Stars
Bottom Line
For Fans Only

PC version reviewed. The review's scoring makes some exceptions for what are completely substandard visuals.

Square Enix is up to their old tricks, reissuing an old title at a premium price, and that doesn't begin to describe the peculiarities of 'Final Fantasy III' for the PC. At the core of this PC release is a game that first made its debut to the Japanese public in 1990 on the Famicom and was not officially brought west until 2006 on the Nintendo DS. It's also the 'Final Fantasy' that introduced the whole job system craze among its many other 'Final Fantasy' firsts. This PC version has received some updates, but these updates are more functional in nature, which means players should expect a experience meant for the Nintendo DS, an experience that since has been ported over to several mobile platforms. And yet for those taking the plunge, the 1990 RPG is like, for better or for worse, to provide an unparalleled experience.

Consider me staggered. I took my first stab at 'Final Fantasy III' some fifteen years ago, and played it long enough to confirm that it was much closer to the NES 'Final Fantasy' than my beloved SNES 'Final Fantasy IV.' Generic characters, painfully slow menus, and true danger whenever outside a town. 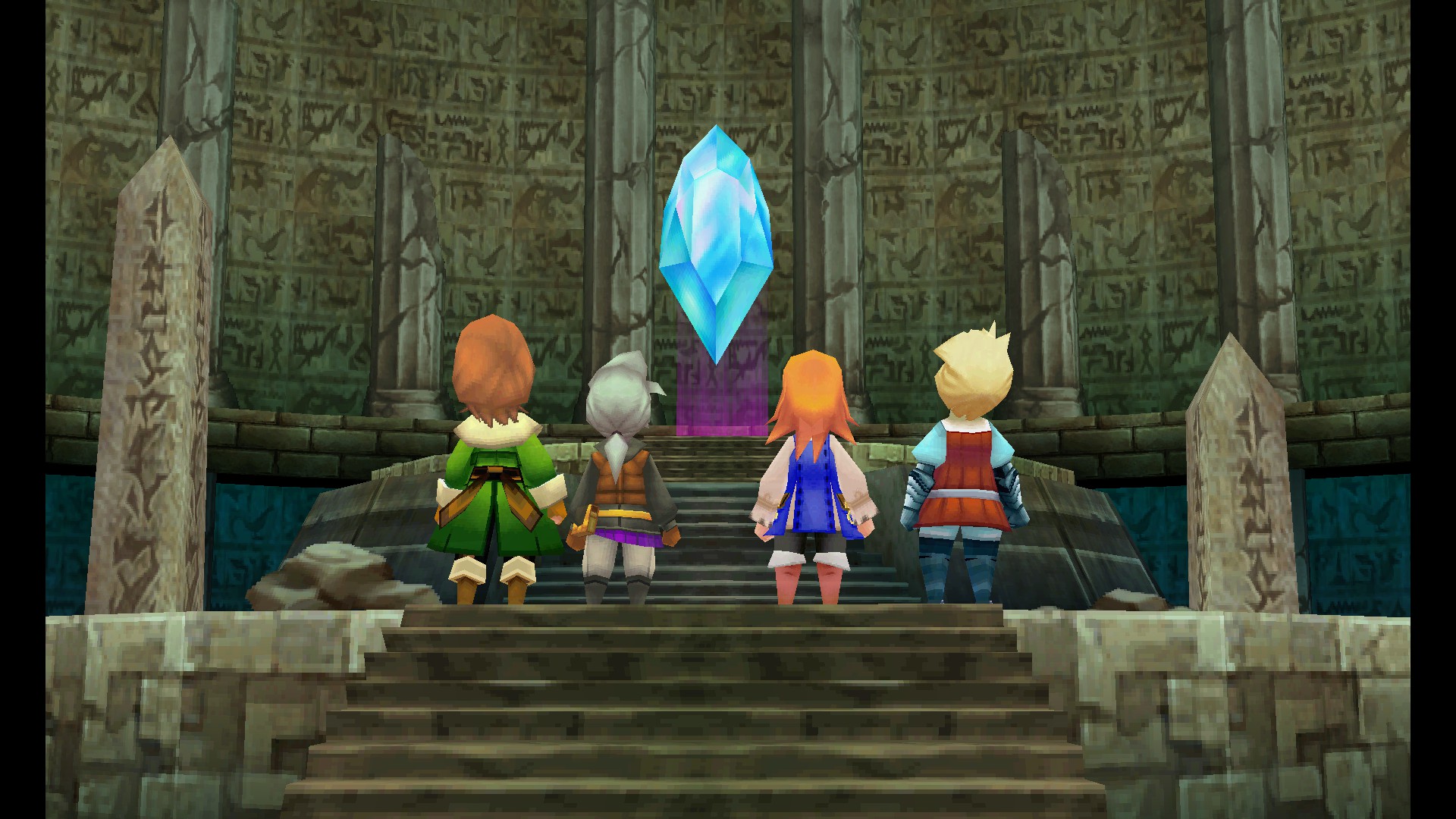 With mainly the 2006 DS changes to make the difference, this new PC version is still easy to dismiss, either before or after purchasing. There's no sugarcoating it, that first hour playing is very likely to be the last one. It can be extremely hard initially to process and withstand the 3D Nintendo DS visuals, the rough edges of the PC port, and the undeniably vintage game design. If you have never played 'Final Fantasy' or a variant of the 8-bit era 'Final Fantasy' games, I can't imagine how you would respond. For me though, once past the lengthy intro (post-Djin, where the Job System opens up), I found myself playing one of the most engrossing game's I've played all year.

When Square Enix elected to remake the game for the DS, there was this idea of wringing the most out of the DS hardware even to the point of only using one screen. (Nintendo's oversight over the project ultimately meant both screens are active, but only in the token sense.) Along with the normal FMV intro and a few other nice 2D screens, Square Enix created a proper beginning for the game, making each of the four members distinct, and those characterizations are maintained through the game, which really helps sell what is otherwise a quest to quest story.

I'll go into further details on the visuals in the Video section, but suffice to say that scaling up the DS to PC resolution easily makes for one of the ugliest things you're like to have gaming wise on a PC. It is balanced in part by excellent art design, but again that first hour playing you may want to put a bag over the monitor. And yet even with hideous, rudimentary 3D visuals, I've found the game addicting. 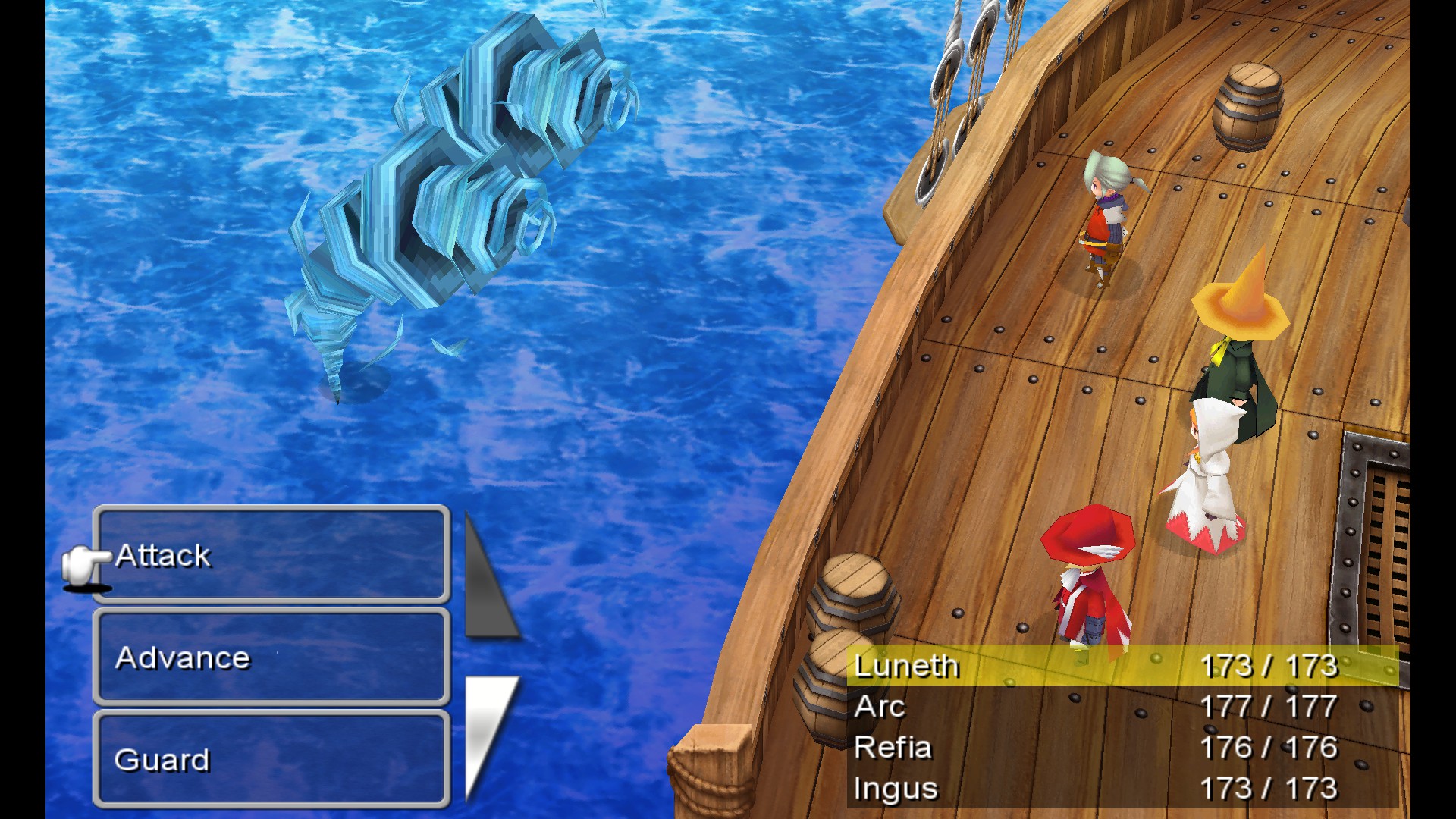 There are tons of minute changes that rebalance the difficulty from the Famicom days, but still the difficulty demands skilled play. Get stubborn with what jobs you want your party members to have at any given time, and be prepared to lose the whole party again and again. There's no active time battle in this installment, so there's no need to rush commands. Here again, the beginning of the game will lull you into clicking through easy battles before smacking you with a kind of higher level area.

The game retains a quick save system in addition to the three save slots. You can quit the game in mid dungeon, and resume right at that spot, even from another computer. (Note, you resume from quitting anywhere in a dungeon, but you can only repeatedly load from one of the three save slots.) The Steam Cloud is one of the few PC version features, and it is a godsend for me. What you can't do though is actually save your game anywhere but on the world map, which when coupled with the limited options for restoring your characters HP, MP, and Status, means taking battles very seriously. You want to be as close to your best as possible when you locate and face the boss of a given dungeon. There's no saving in dungeons.

I don't like grinding in RPGs and playing through the Job System in 'Final Fantasy V' long ago soured me on the concept. Still, this being a proper 'Final Fantasy,' you don't have to grind. Take battles as they come, and you should be close to ready for every boss. Unlike other entries, you can't take skills like Jump and Steal from learned Jobs; the character needs to be in the associated job to be able to use those abilities. At the same time though, there is a penalty for switching jobs that's quite large at first, necessitating some extra battles to overcome. Beyond that, fans of grinding will likely be enamored with leveling up each job and assigning equipment and magic for each Job change. As for myself, the more subtle benefits for leveling jobs, like a smaller change penalty and being able to hit multiple times per turn make the system far more enjoyable than I would have guessed. Unlocking whole new jobs/classes is fun as well, and the entire system is a welcome leap over the first 'Final Fantasy's permanent commitments.

When you've played a classic 'Final Fantasy,' those possibly dormant old school JRPG skills should come alive in response to this game, which despite the many ports, is obscure by numbered 'Final Fantasy' standards. More than that though, I found sifting through the game's changes interesting on its own. Frequent sub-characters meet up with your party and tag along. They can be chatted with for tidbits of story or characterization, and they also randomly help with battles, often to great effect. 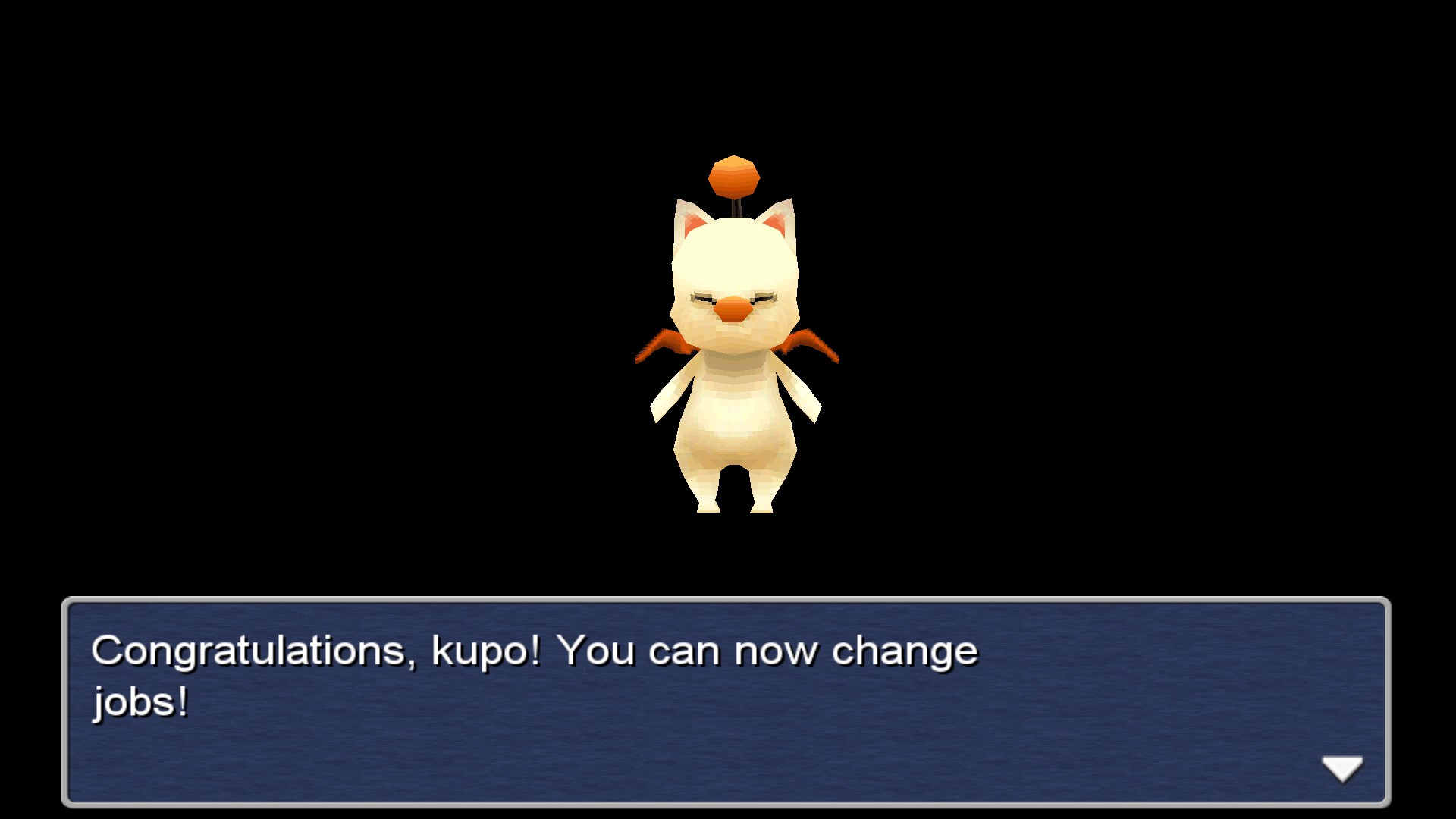 Series staples like Moogles are woven into the game with varying degrees of effectiveness.

Many environments, such as town building interiors are presented isometrically. Flat floating polygons stand-in for detail, and make traditional "walk around clicking 'A' to check for items and secrets" mechanics tricky. As a result, players need only use the zoom feature to zoom the camera in, making a hidden item emit an easy it see twinkle.

Of course, those moments of detecting interesting changes and tweaks won't satisfy those looking for a memorable story.

The PC version comes with a launcher that lets players adjust both resolution and key-mapping. It's also the best way to ferret out the keyboard controls. The game reportedly had some controller issues at launch, but playing with post-launch patches on a few different PCs saw wired 360 controllers work for me without a single issue. While visual and audio quality are substandard, the game ran well, no crashes or freezes or other severe bugs. 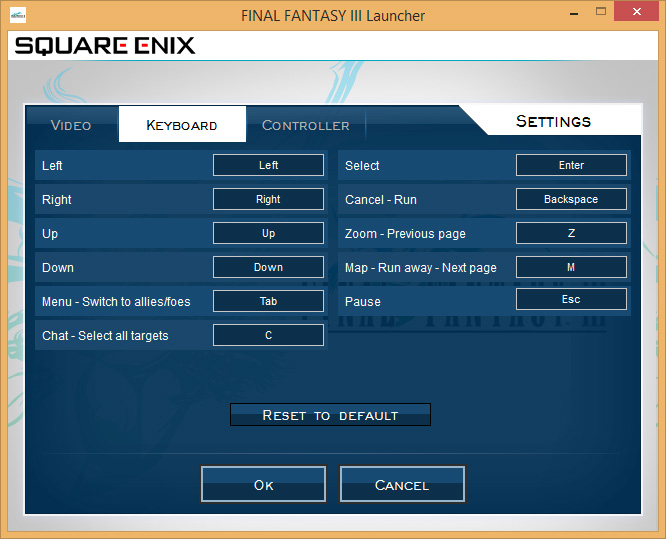 I much prefer using the controller, but the keyboard is operable and remappable. Default keys are the arrow keys, Enter, Backspace, ESC, and Tab with a few lesser functions mapped to M, Z and C.

The Steam Cloud functionality is as appreciated on 'Final Fantasy III' as it is on any game. The PC version also has Steam Cards and some serious, labor-intensive Steam achievements. 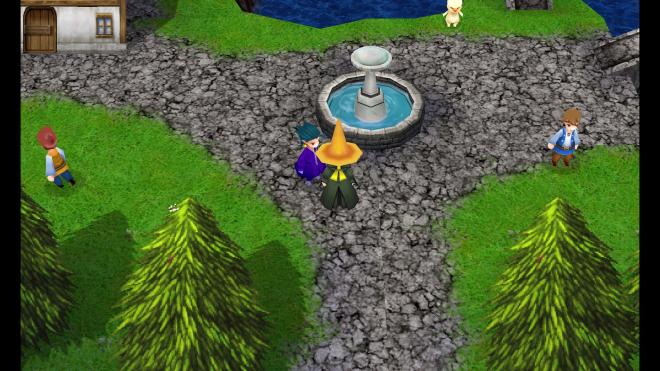 Frankly, this score could be lower. Since I enjoy the 16-bit 2D style of games like 'To the Moon,' this games low-poly, low texture memory, and weak blend approach to 3D visuals is especially not appreciated. I wasn't a fan back in 2006, and blowing the game up on the PC makes for a heap of visual artifacts (even in the UI). Screens like the battle results screen, and dungeon areas where you're compelled to drag your eyes over an area composed of a single poorly tiled and already unseemly texture mean that the game's worst visuals are often just moments away. The shame is that the art design (with emphasis on the character designs which change with changing Jobs) is exactly the style to suit old school 'Final Fantasy' fans. As it is, the environment is the worst. Zoomed-in character faces are beyond unfortunate, and some (but not all) monsters are so lacking in redeemable attributes that they seem like a clear art exercise in minimal rendering expense.

As I stated in the Game Itself section, while the visuals are entirely substandard as PC games go, the gameplay is so demanding and addictive that after playing for a while, my mind was consumed more with strategy and progression than with the Frankenstein monster look of the game. If Square ever elects to revisit what was a grand undertaking ten years ago, the game could be must-own for JRPG fans. 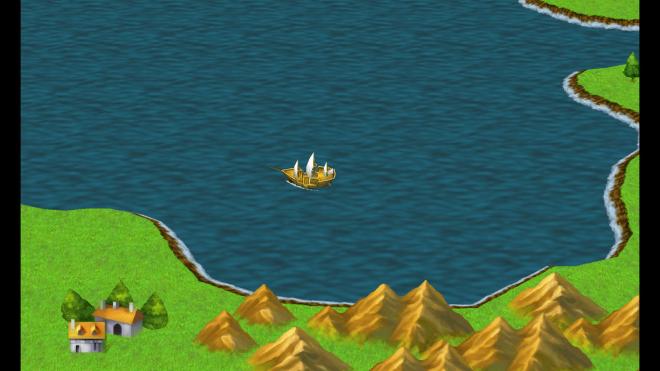 Much like the visuals, the audio was redone for the DS and has now been processed for better than DS reproduction. Still, I found the orchestration style lacking much of the charm that would have been present in 8-bit or 16-bit style synth. While, I'm no abdicate of chip tunes, this game is already a mix of well-worn and less-know 'Final Fantasy' music, and it's missing something to make it cohesive. After trying a few very different PCs, I have to conclude that it can get pretty noisy. Maybe once a three hour session, the noise/distortion is bad enough to direct some bad karma at the game.

This is a long game by any standard, and that's if the player isn't maxing out jobs. With the story so dialed back, it's very easy to pick up and play from session to session. The longevity is where the game's price is most justifiable. 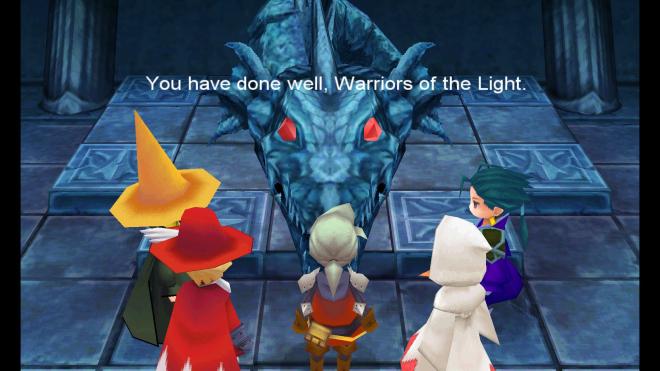 As stated throughout the review, the visuals are extraordinarily homely. The DS to PC path and price will prohibit most from ever trying the game. The game's beginning, while an improvement on the 1990 version, is like to doom it for many that do try it. But beyond that, it's easy to sink hour after hour into the game, embracing its retouched and demanding challenge while celebrating one of the peaks of the early series. And while I found the PC version ugly but addictive, I can't imagine trying to play such a serious game, hour after hour, on my phone, which means the PC version no one would have asked for serves an important function.