Xbox One version reviewed. Frontier's Edge is available as part of the season pass or can be had on its own.  The PC version is also available with the season pass and as single purchase. A version for the Xbox 360 is expected at a later date.

Respawn delivers the second of three planned 'Titanfall' map packs with Frontier's Edge. As expected, three new maps are at the front and back of the package. Dig Site, Export and Haven each may sport pragmatic names, but very well may represent a much-needed mix-up for avid titan pilots. Respawn having so diligently crafted the game's vanilla set of fifteen and delivered fairly well with the first map pack, there's actually a bit of reputation to live up to. Also, shipped alongside 'Frontier's Edge' is the game's fifth free update introducing a burn card black market for those with an affinity for splitting open card packs.

Frontier's Edge, like Expedition, is a no-frills map pack, getting right to the point and bothering very little with bells and whistles. All the work went into the zipping, dashing, wall-running and objective-placing minutia of 'Titanfall' map design, though it seems brief bouts of tunnel vision slipped the team into haphazard indulgence in that minutia. These maps feel more focused on the micro-level, while the macro ideas that propel their overall design are less overtly realized.

That said, only one map really falls victim to the granular focus, while the other two veer closer to a healthy balance on the big and small ideas. Let's start with the bad news. 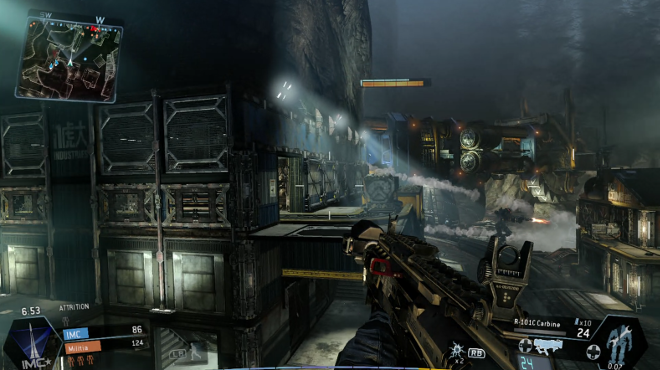 Dig Site is surprisingly pretty, set in a cavernous assortment of rock and machine, lit not by the sun but by work lamps and flood lights. Of course, it's all very futuristic and oversized, fit for titans and pilots alike. Ironically, this is one of the least claustrophobic maps Respawn has put out, opening up much of the arena to titan invasion, favoring widened, more difficult jump routes for pilots instead of the vertical corridor norm. The result, unfortunately, is you're often caught on the ground, at the mercy of the stomping behemoths around you. With the balance between titan and pilots pushed ever so slightly in one direction, it seems, 'Titanfall' can easily devolve into a pretty frustrating experience.

For this reason, attrition plays pretty terribly on Dig Site, but objective modes, which generally concentrate the battles into the few pilot-friendly areas, are easier to swallow. It also helps that the objectives make up for a distinct lack of central signposts. Dig Site looks good, but not one single part is recognizable. Hardpoint features a pretty intriguing middle capture point, demandingly spherical. Capture the flag rewards the best wall-jumpers, for better and worse. 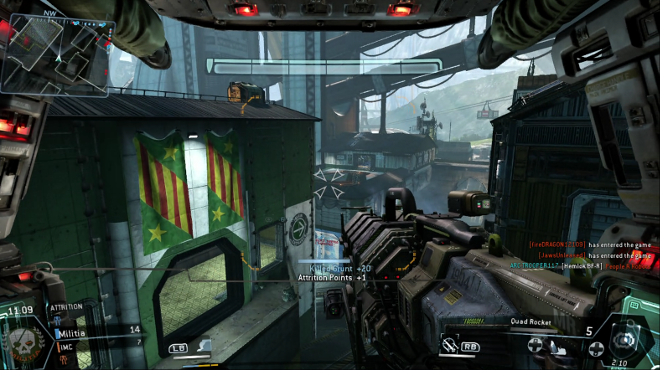 Teams spawn on opposite ends, horizontally, of a subtle, favela-like incline in Export. Diagonally-roofed houses are massive steps leading down to a reservoir at the bottom, while wide staircases allow titans a somewhat clumsy route to tracking enemy pilots. With every roof there's a unique structure below, meaning Extract plays a bit like Angel City on a hillside, this simple conceit resulting in the best map of Frontier's Edge. It's a little disorienting at first, but as you learn to traverse these buildings as a pilot, adjusting for abnormally tall walls going up and thrilling plummets going down, it becomes apparent that Export can be played with just about any loadout and any gun, and won by any kind of pilot. And it's a fresh experience within the 'Titanfall' map set.

The only real downside is a pointless map gimmick, allowing pilots to slink into a building at the bottom of the map, shoot a glowing read column of wires and activate this fatal electric burst along the uppermost row of the entire incline. It creates an artificial focus on this building, generally subverting the pace and flow of any given mode, the worst part being that the upper row of the map is so rarely populated as to ensure devoting time to the glowing red column a waste of time. Players do it anyway, though I'm sure as the sheen wears off so will the desire to shoot the pretty sparkly thing. 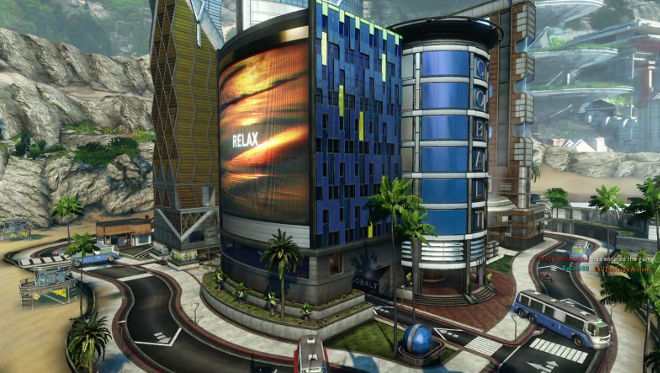 Think of Haven as a jungle-gym surrounded by a massive, titan-friendly running track, with a few cut-ins in-between. Set in a pristine, high-end resort city, it's actually a bit stunning to behold from the outside, as this little model gridlock of futuristic skyscrapers contained by a beach on one side and cliffs on the other. The buildings themselves, as a pilot playground, strain for immediate clarity. The scramble in the middle is usually less about strategy and more about moving fast and aiming faster. On the bright side, titan intrusion, once within city limits, is fairly easy to avoid.

It's an interesting revolt from the common 'Titanfall' map ideal, where, instead of a compressed combination of titan and pilot killing grounds, they're set apart in a still successful blend of the two levels of combat. This is the attrition blowout of Frontier's Edge, though objective modes do just as well. Capture the Flag, especially, compels creative route-finding, and Last Titan Standing never devolves into a cluster of epic proportions. Well, it doesn't until you're the only one left on your team, when it should.

For the bite-sized details of update five, from bug quashes to balancing, head over to Respawn's official post on the matter.

The main thing here is the black market, which makes use of all those burn cards you'd rather not waste a slot on. Dump any burn card and add to your little bank account, then turn around and use that money on burn card packs that emphasize one category – weapons, xp boosts, abilities, etc. – so you're more likely to get the ones you want.

For burn card fanatics (all six of them), this is likely the greatest thing since sliced pilot. For everyone else, it's a nifty little off-time distraction while you wait for the action to start up again. Titan emblems can also be purchased in the black market. So there's that. Keep in mind, absolutely zero microtransactions exist in 'Titanfall,' now and before. It's all in-game currency. Worry not. 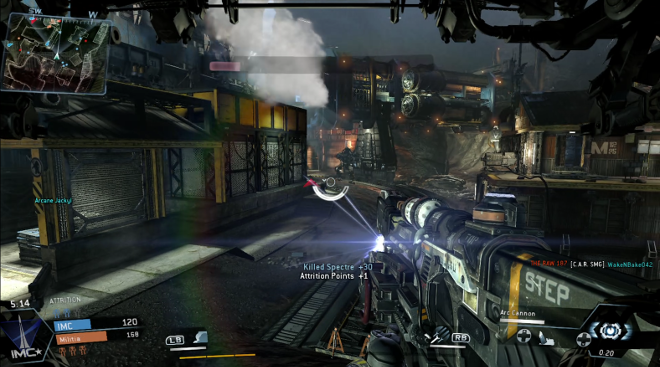 Update five brings with it improvements to the frame rate on both PC and Xbox One, while introducing multi-GPU support for PC players. As an Xbox One player, I can't attest to a dramatic improvement, though the game powered through more taxing moments with greater success. The resolution remains the same.

From a design standpoint, compared to the first pack, there's nothing quite so visually ambitious as either the fog-drenched Swampland or mashed-together War Games, but nothing quite so bland as Expedition's unwanted child, Runoff, either. Dig Site, as I mentioned before, is essentially a night map, and it accomplishes that feeling of darkness without compromising any bit of visual clarity at all. That's an accomplishment, even if the map's overall design is not.

Haven and Export are a bit blander, though each sport their own color palette just separate enough from the norm to keep your eyes interested in the surroundings. Haven, especially, has some pretty cool dogfight background animations going on, while Export's massive windmill thing does little more than remind me of 'Halo 3.' I'll leave that reference out there for the experts. 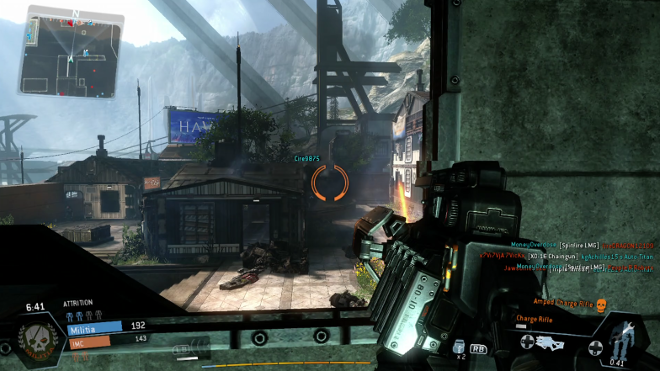 Not much changed or improved here.

Going back to that whole minutia thing from before, all three of these maps beg inspection, evaluation and experimentation, so those willing to put in the time are going to find plenty to dig into. Even Dig Site can be seen more as an expert's challenge than, as I found it to be, needlessly taxing. As the map count raises, the overall replay factor in 'Titanfall' inevitably goes up for players still in on the fight. Frontier's Edge does nothing to abate that trend.

Update five and its black market might be seen as bonus content, though it's free to everyone, not just Frontier's Edge owners. It's a slim package, to be sure. The way Respawn has hunkered down and labored over wall-jumping routes, sight-lines and rooftop cover reminds me a bit of Epic's obsession with symmetry in the 'Gears of War' franchise. They've found what works with the mechanics they've built, so they're just going with it, diving in head first.

The driving concepts of Haven and Extract may be interesting, but once inside you'll find more of what makes 'Titanfall' great, ramped up to a very complicated degree. Dig Site takes this philosophy a bit too far, shaking the titan/pilot balance just too much, though it remains playable, even enjoyable, for expert players. Frontier's Edge may lack overt creative ambition, but the team's unending devotion to intricate, dense, and replayable design remains intact.